We entered the water at approximately 7:00 pm in the hope that darkness had descended for sufficient duration to coax out the nocturnal species. The tidal height differential was a whopping 2 metres and the strong incoming tidal current caught us somewhat by surprise. We groped along the substrate from rock to rock hanging on and trying to find and photograph subjects. The substrate seemed somewhat devoid of sessile invertebrates that would normally provide a diversity of food sources for sea slugs. There are some hydroids supporting the Flabellina and Cratena populations but even they appear less than healthy. Alas, we were disappointed in our quest to record any specific nocturnal sea slugs. In reviewing our images post dive we believe we have sighted a species new to our list. It is one of the variations of Goniobranchus sp. 06 that we are calling Goniobranchus sp. 10. The mantle margin is orange then golden yellow inside of that, especially anteriorly and posteriorly. There is a submarginal band of distinct red spots located on white space. It is somewhat like our Goniobranchus sp. 02 except in that species the spots touch the marginal band that is narrow and just yellow.

Our Historical data:
– 85 surveys conducted at this site since 08/03/2014.
– 219 species recorded by us at this site.
– Almost all of the sightings are regular records for this site.
– Unidentia sp. 06 is a first time recording at this site have first been identified in the Mooloolah River on 13/02/2018. 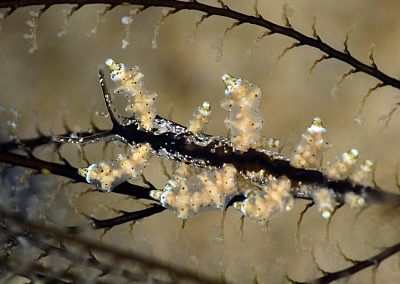 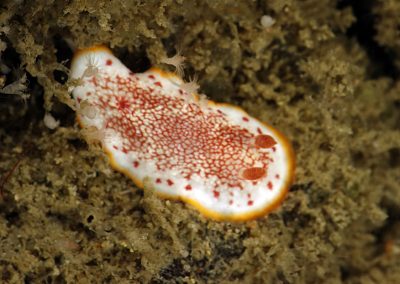