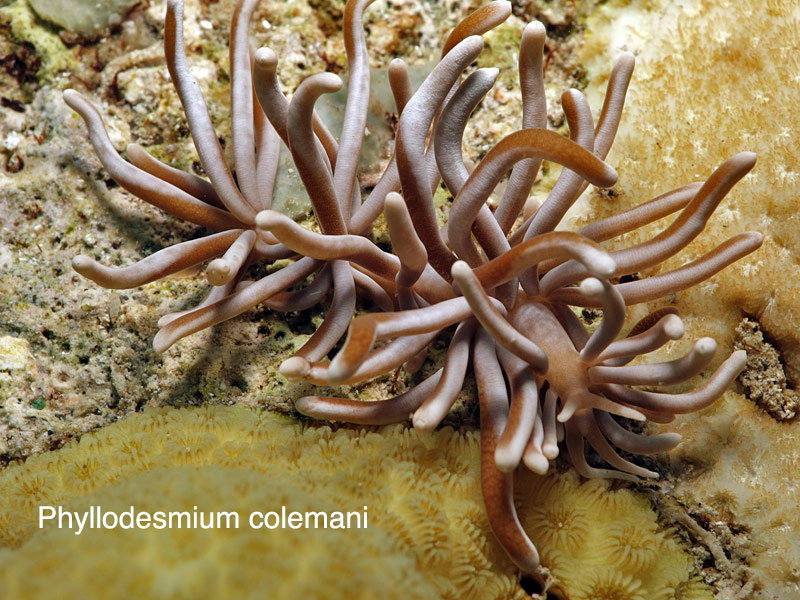 The term cerata (singular: ceras) is most often associated with the processes that arise from the dorsum of the Aeolidina – the aeolid nudibranchs. However, it is also commonly applied to the processes found on the dorsum of some of the Sacoglossa sea slugs such as those of the Caliphyllidae, Hermaeidae and Limapontiidae families (everyone knows ”Shaun the Sheep”) even though they have evolved independently through a different lineage. The literature also, from time to time, refers to the dorsal processes of the Dendronotina and many of the Arminina as cerata although in the Dendronotina the terms branchial plumes or secondary “gills” are used more frequently. 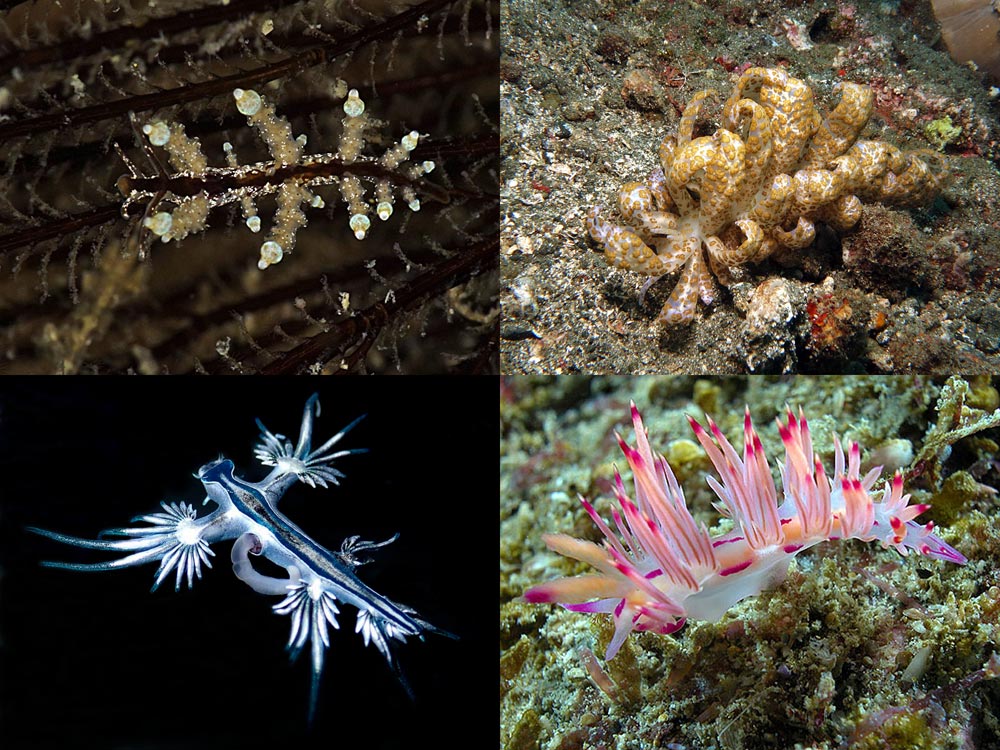 Some examples of the cerata found in Aeolidina (aeolid) species. Clockwise from top left:
Eubranchus sp.10 (Fionidae) – inflated cerata with cnidosacs at the tips.
Phyllodesmium longicirrum (Facelinidae) – large flattened cerata with the packets of hosted zooxanthellae visible.
Flabellina lotos (Flabellinidae) – cerata are clustered in rows laterally on the notum with the digestive tube and cnidosac visible.
Glaucus atlanticus (Glaucidae) – four clusters of cerata on each side, the three anterior pair situated on a peduncle with all four pair mulitseriate and radiating in a fan-like manner. (This excellent image by kind courtesy of Julie Schubert.) 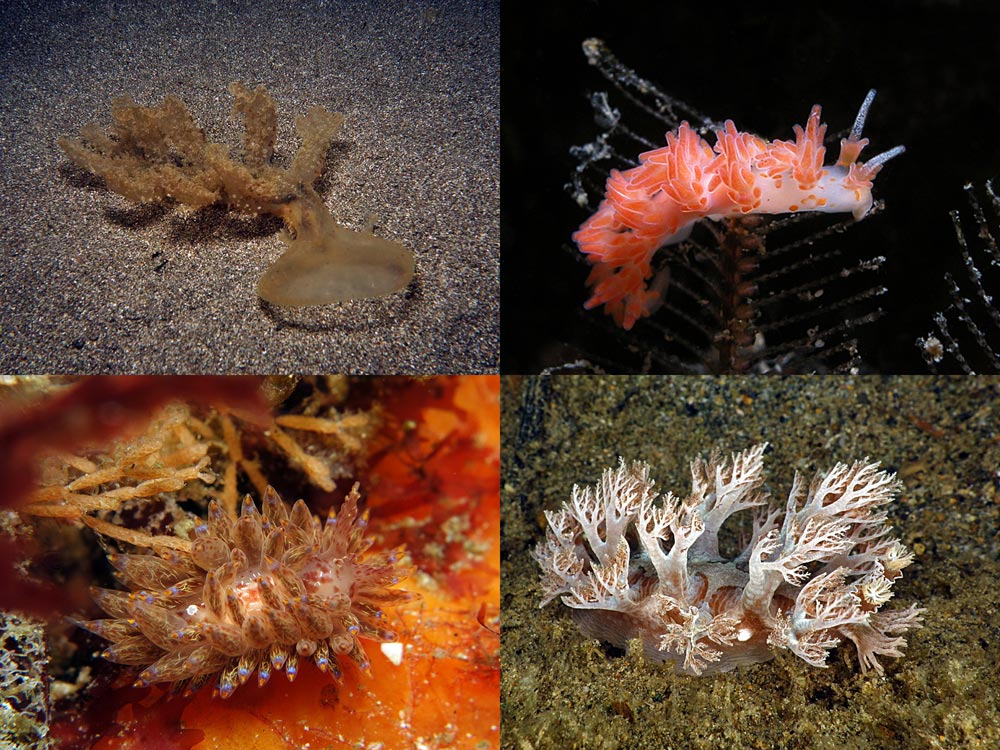 Some examples of cerata found in Armina and Dendronotina (non-aeolid species of cladobranchs). Clockwise from top left:
Melibe viridis (Tethydidae) – This Dendronotina nudibranch has large paddle-like cerata carrying fine dendritic gills, lacking cnidosacs but can be autotomised to distract a predator.
Doto rosacea (Dotoidae) – the cerata carry rows of nodules in circlets and lack cnidosacs.
Marionia sp. (Tritoniidae) – the greatly elaborated finely branched cerata act as secondary gills and do not possess cnidosacs.
Janolus sp. (Janolidae) – Possesses numerous fusiform cerata that continue anteriorly around the head, are penetrated by the digestive gland but lack cnidosacs. 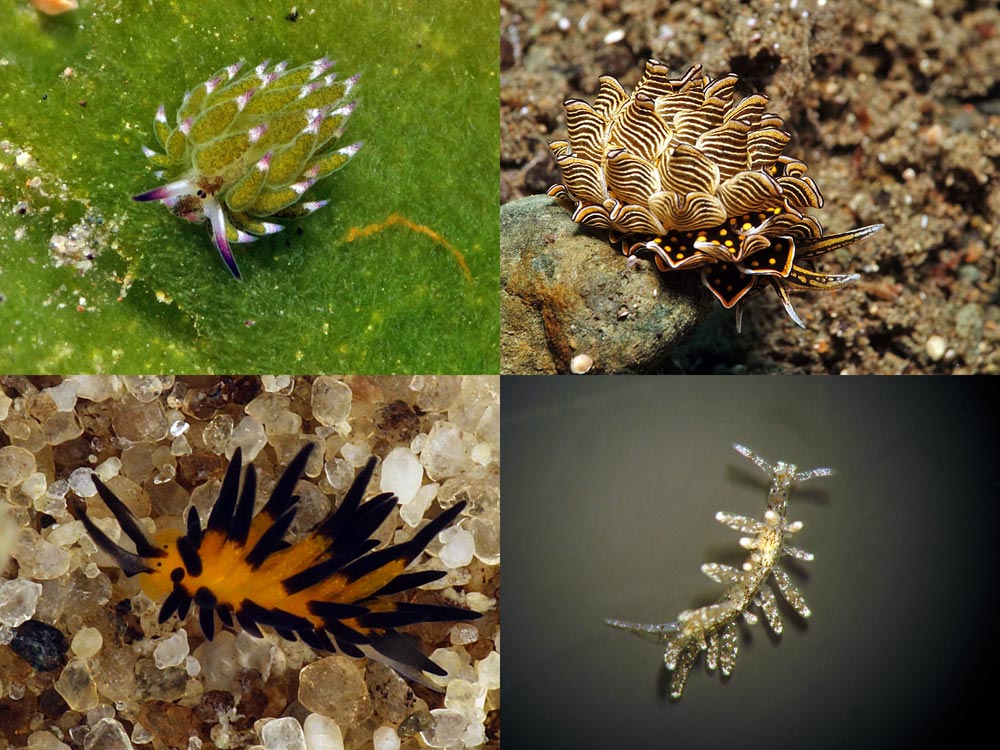 Interestingly, among the Doridoidea – the dorid nudibranchs, there are some genera, namely Cadlinella and Ceratophyllidia for example, whose members have distinctive cerata-like processes on their dorsum, but these are referred to as tubercles or papillae rather than cerata. In the former the processes are not autotomised but in the latter they are, and have also been reported to expand and contract. Other dorid nudibranchs with distinctive “non-ceratal” dorso-lateral processes include Okenia – Goniodorididae family and Kaloplocamus, Plocamopherus, Limacia and Crimora – Polycerididae family. There is a paucity of information in the literature on the internal anatomy of these non-ceratal processes, but none receive branching from the digestive system and neither are they believed to play any major role in respiratory function. Some however are known to possess concentrations of spicules or glands containing noxious or repugnant compounds and some can be autotomised, both indicating they may have developed for defensive purposes. Not included here, of course, are all of those species that have specialised processes for the protection of rhinophores (extrarhinophoral processes) or gills (extrabranchial processes). 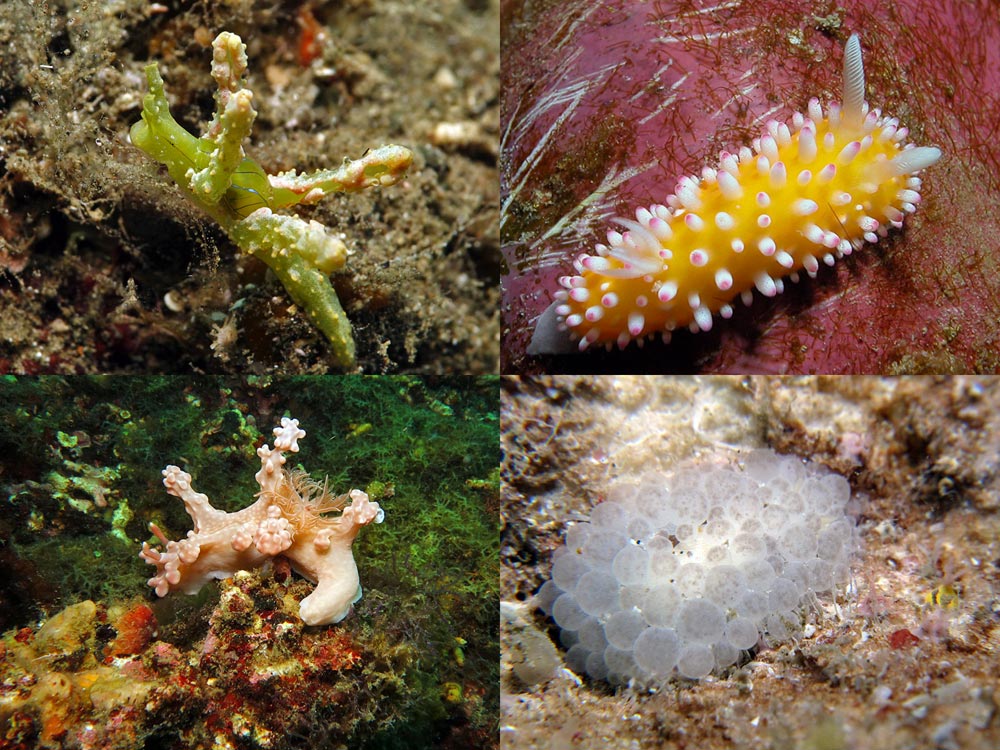 Some examples of species possessing non-cerata appendages. Clockwise from top left:
Lobiger viridis (Oxynoidae) – this shelled sacoglossan has long appendages but they are elaborations of the parapodia (lateral extensions of the foot).
Cadlinella ornatissima (Chromodorididae) – the dorsum is densely covered in papillae that cannot be autotomised.
Ceratophyllidia sp. 01 (Phyllidiidae) – the dorsum is crowded with stalked, spherical papillae that are capable of swelling or deflating and can be autotomised.
Miamira alleni (Chromodorididae) – this species bears large protective outgrowths, particularly for the gill, some of which contain defensive glands.

Early descriptions of the aeolids (eolids) referred to their dorsal appendages as dorsal or branchial papillae. According to Herdman, 1890, the term cerata was introduced for them by Lankester, 1875 in his Mollusca article in the Encyclopaedia Britannica. Lankester did not invent the word, which is of Greek derivation meaning “horn”, the word having long been in use to describe the antlers (horns) of deer etc. Lankester however did not reserve the term for those processes that we today call cerata but rather used it broadly to encompass all “…papillae or ‘cerata’ of the dorsal integument….”.

Generally speaking most cerata are thin-walled elongate (finger-like or otherwise) outgrowths of the dorsum, are haemolymph (blood and lymph fluid) filled and also receive a branch from the digestive system. Branches of the digestive gland may also penetrate the cerata in certain species of Sacoglossa its presence or absence there varying even within families. In those Sacoglossa, Dendronotina and Arminina species that do possess cerata however, some only have the branches of the digestive system penetrating as far as the base of each ceras while in others it penetrates the entire length.

The cerata of the Aeolidina could be considered the apogee of ceratal development. The various functions attributed to them far surpass any other anatomical feature with regards to diversity of roles. These are: gaseous exchange, receiving a branch of the digestive system, hosting and “farming” of zooxanthellae, storage of digested products, modified for reproductive assistance (though rarely so), acting as a “heart” (also rarely so) and a number of defensive applications, including autotomy, deimatic display, nematocyst storage and deployment, a number of defensive glandular secretions and host mimicry. 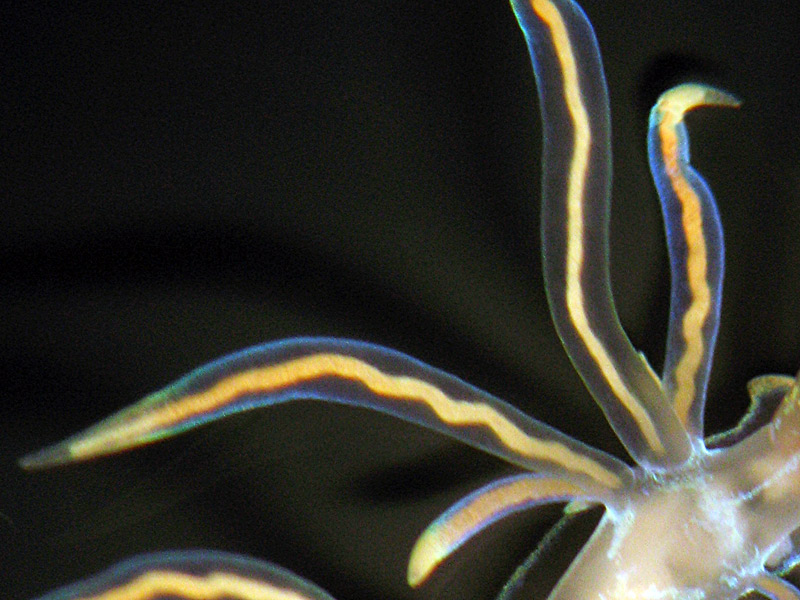 Close-up view of some of the cerata of the aeolid Phyllodesmium acanthorhinum showing them clustering as a group, the attachment to the body and the internal digestive branch penetrating each ceras up the centre but lacking a cnidosac at the tip.

The functions discussed in the following parts are those ascribed generally to the Aeolidina. Rudman, 1981 comments: “The cerata are the hallmark of an aeolid. Although similar dorsal outgrowths of the body are found in other opisthobranch groups such as the sacoglossans, arminids and dendronotaceans, in no other group have they developed to such a degree. They have a major role to play in the animal’s defence and also in the efficiency of its metabolism.”

(Note: where an sp. number is used in this NudiNote it refers to a species shown on this site.)

– Herdman, W. A., (1890). On the Structure and Functions of the Cerata or Dorsal Papillae in some Nudibranchiate. Mollusca. Quarterly Journal of Microscopial Science 31: 41-63.

– Rudman, W. B., (1981). The anatomy and biology of alcyonarian- feeding aeolid opisthobranch molluscs and their development of symbiosis with zooxanthellae. Zoological Journal of the Linnean Society 72: 219-262.