FOUR AND MORE INTO ONE – Variation in Miamira moloch 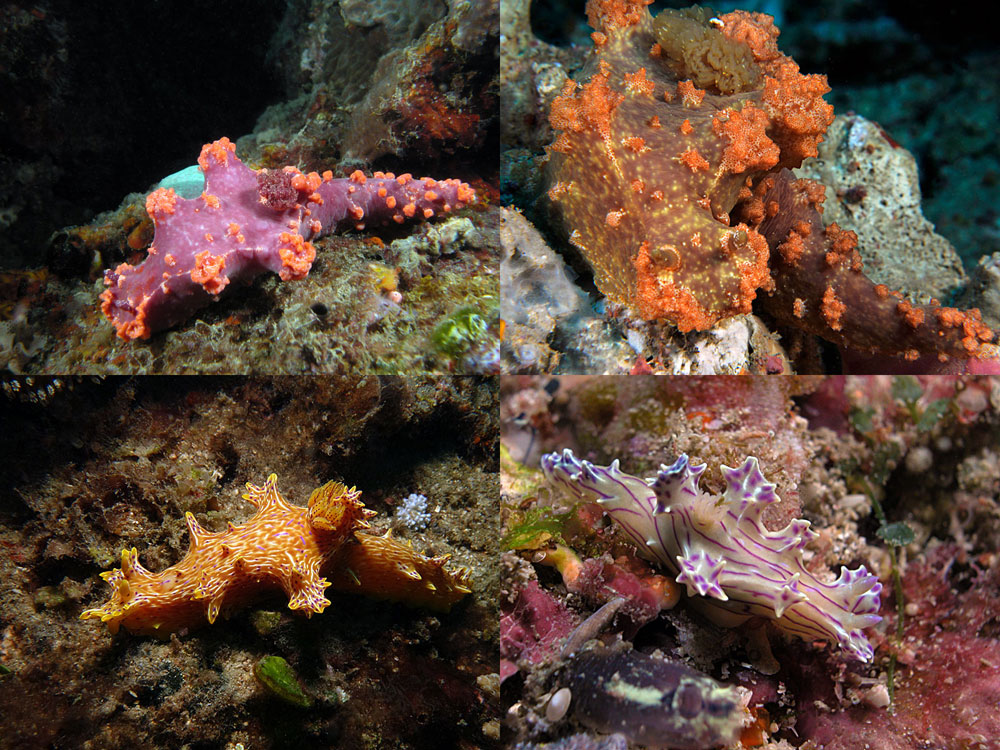 Miamira moloch is a large to very large nudibranch of the Chromdorididae Family. It was first described as Ceratosoma moloch in 1988 by Rudman from two specimens, one collected from Heron Island, Central Queensland and the other from North Stradbroke Island, Southern Queensland.

At first glance the specimens in the above montage all appear to be too different to be the same species. However, to quote taxonomist Dave Behrens: “When identifying nudibranchs it is always best to look for consistencies rather than differences.” Dave has also commented: “Some species show an amazing degree of variation. Miamira moloch may be one of those.”

It is easy to see by the overall general shape that they all belong to Ceratosoma/Miamira#.

What are the similarities? They all have three tuberculate lobes on both sides of the body. These protrude from the lateral ridge that is the remnant of the mantle skirt. One pair is located each side of the head, another halfway between rhinophores and gill while the third, and largest pair, just anterior to the gill. There is another lobe, situated just posterior to the gill, on the centreline, that curves up behind in the manner of a protective horn. This posterior arching lobe also marks the posterior termination of the mantle. All lobes carry tubercles at their terminations. There are also scattered tubercles on the mantle, body and a denser concentration on the tail. (There are at least six described species of Ceratosoma/Miamira with two or three lateral lobes and a posterior gill horn although all, apart from Miamira moloch, have a smooth dorsum and body.) 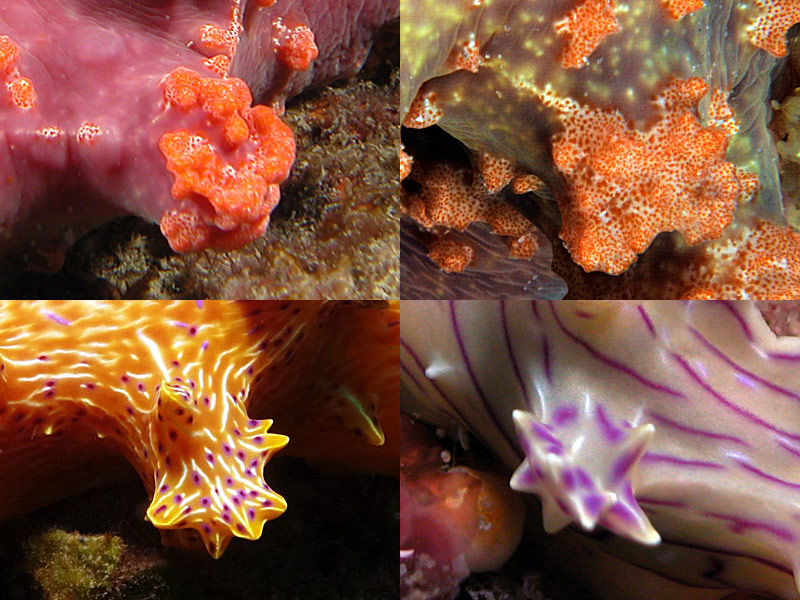 A close-up montage of the tuberculate lobes and mantle colouration, placed in the same order as the main pic for comparison purposes.

What are the differences? The specimens in the top row of the montage have different mantle and body colour to each other. In each instance though, the rhinophores and gill colour matches the mantle colour of each. The lobes also match the mantle colour in each case however the colour of the tubercles, a white background with orange spots, and their shape are the same for both specimens. Both specimens in the bottom row have pointed, “spikey” tubercles on the lobes, mantle and body as compared to the rounded tubercles of the top row. Also, the lobes and tubercles are coloured and patterned the same as the mantle. The top row has a mottled appearance to the mantle whereas the bottom row has contrasting stripes or lines. Rudman, 2000 states: “…the tubercles thicken up and become quite rounded – a bit like encrusting coralline algae – when this species reaches about 120mm in length.” Coleman, 2008 also suggests that as the animal grows in size the spikey ends to the lobes  “….fuse into lumps.” This would infer that the smaller specimens with “spikey” tubercles, as in the bottom row, grow into the larger specimens with knobbly tubercles and also take on a different mantle presentation, as in the top row. I have not seen any intermediate forms, so I am unable to confirm this view.

A number of other presentations have also been recorded across various Indo-Pacific localities. An interesting point is that these four variations of Miamira moloch, shown above, were all photographed at the Gneering Shoals and Mudjimba Island on the Sunshine Coast of Southern Queensland, an area of only 16 square nautical miles.

It will be fascinating to know the results of any future molecular sequencing of the various forms of this species given the differences presented in these specimens and all being from the one small geolocation.

# [The molecular sequencing of the Chromodorididae family in 2012 removed some species from Ceratosoma and placed them in Miamira. Four of the described Ceratosoma species sequenced, clustered separately from the other Ceratosoma species and were placed in Miamira genus. Whilst Ceratosoma moloch was not actually sequenced at that time, it is now a hypothesized member of Miamira.]