GIVING THE FINGER – The siphon of gastropterids 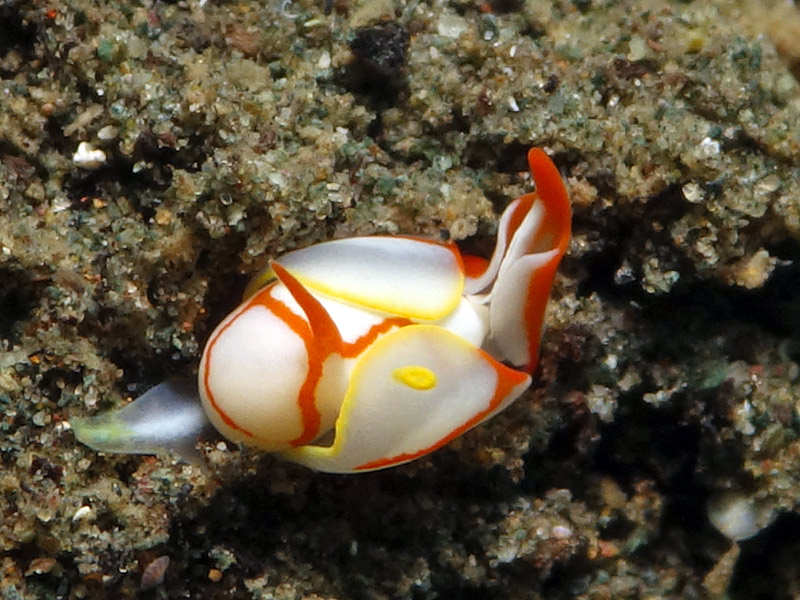 The Gastropteridae are cephalaspideans or head-shield slugs. It would appear that their “main claim to fame”, bright and dramatic colouration of many aside, revolves around the ability and propensity of many to swim by flapping their parapodia. This behaviour has led to them receiving the common name of “bat-winged slugs”. Behaviour, especially one so demonstrative as swimming, particularly among sea slugs, was always going to be the most spectacular feature and thus dominate attention. However, I’m more intrigued by an anatomical feature – the presence of the single medial siphon on their head-shield. 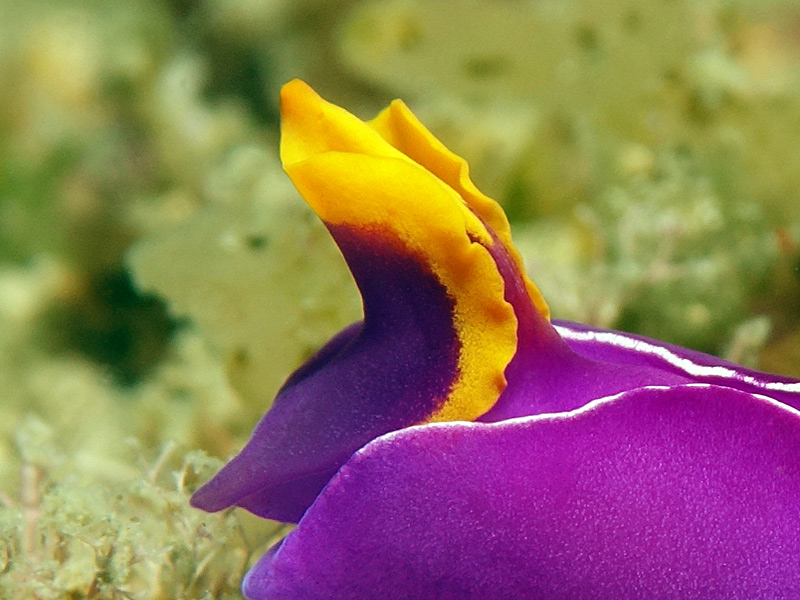 Sagaminopteron ornatum – A close-up view of the anterior siphon formed by the headshield enveloping the dorso-medial crest.

Most of the Gastropteridae sea slugs possess an anterior midline siphon formed by the tapering posterior portion of the head-shield tipping vertically or arching forwards and the edges curling inwards towards each other forming a funnel/siphon. In the Sagaminopteron and Siphopteron genera this siphon is supported by a dorso-medial crest running up through, and often extending past, the siphon tip. In many the siphon is brightly coloured and the tip of the protruding crest carries a contrasting bright colour. 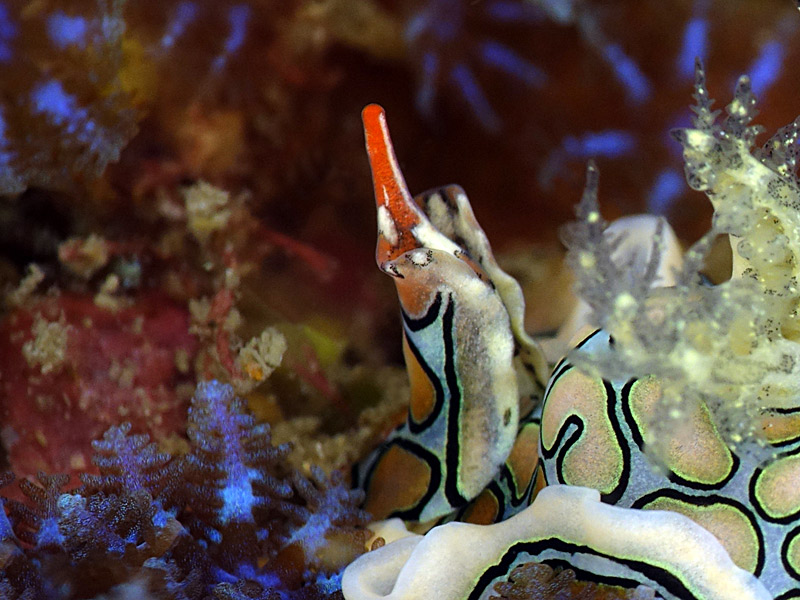 Sagaminopteron psychedelicum – A close-up of the dramatically patterned and coloured siphon. The dorso-medial crest of this species projects significantly above the edge of the siphon proper.

Just what is the function of this arrangement? Currently in the literature there appears to be no report of any histological investigation on this structure to definitively assign a function. There have however been a couple of suggestions that it most probably functions as a chemosensory organ. The appearance is not unlike the head tentacles (“rhinophores”) of the Umbrella-shell Slugs (Umbraculoidea) and the Sea hares (Anaspidea) except that in the Gastropteridae it is not a bilateral arrangement but a single midline structure. If we examine the gross anatomy we may be able to hypothesise its function. 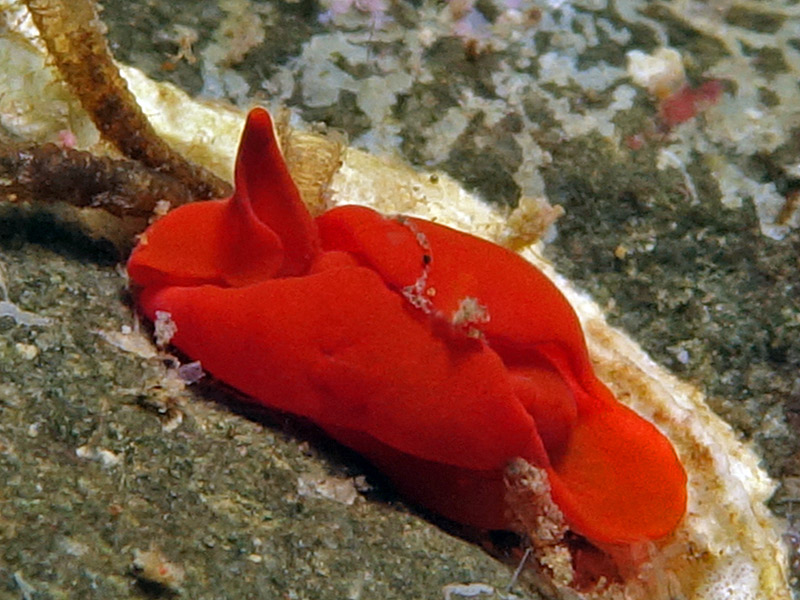 Siphopteron sp. – A uniformly coloured species. The dorso-medial crest dominates the anterior siphon in this species.

Location: The anterior dorsal location situates it perfectly for testing of chemical cues that may have arrived from ahead. Being on the head and located over the major nerve ganglions can only help with signal pathways and also coordination of signals from other sensory organs – the anterior edge of the headshield (and its tentacular corners if present), Hancock’s organs located both sides in the lateral grooves formed between the head-shield and foot and the closely situated eyespots.

Presentation: The manner in which it is held aloft in the water column or jutting forwards, that is, presented to the environment, also increases water sampling ability.

Shape: The folding of the head-shield serves to increase surface area and slowing down of water flow the better to allow bonding of chemical compounds with any receptors for same. The funnel shape serves to better direct that water flow over any receptors. The mid dorsal crest possessed by some could provide yet more surface area for detection and stiffen the siphon against unwanted deflection or closure in currents and surge. 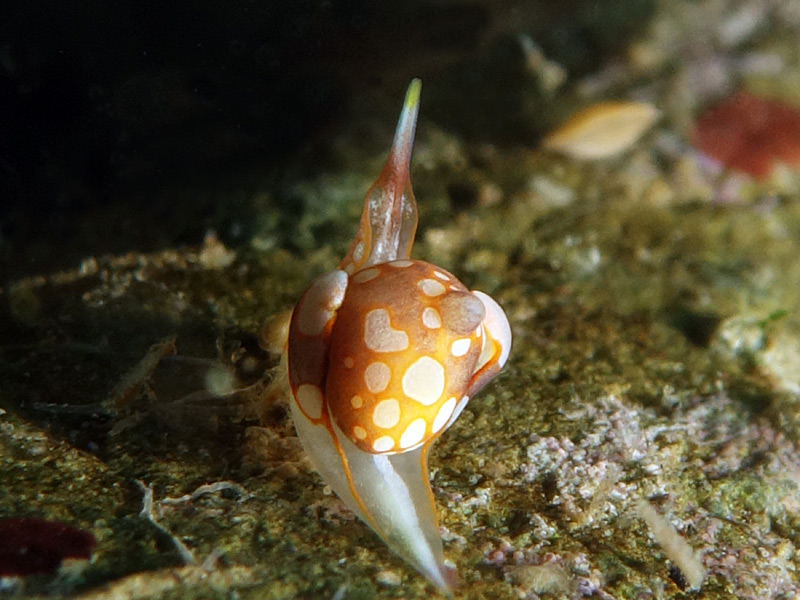 Siphopteron ladrones – A view from the posterior aspect serves to illustrate how the anterior siphon and its crest tests the water column.

All of these elements, especially in combination, suggest an at-a-distance chemosensory function not unlike the cephalic tentacles and rhinophores of other sea slugs and nudibranchs. Frustrating as it is however, as in all science, this is just a strong hypothesis until proven beyond question. In the meantime I’m getting the impression that they are just giving me the finger.

– Gosliner, T. (1989). Revision of the Gastropteridae (Opisthobranchia: Cephalaspidea) with descriptions of a new genus and six new species. The Veliger 32: 333–381.