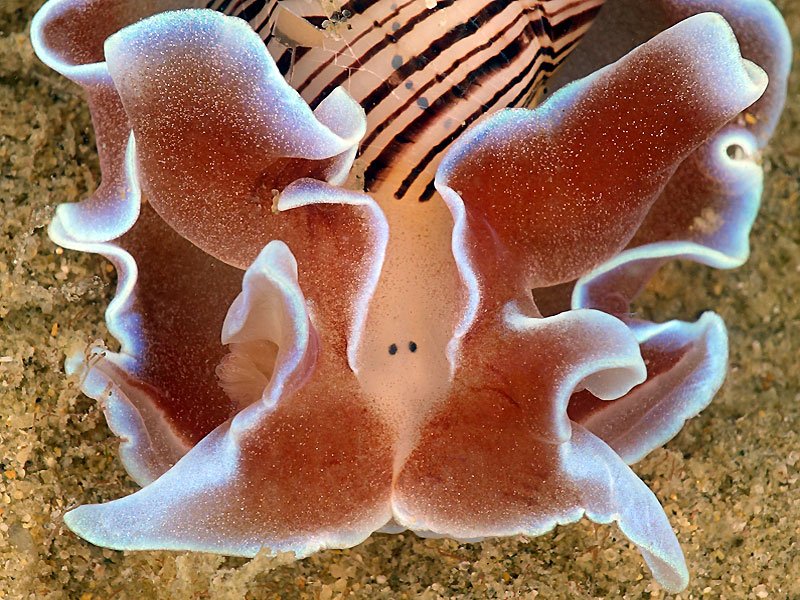 We all know about the rhinophores of the true nudibranchs – those highly developed chemical-detecting “antennae” located anteriorly on their “head”. Even sea slugs other than the true nudibranchs such as the sea hares, and the side-gilled pleurobranchs have rhinophores. These though are tubes formed by longitudinal rolling rather than the solid form of the true nudibranch rhinophore. The sap-sucking sacoglossans also possess rolled head tentacles that are positioned and act similarly but these are not considered to be homologous with the rhinophores. All of these, regardless of origin or configuration, are highly visible and exposed sitting on the top of their head above the cerebral nerve ganglion. But there are sea slugs that do not possess rhinophores so they must have some other means of detecting and recognising the necessary chemical cues to navigate life, finding food and a mate and avoiding predators, for all life produces and releases chemical compounds either intentionally or as a by-product of their mere existence. 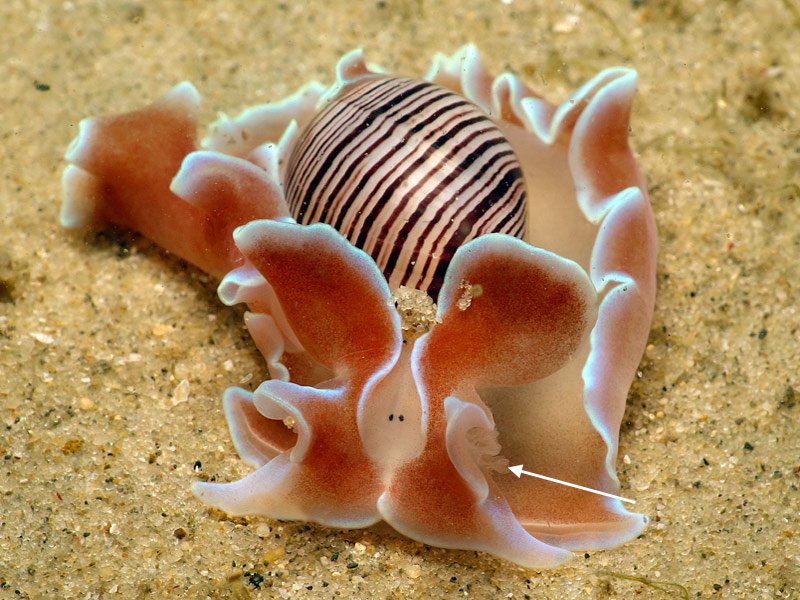 The anterior aspect of the sea slug Hydatina physis with the arrow indicating its left side Hancock’s organ underneath the head-shield process. In this species it is organised as a row of deep folds, each of those folds being individually innervated.

Most of the bubble-shells and sea slugs of the Acteonoidea and the Cephalaspidea orders possess concealed chemo-sensory structures called Hancock’s organs. These are located on each side of the head region most usually positioned in the groove between the foot and head-shield processes, well out of sight and protected because many of these species live a burrowing lifestyle. In this position, although not “up and out there” like the rhinophores, they can sample the water flowing over and past the head as the animal moves forward and, just like the rhinophores, they are sensory organs that operate on distance reception telling the animal what might lay ahead by analysing the chemical molecules in the water that may have arrived from afar. Their location however makes them a difficult photographic subject. 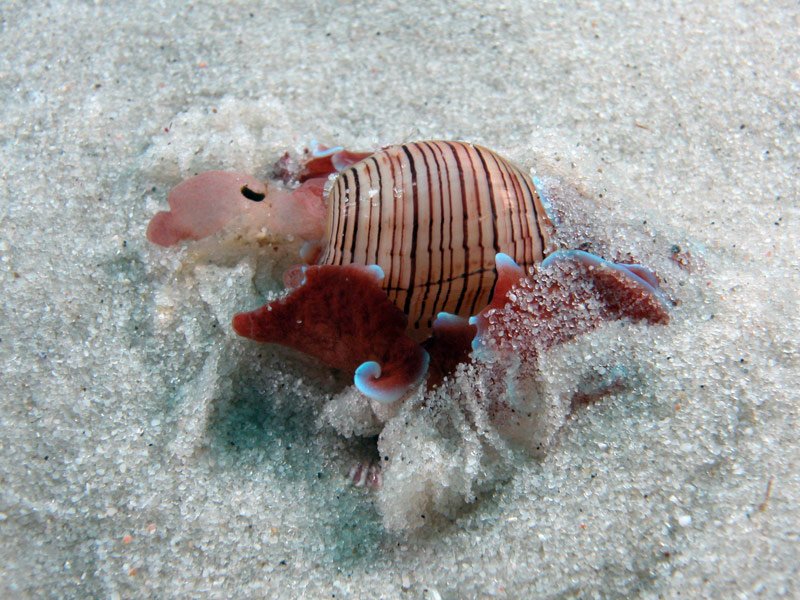 A burrowing specimen of Hydatina physis illustrating why the Hancock’s organs lie protected beneath the headshield processes.

The presentation of the Hancock’s Organs varies greatly. They may be just a simple flat disc with a roughened surface, plain folds or wrinkles of epithelium or a quite well-developed plicate structure not unlike a gill in appearance. Whatever their shape they too, just like the rhinophores, are well supplied with nerve branches from the cerebral ganglion. All the folds and branching of the well-developed types serve to both increase the contact surface area for testing and also to slow down the water current so that the molecules in the chemical soup that is sea water can more readily bind with the surface receptors for recognition. To assist in this testing some species have developed their headshield processes not only to protect but to control the flow of surrounding water, with some even developed into funnels the better to direct the oncoming water flow over each Hancock’s organ. By having one on each side of the head some direction finding ability is thought possible when reception is combined with head positioning to ascertain differential of concentrations and thus a possible direction of the source. 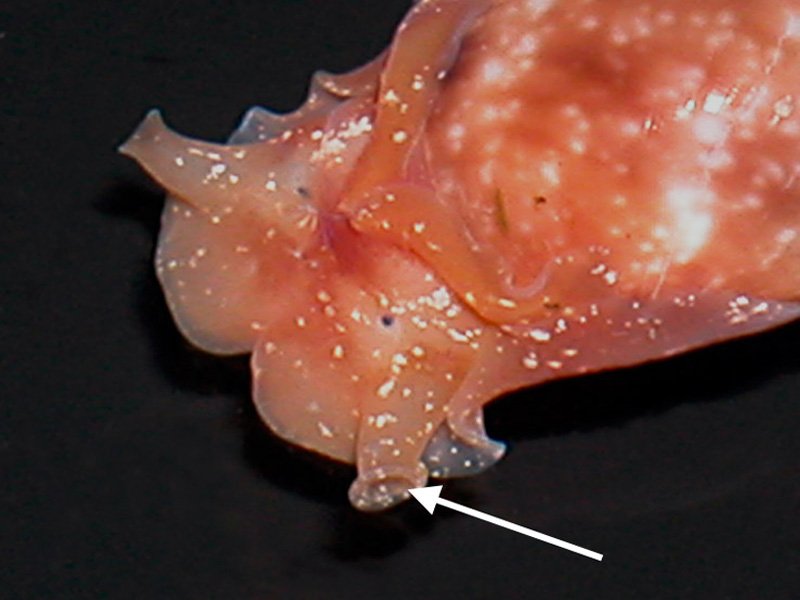 Bulla vernicosa has the head-shield processes formed into funnels to better direct and control the water flow over the Hancock’s organs underneath.

Hancock’s organ is named in honour of the discoverer of its function, Albany Hancock, a noted taxonomist of the 19th century who is most remembered for the great work: A monograph of the British nudibranchiate Mollusca, that he co-authored with Joshua Alder. In 1852 he published a paper explaining that the true function of these organs was sensory and not salivary as was then believed. The use of the term Hancock’s organ, or organ of Hancock, originally applied to the whole sensory region – the anterior portion that is involved with tactile-sensing and the posterior portion that is involved with chemo-sensing. Modern usage has seen Hancock’s organ restricted to the posterior portion concerned with the at-a-distance chemo-sensing aspects only. The anterior portion, referred to as the “lip organ”, in it’s forward position is ideally located for making actual contact (tactile sensing) with the substrate or growth thereon. The two portions are supplied by different cerebral nerves. 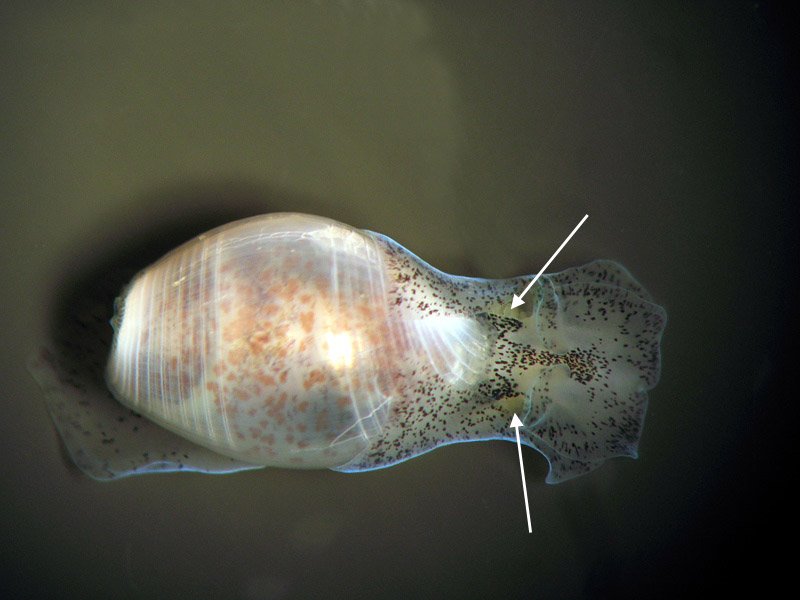 Atys semistriatus also has Hancock’s organs organised into folds. The left can be seen through an opening between the head-shield process and the parapodium while the right is visible through the transparent flesh. 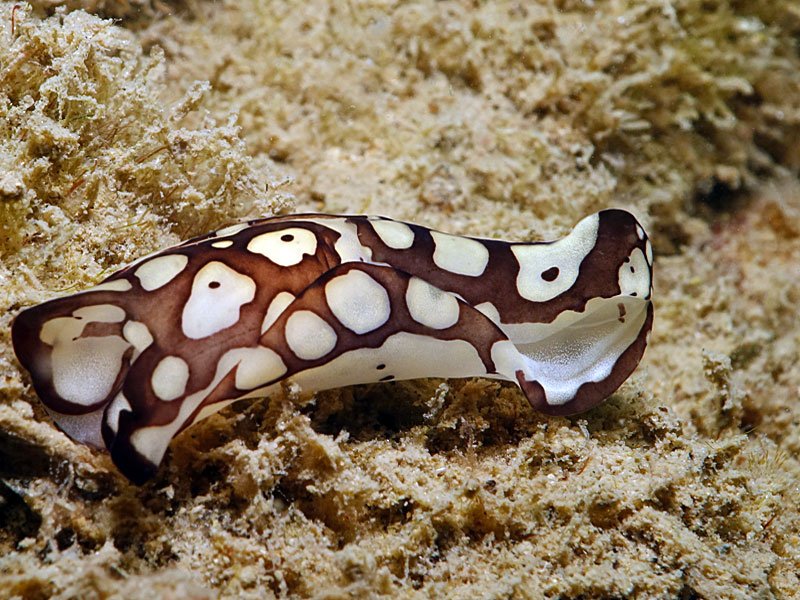 The Aglajiade family also have Hancock’s organs. Here, Philinopsis pilsbryi when on the move is seen to open up the gap between the head-shield and parapodium – the lateral extensions of the foot – (at right) allowing water to flow over the Hancock organ for testing.

The primitive shelled sacoglossans have a similar organ but consensus on whether it is homologous has not been reached. There has been much discussion also on whether the true rhinophores are derived from the Hancock’s organs and the most recent research seems to support that theory.

– Rudman, W. B., (1972). The anatomy of the opisthobranch genus Hydatina and the functioning of the mantle cavity and alimentary canal. Zoological Journal of the Linnean Society, 51: 121-139.

– Klussmann-Kolb, A., Croll, R. P. & Staubach, S., (2013). Use of axonal projection patterns for the homologisation of cerebral nerves in Opisthobranchia, (Mollusca, Gastropoda). Frontiers in Zoology, 10:20.

– This NudiNote has been modified from a previously published article in Dive Log Magazine’s – NudiNotes Column, Issue: #382 (June 2020): 15 by David A. Mullins.