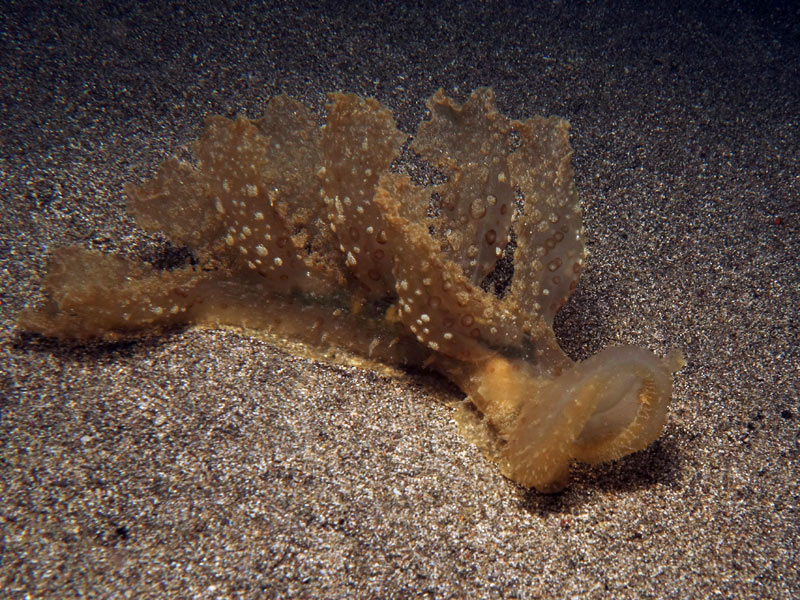 In this NudiNote on sea slug feeding we look at those that are hunters, those sea slugs that actively track down their mobile animal prey as opposed to the majority of sea slugs that are consumers of sessile, attached (or drifting) prey. Rather than grazing on sponges, ascidians, bryozoans, corals or hydroids that are encrusting or fixed in place they are on the hunt for and stalking independent, non-colonial animals that are able, just like the sea slugs themselves, to move about, relocate and take avoidance action if attacked. There is a separate NudiNote though, dealing with those hunters that are specifically slugivores – the sea slugs that are predators on other sea slugs.

Echinoderms would seem to be a most unappetising meal especially the likes of brittle stars, seemingly all rough and horny exterior with spines and little flesh. However, a number of fish, crabs, shrimps and even their own close relatives, the sea stars, prey upon them. They are nocturnal animals mostly hiding under rocks, old coral plates and in crevices during the day moving off swiftly using their five (usually) flexible arms in search of alternate cover when disturbed and exposed. If a predator manages to grab an arm the brittle star can promptly autotomise (deliberately cast off) that arm in an attempt to escape, eventually growing it back from the remaining stub. There is also a sea slug that hunts and consumes brittle stars – the nudibranch Kalinga ornata. Kalinga ornata is well-adapted for living in the soft sand/silt and also has a series of over a dozen well-developed oral tentacles fanning out anteriorly for testing the sand ahead for indications of prey. It hunts at night when the brittle stars are most likely to be out and about feeding themselves. It is not known if their diet is exclusively brittle stars or whether they are opportunistic feeders on other prey such as small crustaceans as well. There is also evidence (stomach contents) that large mature specimens of Plocamopherus tilesii, usually known to consume bryozoans, may prey on brittle stars, but whether this is just a by-catch situation has not been established. 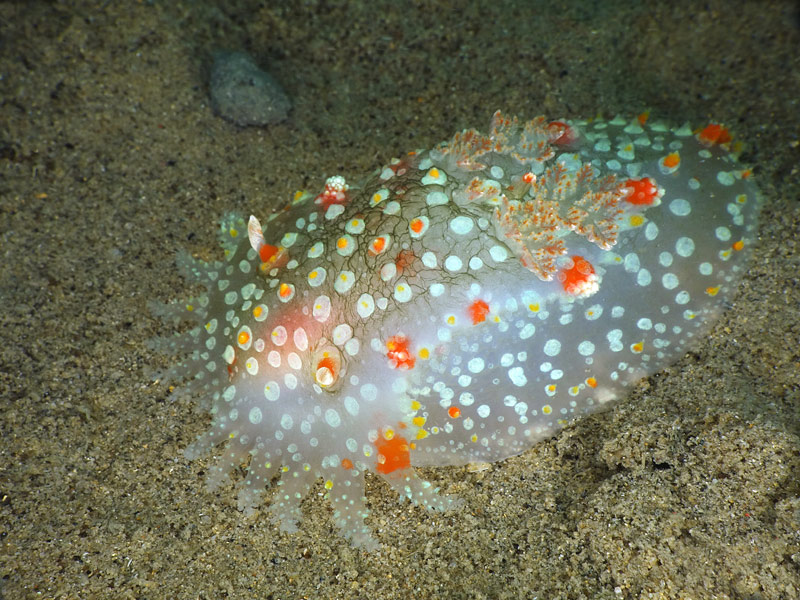 The reclusive Kalinga ornata, of the Polyceridae family, is known to eat brittle stars nocturnally. Note the many anterior sensory papillae.

Polychaete worms and polyclad worms of the phylums Annelida and Platyhelminthes respectively, are the two major marine worm types to consider here. The polychaetes are the bristle worms having a long segmented body with parapodia on the side of each segment and bristles (chaete) projecting from those. Although there are many many species of worm most sea slugs have a quite narrowly defined diet. The cirratulid polychaete worms are a target group for many of the carnivorous bubble shells some examples being the well-known Hydatina physis and Micromelo undatus of the Aplustridae family, Bullina lineata of the Bullinidae family and Japonacteon suturalis of the Acteonidae family, all belonging to the Acteonidea order. Some cirratulid worms construct tubes of calcium carbonate into which they retract for protection however, the extremely long oral tube possessed by the attacking bubble-shell sea slug can be everted down the tube to extract the essentially trapped worm. The most “primitive” of the shelled sea slugs are the Ringicula species of the Ringculidae family with their thick and solid shell and although not a great deal is known about their diet some are known polychaete predators. The headshield slugs of the Cephalaspidea order have members that eat polychaete worms as well. These include some species of Philinopsis, such as Philinopsis gardineri, being a good example. The minute and gill-less Vayssierea species of dorid nudibranchs, often seen on the underside of intertidal rocks or algae fronds, consume polychaete tube worms, Spirorbis sp. They are obvious as small orange spots amongst the white calcareous tubes of their prey. 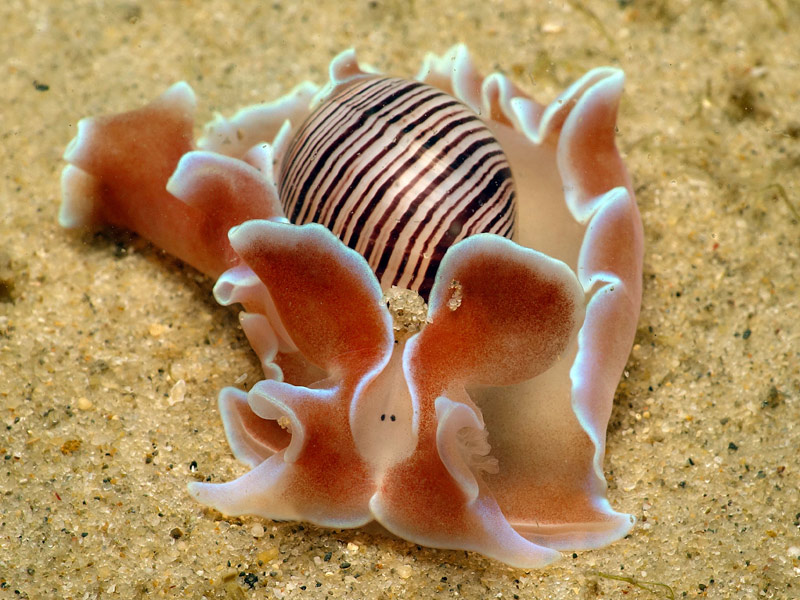 Pretty to look at but deadly to cirratulid polychaete worms Hydatina physis hunts on top of and through the substrate. 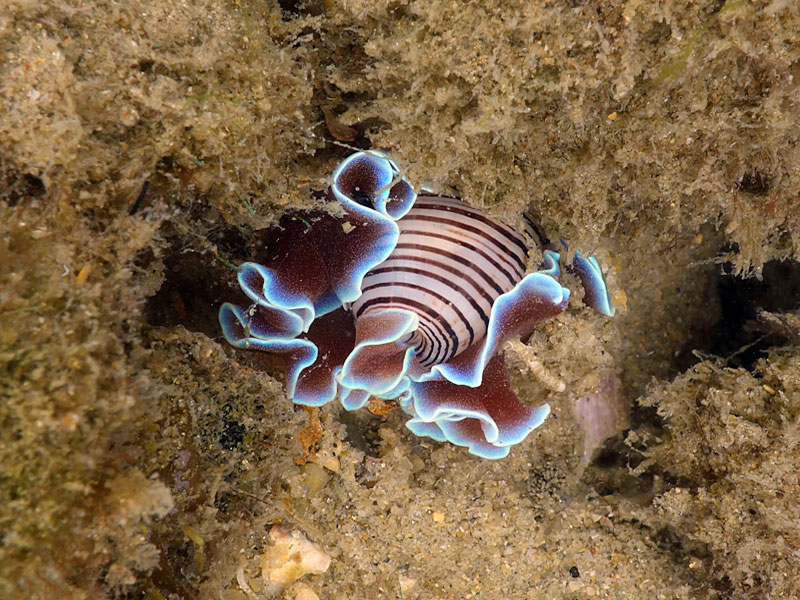 Here Hydatina physis has its head buried in the silt most likely having sensed, and now extracting, a polychaete worm. 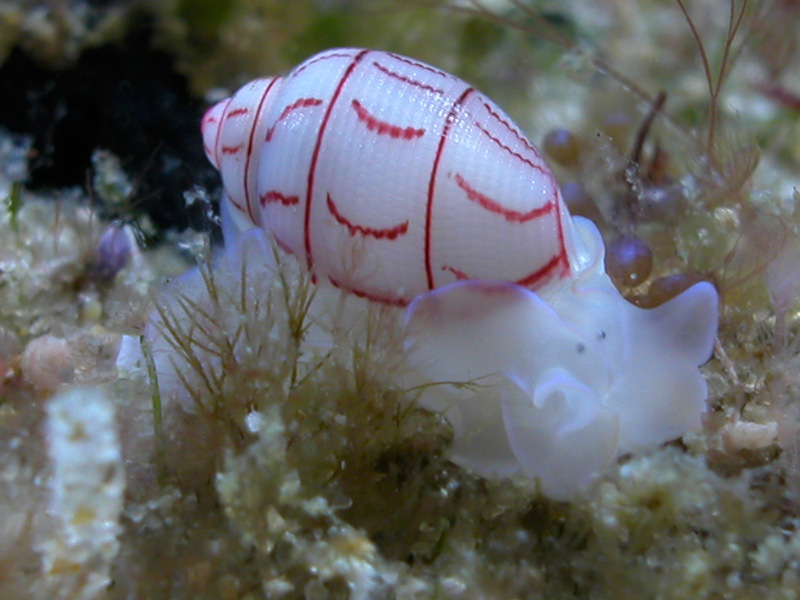 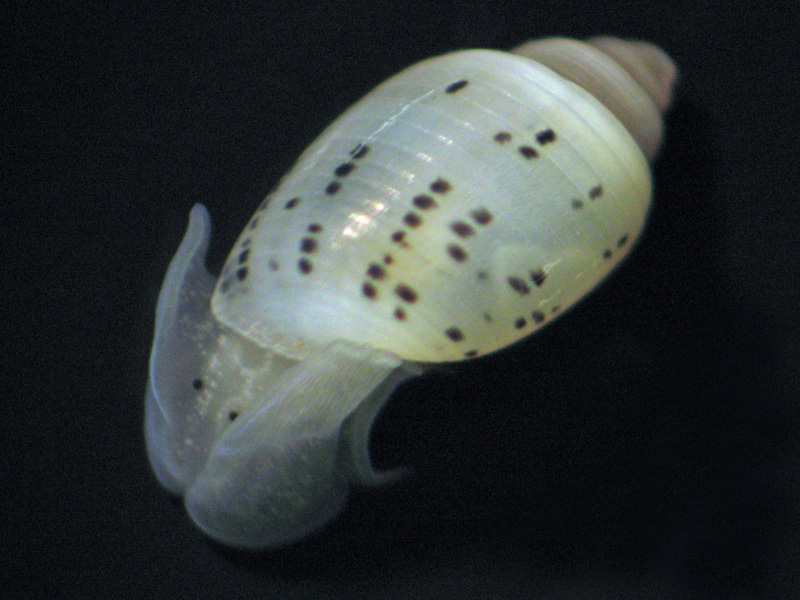 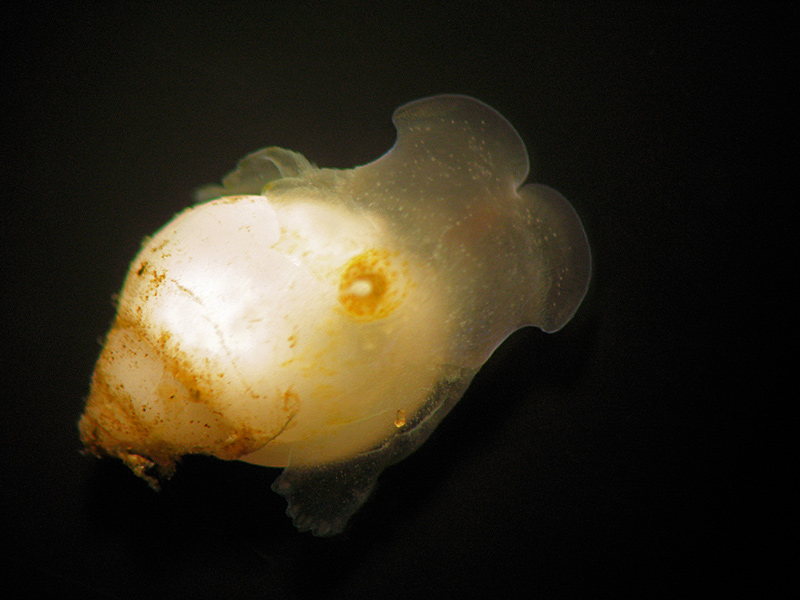 Ringicula sp. Ringicula species can be found intertidally and also at great ocean depths. Diet is not well-known but some are known to feed on polychaete worms. 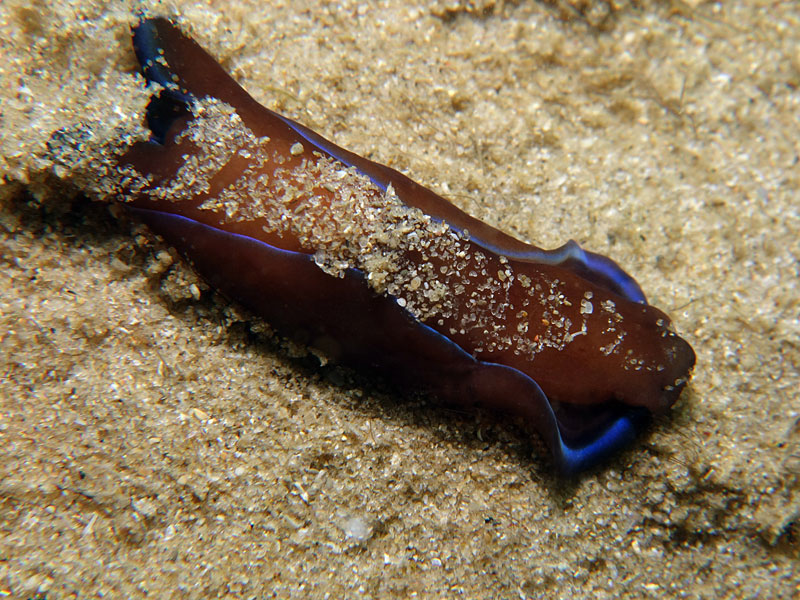 Species of Philinopsis have a diversity of diet and we have discussed some of them previously under other prey, but Philinopsis gardineri is known to use its long muscular and tubular buccal pump to extract polychaete worms from their burrow. 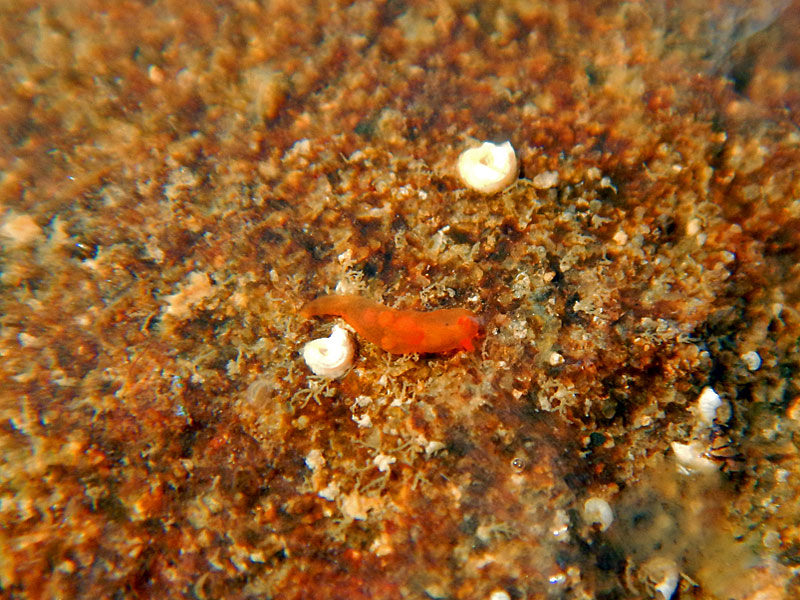 Photographed on the underside of an intertidal rock the minute dorid Vayssierea felis is seen moving between the calcareous tubes of its polychaete prey the Spirorbis worms. (Image by kind courtesy of Julie Schubert.) 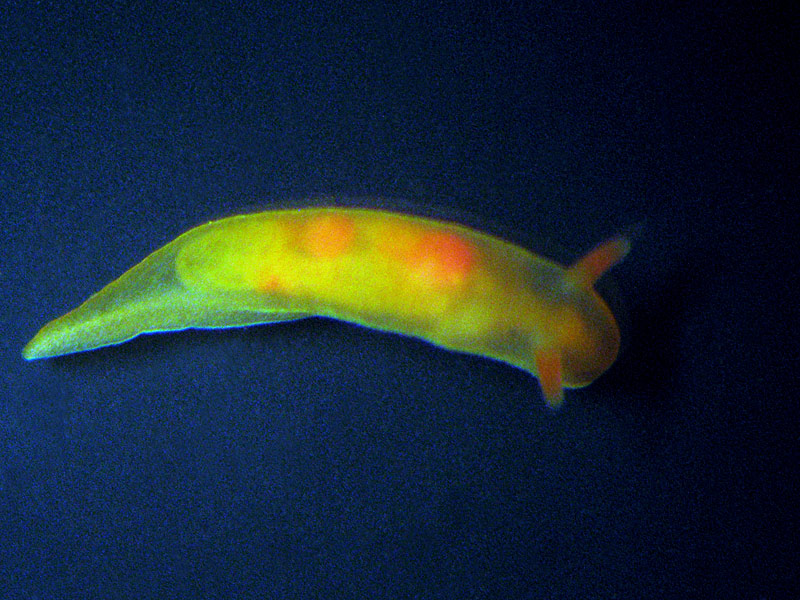 A microscope image on black of a minute Vayssierea felis. Note the lack of gills in this species.

The Polyclads are flatworms with many of the well-know species being large and colourful. However there are many others small and drably coloured that are prey for some sea slugs. The small acoel flatworms, such as Waminoa sp., form the diet of many of the Aglajidae family for example the Chelidonura, Mariaglaja and the small Niparaya species. 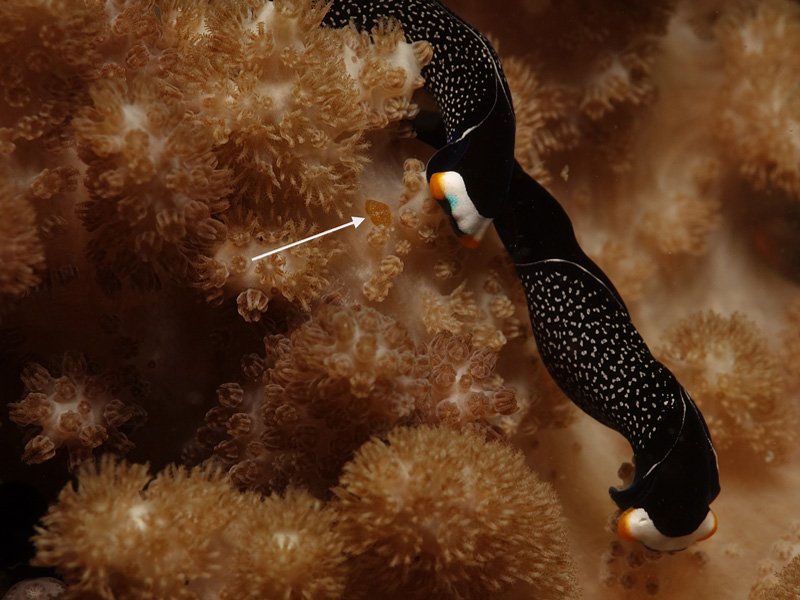 A series of images showing hunting and consumption of an acoel flatworm, a polyclad worm (arrowed), by a hunting cephalaspidean, Mariaglaja inornata. Here it detects the flatworm. 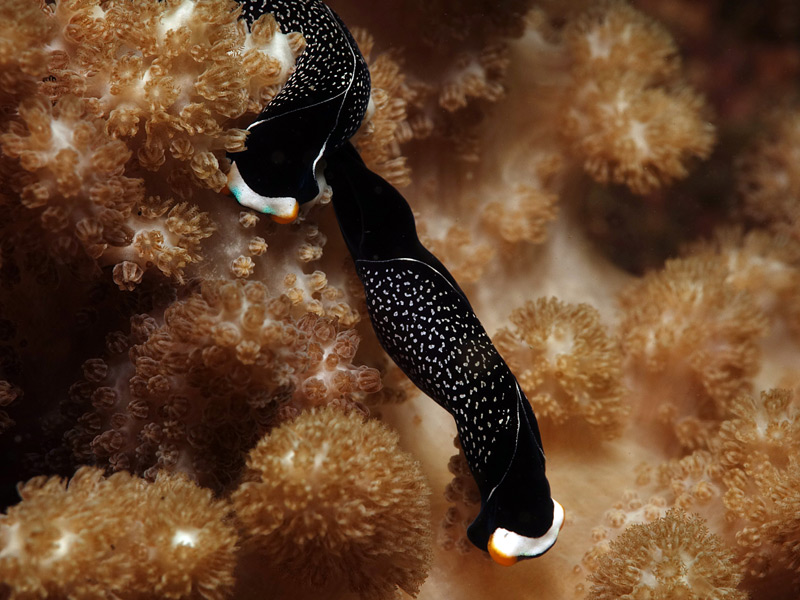 The sea slug then moves in and consumes the flatworm whole. There were six Mariaglaja inornata hunting as a pack and thoroughly searching the octocoral for prey. 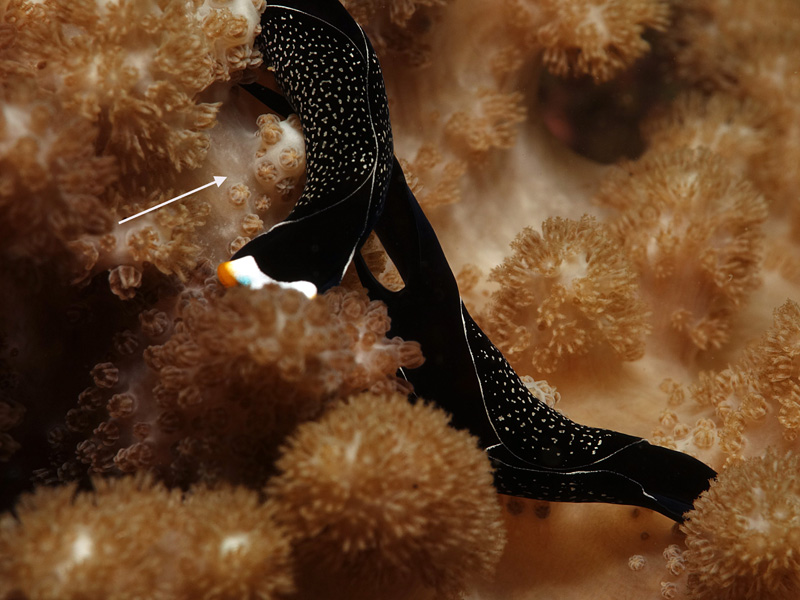 The bare patch formerly occupied by the flatworm (arrowed), consumed by the sea slug. At times there can be hundreds of these small flatworms colonising the stems and branches of a soft coral. 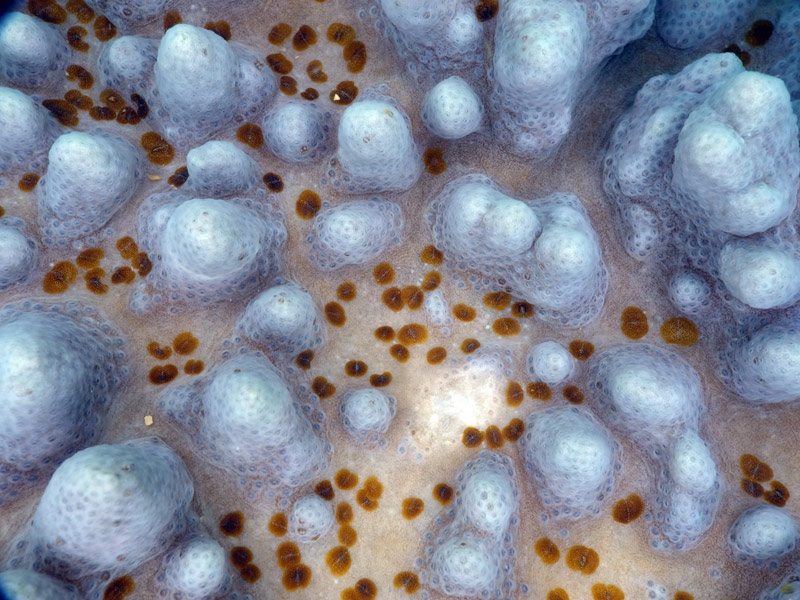 Bivalves are molluscs with two hinged valves forming the shell that can close together for protection. Most live with the majority of their body concealed in the soft substrate as they filter the water for food. The sea slugs that prey upon bivalves are certainly specialist feeders able to plough through the substrate in search of them and possess gizzard plates to crush and grind the shells once ingested, in order to obtain the flesh within. Philine species of the Philinidae family are highly adapted for this purpose with a wedge-shaped and muscular body. 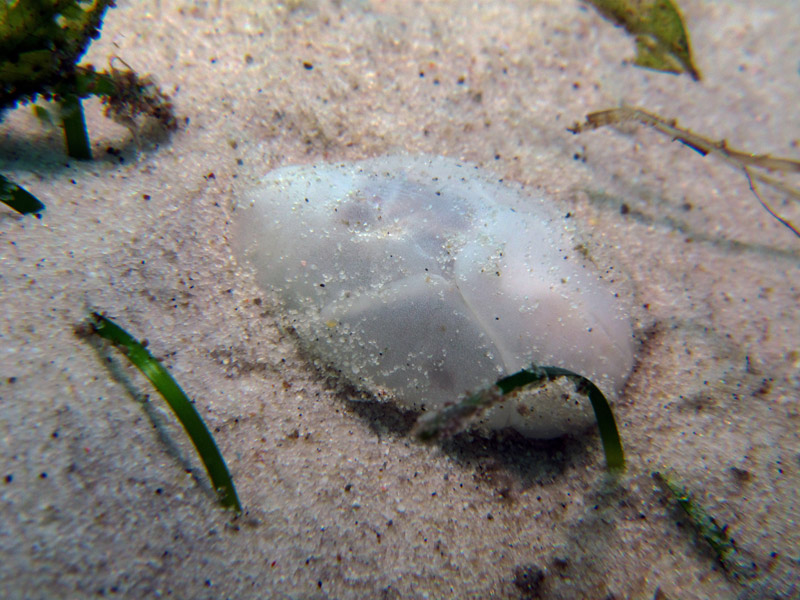 The rarely sighted Philine angasi that lives its life infaunally, hunting bivalves that it ingests and then crushes the shells with strong gizzard plates. Note the muscular wedge-shaped form for a burrowing lifestyle.

Crustaceans are marine animals with a hard exoskeleton for support and protection. We are all familiar with the large examples of crabs, lobsters and shrimps but there are also many much smaller examples of these not often observed and also other small forms such as isopods and copepods. These small crustacea form the diet of the nudibranchs of the Melibe genus, dendronotinids possessing a much modified and expanded oral veil that they either hold up into a current to catch passing prey or throw over the substrate thus trapping prey beneath. They have lost the radula and jaws are lost in some but most possess chitinous stomach plates to assist mechanical digestion. Barnacles are crustaceans too and the Gooseneck barnacles attach themselves to flotsam on the ocean surface. There they are joined and preyed upon by the aeolid nudibranch Fiona pinnata. Small crustaceans are hunted by the aglajids of the Odontoglaja genus. These are unusual aglajids in possessing a form of radula that is totally absent in the other members of the family. A couple of the Pleurobranchoidea order (side-gilled slugs) including Euselenops and Pleurobranchaea are generalist feeders known to include small crustaceans in their diet. They possess a wide oral veil fringed with sensory papillae for efficiently searching across the substrate for any sign of prey. 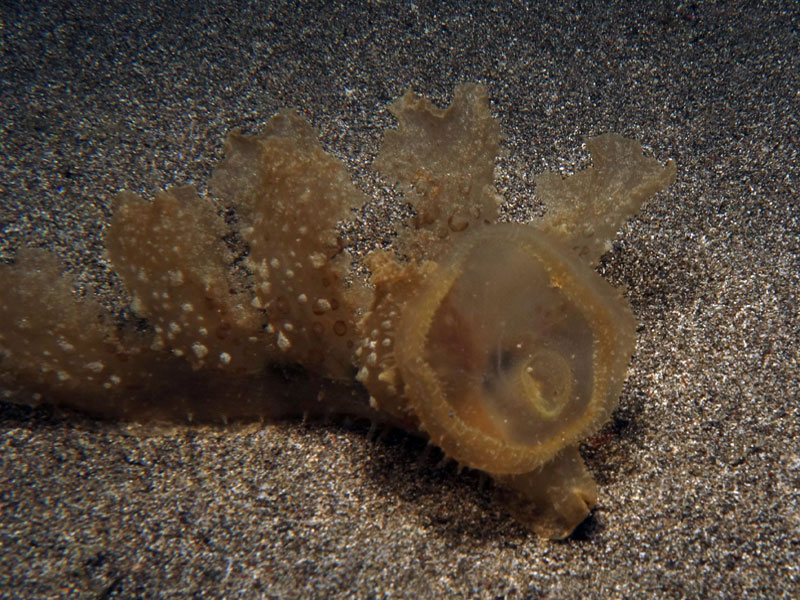 The dendronotinid nudibranch Melibe viridis hunting small crustaceans across the substrate expanding and rearing up the large oral veil ready to cast it forwards. 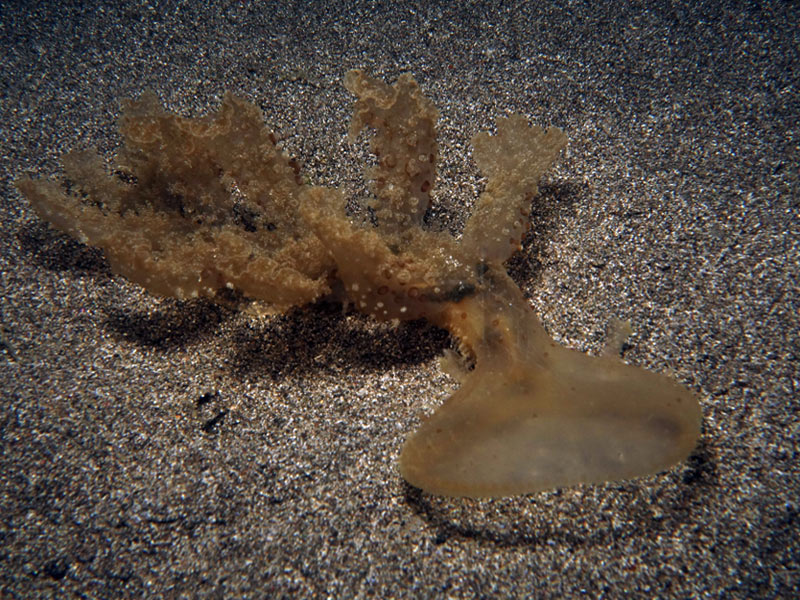 Here the oral veil is about to land on the substrate and capture the nudibranch’s prey beneath.

Below is a video of Melibe viridis feeding by casting its large oral veil over the substrate to trap crustaceans. The oral veil is then contracted towards the mouth to ingest the trapped prey. Towards the end of the clip it is aggravated by trapping something else unintentionally in its oral veil and thrashes about trying to dislodge it. 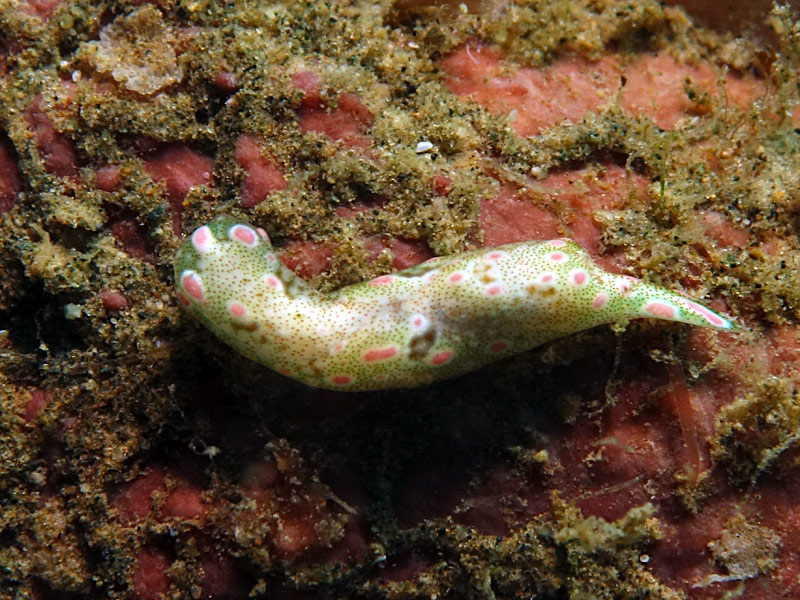 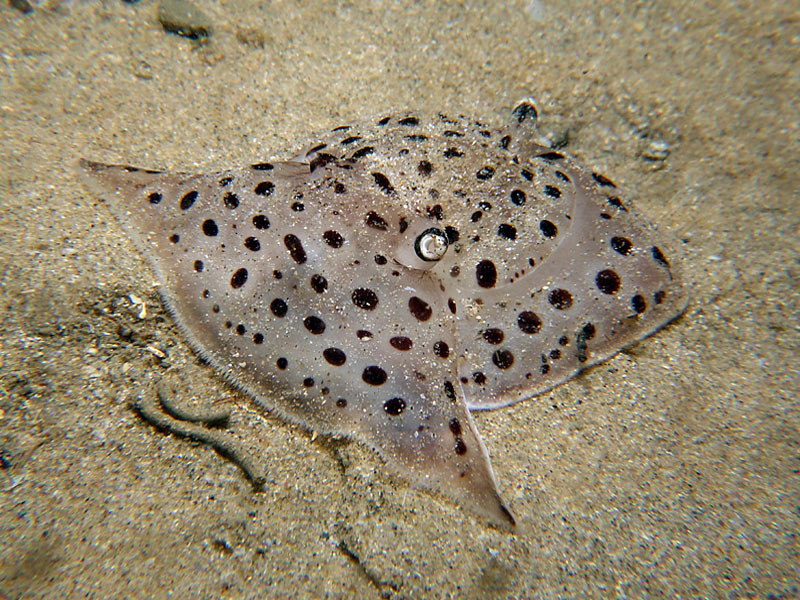 The generalist feeder Euselenops luniceps known to include crustaceans in its diet. Note the wide oral veil with many sensory papillae.

This and the other NudiNotes on feeding have been but an overview of sea slug diets. There is still much to learn about the specific diets of the various sea slugs, however one thing is known for sure – the diets are as diverse as the sea slugs themselves but any particular sea slug species often only has a narrow range of prey – Specificity in Diversity.

References:
– Rudman, W. B. (1970). A revision of the genus Philine in New Zealand with descriptions of two new species (Gastropoda, Opisthobranchia). Journal of the Malacological Society of Australia, 2(1): 23-34.

– Rudman, W. B. (1972). The anatomy of the opisthobranch genus Hydatina and the functioning of the mantle cavity and alimentary canal. Zoological Journal of the Linnean Society, 51: 121-139.

– This NudiNote has been modified from a previously published article in Dive Log Australasia Magazine – NudiNotes Column, Issue: #390 (October 2021): pp. 14-15 by David A. Mullins.