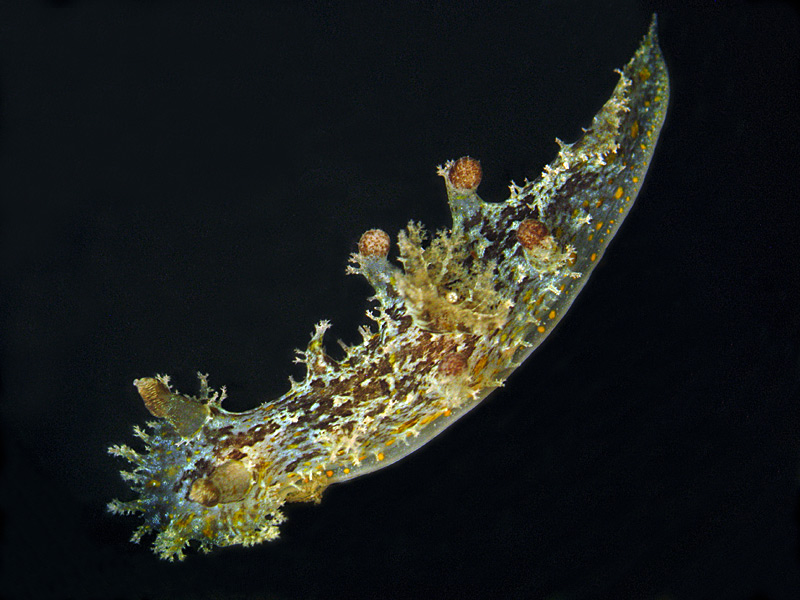 Species of the humble sea slug can possess unusual and extraordinary capabilities such as autotomy, zooxanthellae hosting, kleptoplasty, exploitation of their prey’s defences through nematocyst sequestration and toxin accumulation, not to mention some incredible host mimicking. Another, not widely known capability, is that of bioluminescence. 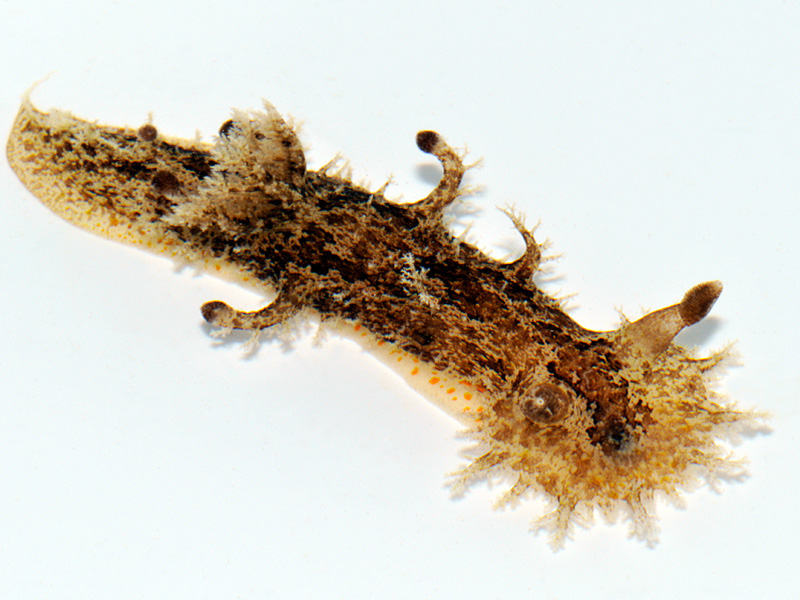 Plocamopherus ceylonicus with the anterior pair of bioluminescence globes easily discernable at the apices of their long stalk-like supporting papillae. In this specimen from a silty intertidal habitat, the globes are dark brown.

BIOLUMINESCENCE
Bioluminescence is defined as: The emission of visible light, produced through chemical reaction, by animals or (rarely) their symbionts. Not to get too technical, bioluminescence is typically created due to the oxidation (reaction with oxygen) of luciferin molecules made possible by an enzyme catalyst called luciferase. Luciferin and luciferase are generic names used to encompass a range of related molecules able to perform this same function. Bioluminescence is believed to have evolved independently many times (estimated at more than 40) across many animal phyla. In the case of nudibranchs it is intrinsic, being produced via chemical reactions by the nudibranch itself rather than through the hosting of symbiont bioluminescent bacteria.

BIOLUMINESCENCE or FLUORESCENCE
Bioluminescence and Fluorescence should not be confused – they are two separate phenomena. Bioluminescence can be produced by the animal in complete darkness. Fluorescence, on the other hand, requires excitation by a light source, so is not visible in total darkness. “Fluorescence is a process where light of high-energy photons temporarily excites electrons of a molecule. When the molecule relaxes, the energy is re-emitted as a lower-energy photon with a longer wavelength. Typically, blue or violet light is used to excite green, yellow or red fluorescent emission.” (MBARI, 2019). Bioluminescence is therefore an active process whilst fluorescence is a passive consequence. However, just to add a little confusion, some animals use bioluminescence to excite fluorescence.

NUDIBRANCH BIOLUMINESCENCE
Not too many nudibranchs are known to display bioluminescence but some species of dorid – Plocamopherus and Kaloplocamus of the Triophinae subfamily (Polyceridae family) possess the capacity. The dorid nudibranch species known to emit bioluminescence include: Plocamopherus imperialis, Plocamopherus ceylonicus, Plocamopherus maderae, Plocamopherus tilesii and Kaloplocamus ramosus. This is not to say there are not others of the genera with the capability. Bioluminescence is only observed when elucidated through stimulation whilst in captivity. Observation and recording in the wild due to natural stimulation would be most difficult, if not impossible. It is possible though that all of the Plocamopherus species may possess the capability because a common and unique feature to that genus is the possession of one or more pair (up to three pair) of distinct globular knobs terminally situated on large papillae. In those species that are known to emit bioluminescence it emanates from those knobs so it is not too great a leap to assume that it may be produced by all species possessing them. Plocamopherus bioluminescence is derived from columnar cell secretions performing the luciferin-luciferase reaction making it extra-cellular bioluminescence. The body wall and smaller papillae can also emit flashes of light but this is of a much lower intensity than that emitted by those globular knobs situated terminally on the largest papillae. Species of Kaloplocamus lack the distinctive globes and instead emit the bioluminescence from cells in the lateral body wall, head region and also the tail crest. Kaloplocamus bioluminescence is known to be an intracellular process. 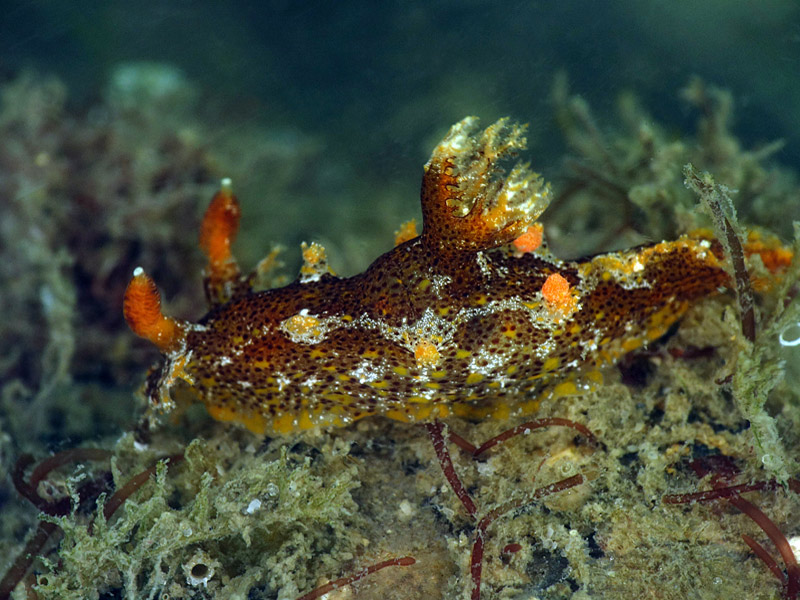 Plocamopherus imperialis. This species possesses three pair of large papillae but just a single pair of bioluminescent globes located on the papillae posterior to the gill. 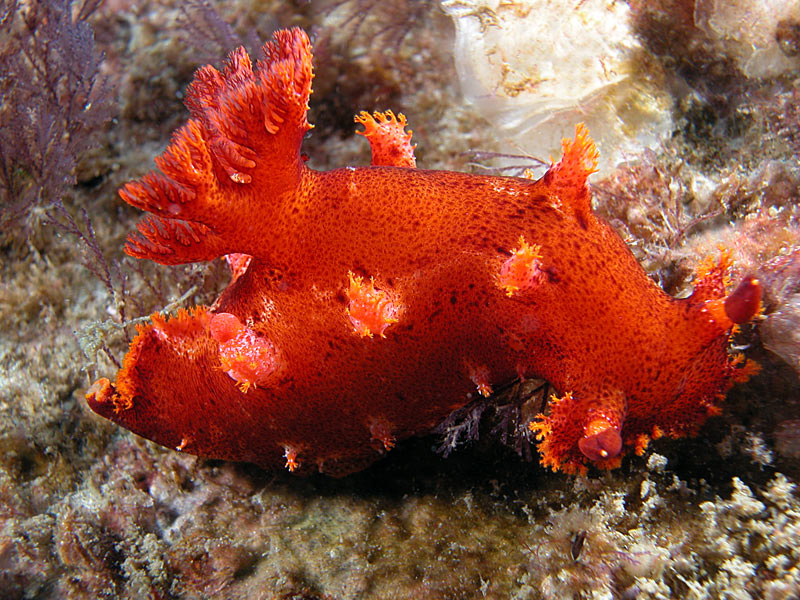 A bright red colour form of Plocamopherus imperialis. The papillae structure is different to those of Plocamopherus ceylonicus. Rather than long and stalk-like they are shorter and more robust with the bioluminescent globular knob located at one corner. 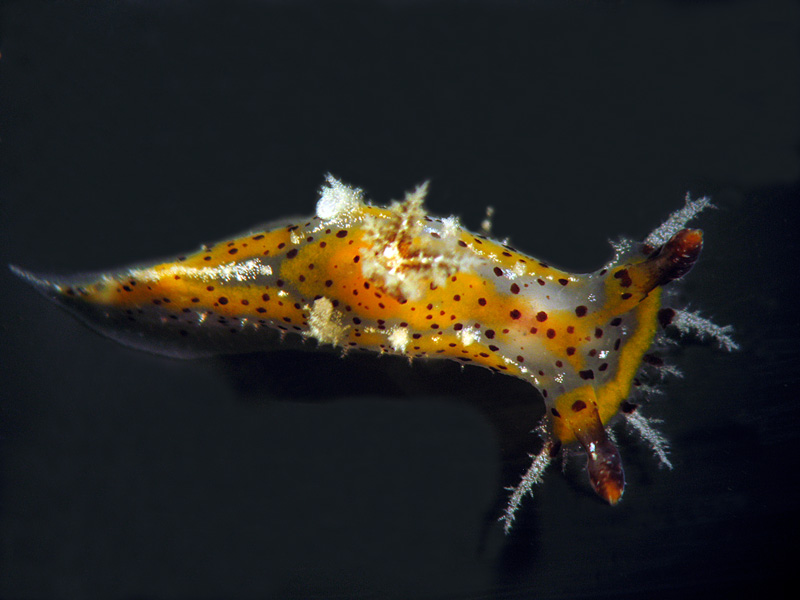 Another of the bioluminescence producing nudibranchs Plocamopherus tilesii. This species has three pair of large lateral papillae with only the middle and posterior pairs bearing light producing globes.

WHY BIOLUMINESCENCE?
A number of reasons have been put forward for the development of bioluminescence, both offensive and defensive explanations, including luring or illuminating of prey, warning colouration, startling (deimatic behaviour), sacrificial distraction, counter-illumination, as a “smoke screen” if particles are released, and even mate attraction. These nudibranchs however, emit the light not as a steady glow but in rapid flashes meant to produce a startle response and therefore a distraction or hesitancy in potential predators, that have triggered it by physical disturbance when encountering the nudibranch. In Plocamopherus the aforementioned structures that produce the most intense bioluminescence emissions are normally situated around the delicate and vulnerable gill that, in these phanerobranch nudibranchs, cannot be withdrawn into a protective pocket below the mantle surface. There is no doubt that in this situation it is employed in a defensive role and not as a prey lure or mating signal. This phenomenon might, in the case of these slow moving nudibranchs, also be diverting the predator away from that highly valuable and vulnerable gill to another, perhaps even sacrificial, portion of the body. Specimens are often seen with one or more of these globular knobs missing or in a stage of regeneration. The process of creating bioluminescence requires significant energy expenditure as does the process of regenerating sacrificial parts, so it can be reasonably assumed that it is providing an acceptable return by way of protection. 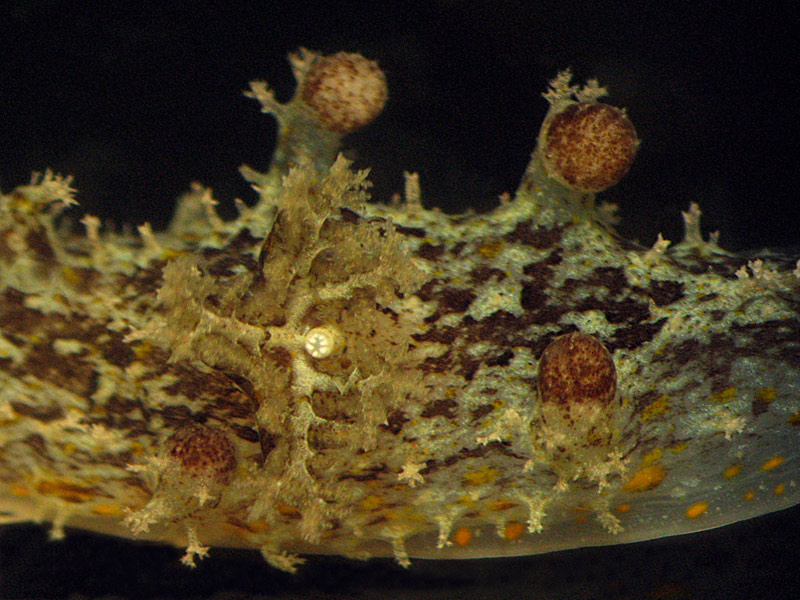 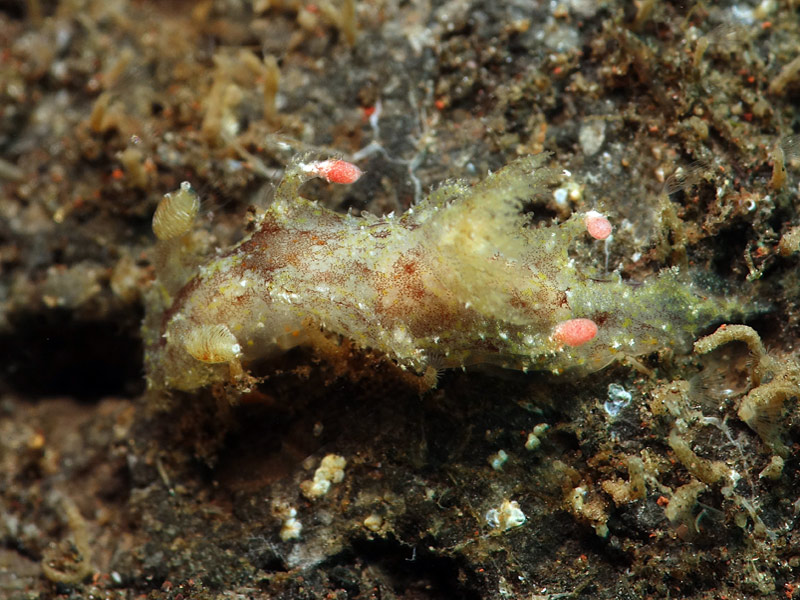 This reef-dwelling specimen of Plocamopherus ceylonicus has lost the left anterior bioluminescent globe. Perhaps it has done its job of being sacrificed to save the gill. Note the pink colour of the globes of clean water specimens. 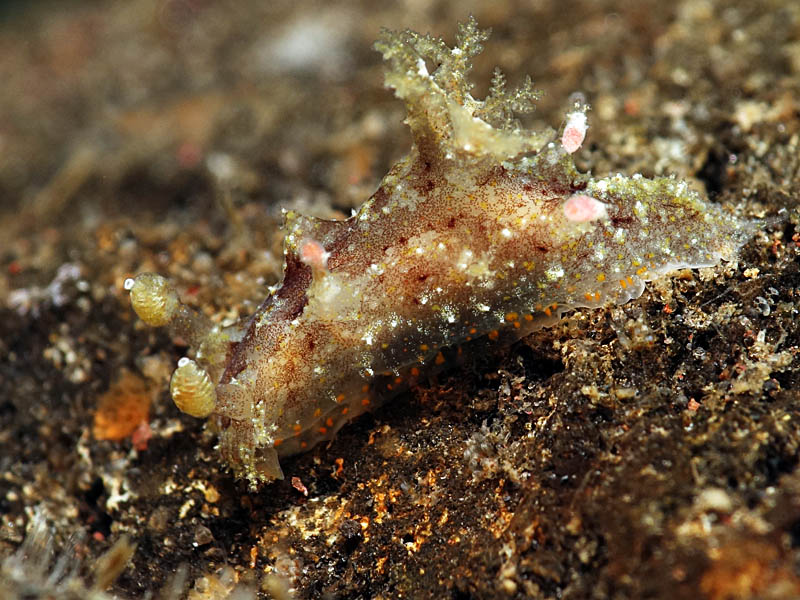 Another reef specimen of Plocamopherus ceylonicus showing damage to the light-emitting globes. This example has lost the right anterior globe to a possible predator attack. The gill appears undamaged.

Some pelagic (planktonic) species of the dendronotinid nudibranchs – the highly derived members of the Phylliroidae family – such as Phylliroe bucephala, also possess a bioluminescence capability. The adult is an excellent free swimmer. Phylliroe bucephala is highly bioluminescent possessing light emitting glandular cells scattered all over the surface of the body, but more abundant on the upper and lower margins. It appears to have the ability to bioluminesce at will – glow or flash – rather than just flashing as a reaction to being disturbed. 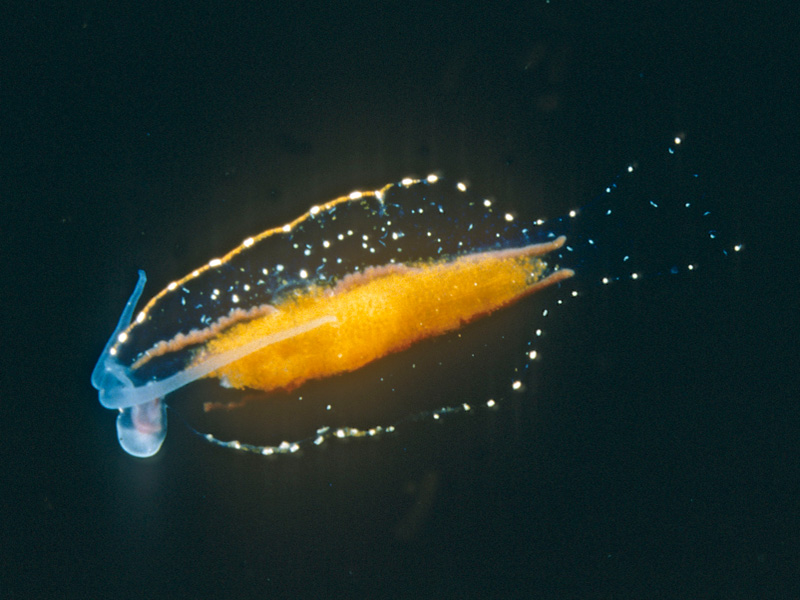 Phylliroe bucephala on the hunt for its jellyfish prey to which it attaches itself until completely consumed. Usually only photographed on blackwater dives. It belongs to the Phylliroidae family of nudibranchs – highly modified for a planktonic existence, swimming in the water column rather than crawling over the substrate. (Image by kind courtesy of Rudie Kuiter.)

Acknowledgement: Use of the image of Phylliroe bucephala is by kind generous courtesy of Rudie Kuiter (Nudibranchs of the World).

– This NudiNote has been modified from a previously published article in Dive Log Magazine’s – NudiNotes Column, Issue: #391 (December 2021): 14-15 by David A. Mullins.