Lookalikes to look out for – No. 1 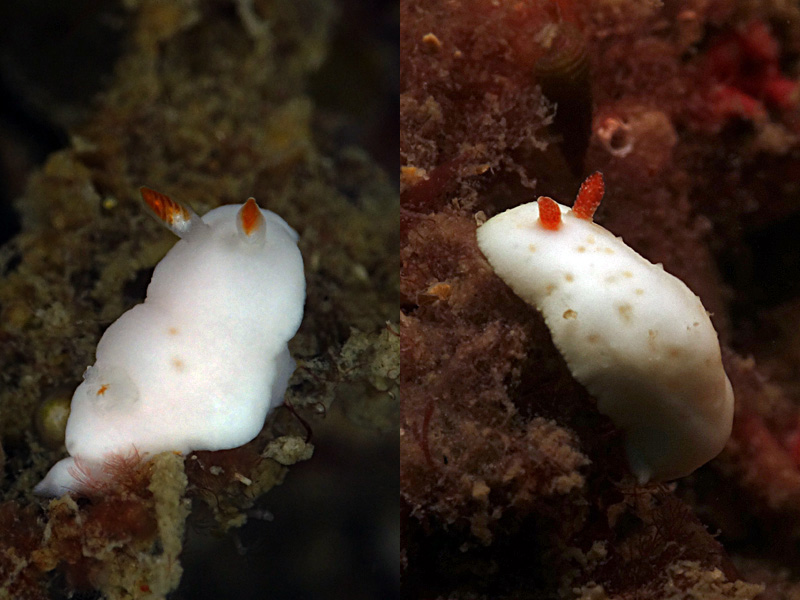 Sometimes when reviewing images post-dive it’s easy to overlook an uncommon species if it has a similar appearance to a species that is frequently sighted. We know the common one well but have forgotten about the rarer one that looks similar – The Lookalike.

This NudiNote will discuss a not-so-common species – Verconia decussata (Risbec,1928) (formerly Noumea decussata) that is often misidentified and confused with a much more commonly sighted species having a similar appearance – Verconia simplex (Pease,1871) (formerly Noumea simplex). This confusion even extends to the literature as well. 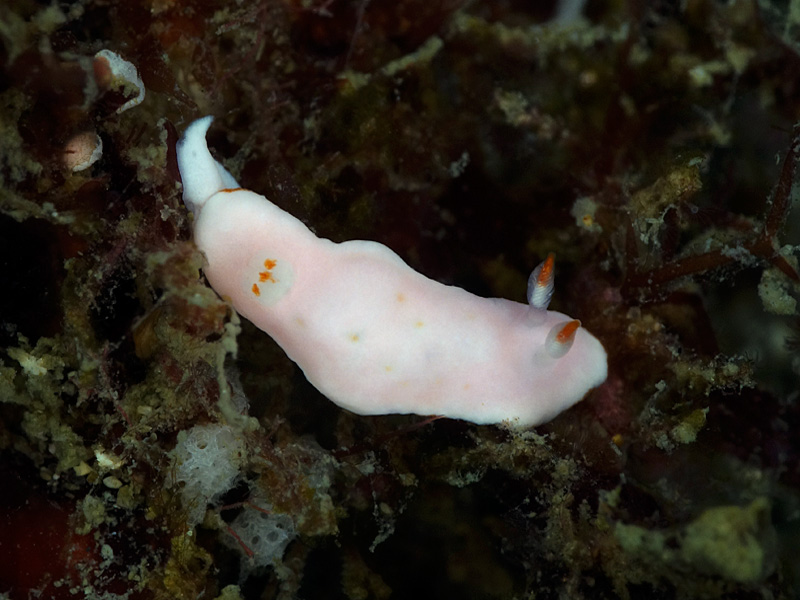 Verconia simplex – This specimen is the classic presentation: Pink mantle colour, red/orange tipped rhinophores and gills and some red/orange colour to the mantle edge. 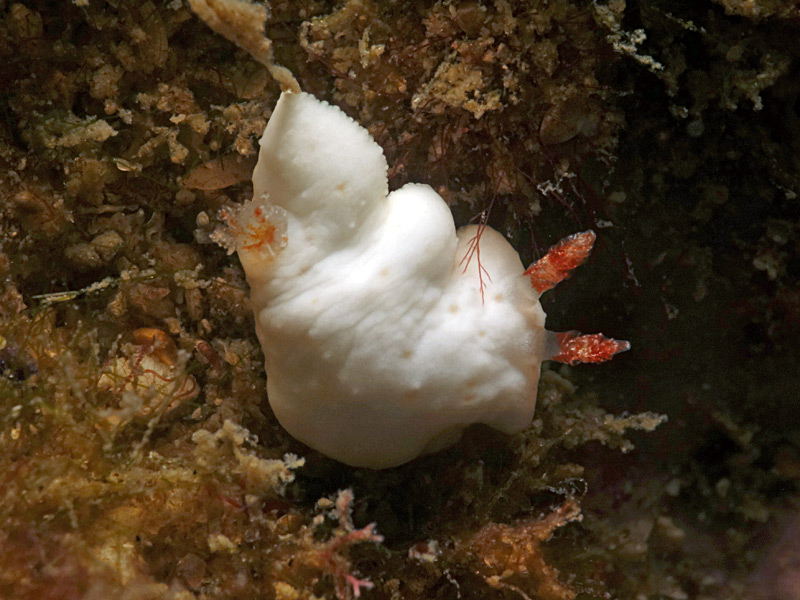 Verconia decussata – This specimen exhibits all the characteristics of the species: White mantle, irregular yellow/brown smudges on the mantle, whole rhinophore clavus red, red lines up the inner axes of otherwise translucent gills and no orange colouration to mantle edge.

Both are small and white with red/orange to the rhinophores and gills and sometimes small brownish/orange smudges scattered on the dorsum. So how do we tell the difference? The best characteristic to use is the rhinophores as both species are otherwise variable in presentation. In V. decussata the rhinophores are completely red rather than just the orange/red tip or top half exhibited by V. simplex. 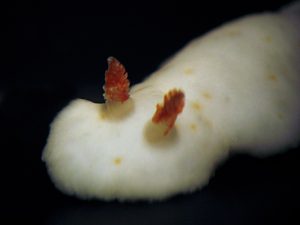 Verconia decussata – An anterior view showing the rhinophores and the characteristic totally red clavus of this species. 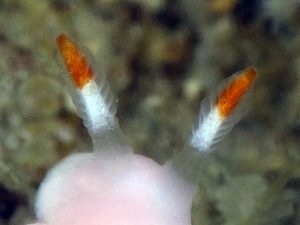 Verconia simplex – A close up of the rhinophores showing that the red colouration is limited to the tips.

Additionally V. simplex may have a pinkish hue to the mantle and sometimes also an orange line around the mantle margin, most often broken or fragmentary, neither feature being present in V. decussata however also be aware that both of these features may not be present or obvious in V. simplex requiring a fall back on the rhinophore presentation. 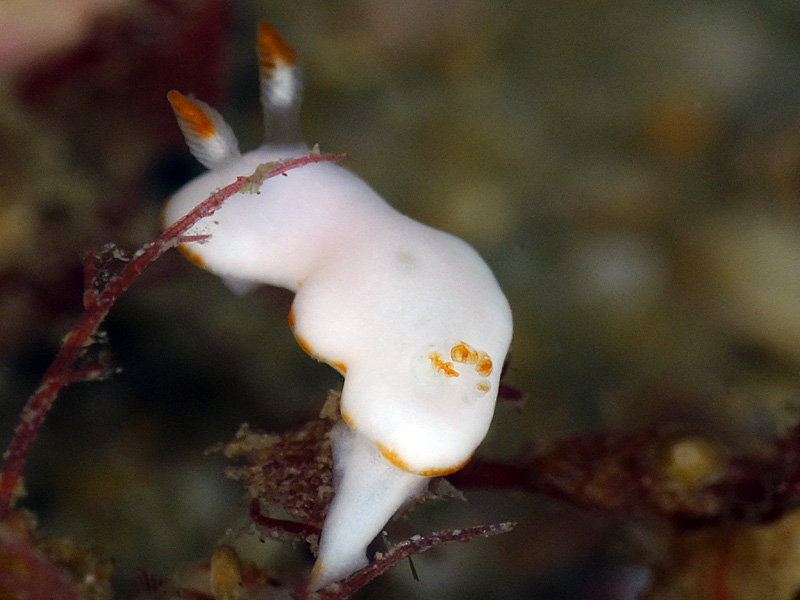 Verconia simplex – This is a good example of the pink mantle colouration and the orange edge to the mantle. Note that this specimen also has some orange on the tip of the tail.

The gill colouration is different between them too but this is not a reliable feature to depend upon as both of these sensitive species often have the gills withdrawn from view. If they happen to be observable then with V. decussata there is a red line up the internal axis of each translucent gill whereas V. simplex just presents with orange tips to the gills. 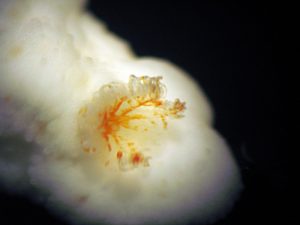 Verconia decussata – This dorsal aspect of the displayed gills shows the red/orange line up the internal axis of each. 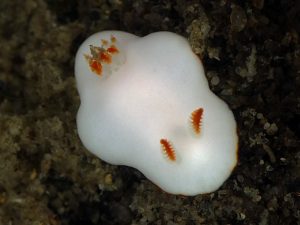 Verconia simplex – In this image the gills are extended and it can be seen that just the tips are red/orange.

One characteristic that is often quoted for differentiation states that V. decussata can be identified due to its cruciform appearance created by the undulations of the mantle margin. Unfortunately this is an unreliable characteristic because V. decussata does not always present in that manner and V. simplex has been known to take on that shape itself at times. 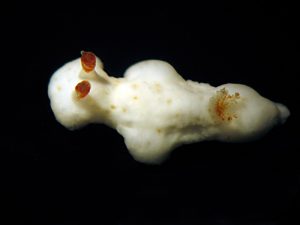 Verconia decussata – This specimen has formed the so called “characteristic” cruciform shape to its mantle. Compare to the Verconia simplex image to the left. It is not a reliable feature for identification. 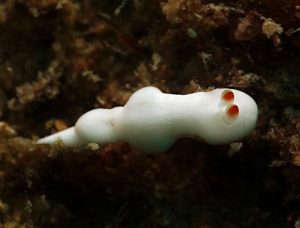 Verconia simplex – This specimen has formed its mantle into a cruciform shape. Note also the completely retracted gills.

In a perfect world then, V. simplex will have a pink mantle, some orange to the mantle margin, red/orange just to the upper half of the rhinophore clubs and red/orange to the gill tips. Nature however does not always follow the script.

Take a little time to examine your finds a little closer.