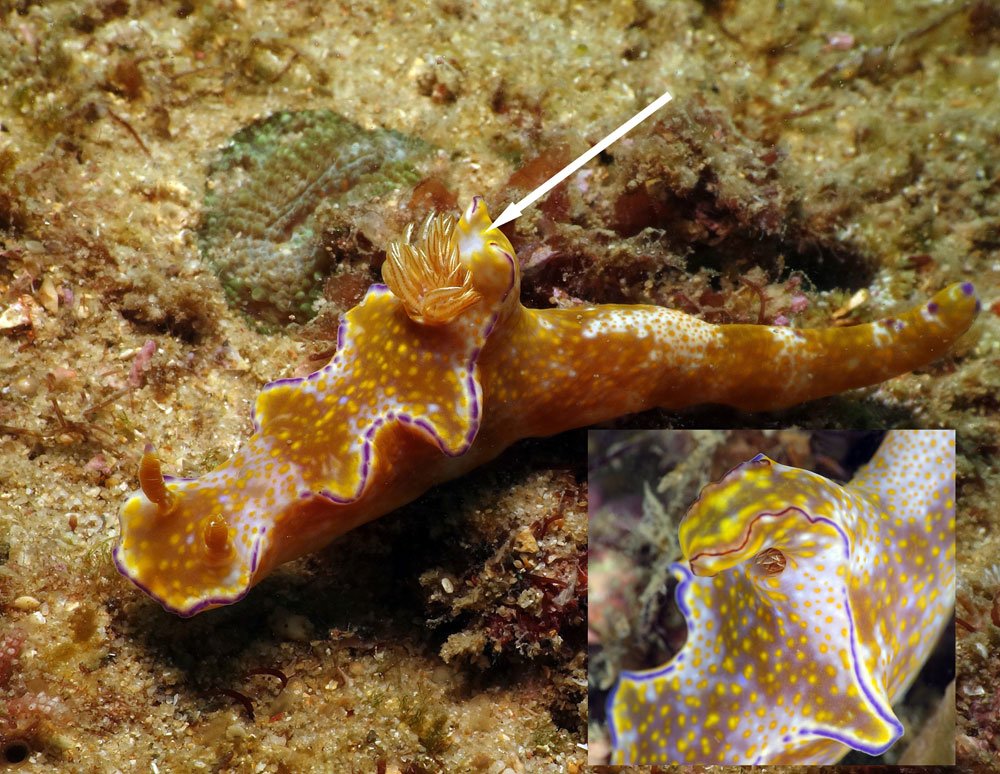 The sea is full of hungry mouths, many many hungry mouths either lying patiently in ambush or constantly on the move, in all directions, hunting for any opportunity to take a bite and feed. The last thing any animal needs is to have some attractive piece of their anatomy waving about in the water column looking like an easy meal. But many of the sea slugs, the nudibranchs in particular, do just that. The word nudibranch means naked gill of course, and early workers realized this exposed, naked gill was an important difference to warrant their own grouping within the gastropods hence the order Nudibranchia. So how do they prevent wholesale predation on those attractive and exposed “feathery” appendages that are so necessary for their survival?

Loss of shell – Exposure of gill
The sea slugs in detorsioning over evolutionary time and losing the shell of their sea snail forebears (secondary loss), or at least reducing its enveloping coverage, caused the gill, in those that retained it, to become exposed and seemingly vulnerable. There is a progression of change apparent in the different lineages related to shell reduction or loss, mantle cavity reduction or loss (where the gill had been located) and the resulting necessary development of alternative means to protect this vulnerable organ. There are quite a number of adaptations for this purpose many not immediately appreciated.

Alternative protection
These alternative methods utilised by the true nudibranchs include:
– The ability of the gill to retract by withdrawing fully into a protective pocket.
– Protection of the gill behind a physical barrier.
– Concealment of the gill among nearby appendages.
– The positioning of sacrificial decoy appendages.
– Repugnant chemical glands situated near the gill.
– Embedding of spicules in the integument and nearby appendages.
– Replacing the single almost centrally located (and easily targeted) gill with a series of secondary “gill” structures dispersed down the length of the body.
Often, more than one of these methods are used in combination to achieve a higher level of protection.

Among the dorid nudibranchs:
The cryptobranchs (hidden gills) have a pocket into which the gill can retract, below the surface of the mantle, for protection. In many, the region adjacent to the gill pocket carries defensive glands or spicules. A very few of the cryptobranchs have also developed protective appendages around the gill pocket (Ceratosoma and Miamira). Some of these appendages also carry defensive glands. 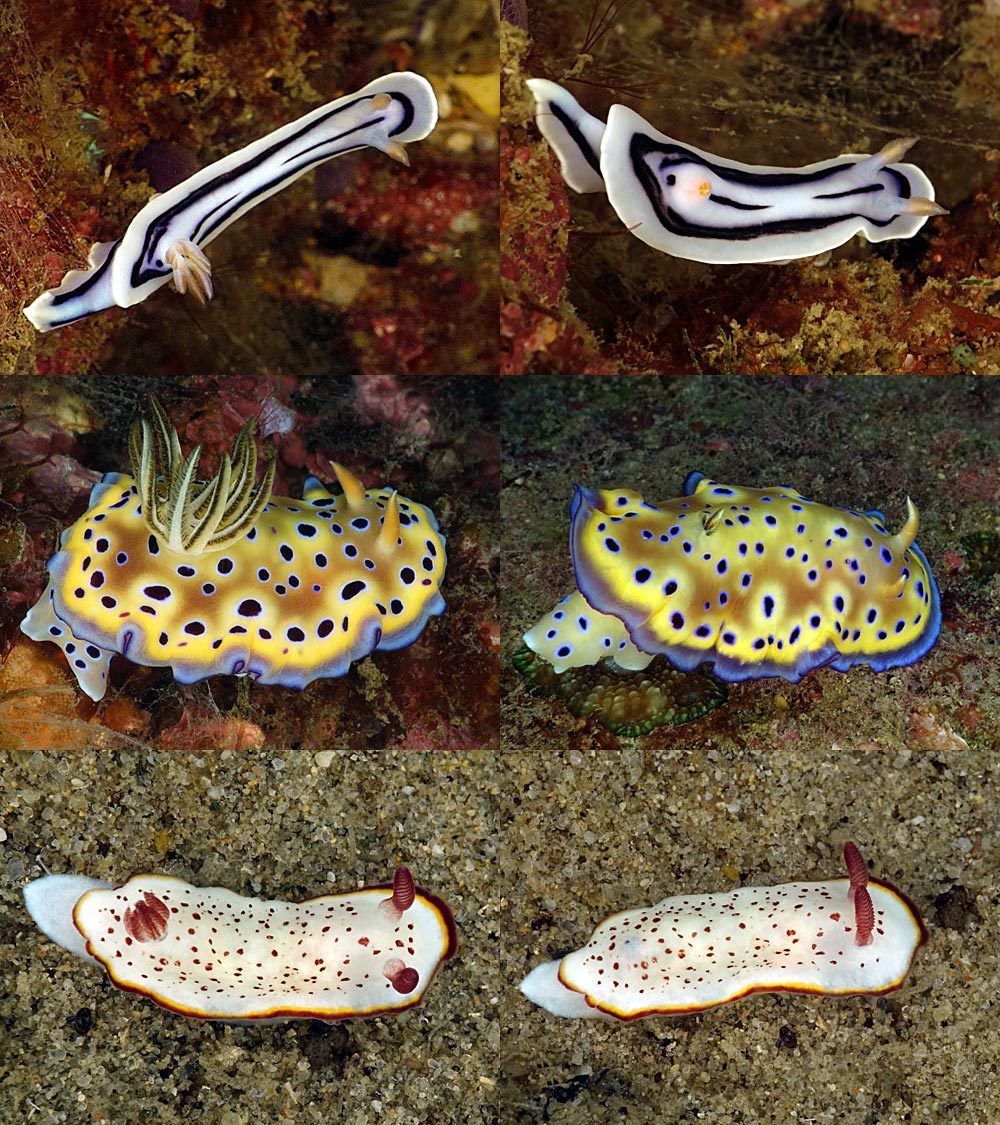 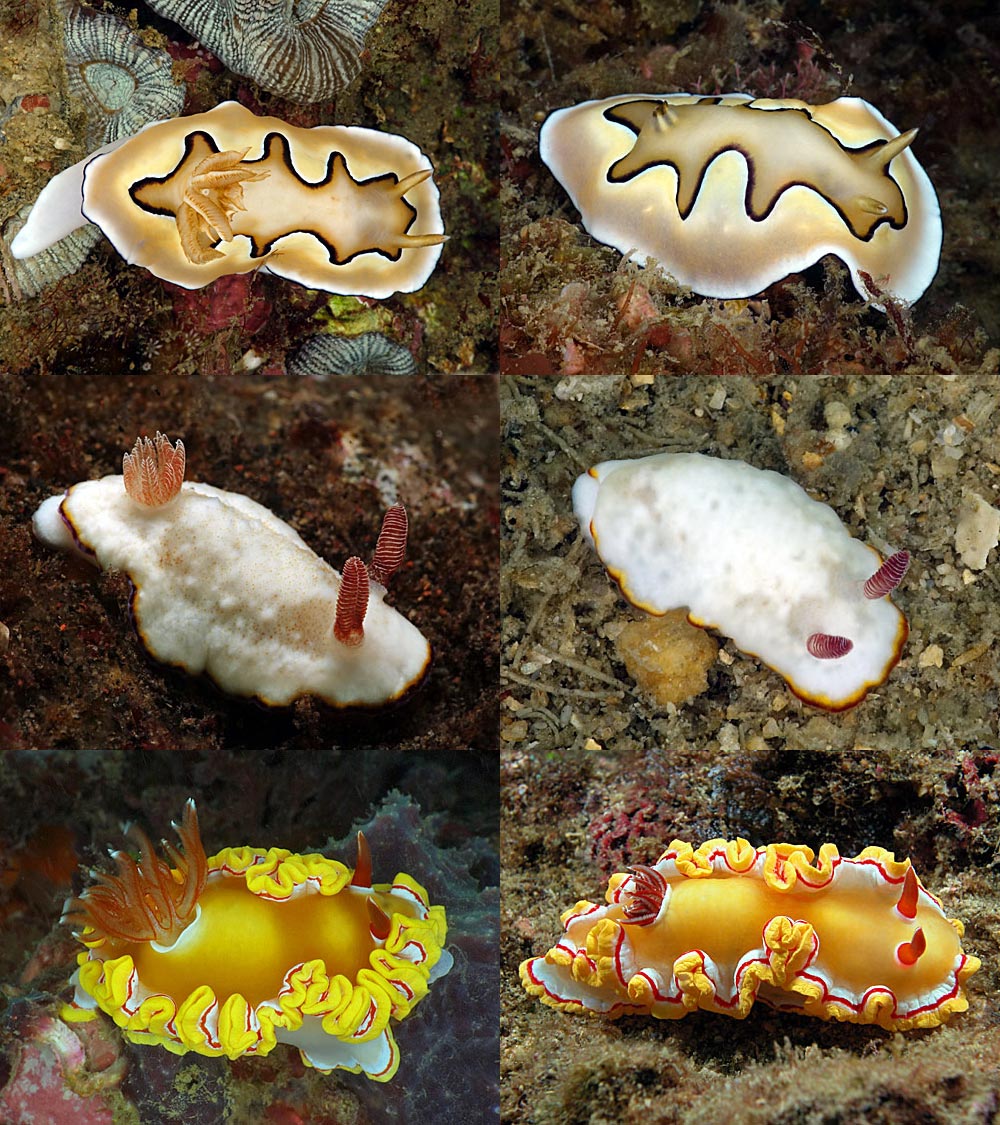 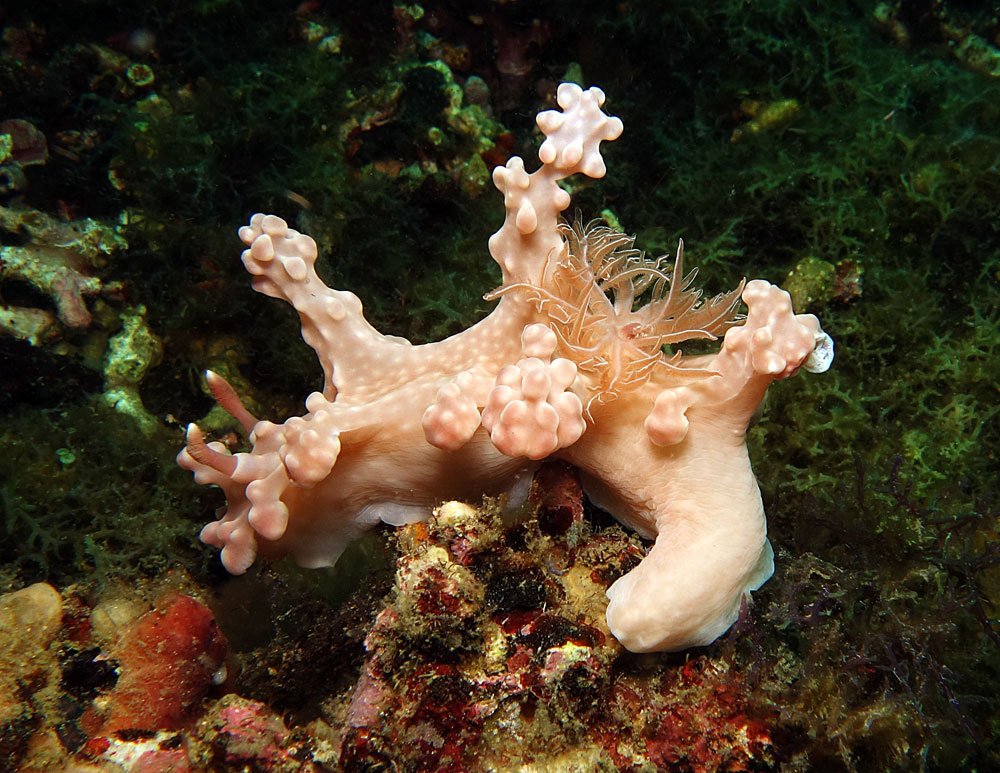 The cryptobranch dorid Miamira alleni with its gill fully expanded. A good example of multiple defensive attributes for gill protection. As well as being able to fully retract into a pocket, protection is also provided by the dorsal and lateral lobes surrounding it. But that’s not all – a surprise awaits any attacker, as the lateral and posterior lobes carry noxious/distasteful defensive glands on their ventral surfaces. This specimen shows some prior damage from an attack at the tip of the posterior lobe but we can be sure the unsuspecting predator will not return for a second bite.

Ceratosoma tenue, a cryptobranch, utilises several methods for gill protection – physical shielding, withdrawal of gill and chemical glands. In the main image a piece of the protective shield or “horn” has been bitten off (arrowed). It is unlikely the attacker will return as the “horn” contains glands with repulsive chemicals. The inset, at lower right, shows an intact protective “horn” and the gills beneath almost withdrawn into the protective pocket. 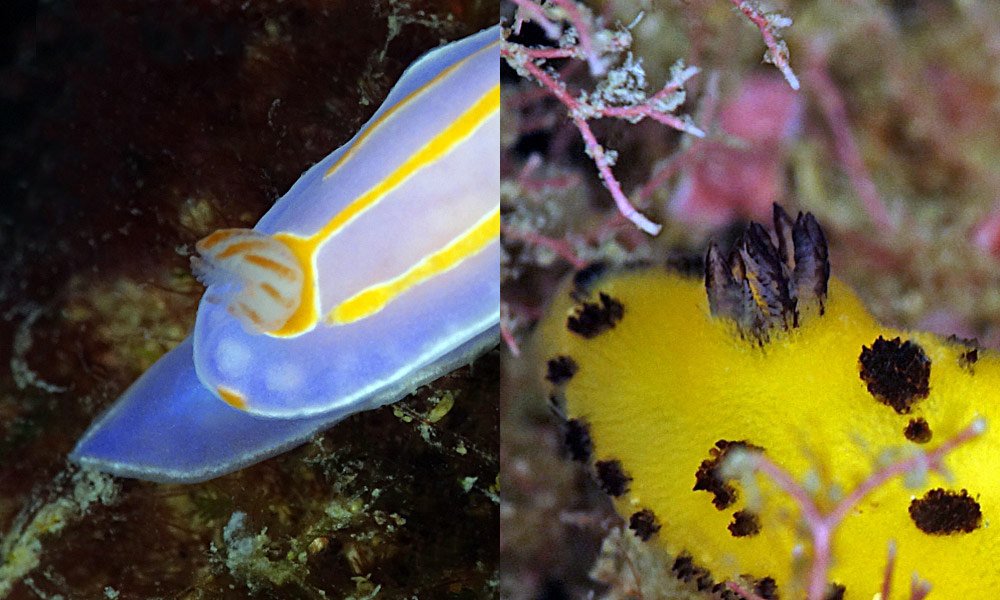 Defensive glands and spicules in the integument are two methods that cryptobranchs also employ in conjunction with withdrawing the gill.
– Left: Mexichromis trilineata has large defensive glands positioned just posterior to the gill pocket, visible here as white patches.
– Right: Jorunna sp. possesses caryophyllidia on the dorsum of the mantle that even extend up the rim of the gill pocket.

The phanerobranchs (visible gills) do not possess a pocket for full retraction, however the gills can contract somewhat and many have developed extra-branchial processes around the gill. These can take many forms, from simple, short or long appendages either side to a complete ring around the gill. There is no doubt that some are sacrificial in acting as a decoy to draw away the attacker’s attention from the gill itself. A good example of this is the light emitting globes situated on the larger processes surrounding the gill of the Plocampherous species. In others there is a shield or significant barrier lying across the front of the gills for protection. Some also have a quite sturdy gill-supporting base extending up each gill branch acting somewhat as a physical barrier for the delicate filaments located on the inner surface. 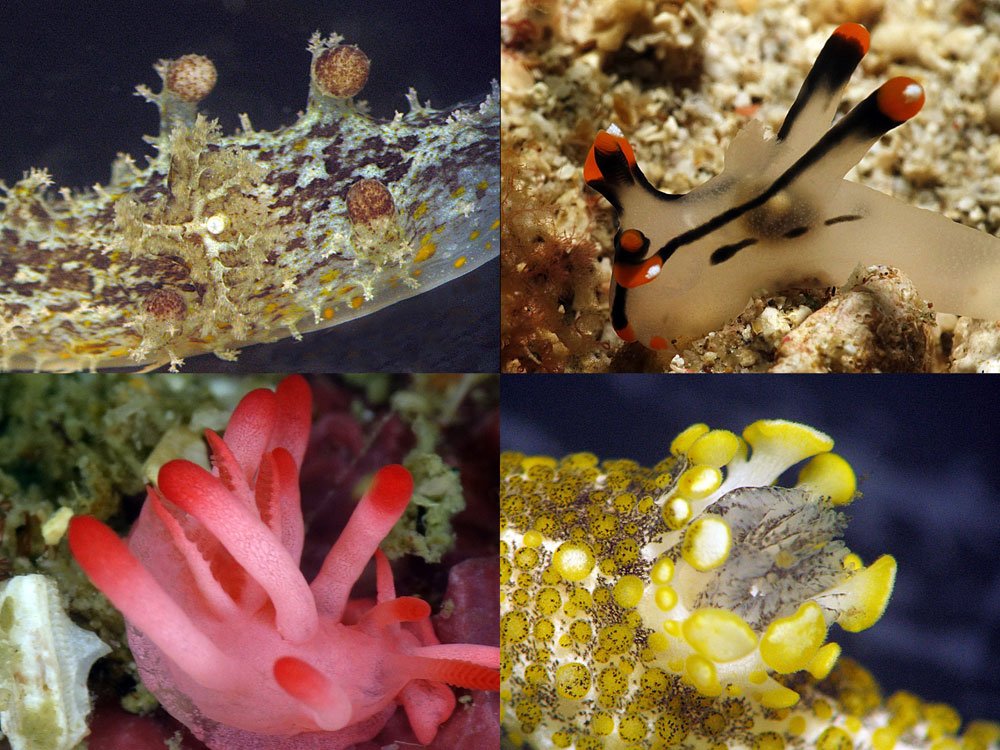 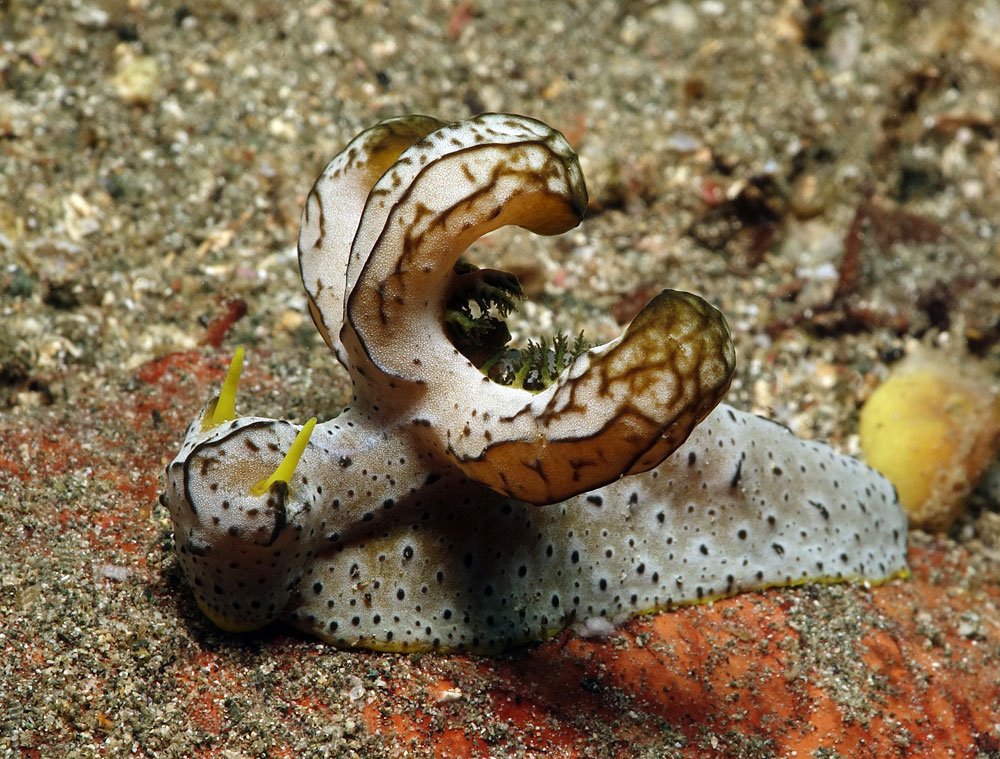 The extreme gill guarding structure of the phanerobranch, Aegires serenae. Acting as an anterior shield the three lobes are massively developed to arch over the delicate gills that are unable to retract for protection. This structure truly is – “over the top”. Most of the Aegires possess some form of gill barrier. 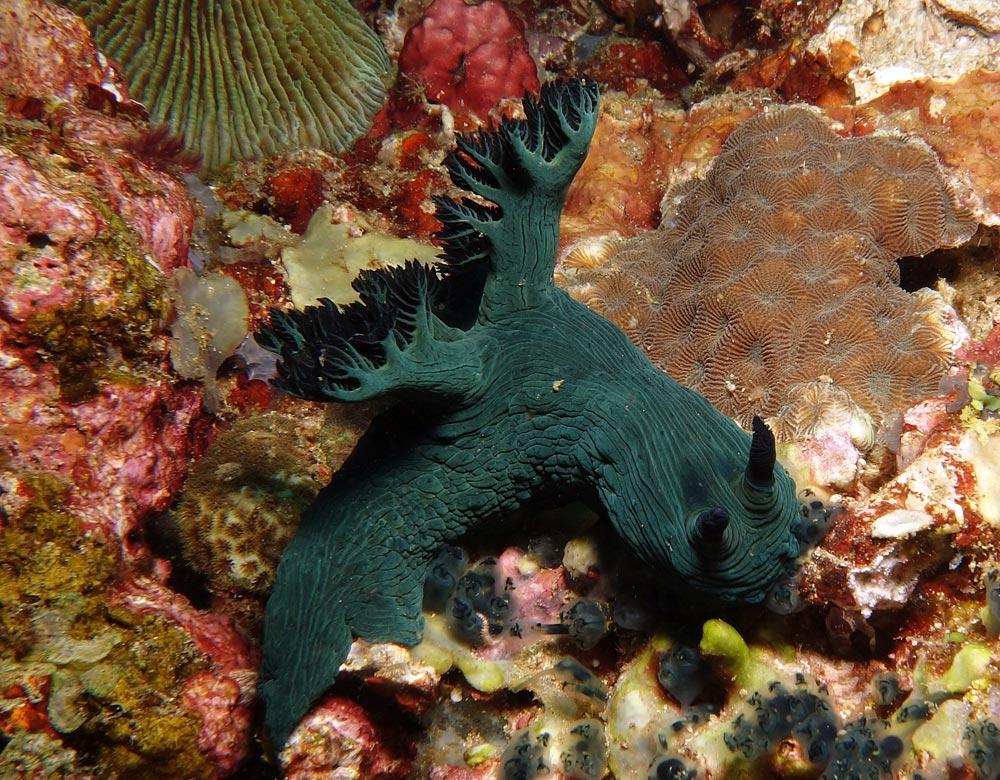 The non-retractile gills of the phanerobranch Nembrotha milleri have stout bases that continue up the exterior face providing a shield to protect the delicate filaments on the inside surface.

The phyllidiids belonging to the porostome group (suctorial feeders) are quite different. They do not have a true gill but rather, secondary gills in the form of triangular leaflets concealed and protected in the hyponotal groove, that region where the underside of the mantle overhang joins the main body wall. 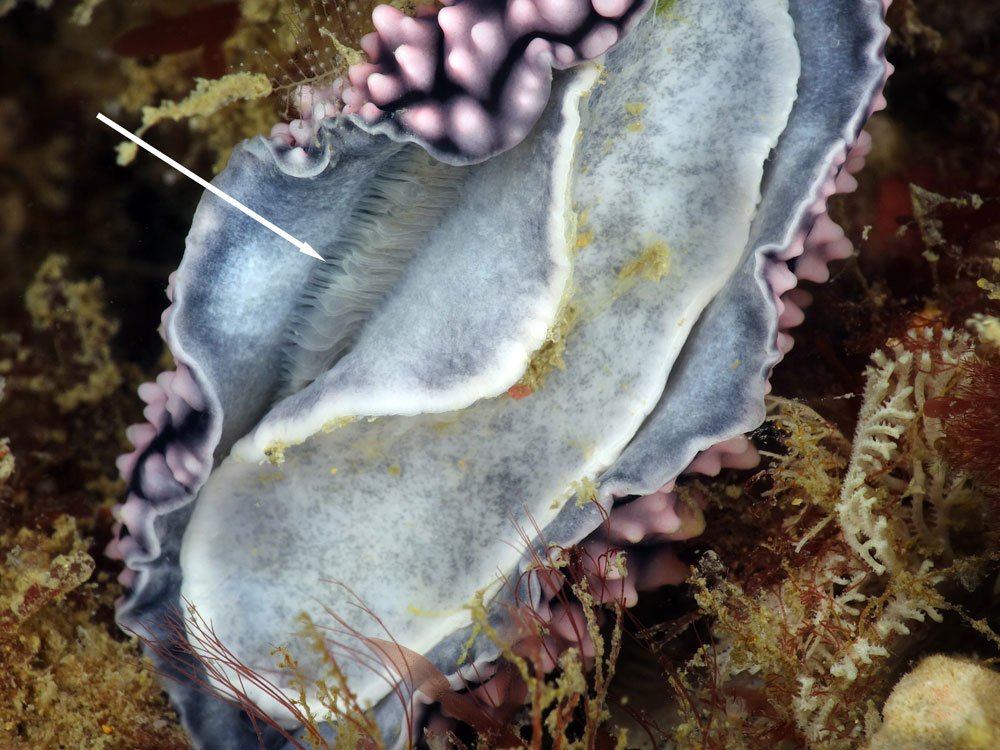 This ventral aspect of Phyllidiella pustulosa, a porostome dorid, shows the numerous triangular leaflets creating an extremely large surface area for gaseous exchange and thus acting as secondary gills, located in the hyponotal groove of the mantle overhang. A somewhat similar arrangement is possessed by the Armina, cladobranchs of the Arminina group, but not the Dermatobranchus of the same group that lack any secondary gills.

Among the cladobranch nudibranchs:
The other major group of true nudibranchs, the cladobranchs (branching gills), have evolved a different strategy. In this group the true gill is lost. Most have structures that are referred to as secondary gills. These are either arranged longitudinally down the notal edge as branched “feathery” appendages as in the dendronotids or as cylindrical cerata as in the aeolids. Either way the large surface area provided enables sufficient gaseous diffusion and the usually larger number of these secondary gills and their dispersion provides a higher level of functional survival from an attack than the – “all the eggs in one basket” – single gill of the dorids. 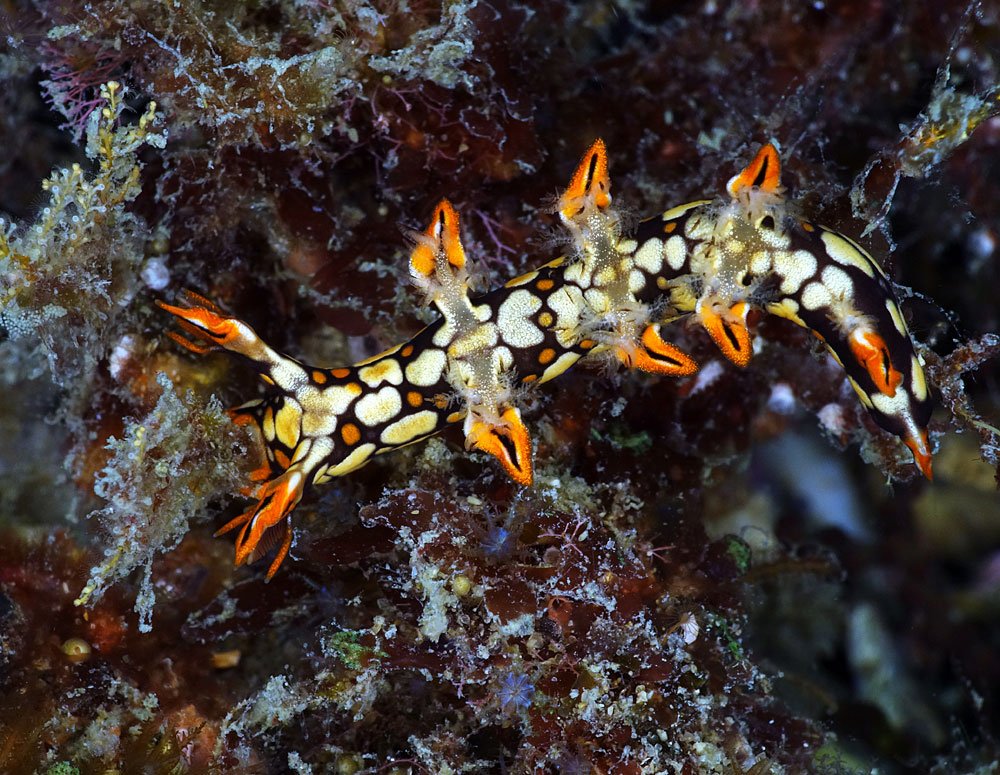 Bornella anguilla, a dendronotid cladobranch, is a good example of possession of several secondary gills located each side down the length of the body. Each translucent secondary gill sits inside of and is protected by a colourful decoy appendage. Damage by an attack on one or two is not catastrophic for the nudibranch. 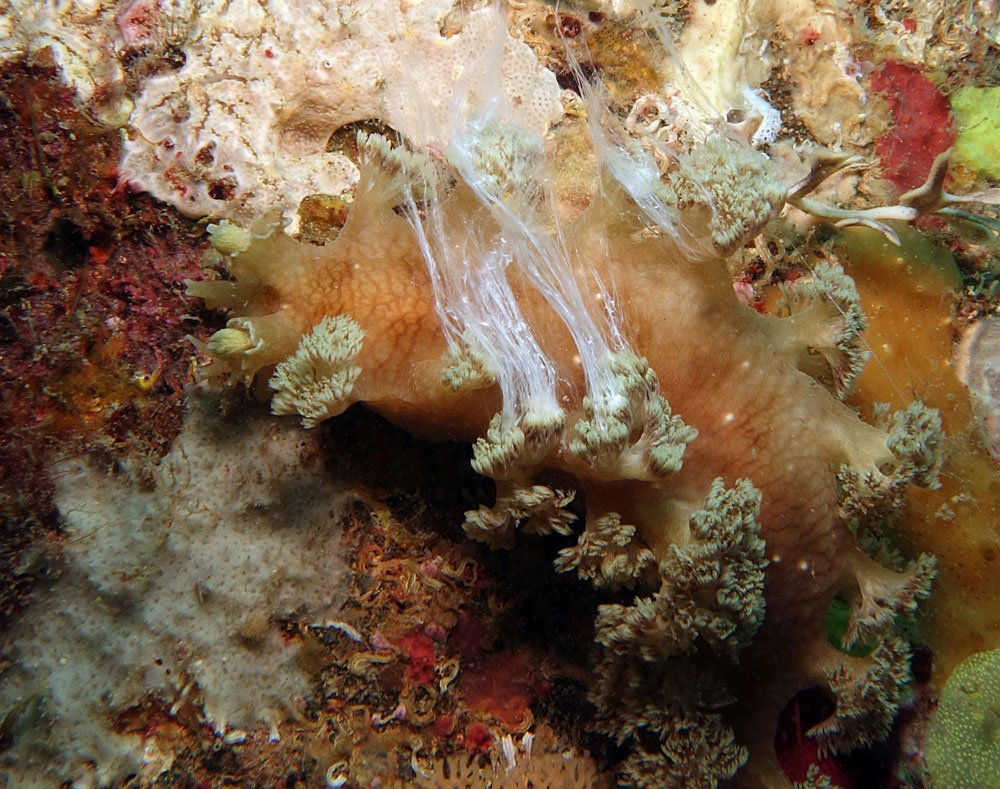 A dendronotid, Marionia sp., protects its secondary gill structures by releasing defensive chemicals when aggravated. These chemicals are contained in the mucus strings that can be seen streaming off the “gills”. The possession of multiple bushy “gills” ensures that plenty survive an unexpected attack to carry on respiratory function. 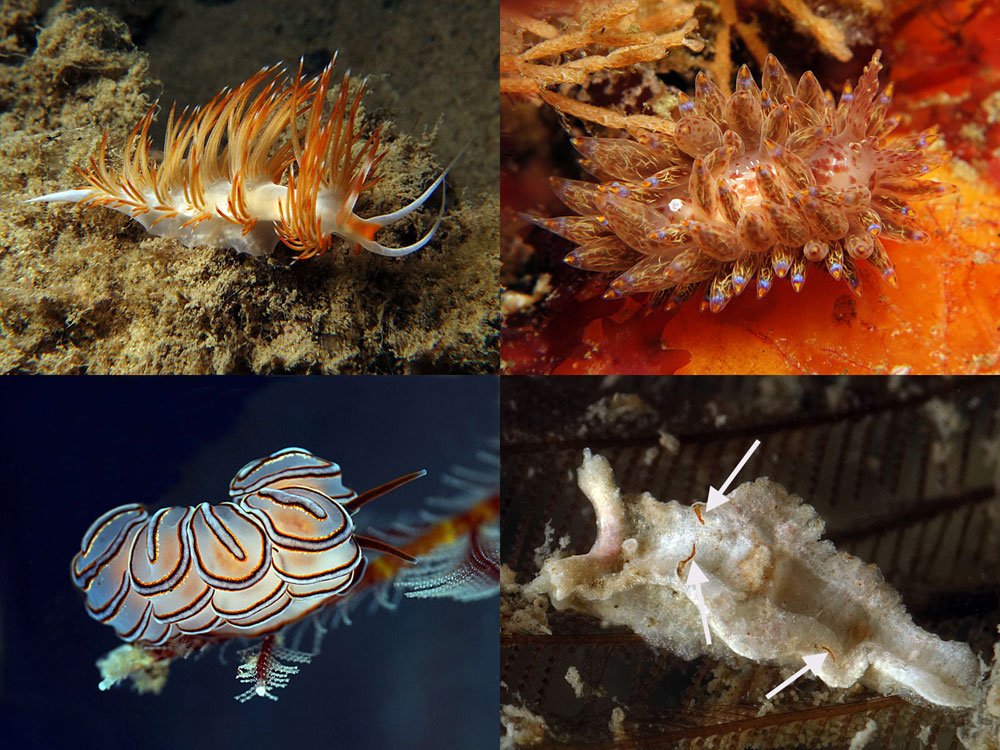 More examples of cladobranch secondary gills. Here, part of the strategy is to possess many processes such that a strike by a predator will not take out the whole respiratory system in one go.
– Upper left: Sakuraeolis nungunoides, a typical aeolid with many long and thin cerata that substitute as secondary gills, along with a number of other functions.
– Upper right: Janolus sp., belonging to the Arminina group, also with many cerata creating a large surface area for secondary gill function.
– Lower left: Doto greenamyeri, a dendronotid with large inflated cerata. Along with most Doto species it possesses pseudobranchs (secondary gills) located at the medial base of the cerata.
– Lower right: Lomanotus sp., a dendronotid with a different presentation having much reduced processes but with the thin red retractable tendrils, arrowed, that possibly act in a respiratory function instead.

Across the third subgroup of the cladobranchs, the arminids, (not a natural grouping) several methods are utilised. Some examples include: the Armina, that have secondary gill leaflets under the mantle in the hyponotum just like the phyllidiids except they are only located anteriorly but with additional “folds” medially and posteriorly; the Dermatobranchus, that have no secondary gill structures relying instead upon simple diffusion through the large surface area of their mantle and body wall with large haemolymph sinuses located just below the integument; and Janolus and Madrella for example, that possess numerous cerata on the notum.

It could be argued that not having to rely on gills is the best way to defend them.
– Left: Vayssierea felis being such an extremely small species of phanerobranch nudibranch that sufficient gaseous exchange can be achieved through the thin integument making gills unnecessary.
– Right: Dermatobranchus ornatus, along with the rest of the genus members, possess no secondary gill structures, even in the hyponotum. Large haemolymph filled sinuses lie close to the integument permitting sufficient gaseous exchange.

As with all things in nature there are many ways to “achieve an outcome” everyone of which has evolved through changes wrought by selection pressure in their habitat.