The Chelidonura sea slugs belong to the Aglajidae family (the tailed sea slugs) of the Cephalaspidea order – known as the Headshield Slugs. They are distinguished by having essentially a cylindrical and streamlined body, a broad headshield usually with sensory cilia arranged on the anterior edge, well-developed parapodia that fold up over the sides of the body to meet, or almost meet, on the midline and two elongated caudal lobes or “tails” (extensions of the posterior shield) with the left being distinctly longer than the right. The molecular sequencing work of Aglajidae by Zamora-Silva, A. & Malaquias, M. A. E. (2018), amongst other changes, moved several of the then Chelidonura species into newly erected genera – Mariaglaja, Biuve and Camachoaglaja. A number of anatomical features were originally used to group all those species under Chelidonura including “… shared presence of a narrow and elongated body, a tri- or quadrilobed anterior shield, calcified shell, a small non-eversible buccal bulb, a single lobed mucous gland and a simple penis …” so that “The separation between Chelidonura s.s., Camachoaglaja and Mariaglaja based on external features is difficult …. The main differences are molecular, anatomical and in part conchological.” (Zamora-Silva, A. & Malaquias, M. A. E., 2018).

Chelidonura amoena escaped the relocation and exhibits all of the above features except for any readily obvious anterior sensory cilia. The headshield is broad and lobed at the antero-lateral corners creating a tri-lobed appearance. The parapodia touch or barely overlap on the midline. The left caudal lobe is three to four times the length of the right lobe. It presents with a white background colour bordered by pale yellow margins to the headshield, parapodia and posterior shield including the tails. These margins may or may not be sharply delineated, sometimes tending to blend into the white. The white background colour is overlaid with a fine grey or brown reticulum of varying intensity and distribution such that the underlying white shows through as small spots. There have been a number of colour variations reported. Apart from the “typical” presentation two others are illustrated here – one with a dense black reticulum and another with quite sparsely distributed brown spots. Chelidonura amoena possesses a reduced, thin and calcified internal shell that is basically expanded and flattened in shape.

As with all sea slugs Chelidonura amoena is a hermaphrodite possessing both male and female sexual organs. The male copulatory organs are located at the right anterior corner of the head whilst the female genital pore is also on the right side but towards the posterior end of the body. Conjugation occurs head to tail (whereby the front animal acts as the female and the rear animal as the male) and they may form a “mating chain”. Other times a pair can be seen curving around upon each other forming a circle so that they mate simultaneously. As it is released, the transparent spawn string containing the eggs is wrapped around the body with the slug eventually forming it into a cocoon that is tethered to the substrate by a mucous string. Large breeding aggregations have been reported from time to time.

Diet is believed to consist of small acoel flatworms just like many of the Chelidonura genus.

Distribution is essentially tropical Western Pacific having been recorded from Japan down through the Philippines, Malaysia, Indonesia, PNG and both east and west coasts of Australia. Chelidonura amoena was described from specimens collected off southern Sulawesi, Indonesia in 1899.

The aforementioned characteristic of varying colour intensity has led to the suggestion that perhaps another, more recently described species – Chelidonura electra Rudman, 1970 – is actually only an extreme variant of Chelidonura amoena that lacks any of the darker overlaying pigment or that those that might be considered intermediate forms are hybrids. Chelidonura pallida Risbec, 1951 is another similar-looking species but that species has distinctive black and gold lines around the margins of its otherwise white body and appendages. These three species were molecular sequenced (Zamora-Silva, A. & Malaquias, M. A. E., 2018). and although quite closely clustered were nevertheless, tabled as distinct. 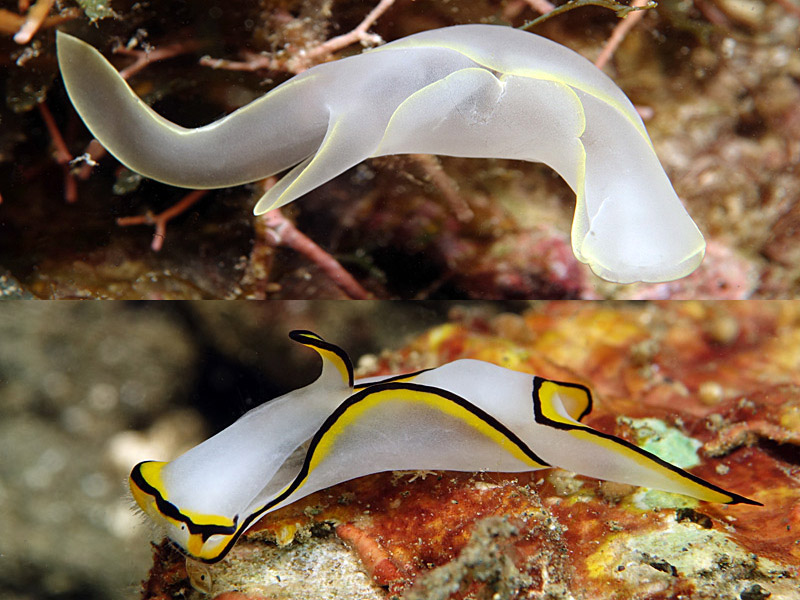 – Rudman, W. B., (1970). Chelidonura inornata Baba and C. electra sp.nov. from the Solomon Islands (Opisthobranchia, Aglajidae). Journal of the Malacological Society of Australia, 2: 7-12.

– This Species Profile has been modified from:
Opisthobranch of the Week, Week #935, Chelidonura amoena (07/09/2015), Mike Miller’s slugsite.tierranet.com by David A. Mullins.

Other Sea Slugs in this Family (sighted)

Not what you are looking for? Try a search!