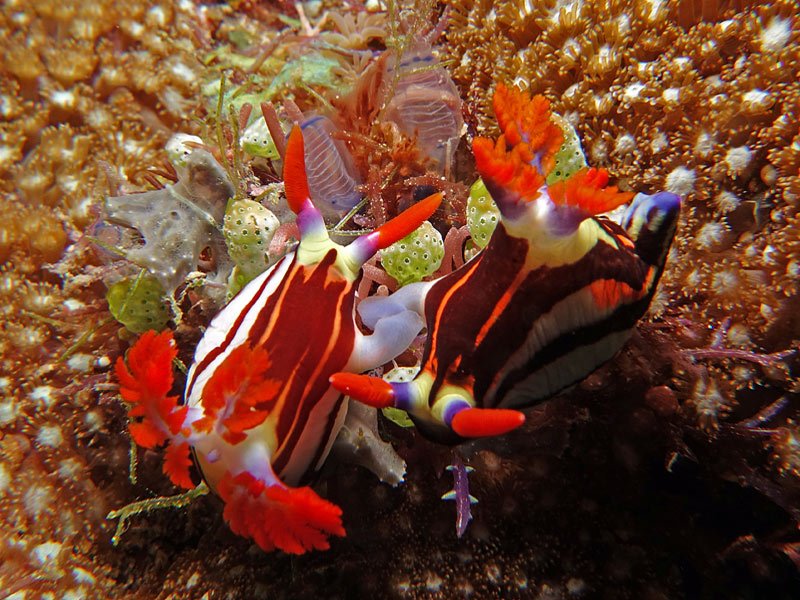 Nudibranch aficionados, those individuals who spend their time searching the ocean floor for the slimy objects of their desire, will at sometime or other have come across pairs of them conjugating. Because they fertilise internally (with a few exceptions) they must orient themselves to bring the appropriate parts into alignment for the process to be successfully undertaken. In many instances then, when two are found together in the correct alignment, the swollen connected gonopores will be readily apparent to the observer – these are the Rudie Nudies. 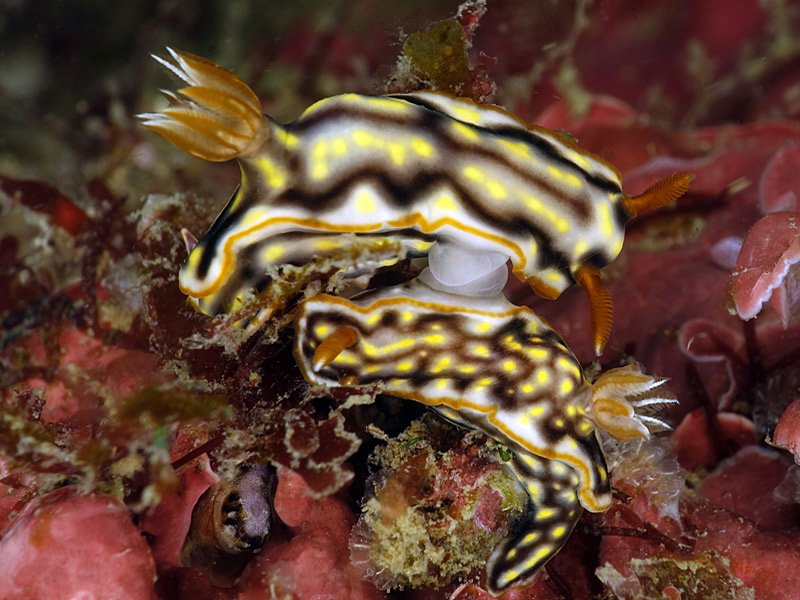 The classic Rudie Nudie presentation. A pair of Hypselodoris jacksoni nudibranchs, overlapping, right side to right side with their swollen gonopores aligned and connected, swapping allosperm to fertilise each other. 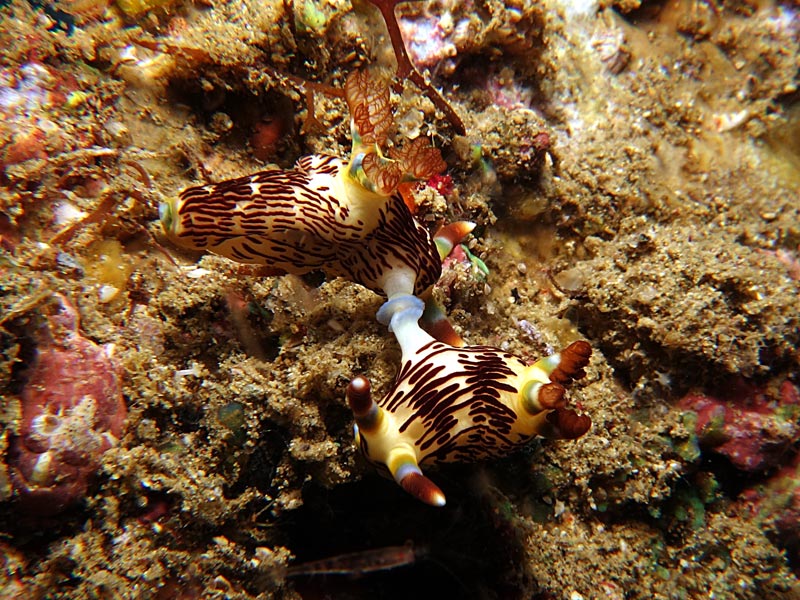 The polycerid nudibranchs Nembrotha lineolata are mating. The conjugation has an almost “at arms length” look about it with the gonopores fully extended. They will separate after cross-fertilisation and each will then lay its own egg spiral. 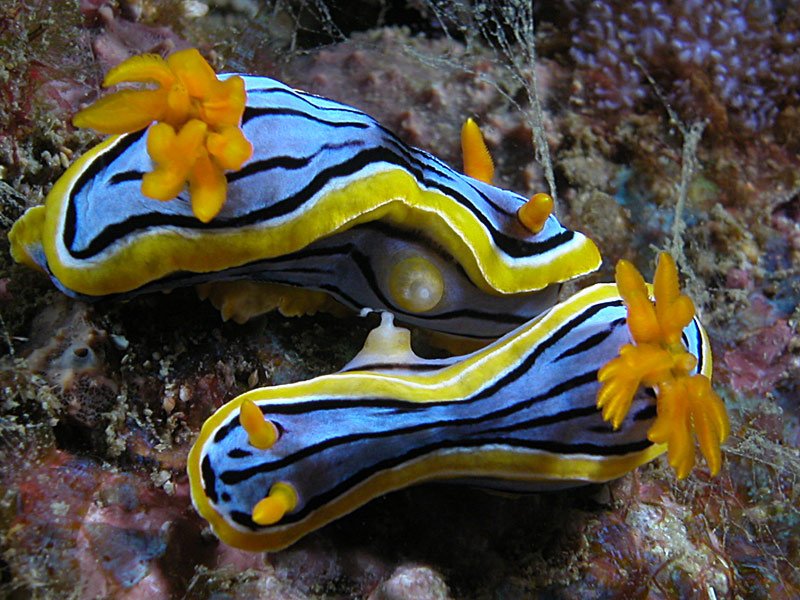 Chromodoris elisabethina nudibranchs finish their mating session by moving way from each other pulling apart the connected gonopores that facilitated the reciprocal transfer of sperm to each other. 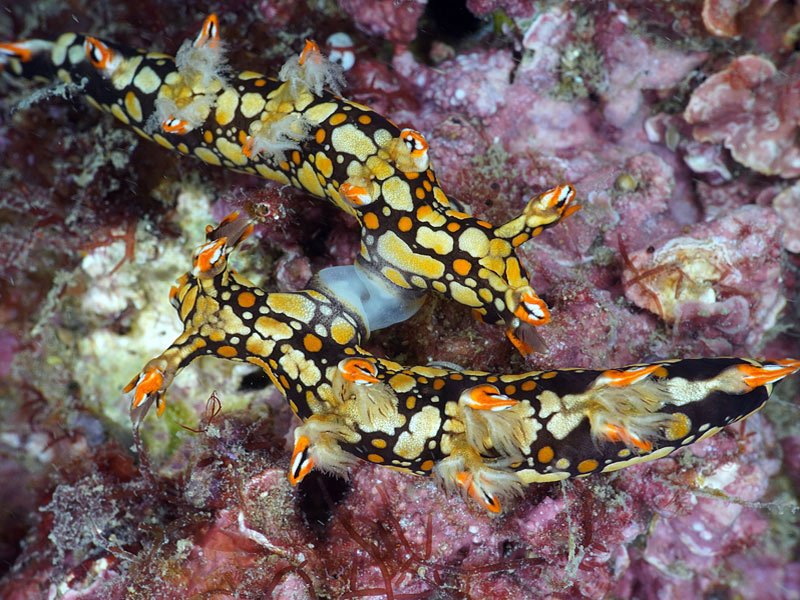 Here a pair of the dendronotid nudibranchs, Bornella anguilla, are photographed mating. Sea slugs will most usually take every opportunity to copulate due to their often dispersed and low level populations.

Above: A pair of Tambja victoriae in the latter stages of mating. Here the simultaneous sperm transfer is completed and the penis stylets can be seen to disengage as they separate.

Simultaneous Hermaphrodites
All adult sea slugs (with very minor exceptions) are simultaneous hermaphrodites. This means they possess both male and female sexual organs at the same time, producing both types of gametes (ova and sperm) from their common gonad, the ovotestis, and exchanging with a partner, the sperm produced, via reciprocal copulation. Having stated that generalisation it should be said that certain groups, mentioned below, do not fall entirely within that category. Some instead mate unilaterally, that is with one acting as the male and the other the female, at that point in time, this behaviour being a consequence of their anatomy. Also, some species may exhibit a degree of protandry during the path to adulthood whereby the male organs mature and are functional earlier than the female organs but the animal still copulates. It is suggested that the received sperm is stored (anywhere from weeks to months) until such time as the ova have matured and other conditions are suitable for fertilisation to take place. There is no sex change – known as sequential hermaphroditism – during the life of sea slugs. 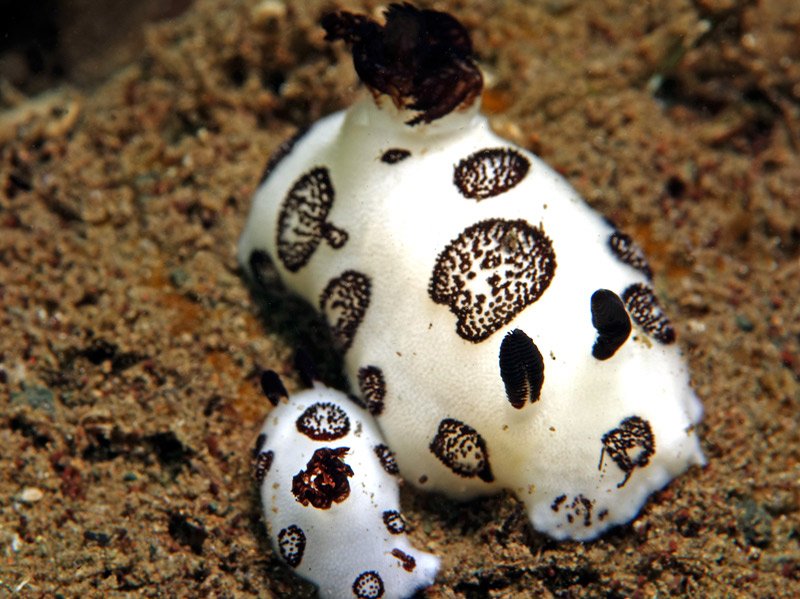 Sometimes a small nudibranch will be seen mating with a very much larger member of its species such as this pair of Jorunna finebris. This could be an example of protandry, where the small specimen has mature male organs but not female. The received sperm is stored until such time as the female ova are ready for fertilisation. 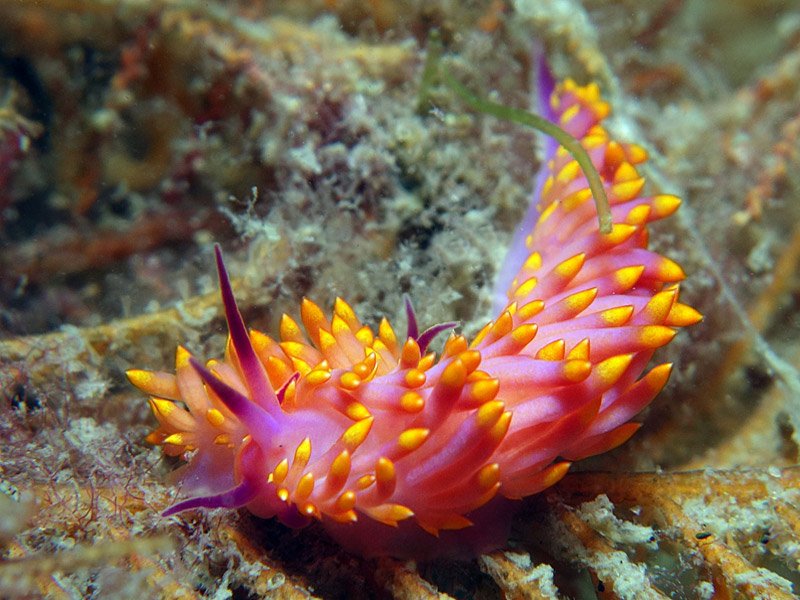 A large and a small specimen of Tenellia sibogae are mating. This could be a protandrous coupling.

Self-Fertilisation?
The question that intrigues many people is: “Being hermaphrodites, do sea slugs therefore self-fertilise?” The answer is, a very small number of exceptions aside, no, they do not. A number of aspects including behavioural, morphological and the timing of gamete maturation, in combination, help facilitate the prevention of self-fertilisation.

If one thing could be said to be consistent in the reproductive arrangements across the sea slugs it is that there is no consistency. The reproductive system is considered to be extremely complex in morphological structure and highly variable, so much so that the diversity embodies important characteristics in helping to delineate taxa. Much of the complexity is associated with handling both autosperm (endogenous or self-generated sperm) and allosperm (exogenous or sperm received from others) in order to prevent self-fertilisation. Detailed descriptions of all the systems are well beyond the scope of this NudiNote. 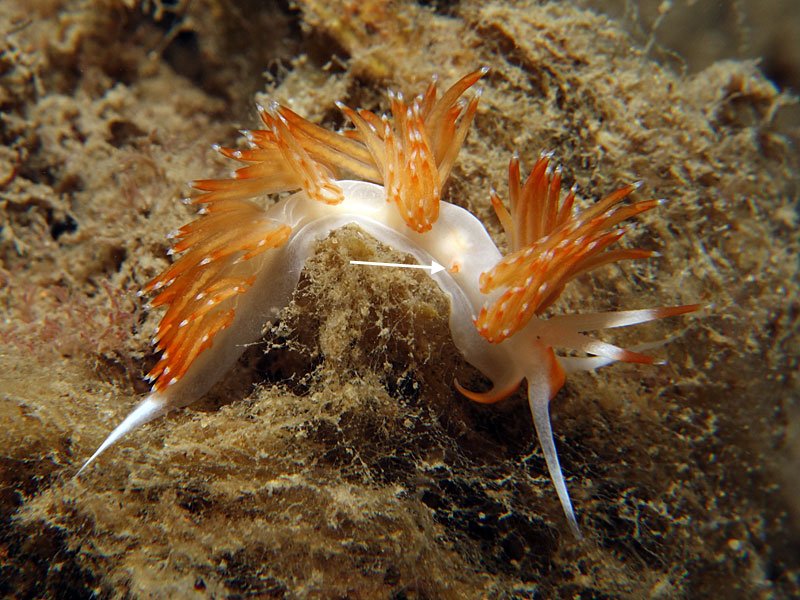 This image serves to indicate the position of the genital organ of the true nudibranchs. Here, the aeolid Sakuraeolis nungunoides has its penis partially everted. This location therefore requires the two involved to overlap right side to right side in order to bring the genital organs into alignment.

Mating Positions
Mating time can vary from fleeting to hours depending upon species and size/maturity. Across all the various sea slugs there are three basic copulatory positions adopted – right side to right side, head to head and head to tail with the latter being either a reciprocal or unilateral process depending upon flexibility of the species or even partner aggression. These mating positions are, naturally, determined by the location of penis in relation to vagina. All sea slugs have the copulatory organs situated on the right side but they may be anterior at the head, on the side of the body or much more posterior and in some cases having delivery and receptive components separated, almost at opposite ends of the animal. Interestingly, those with the penis and vagina separated, the more primitive types, the autosperm still exits the genital aperture, shared with the vagina, but is then transported anteriorly to the penis, located at the head, via an external ciliated seminal groove.

Some Examples
The true nudibranchs have both male and female copulation organs located together, the gonopore, on their right side below the mantle on the body proper, nominally behind the head region so that they align themselves right side to right side with their “heads” overlapping and the connected swollen gonopores between being most often visible – the classic Rudie Nudie. Most nudibranchs are considered semelparous – having a single period of repeated spawning in their lifetime before death – (some small aeolidiids being the exception). Many though are known to undertake multiple matings. 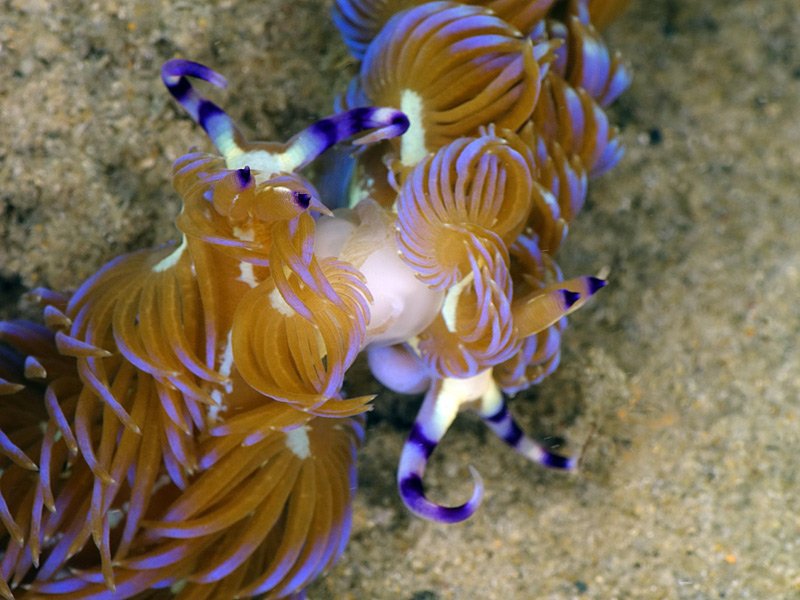 Aeolid nudibranchs too, mate reciprocally. Here a pair of Pteraeolidia semperi exhibit their extremely swollen gonopores as they engage in swapping sperm. 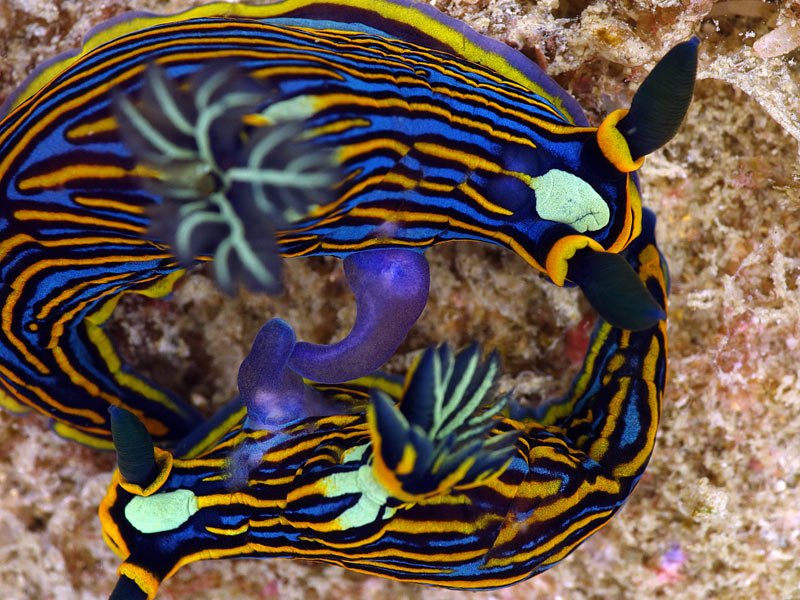 A pair of Tambja victoriae nudibranchs in the process of disengaging from copulation. The lower specimen has withdrawn its penis from the upper specimen. The upper specimen is still connected beneath the flap of the lower.

Head to head mating is performed by those sea slugs with their copulatory organs located anteriorly on the head. Examples of those engaging in head to head copulation include some of those referred to as side-gilled sea slugs. Umbraculum umbraculum of the Umbraculoidea order has the penis and female aperture in a cleft on the midline so they are observed mating directly head on. Others like Tylodina corticalis and some of the Pleurobranchidae will be seen head to head but slightly offset. Sometimes those sea slugs with shells, such as the sacoglossan Lobiger viridis, will engage in head to head copulation but it is almost impossible to ascertain if they are engaged reciprocally or unilaterally. 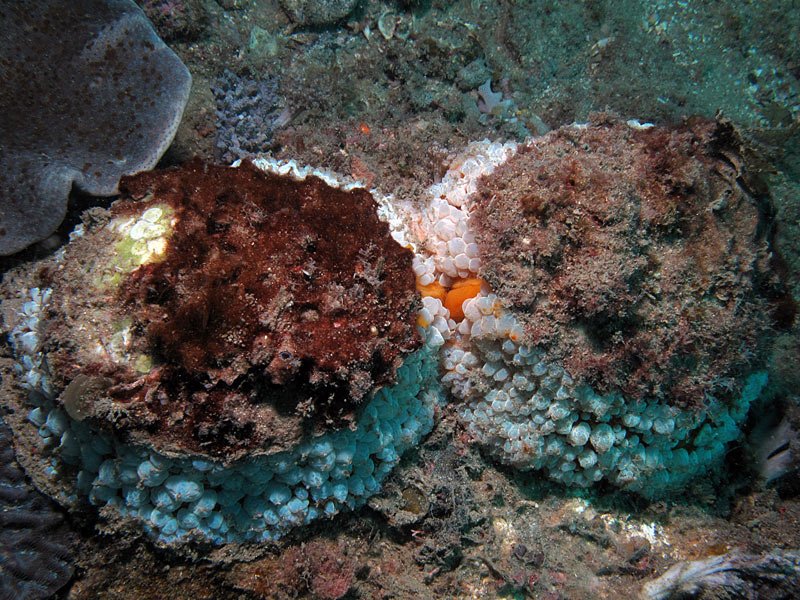 The unusual umbrella shell sea slugs Umbraculum umbraculum. The copulatory organs are located in a cleft anteriorly at the centre of the head necessitating direct head to head mating. 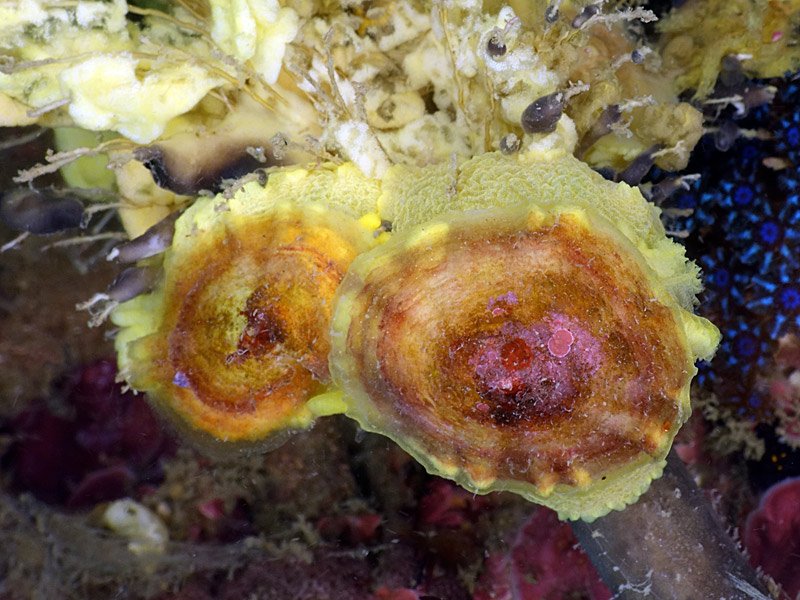 The umbrella shell sea slugs Tylodina corticalis mating slightly offset from the head to head position. The copulatory organs are located anteriorly offset to the right. They locate each other on their sponge food source. 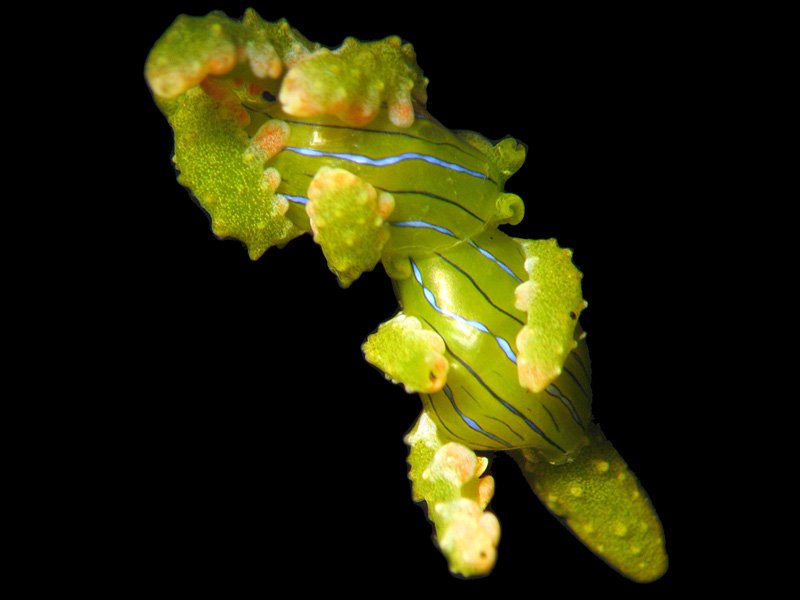 The shelled sacoglossan Lobiger viridis engaging in a head to head position for mating. 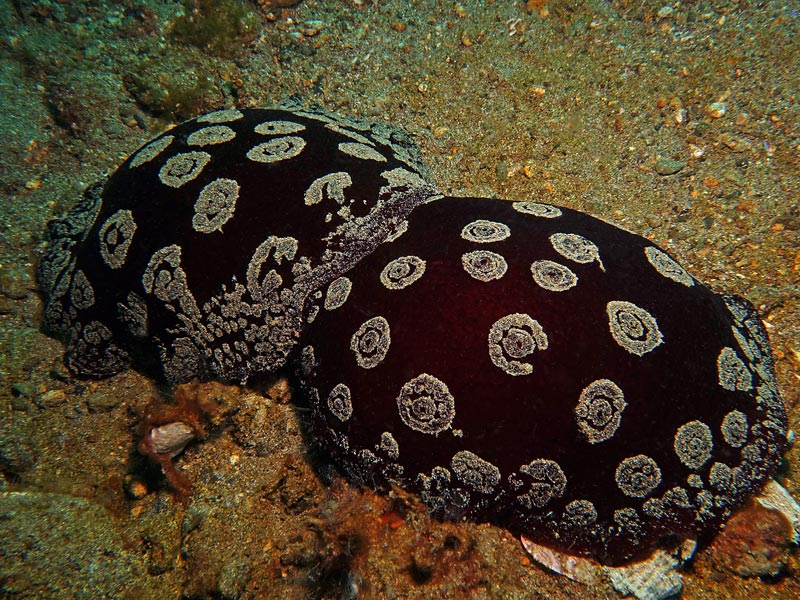 Examples of head to tail mating include the aglajids such as Mariaglaja inornata that happens to be flexible enough to form a mating ring of two (their pre-mating posturing and circling is fascinating to observe) and the gastropterid Sagaminopteron ornatum that is known to both copulate unilaterally one behind the other or for a circle of two to be formed for reciprocal mating. They possess a long penis that reaches forward from their head to pass in under the posterior end of the right parapodia and into the vagina of their partner’s gonopore. The Aplysiidae sea hares too, require a head to tail mating position and they have been observed forming long chains of individuals where the one in front acts as female and the one behind male so that apart from the first and last in the chain all of those in-between are mating reciprocally albeit, with different partners. 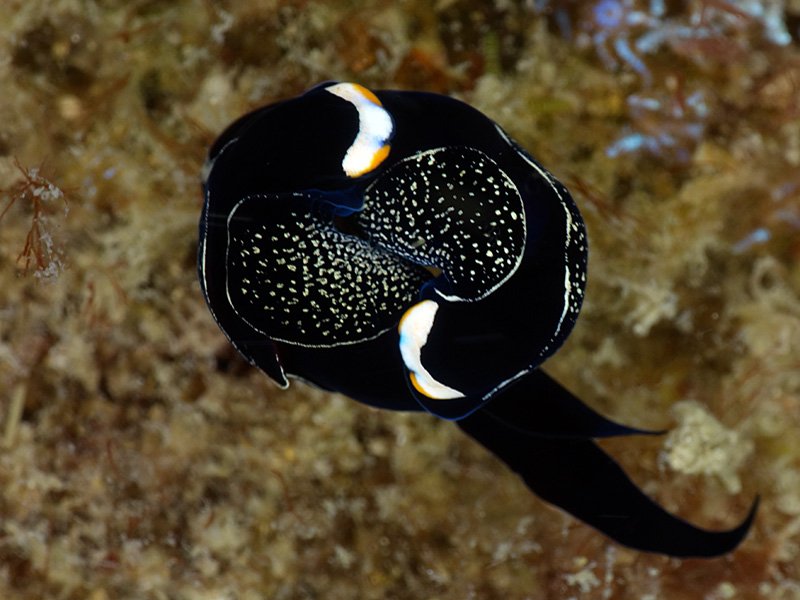 Most aglajids mate head to tail due to the separation of their copulatory organs, the penis anteriorly at the head and the vagina posteriorly inside the right parapodium. Here a pair of Mariaglaja inornata sea slugs have formed a circle to achieve that object. 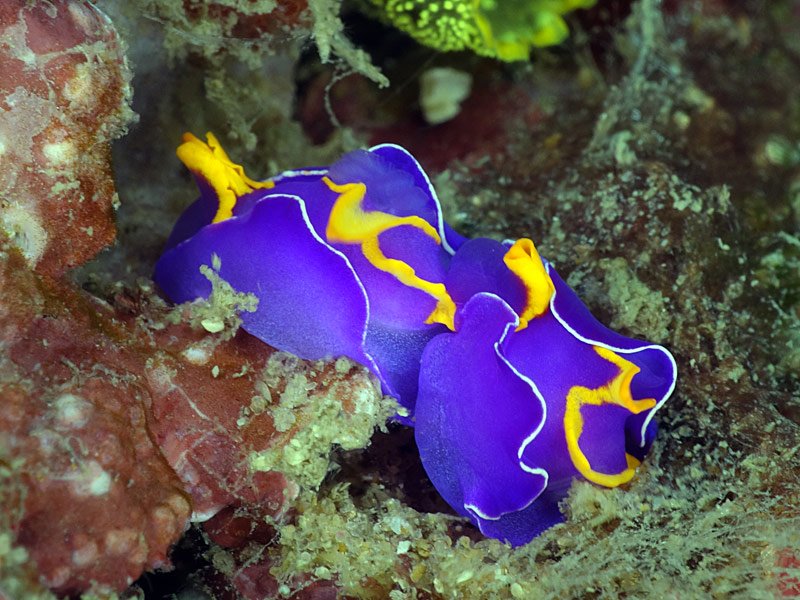 The gastropterid sea slug Sagaminopteron ornatum will sometimes form a circle of two to achieve reciprocal mating, or at other times as illustrated here, act unilaterally as a male by approaching from behind to copulate with another acting as a female.

Hypodermic insemination (also referred to as traumatic insemination) is a method performed by a number of sea slugs including many members of the Sacoglossa, some of the Polyceridae and some of the headshield gastropterids e.g. Siphopteron. The penis bearing a chitinous stylet is stabbed through the body wall to transfer sperm to the partner. The sacoglossan Elysia maoria is just such an example and copulation may be reciprocal where they line up side by side but then stab each other to hypodermically deliver sperm into the right parapodia or it may be unilateral whereby one will approach another and stab it anywhere in the body, essentially just foisting themselves upon the other and exploiting the situation. 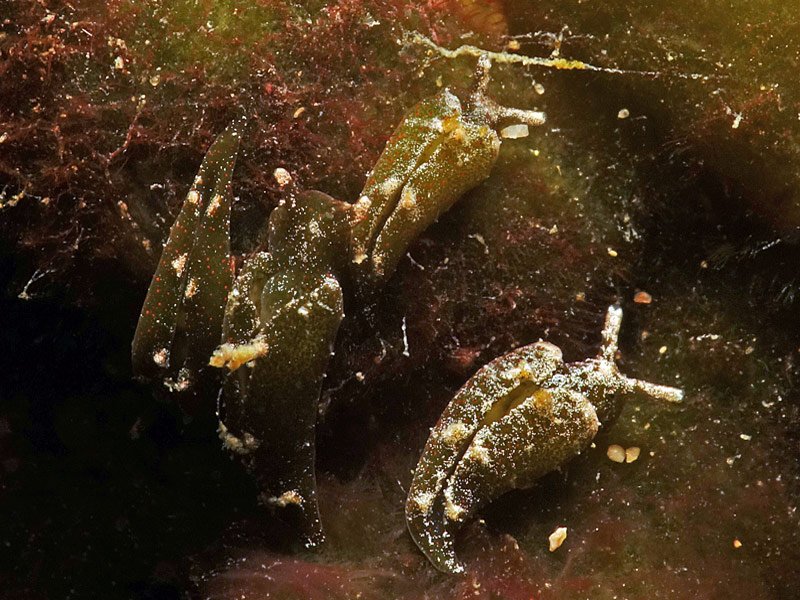 Here a congress of the sacoglossan sea slug Elysia maoria are feeding on algae. It won’t be long before they start mating manoeuvrings to copulate via hypodermic insemination either reciprocally or unilaterally. 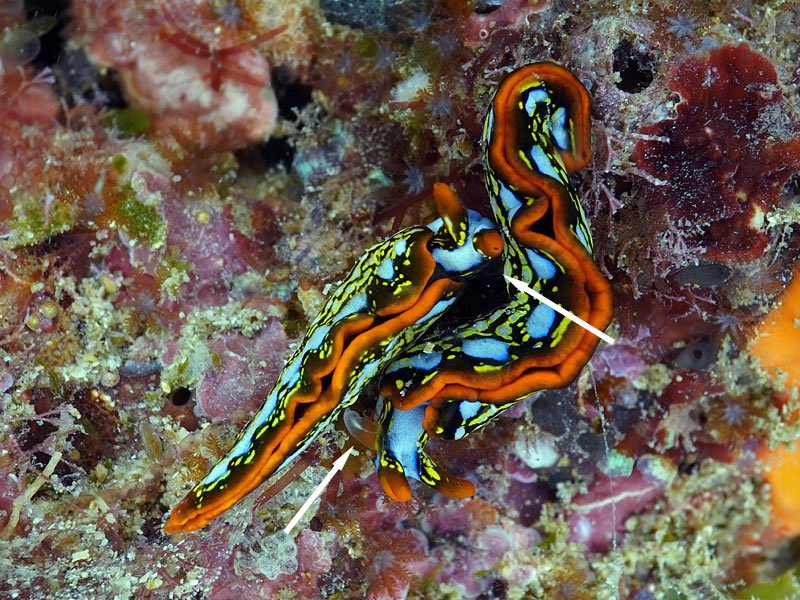 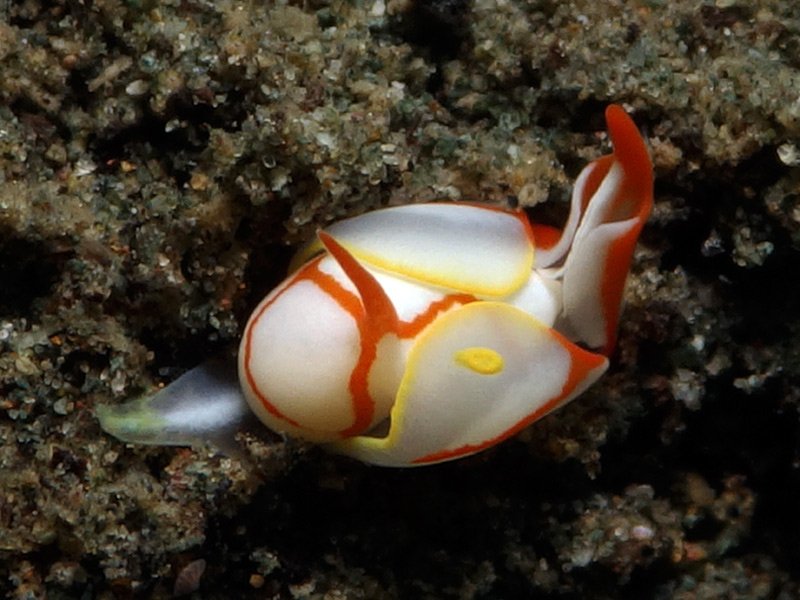 Siphopteron makisig is an unusual species even among the unusual species that mate by hypodermic insemination. Experimental observations have revealed that it will use its long penis to stab a mate in the head above the cerebral ganglion to deliver its sperm, leading to many conjectures about why.

Armed and disposable
The penis of sea slugs is most usually carried internally, or almost so, and for copulation is everted or protruded by haemolymph hydrostatic pressure. Some species possess what is referred to as an armed penis that carries hooks of various complexity believed to be an aid in preventing premature separation during copulation. Similarly, some have vaginas with chitinous spines. Neither of the former should in any way be considered a distress to the opposite gender because, remember, they are both in one. At least one species, Goniobranchus reticulatus, is known to autotomize the distal portion of its penis following copulation and to renew the remaining length, for further sessions, at least twice more.

Why hermaphroditism?
Although we tend to think of hermaphroditism as a strange and unusual condition in fact hermaphrodites are not uncommon among the invertebrates. Being a simultaneous hermaphrodite would double the chances of finding a mate and double the volume of sexually derived spawn eventually laid. These are definite advantages in situations of low and dispersed populations, low motility and short lifecycles. Sea slugs mostly have quite specific food sources so those food sources are definitely sites for the aggregation of specific species (a dating bar?). Some species have been reported to follow recognizable slime trails to locate a mate.

So the next time you spot a couple of Rudie Nudie Cuties aligning themselves you’ll be witness to the first step in creation of the next generation of the objects of your desire.

References:
– Reid, J. D. (1964). The reproduction of the sacoglossan opisthobranch Elysia maoria. Proceedings of the Zoological Society of London. 143:365-393.

– Valdés, A. (2004). Morphology of the penial hooks and vaginal cuticular lining of some dorid nudibranchs (Mollusca, Opisthobranchia). American Malacological Bulletin 18: 49–53.

– This NudiNote has been modified from a previously published article in Dive Log Australasia Magazine – NudiNotes Column, Issue: #392 (February 2022): pp. 10-12 by David A. Mullins.