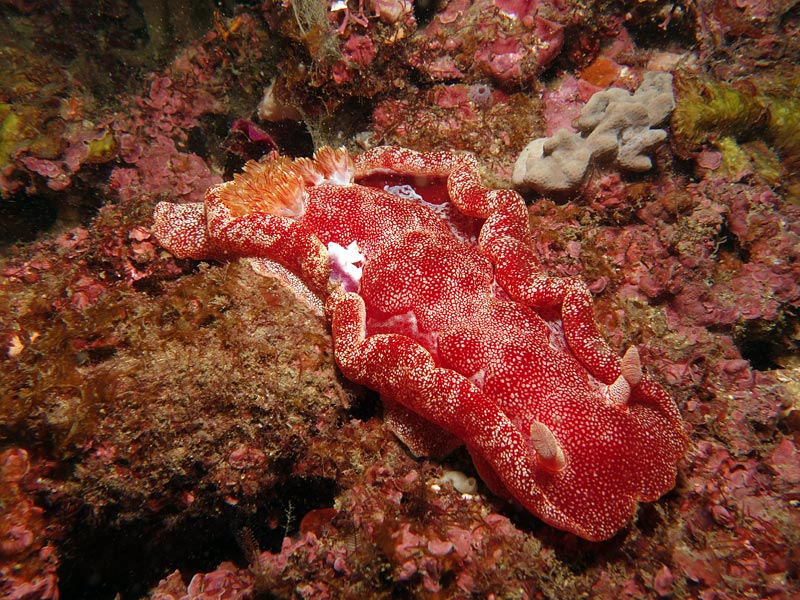 The name says it all. It has six gills – Hexabranchus, and is blood-coloured – sanguineus. This species was originally described from the Red Sea. Specimens from that region are not red and white mottled as in the images posted here but are a deep and uniform “blood” colour. 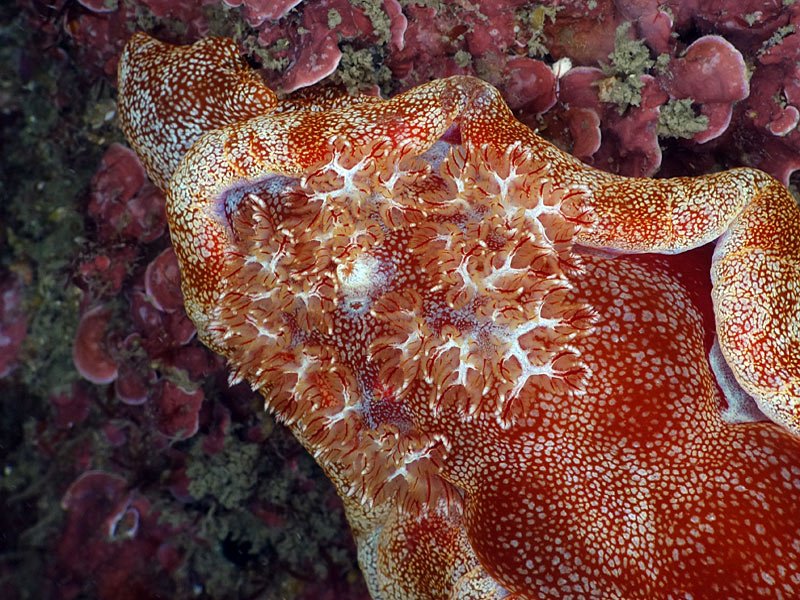 A closer view of the feathery gills located in a circle around the anus.

This nudibranch, also known as the Spanish Dancer because of the display it puts on when disturbed, is unusual among the dorids in having six separately inserted gills. These are arranged posteriorly on the dorsum in a circle around the anus and each one can contract into its own “pocket” for protection. However, it has recently been considered a phanerobranch and not a cryptobranch because those gill “pockets” do not close over to completely cover the contracted gills. With the cryptobranchs, the separate branches of the gill are joined at the base forming a single entity that retracts completely into a common pocket beneath the mantle. 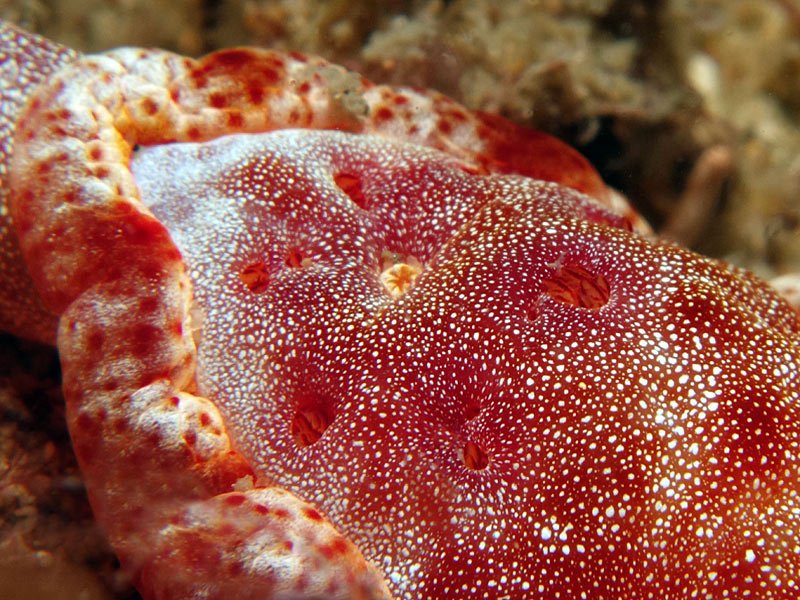 The six gills referred to in its scientific name is a generalisation as the number can vary either side of that number, notwithstanding that it is also possible that a fish may take a bite and nip off one or more.

In juvenile specimens it is interesting to note that the surface of the mantle in-between the six separately inserted gills is often quite translucent and that their pockets have a slightly raised rim that seem to join up forming a ridge. Rudman, in 2006, has suggested that it is worth investigating whether this is indicative of a remnant gill pocket, noticeable in juveniles, that has been lost in the evolution of the species and asks: “Does that make Hexabranchus a very special cryptobranch, or does it suggests that it is a link between the two groups, indicating that the phanerobranchs evolved from the cryptobranchs?” 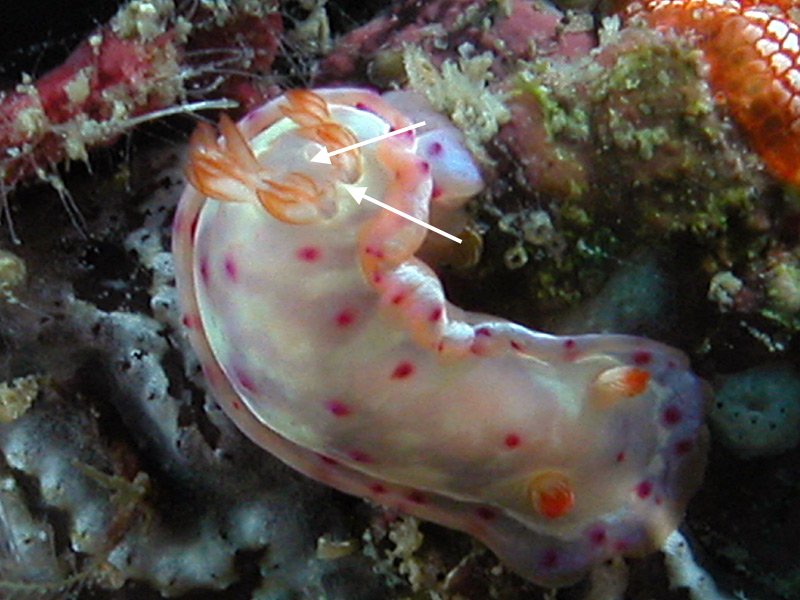 A juvenile Hexabranchus sanguineus. The white arrows indicate the translucent region inside the ring of separately inserted gills and also the slightly raised rim of their pockets that would seem to form an almost continuous ridge encircling the region. See comments in the text about the possible indicators these might be of evolutionary progress. 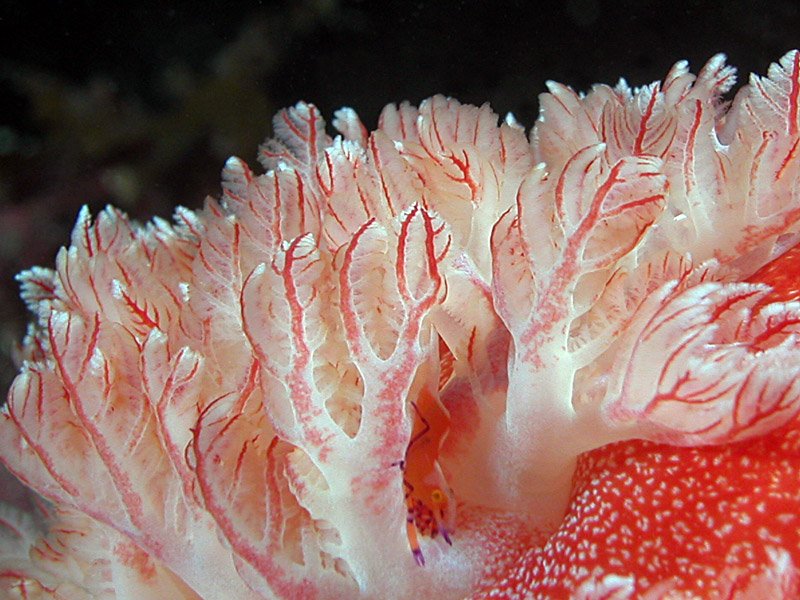 A close up of the expanded feathery gills showing the extensive branching. At times, juvenile shrimp may be found hiding in amongst them feeding on the nudibranch’s mucus and fecal particles. 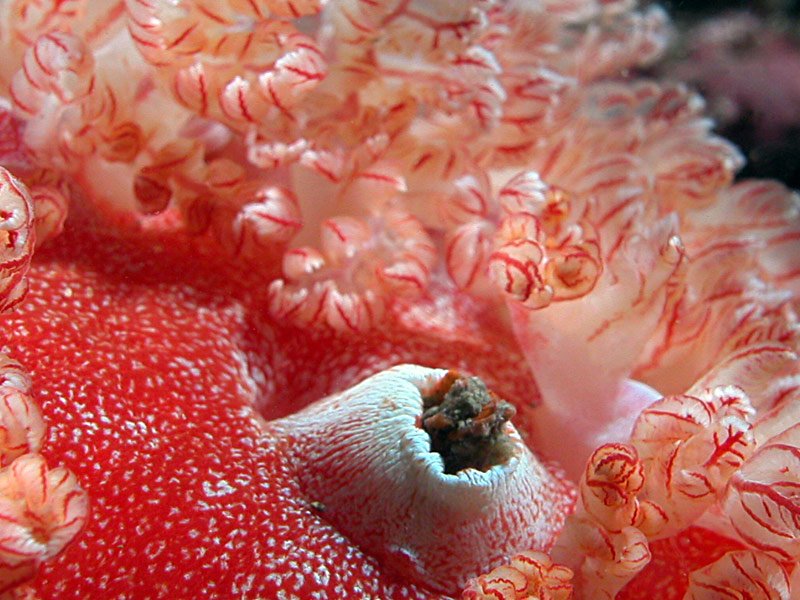 The anus is located in the centre of the ring of gills. Here, the nudibranch is caught in a scatalogical moment.