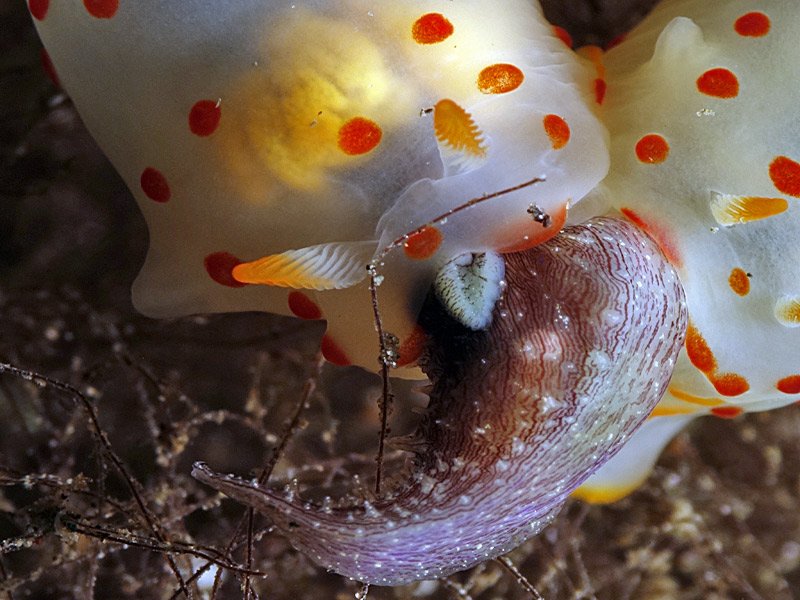 The great majority of sea slug species are carnivorous, meaning they prey on animal life rather than plant life. It is often not appreciated that sponges, bryozoans and hydroids etc. although primitive life forms, and appear to grow like plants, are animal life forms all the same. Some species of sea slug have evolved to prey on animals that are also sea slugs. They are what Dave Behrens called “slugivores” in his excellent work: Nudibranch Behaviour.

When first learning of this slug eating slug behaviour many people immediately cry out: “Oh, so they’re cannibals then!” This is not necessarily correct unless of course they eat their own species, which does occur in a few situations. They are not exclusively cannibals; it would be unsustainable. (Cannibalism is common in the marine environment however it is too complex a subject to cover adequately here.) 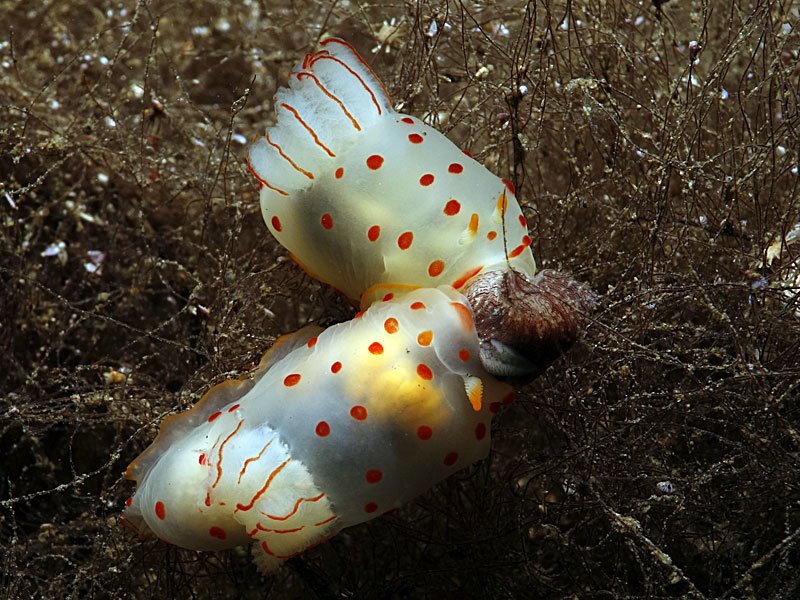 Two specimens of Gymnodoris ceylonica fighting for a share of a luckless sea hare, Stylocheilus striatus.

The best known of the sea slugs that prey on other sea slugs are those of the Gymnodorididae Family believed to contain more than 90 species, although only a third of these are currently described. All of the gymnodorids are voracious predators and in nearly all cases that prey is other sea slugs. Depending on the size of their sea slug prey they will either engulf it whole, bite off a piece or eat their way into the viscera and devour the doomed sea slug from the inside out. Small gymnodorids are not deterred by a large target (probably not even appreciating the size of the animal they have attacked) often getting a good grip and hanging on as the victim convulses or takes off across the substrate in an attempt to dislodge the attacker. They hunt down their prey by following the slime trail that all sea slugs deposit as an aid to locomotion. Research has shown though, that on coming upon a slime trail the gymnodorid has no appreciation of which direction its intended prey is travelling. Across the gymnodorids there is a diverse appetite of sea slug types that are predated upon. Gymnodorids smaller than their prey are known to attack the chromodorids beneath the mantle into the body wall or via the gills thus avoiding the toxic defensive glands in the mantle. Those that attack cerata-carrying aeolids will also often do so via the body wall. Larger species however are known to bite off pieces of the mantle seemingly unaffected by the noxious/toxic defensive glands. There are some gymnodorids that are even known to consume other gymnodorids and also the eggs of other gymnodorids. The spectre of true cannibalism however does raise its head in this family with Gymnodoris citrina, from time to time, being a known culprit. 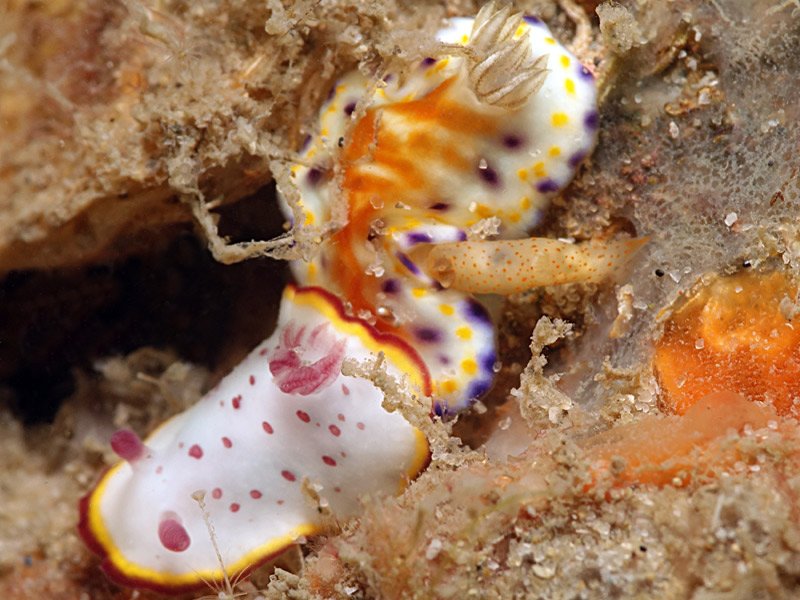 A small undescribed Gymnodoris attacks a much larger Goniobranchus collingwoodi under the mantle avoiding the noxious defensive glands. It was dragged around the substrate by its victim as it ate its way into the body. The Goniobranchus daphne in front, beats a hasty retreat. 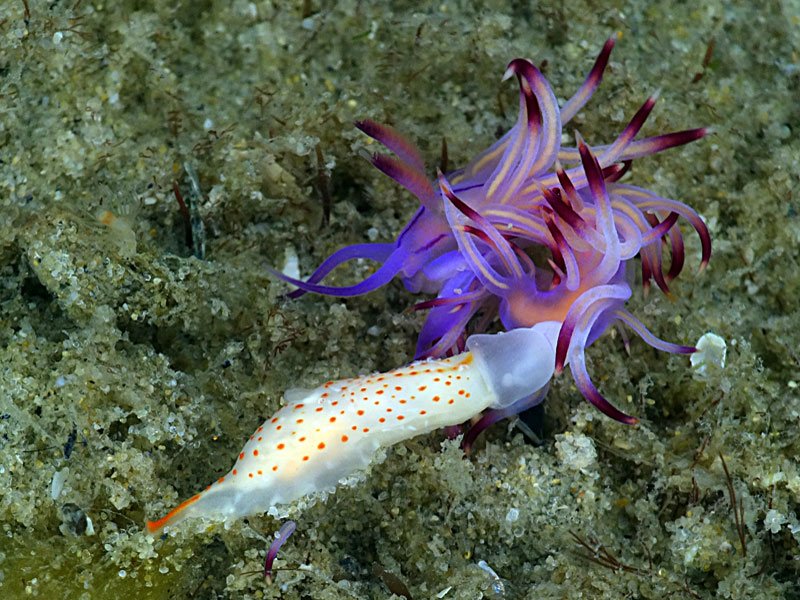 Flabellina (Coryphellina) rubrolineata in a battle it won’t win with an undescribed Gymnodoris. The Gymnodoris has launched the attack beneath the line of the defensive cerata. An autotomized ceras, shed in the hope of creating a distraction, lies in the foreground ignored by the attacker. 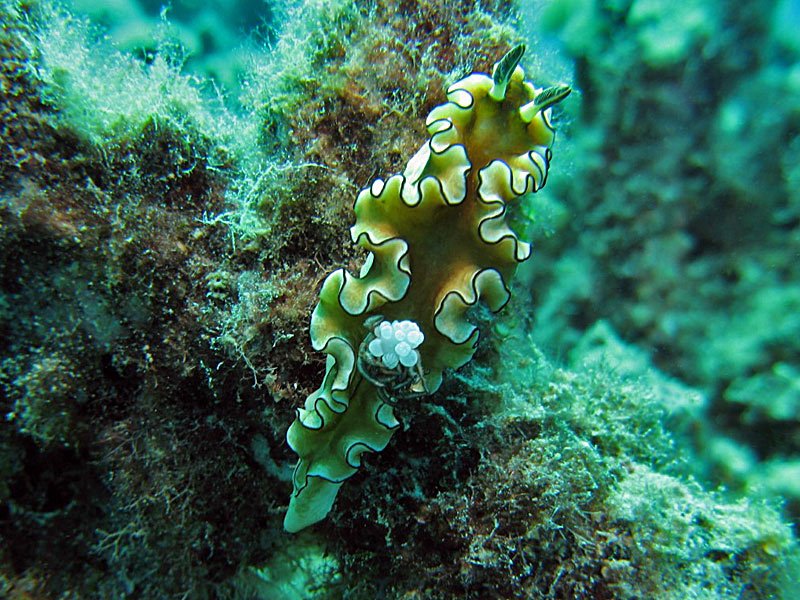 Most species of the Roboastra (Tyrannodoris) genus are voracious predators of fellow polycerids, notably species of Tambja and Nembrotha. They are fast moving (for sea slugs) and possess large well-developed oral tentacles for prey detection and an expansive oral hood for enveloping that prey. They have also been observed to consume a smaller partner following, or amazingly, even during copulation. It would seem the temptation of the close proximity at that time is just too great. 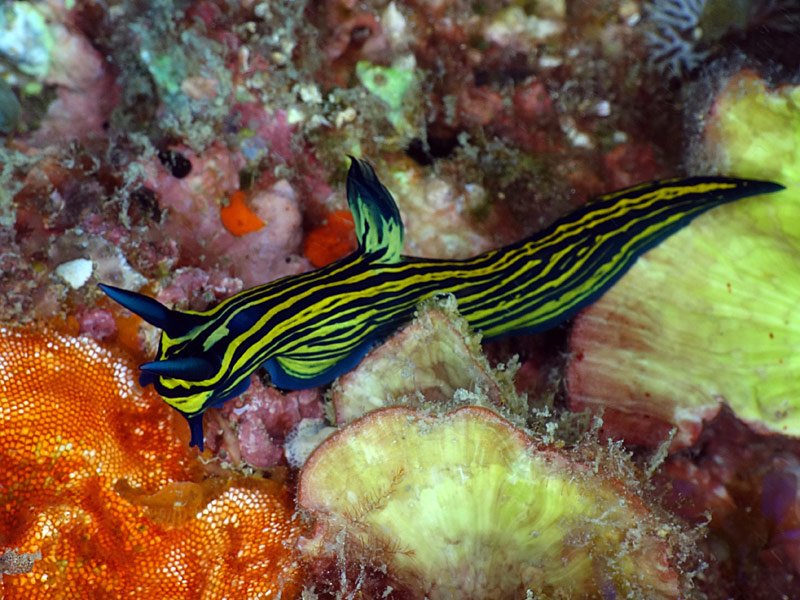 Roboastra (Tyrannodoris) luteolineata hunting for a meal. Prey, of the likes of a small Tambja tenuilineata, will disappear in a flash before your eyes as it is engulfed whole by this aggressive predator. 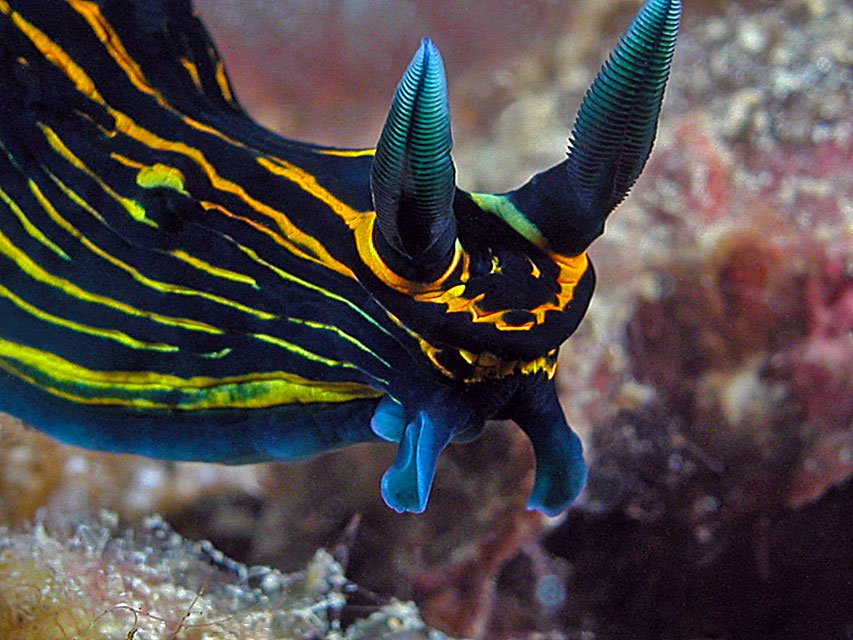 The business end of Roboastra (Tyrannodoris) luteolineata as it hunts for its prey. Note the large sensory organs: the rhinophores with many lamellae for at a distance chemo-sensing and the oversized oral tentacles for close quarters chemo-tactile sensing.

The side-gilled Pleurobranchaea have some members that are known to consume other sea slugs. These are generalist carnivores however and their consumption of the sea slugs is considered to be opportunistic behaviour rather than as dedicated slugivores.

There are some aeolids too that are known to eat other nudibranchs, opportunistically, such as the very aggressive Indo-Pacific Godiva quadricolor and the NW & NE Pacific Hermissenda crassicornis, amongst others. 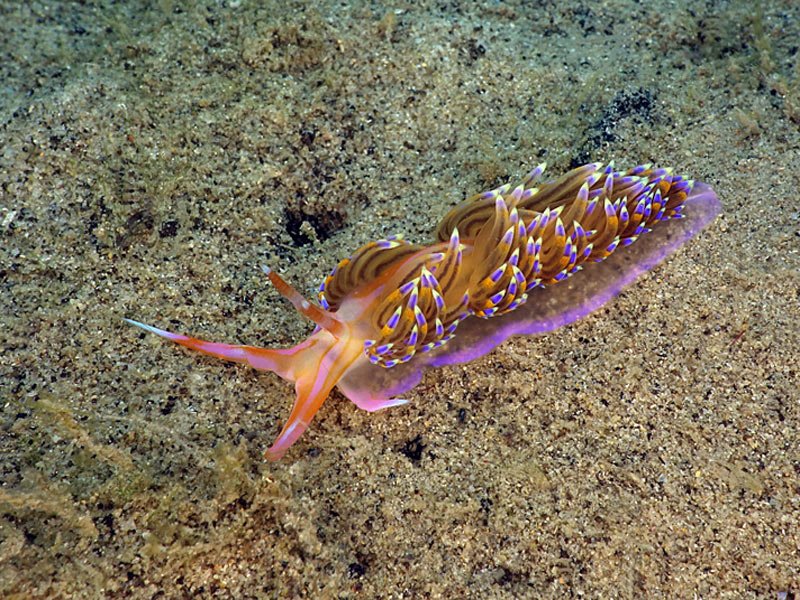 The voracious aeolid Godiva quadricolour. This species is happy to consume any “meat” in its path from hydroids to anemones to other aeolid or dendronotid nudibranchs. It is not discerning in its choice of prey.

Favourinus species of the Facelinidae Family whilst not slugivores per se and do not eat mature sea slugs do however concentrate upon their spawn, getting inside a coil of eggs and gradually devouring the lot. There are a couple of odd species within the sap-sucking Sacoglossa, belonging to the Limapontiidae Family, (the European Calliopaea bellula, Olea hensoni from Florida and Olea hansineensis from the northern Pacific) that are also known to be oophagous, notably on cephalaspidean (headshield slug) spawn. Technically, oophagous species are known as ovivores. 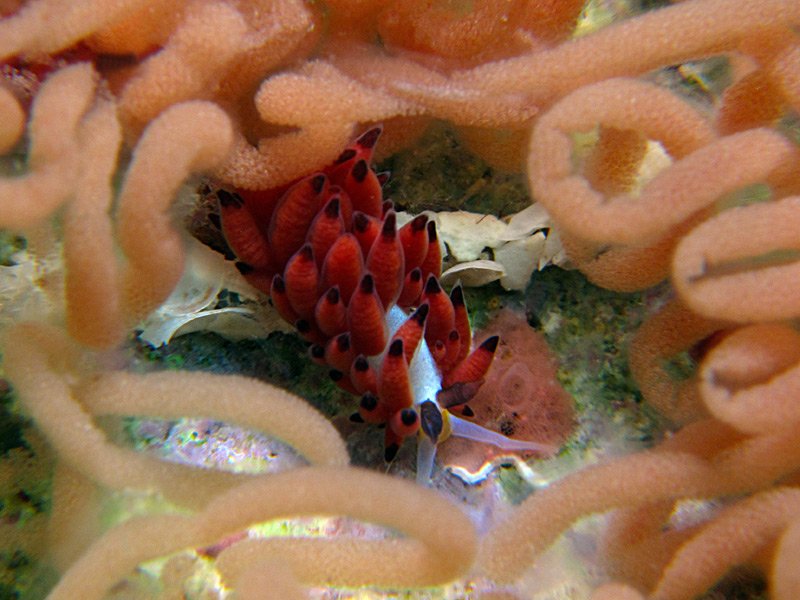 The ovivore aeolid Favorinus tsuruganus inside the convoluted egg spiral of a Marionia sp. on the underside of a coral slab. The digestive glands in the cerata are taking on and concentrating the colour of the eggs as they are consumed. 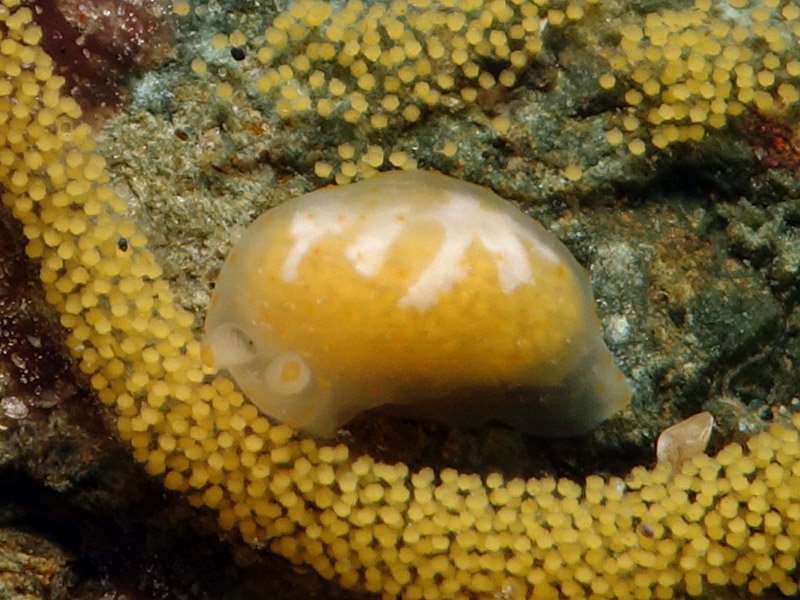 Some members of the Aglajidae Family have been recorded eating other sea slugs including Philinopsis speciosa eating the sea hare Stylocheilus striatus and various infaunal bubble shells. The Eastern Pacific Navanax inermis, the largest of the aglajids, is a well known predator of just about any sea slug it encounters, including juveniles of its own species. 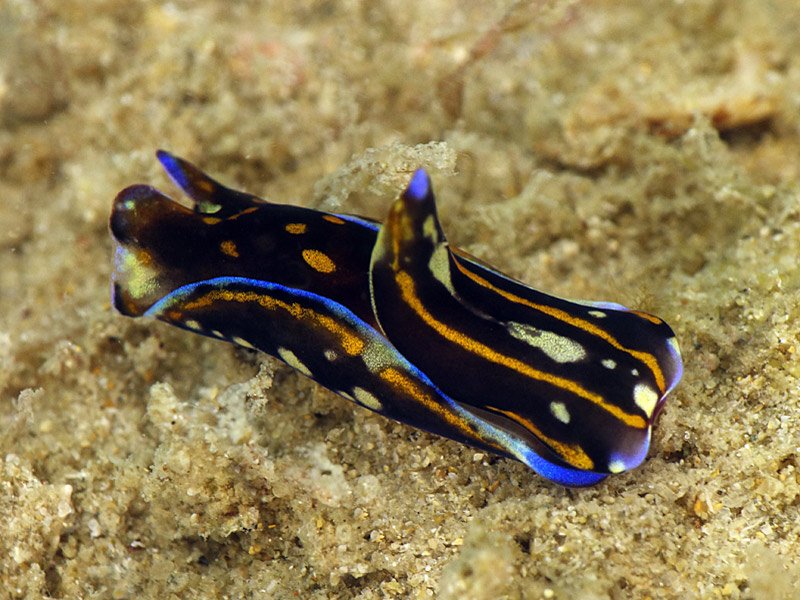 Philinopsis speciosa, just one of many aglajids that consume infaunal bubble-shell sea slugs as they hunt across and through the substrate.

All of these slugivores are fast moving, fast reacting, hunting sea slugs.

– This NudiNote has been modified from a previously published article in Dive Log Magazine’s – NudiNotes Column, Issue: #386 (February 2021): 17 by David A. Mullins.