SORTING OUT THE TRUE NUDIBRANCHS 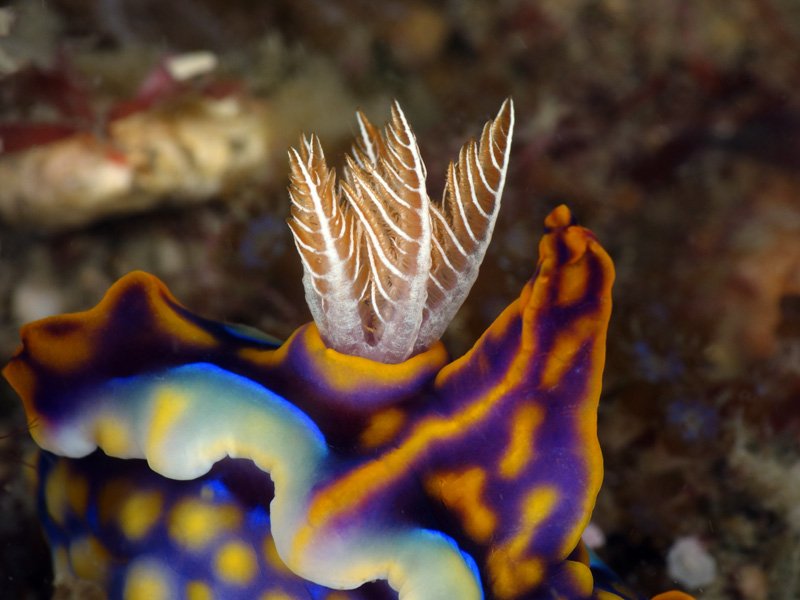 Sorting out the True Nudibranchs

The Nudibranchs are but one order, the Nudibranchia, in the informal group that we refer to under the umbrella of Sea Slugs although common and popular usage has seen the term Nudibranchs used incorrectly to refer to all the sea slugs in general.

This NudiNote is concerned just with the true Nudibranchs and understanding how they are grouped or classified. It is the human condition to want to understand the nature of things and one of the oldest methods has been to group like with like to make order out of seeming chaos, although this is being replaced more and more by phylogenetic methods based on common ancestor. Different taxonomists use different hierarchies. The simplified method used here on this website for the true Nudibranchs will be outlined below.

As adults no Nudibranch possesses a shell, this being lost as they hatch or metamorphose into the adult. There are two sub-orders (or as used here, two clades) of Nudibranchs:

The Doridoidea are often further divided into three major groups. Be aware that these are old, traditional, but still convenient groupings for practical purposes. Nobody believes that the members within in each are all phylogenetically related.

Phanerobranchia Grouping
These dorid nudibranchs are unable to retract their gills into a distinct pocket below the mantle. They have gills that are always visible or obvious (phanero). 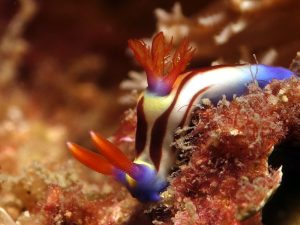 Above: The phanerobranch Nembrotha purpureolineata showing the non-retractile gill on the dorsum.

Cryptobranchia Grouping
These dorid nudibranchs are able to contract the gills entirely into a distinct pocket below the mantle surface – hidden (cryptic). 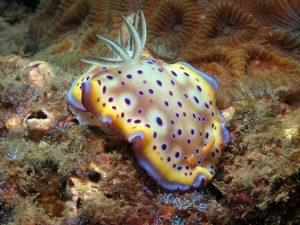 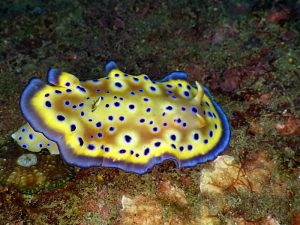 Above: Goniobranchus kuniei with its gill almost entirely retracted into the pocket below the mantle surface.

Porostomata Grouping
Although many may look similar to the cryptobranchs they are separated due to their lack of radula teeth, feeding instead by secreting digestive enzymes directly onto their food source and sucking up the resulting “soup”. Technically speaking, the porostomes are actually cryptobranchs as well, in having a pocket into which the gill can retract. Strange to relate, even the gill-less phyllidiids although having lost the dorsal gill still possess the pocket. 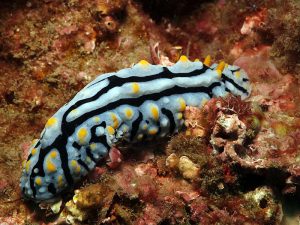 Above: The porostome Phyllidia varicosa lacks a radula being a suctorial feeder.

This is the other major clade of nudibranchs. Although the body forms vary greatly they are distinguished by possessing a branched digestive gland. None of this group have a typical gill circle on the dorsum. All either have secondary structures that perform gaseous exchange or lack them altogether. Also the anus is located on the right side of the body rather than on the dorsum.

The cladobranchs also are divided into three major groups and again they are not all phylogenetically related within those groups.

Arminia Grouping
Not a natural grouping of families but are grouped together on the basis of possessing an oral veil. Some have secondary respiratory leaflets in the hyponotum while others lack them completely. 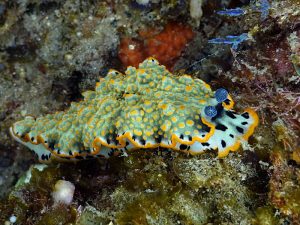 Dendronotina Grouping
Also not a natural grouping but all do possess raised rhinophoral sheaths and well-developed latero-dorsal appendages down each side of the body providing a large surface area for gaseous exchange. 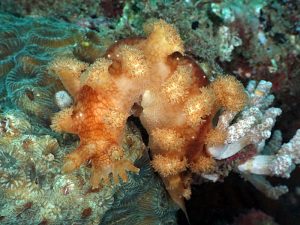 Above: A dendronotid, Marionia sp. showing the many-branched secondary respiratory processes arranged down the length of the body.

Aeolidina Grouping
The aeolids are elongate nudibranchs that do not have gills but carry many multifunctional cerata on their notum for respiration, digestion & defence. They lack rhinophoral sheaths. The paired oral tentacles are usually distinctive. 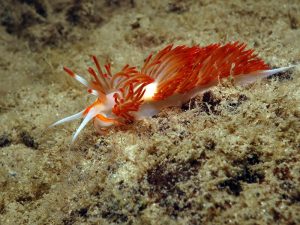 Above: The aeolid Sakuraeolis nungunoides. The multifunctional cerata are displayed on the dorsum. Note the lack of rhinophoral sheaths.

So once you start to to look at the gill or other secondary respiratory structures some sense can be made of identification. Combine that with the other observable features and you are well on the way to narrowing down the group to which a Nudibranch may belong. By reviewing the families that belong to each of true nudibranch groupings, via the navigation menu, a sense of what belongs where will be gained.