SPECIFICITY IN DIVERSITY – The diet of sea slugs 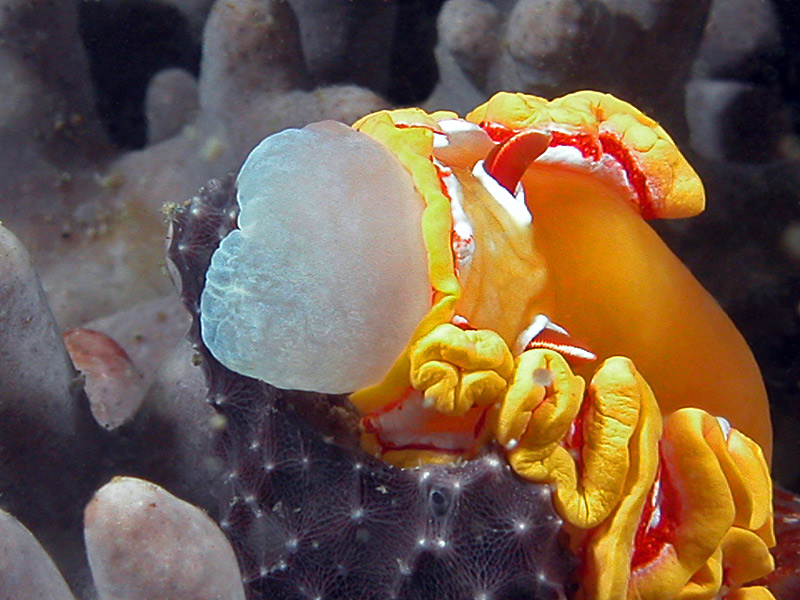 Across the entire group, the sea slugs have an extremely diverse source of food types, but conversely, each species usually has an extremely specific diet restricted in many cases to one or only few, usually closely related, prey species. A list of the animal types preyed upon reveals that all the major invertebrate phyla are exploited plus certain algae from the plant kingdom and even cyanobacteria. The greater majority of sea slugs are by far carnivorous rather than herbivorous.

The reduction or loss of the shell is thought to have permitted radiation into different food niches many of them not greatly exploited by other taxa. Food – the availability of it and the competition for it can drive evolutionary change as can ways to overcome the defences developed to try to prevent predation. This is diet niche exploitation. Diet has caused changes in colour and pattern. Even changes in anatomical shape and features have revolved around diet for functional reasons as well as mimicry and camouflage. Significant diet-related phenomena have also been developed by sea slugs and these include: concentrating of noxious compounds in mantle glands for defensive purposes, kleptoplasty whereby plastids from chloroplasts are sequestered from host algae and farmed for nutrition benefits, zooxanthellae are symbiotically hosted also for nutritional benefit, and nematocysts from cnidarian and siphonophore diets are stored for future defensive use. But all of those are subjects for future NudiNotes.

Most molluscs, including the sea slugs, have a radula – a toothed ribbon they use to scrape at, pierce or help grip their prey. The diversity of diet is reflected in the diversity of radula configuration long used as a species marker by taxonomists. Some though may swallow their prey whole by engulfing it or sucking it up whilst others without a radula secrete digestive enzymes externally directly on to their prey and then suck up the semi-digested “soup”.

What follows is a list of sea slug food: 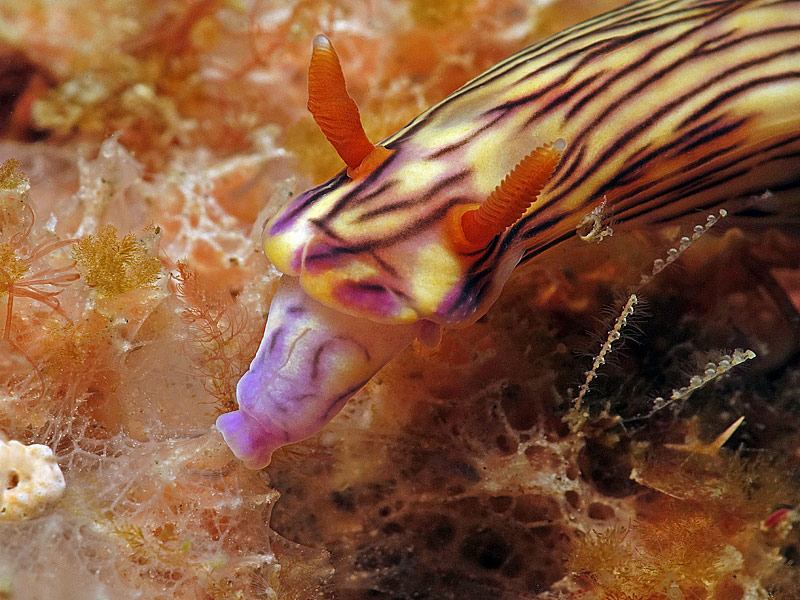 The cryptobranch dorid Hypselodoris zephyr with its buccal tube extended, feeding on a Dysidea species of sponge. Sponges contain highly toxic antifeedant compounds that some nudibranchs have evolved means to tolerate and separate from the ingested food and concentrate in specialised mantle glands for their own defence. 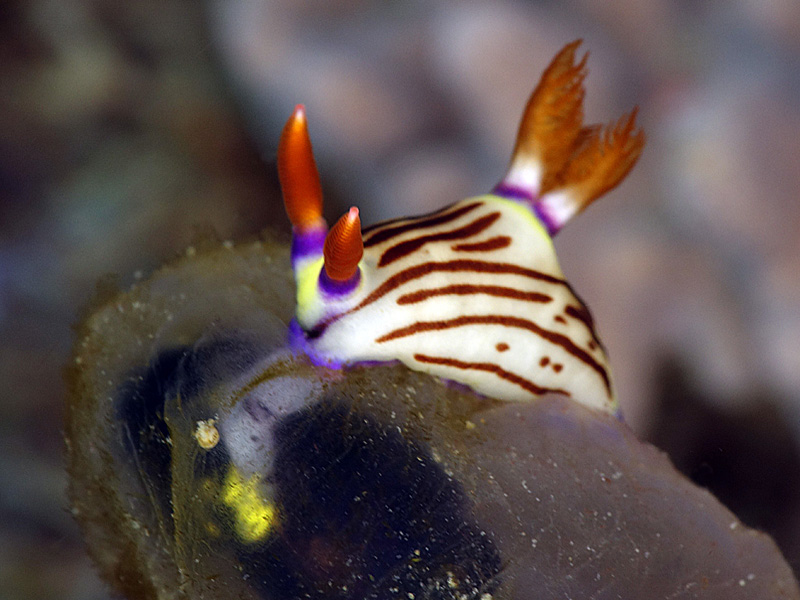 The phanerobranch dorid Nembrotha lineolata feeding on an ascidian. It has pierced the outer tunic of the ascidian and the inserted oral tube can be seen feeding on the internal viscera. 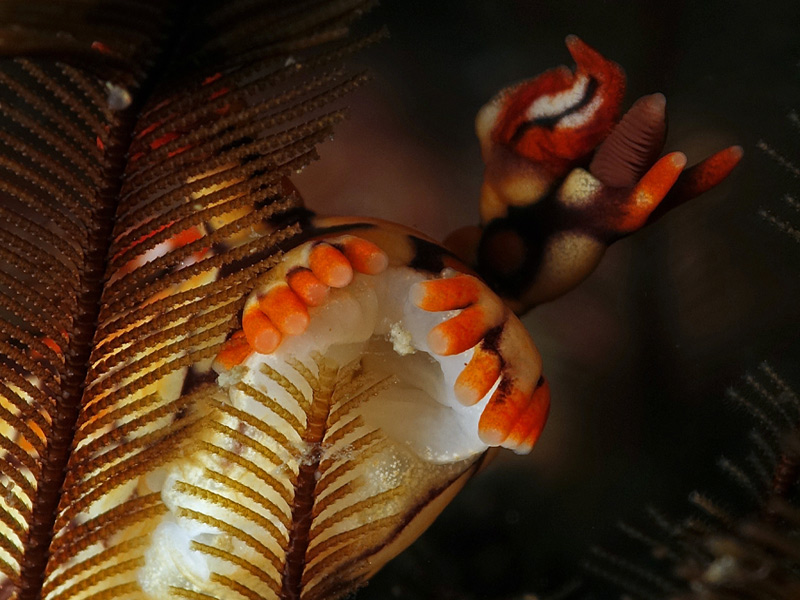 The dendronotinid Bornella anguilla stripping polyps from an Aglaophenia species of hydroid. The broad oral flap on each side of the mouth carries 5 to 6 finger-like sensory papillae that help guide the nudibranch to its prey in the final approach. 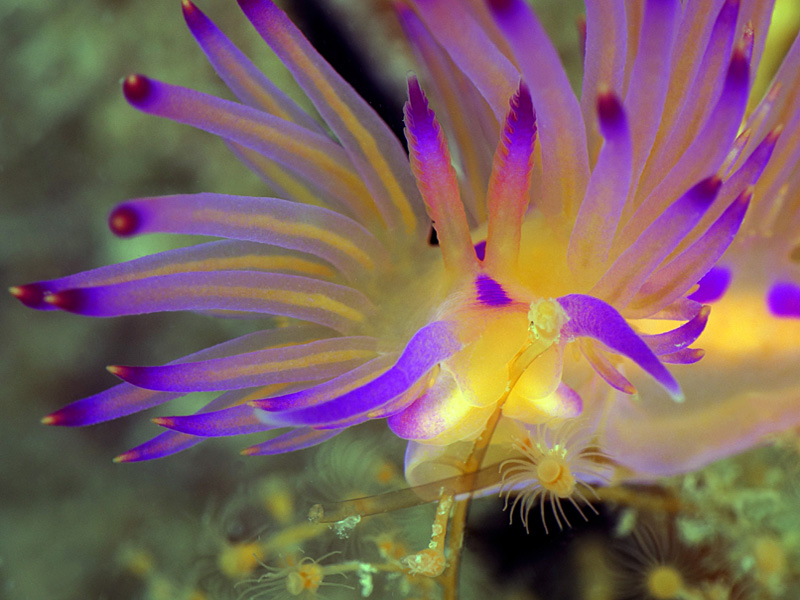 The aeolid Flabellina lotos (or Coryphellina lotos depending on your source) moving up the stem of a Eudendrium species of hydroid and devouring the polyps along the way. Nematocysts from the hydroid are stored undischarged in the cnidosacs at the tips of its cerata for defensive purposes. 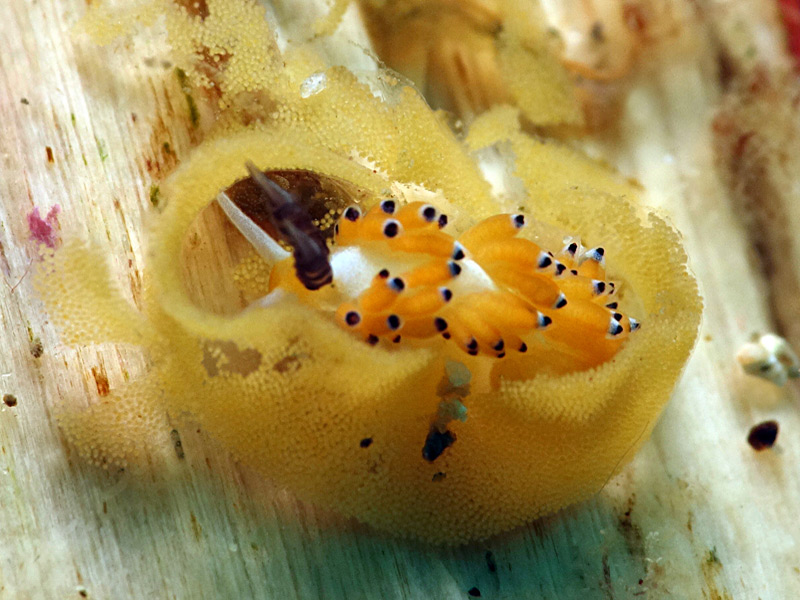 The aeolid Favorinus tsuruganus inside a dorid nudibranch spawn spiral eating the egg capsules. The cerata take on the colour of the eggs. 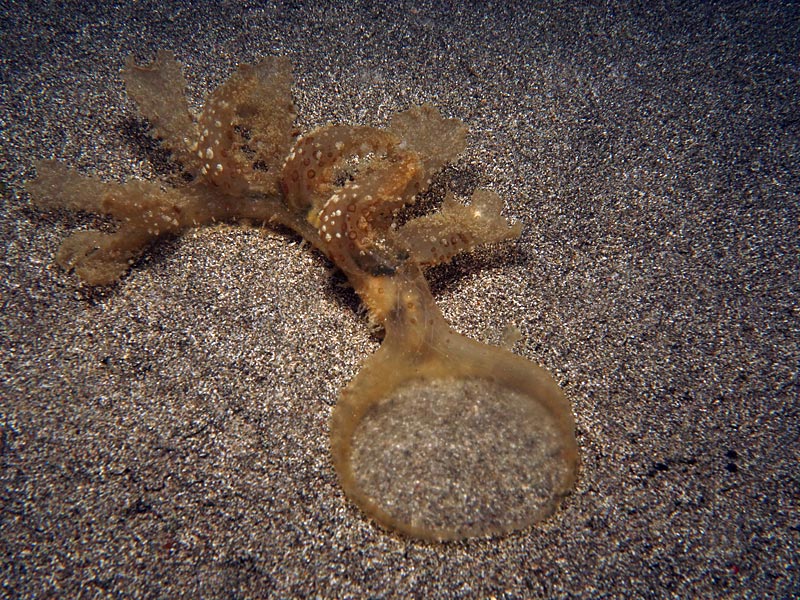 Melibe viridis casting its specialised well-developed oral hood over the substrate, like a net, to capture small crustaceans. 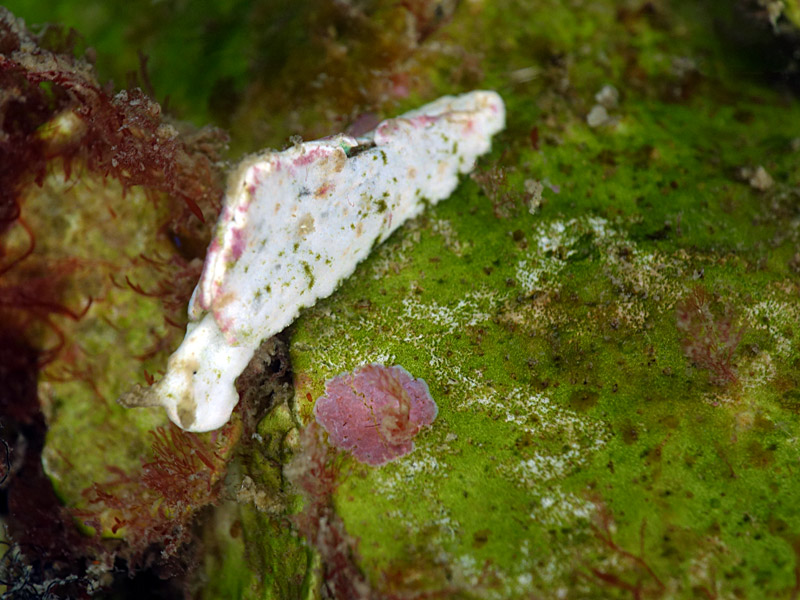 The sap-sucking sacoglossan Elysia pusilla (or Elysia sp.) shown here disturbed and moving off its host the algae Halimeda sp. Its feeding track is obvious, the white trail where the green protoplasm has been sucked out of the algal cells. This specimen does not display the usual light green colour of the sequestered chloroplasts in the external face of the parapodia, with just small spots being evident. However the pink colouration along the parapodial edges mimics the coralline algae growing on the Halimeda.

Look for future NudiNotes that will deal with each type of food and the sea slugs that prey upon them as well as the dietary phenomena that have evolved.

– This NudiNote has been modified from a previously published article in Dive Log Magazine’s – NudiNotes Column, Issue: #383 (August 2020): 19 by David A. Mullins.