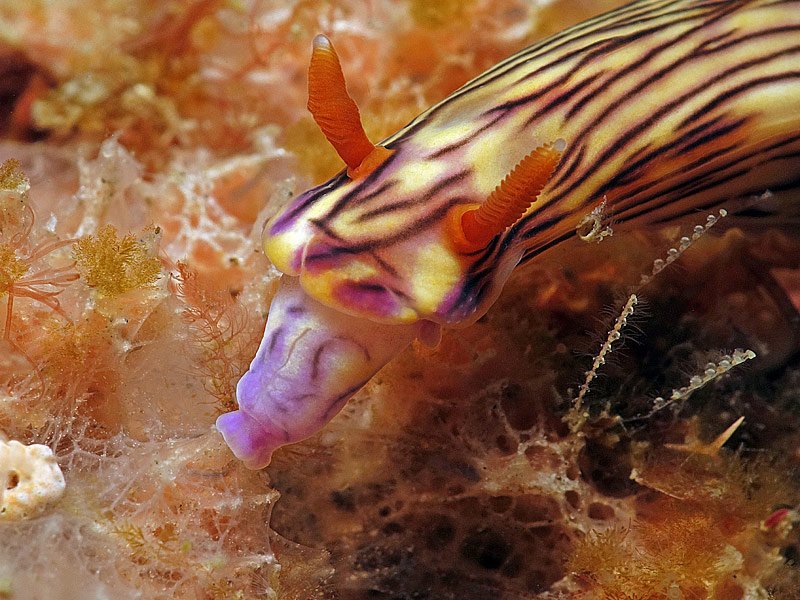 Sponges (Phylum Porifera) are one of simplest and oldest of multicellular animals. They have the least complex body form of the multicellular animals. Only a few specialist predators are known to be exclusively spongivores, that is, to have a sponge diet and these are disproportionally represented in the sea slugs. Others include the Hawksbill Turtle and certain fishes including angelfish, leatherjackets and pufferfish and some other gastropods notably the prosobranchs of the Triphoridae and Cerithiopsidae, plus a few specialised crustaceans and echinoderms. It would be wrong to assume that just because sponges possess a simple body form and are sessile animals they are an easy meal. In order to consume sponges these animals, including the sea slugs, have had to evolve counter-measures to the predator deterrents the sponges themselves have evolved over the millions of years (at least 750 million) of their existence. 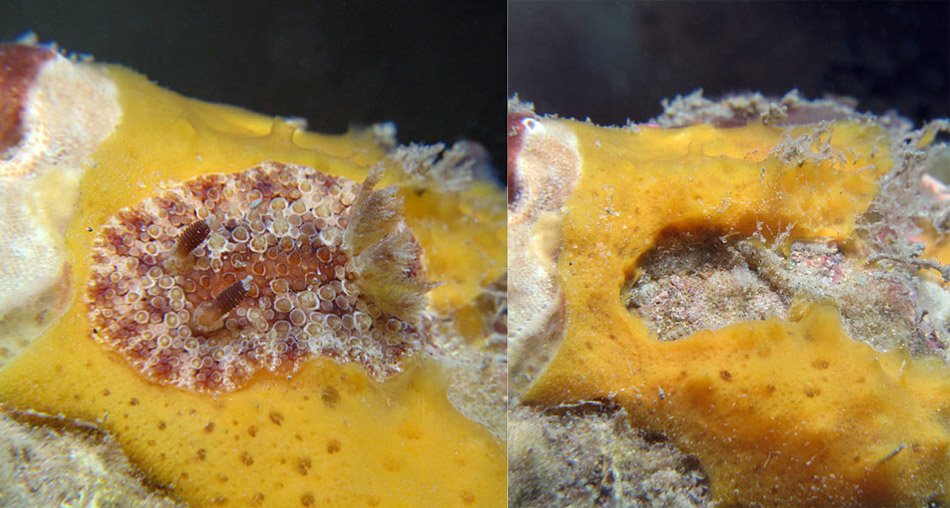 Carminodoris nodulosa, a cryptobranch dorid, feeding on an encrusting sponge. When temporarily removed the feeding scar beneath is visible. Spongivores have developed means to overcome the sponge defences including the toxic anti-feedants in their flesh.

In the Nudibranchia order it is within the dorids that we find the spongivores. All of the cryptobranch dorids (retractable gill) and porostome dorids (radula-less) feed upon sponges as do some of the phanerobranch dorids (non-retractable gill) including the Hexabranchidae and Aegiridae. The few species representing the Umbraculoidea order (umbrella sea slugs), some of the Gastropteridae family of the Cephalaspidea order (headshield sea slugs) and some of the Pleurobranchoidea order (side-gilled sea slugs) prey upon sponges too. Some members of the Goniodorididae family, such as species of Trapania, were once thought to be spongivorous however it is now known that they consume the tiny colonial entoprocts (kamptozoans), that grow in association with the sponge, rather than the tissue of the sponge itself. 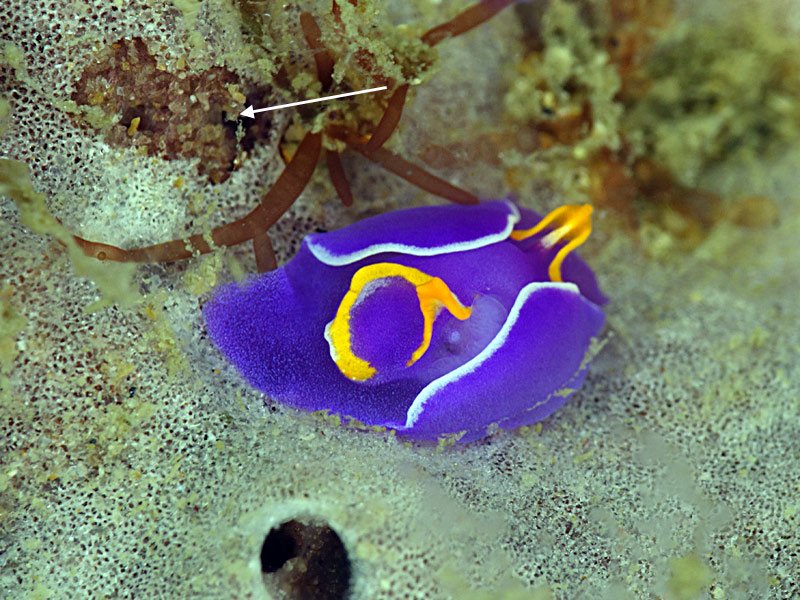 Sagaminopteron ornatum, a cephalaspidean of the Gastropteridae family, grazing across an encrusting sponge. A feeding scar is obvious above and behind it (arrowed). 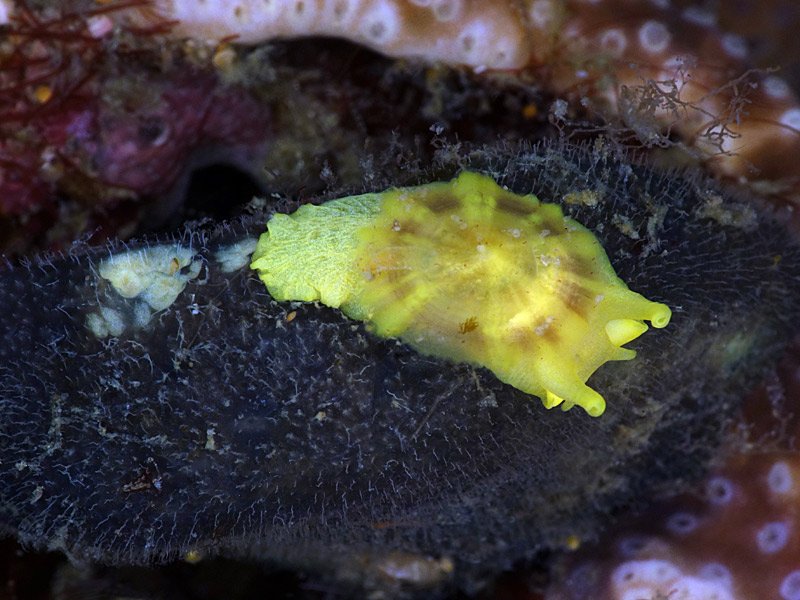 Tylodina corticalis, an umbrella-shell sea slug feeding upon a Pseudoceratina sp. sponge. Notice the yellow feeding scars it has left behind in its track. Eventually there may be nothing left of the sponge apart from the inner ”skeleton”, all the flesh having been devoured and then the sea slug’s spawn deposited upon the remains. 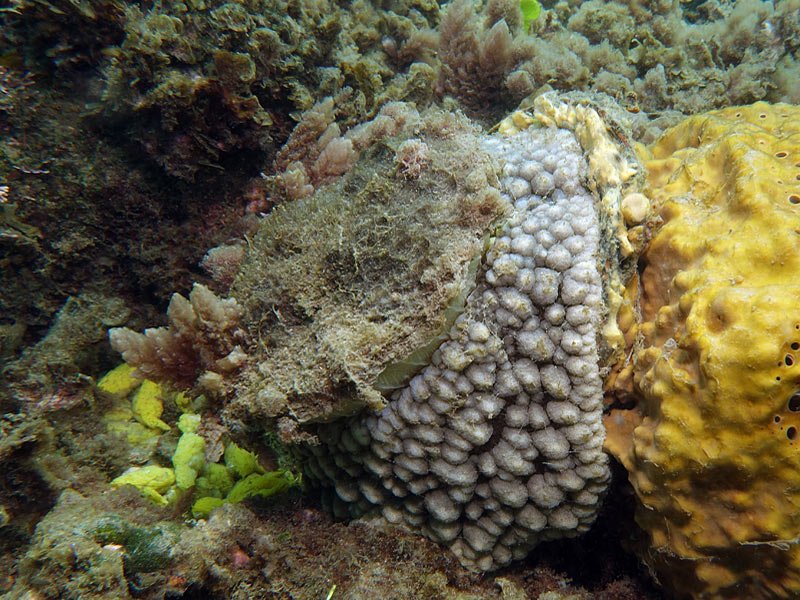 The Umbraculum umbraculum umbrella sea slug feeding upon a large sponge, possibly Tethya sp. Notice the pile of bright yellow faecal pellets deposited behind it. These are essentially neatly bundled packets of the sponge’s spicules sorted in the sea slug’s digestive system and wrapped in a mucus cocoon to minimise damage as it is passed through the gut. 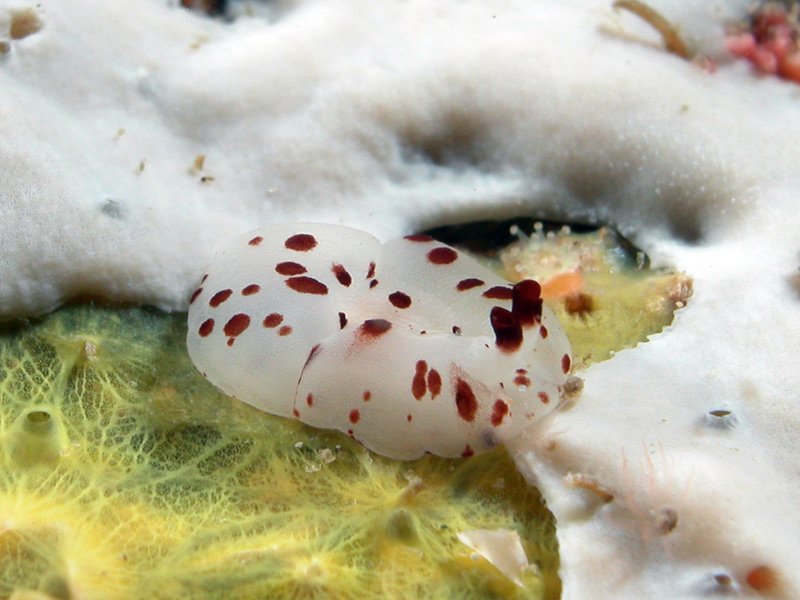 The side-gilled slug Berthella martensi feeding by nibbling at the edges on what looks to be a lifetime supply of sponge food. A number of the Pleurobranchidae sea slugs are spongivores. 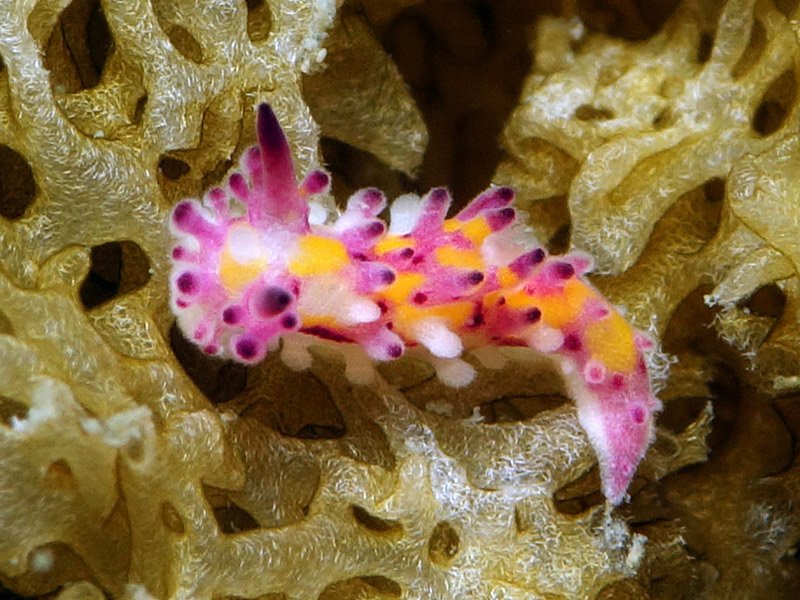 The phanerobranch Aegires villosus feeding on Clathrina sp. The spicules in the sponge’s tissue are clearly evident. 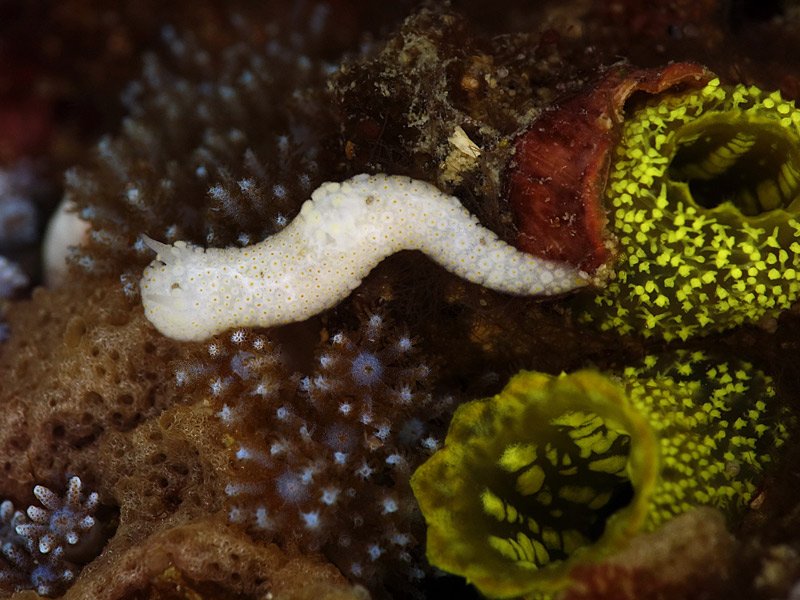 Aegires flores, a phanerobranch dorid, having traversed across ascidians and octocorals it has reached and is feeding upon its preferred sponge prey. 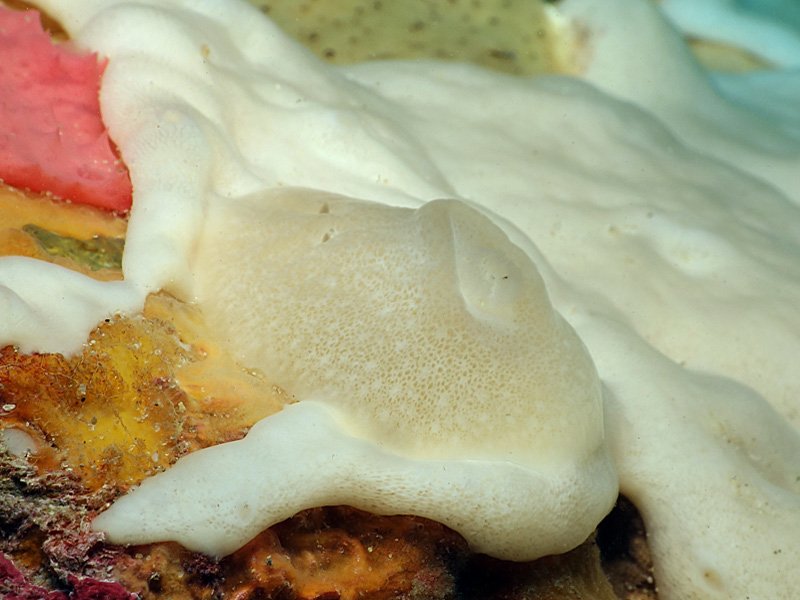 Hallaxa translucens, a cryptobranch of the Actinocyclidae family, upon its sponge prey, found on the underside of a coral slab. The colour and texture of the slug’s mantle matches the texture of the sponge’s surface and the raised gill pocket mimics somewhat the oscula of the sponge. This is an example of crypsis, the nudibranch mimicking the sponge. 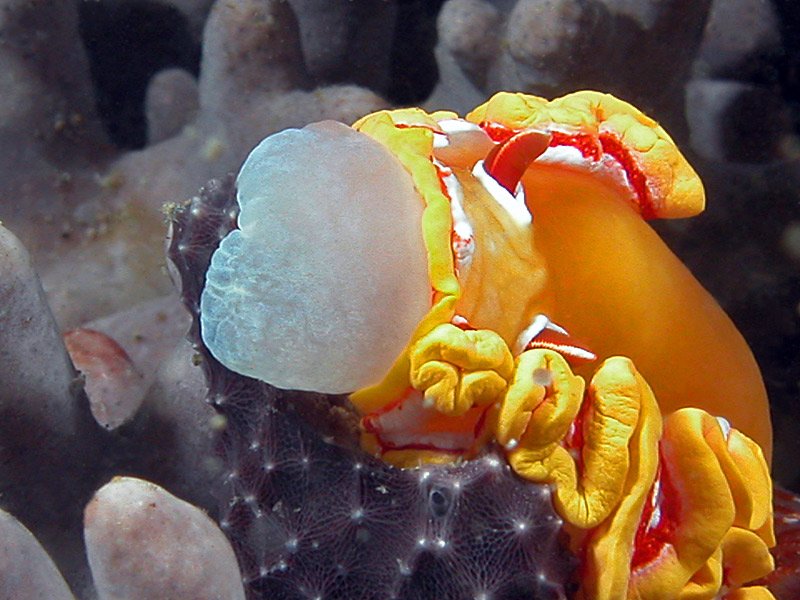 Ardeadoris rubroannulata attacking its sponge prey. The buccal mass is extruded allowing the radula full access to the sponge tissue for rasping off pieces. 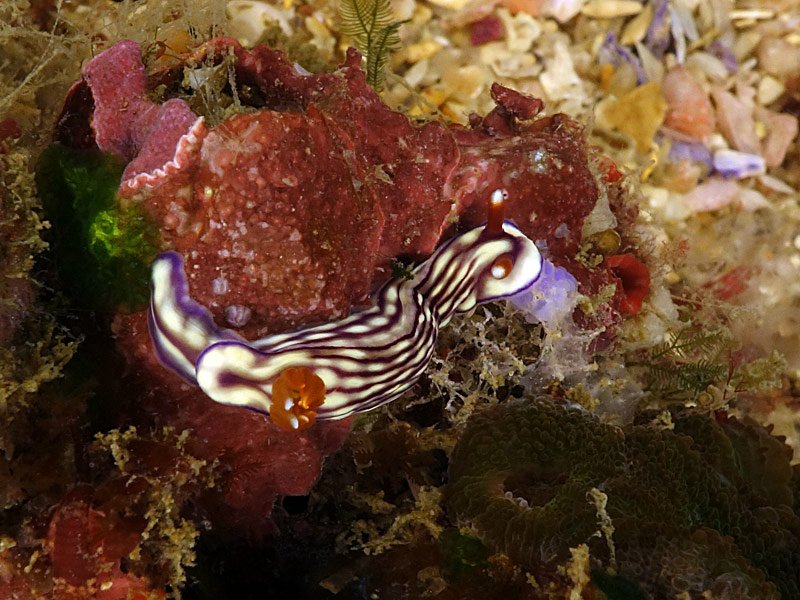 Here Hypselodoris whitei can be seen removing the sponge tissue – the translucent greyish flesh in front of it – and leaving behind the indigestible sponge “skeleton”.

There are four main modes by which sponges attempt to deter predators:

– The bulk of their bodies is relatively low in nutritional value.

– Their flesh not only contains distasteful chemicals but others of the highest toxicity may be present as well. Sponges may be simple marine life forms however the complex chemicals they collect, recycle, possibly synthesise or accumulate from hosted bacteria, cyanobacteria and symbionts are anything but. Some sponges are so toxic they should not be handled without protection.

– Some sponges are known to display aposematic colouration or shape to warn potential predators of their toxicity or unpalatable nature.

How do sea slugs prevail over the above deterrents?

– Production of copious amounts of mucus facilitates the transit of ingested spicules through the gut thus preventing abrasion injury. Some though, just avoid the spicule bearing sponge species altogether.

– Sea slugs have a low metabolic rate and are relatively passive compared to many other animals that hunt; consequently the low nutritional value of sponge flesh is not a drawback, especially when the volume they consume is also considered.

– The sponge prey of sea slugs in most instances is often limited to a single species or a small number of closely related species. By this selective feeding and concentrating on a single, or a group of related species they have managed to evolve digestive chemical pathways to deal with the particular anti-feedant toxic chemicals of those sponge/s. These chemicals, called secondary metabolites, (not essential for normal growth or development of the sponge) are then stored and concentrated within special glands that then become a defensive attribute for the sea slug itself. It is thought that this attribute most probably arose though several steps originating as a process of isolating then concentrating the toxins by partitioning them in glands, to prevent “autotoxicity”, and for eventual discharge. Interestingly, studies have shown that some nudibranchs are able to selectively sequester and accumulate a specific compound in their defensive glands even though many others are present in their viscera. The location of these storage glands is also significant in that in many instances they are positioned adjacent to vital structures such as the gills or around the mantle margin to be first encountered by a predator’s attack. Consequently, these sitings could lead us to reasonably assume that the glands are defensive in nature by acting as feeding inhibitors.

– Sea slugs possess simple eye spots that detect the presence of light and its intensity only. They cannot detect shapes or colours so the aposematic warning signals presented by a sponge have no effect upon the sea slug. The sea slug instead, uses chemical cues given off by the sponge that they recognise, detected at a distance by their rhinophores and on the spot, for placement of the radula, by their oral tentacles.

The types of sea slugs mentioned in the previous sentence rasp off pieces of sponge tissue using their radula, the toothed ribbon in their buccal mass that is pushed out against the sponge. The porostome dorids, such as the phyllidids and dendrodorids however, are suctorial feeders, having soft mouth parts, lacking a radula, and secrete enzymes on to the sponge tissue to partially digest it externally before sucking it up using their muscular buccal pump. 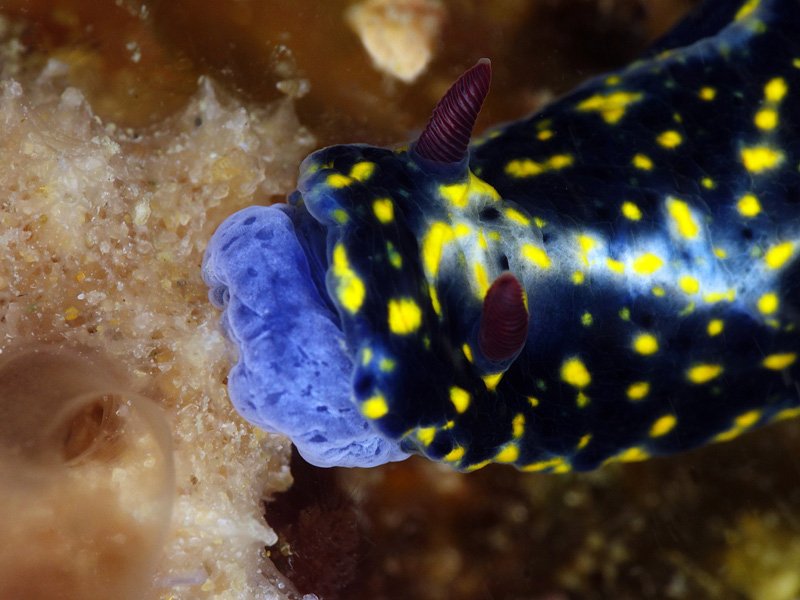 The chromodorid Hypselodoris obscura pushing out its blue buccal mass to press the radula against and rasp at the sponge prey.

Above: A pair of Hypselodoris obscura nudibranchs attack a silt-covered sponge, rasping off pieces for consumption. 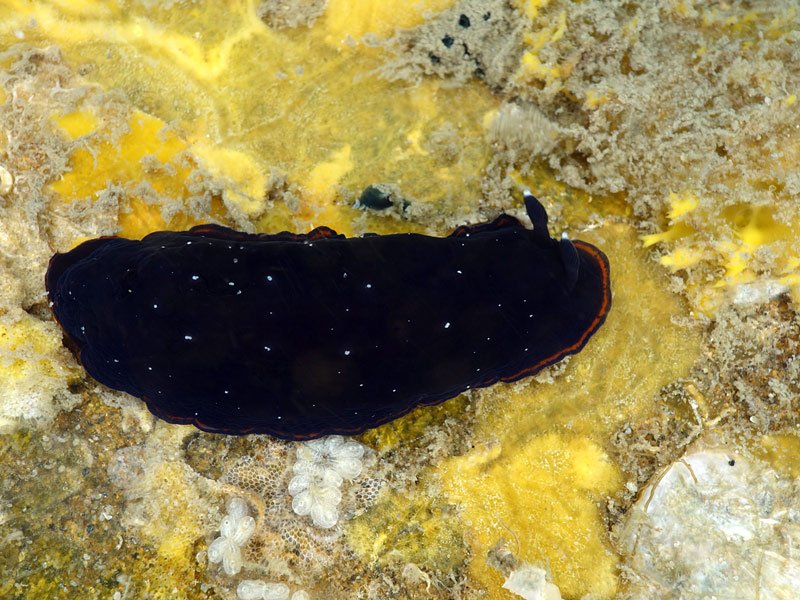 The suctorial feeding (porostome) nudibranch Dendrodoris nigra secretes enzymes upon the sponge and sucks up the partially broken down tissue. 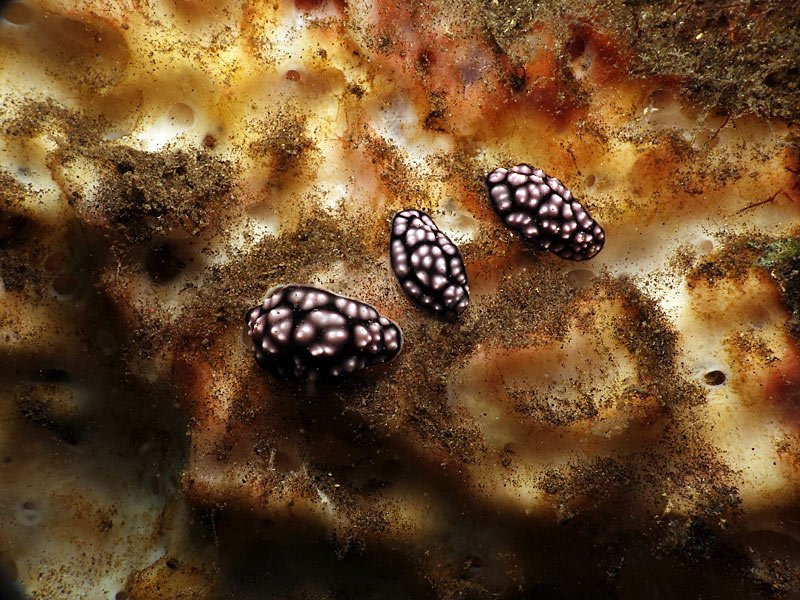 Phyllidiids are porostome (radula-less) nudibranchs as well, feeding by the suctorial method. Here they are making the most of a large area of sponge. Their prey is most often unobservable. The phyllidiids are very toxic nudibranchs known to kill all other inhabitants of an aquarium if placed therein.

Often the sponge colony may not be readily evident being either quite small, partially overgrown by other sessile organisms or covered in silt. In most instances the actual feeding process is obscured from view by the head and or oral veil of the sea slug that lie over the prey as it is being eaten.

Sometimes several specimens of a sea slug species may be found upon a sponge all feeding in what could be described as a sea slug “feeding frenzy”. Different but related species can also be seen together on the one sponge and in rare situations even unrelated species, if they have the same diet, may feed together. 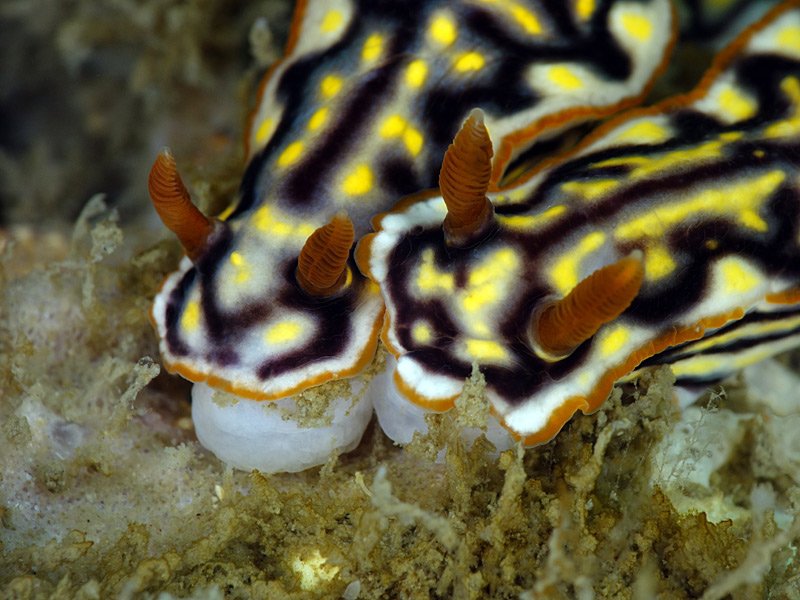 A pair of Hypselodoris jacksoni feeding together on a small and partially hidden sponge colony. 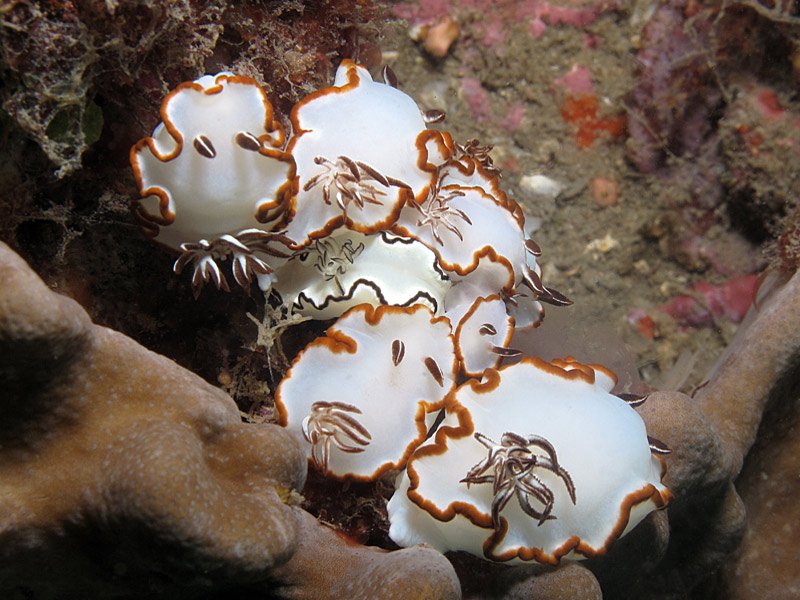 An example of several nudibranchs (all chromodorids) all feeding upon the one sponge colony – seven Glossodoris rufomarginata are feeding together with a different species – a single Doriprismatica atromarginata. 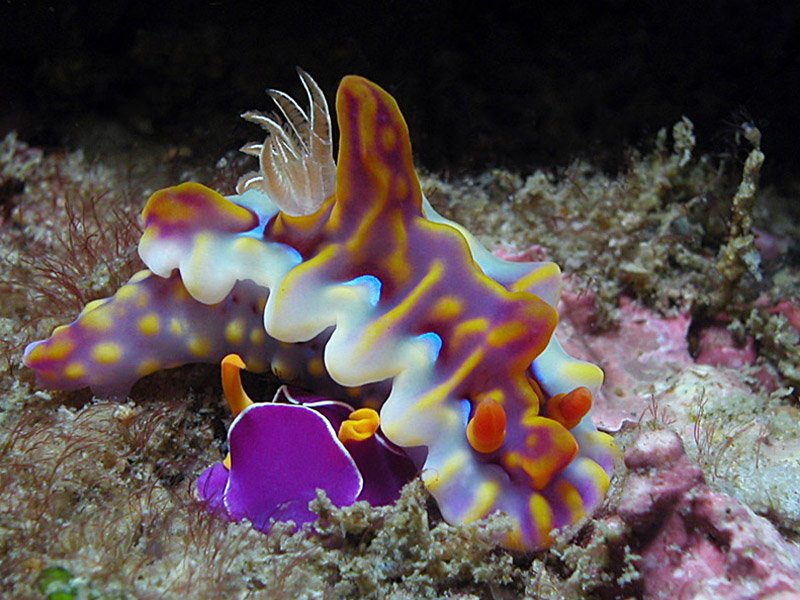 Here is an example of two vastly different sea slugs Miamira magnifica and Sagaminopteron ornatum, from different taxonomic orders, feeding upon the same sponge. I have recorded these two species feeding together several times. Miamira magnifica is a chromodorid nudibranch that displays flamboyant colouration. Note the same colours exhibited by both species, just arranged differently. This aposematic colouration (to warn predators of a toxic nature) has come about in conjunction with the ability to sequester highly toxic chemicals from their sponge prey.

There appears to be a trend among most sea slug taxa where the more basal species are cryptic in colouration and the most highly derived are more colourful. It has been postulated that as more powerful (toxic) secondary metabolites gradually became more accessible, that is, able to be processed by the sea slug, the re-use of them in self-defence permitted some sea slugs such as the chromodorids to change (evolve) from cryptic colouration to the colourful aposematic (warning) colouration we see in that group today. Conspicuousness, even as a warning, certainly attracts attention and can be a risky ploy so only those with the best protection (high toxicity/unpalatability) can afford to be so. Toxicity therefore is thought to be related to the conspicuousness of the nudibranch. Another factor to consider is chemical aposematism (olfactory aposematism). Recent research has suggested that the stored toxic chemicals may give off a chemical warning signal that predators are able to sense and recognise. The low solubility of these chemicals in the sea water serves to prevent their dilution and increases localised effectiveness. 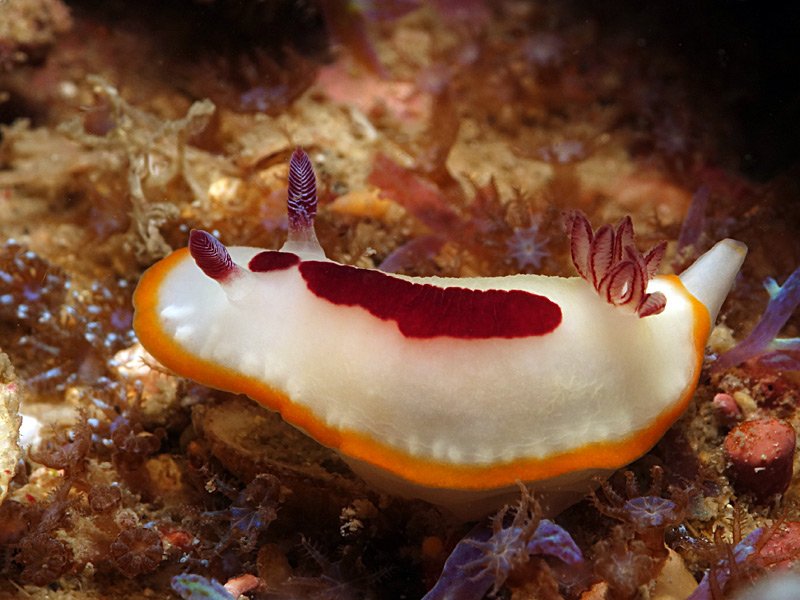 The defensive mantle glands of Goniobranchus splendidus, situated close to the mantle margin, are quite obvious. This species is conspicuous on the substrate exhibiting aposematic colouration in conjunction with several other similarly patterned and coloured species.

On the other hand there are some cryptobranch dorids, for example among the Discodorididae, that are not only cryptic by virtue of their drab colouration but also mimic extremely well the very sponges upon which they prey by colour, form and texture. These sponge mimics not only resemble their prey, their spawn too is similarly coloured and laid flat with the widest section attached to the substrate thereby reducing visibility. 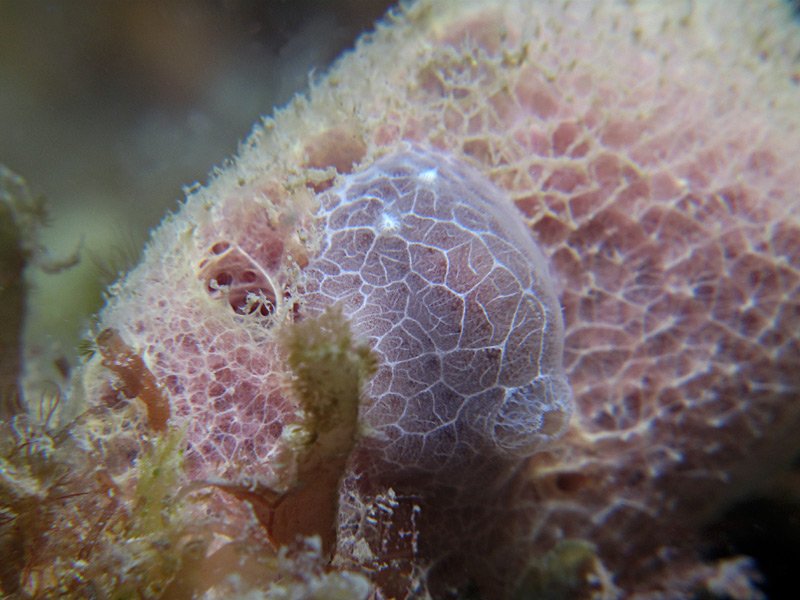 A cryptobranch of the Discodorididae family – Jorunna sp. 04 – the mantle matches the texture of its host sponge. The tightly grouped gills mimic the sponge’s oscula and the small rhinophores bear a resemblance to the junctions of the sponge ridges. 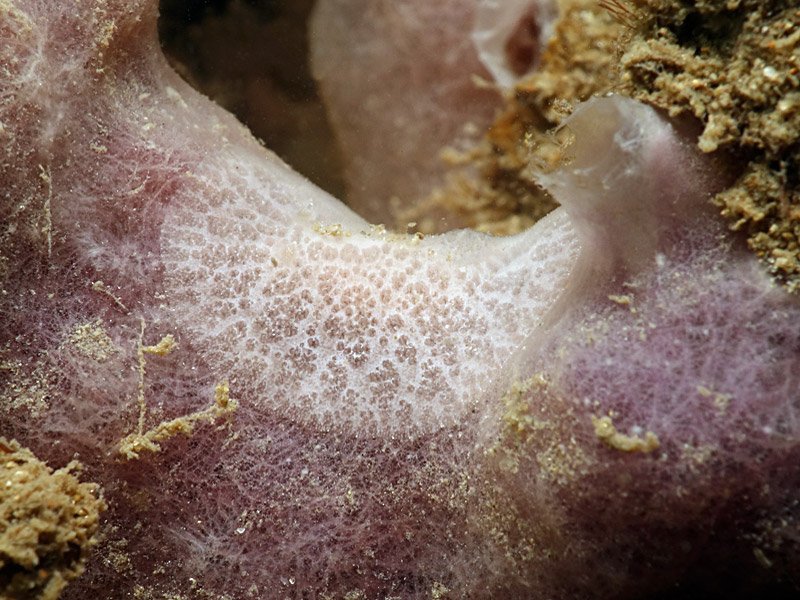 Another cryptic Jorunna – Jorunna sp. 02. This species flattens itself out on the sponge. At times its presence can only be detected by the existence of its spiral egg mass nearby.

There are two forces at work here. These sea slugs (the cryptobranchs and porostomes in particular), as specialised predators, are engaged in a double ended evolutionary race: on the one hand, that of staying ahead of the defensive strategies of their toxic sponge prey and, on the other, applying the results of that self-defence attribute towards their own protection thereby also staying ahead of their predators. This combination serves to create intense selection pressures that have possibly been major contributors to the high level of speciation within this group.

– Gosliner, T. M. & Valdes, A. (2002). Sponging off of Porifera: New Species of Cryptic Dorid Nudibranchs (Mollusca, Nudibranchia) from the Tropical Indo-Pacific. Proceedings of the California Academy of Sciences Vol. 53, No. 5, pp. 51-61.

– This NudiNote has been modified from a previously published article in Dive Log Australasia Magazine – NudiNotes Column, Issue: #387 (April 2021): pp. 34-35 by David A. Mullins.