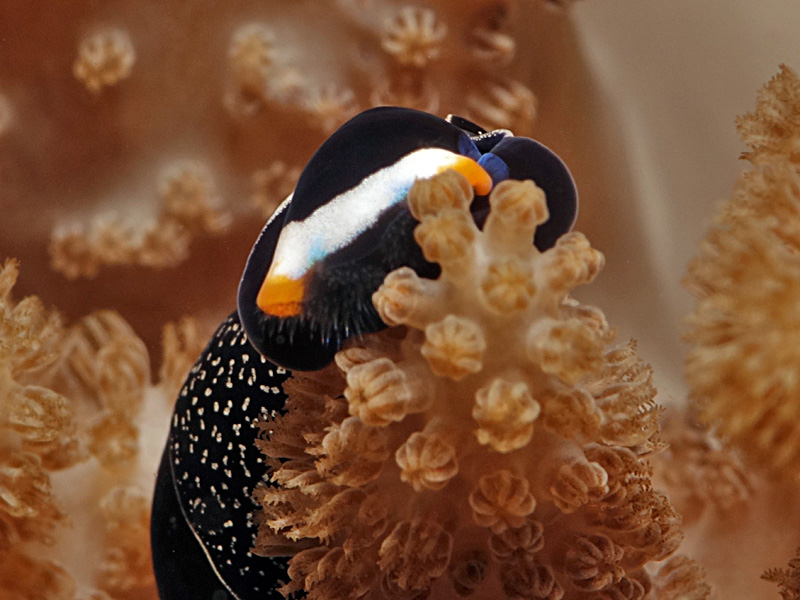 The Aglajidae are a carnivorous group of headshield sea slugs that actively hunt their prey. They are mostly fast moving in order to capture other sea slugs and polychaete worms. They are well-adapted for the task with clusters of sensory bristles located on the front of their broad headshield, on mounds both sides of the mouth (see main image above), believed to enable them to follow the track of their prey, the mucus trail of other sea slugs for example. The chemical cues in the surrounding water column are sampled by their Hancock’s Organs from water directed into a lateral groove between the headshield and the parapodia. The shell is much reduced and internal, but being exposed somewhat in the Noalda. The headshield of course assists with burrowing into the substrate for hunting and capturing detected prey. All aglajids, except for the Odontoglaja, lack a radula and feed either by sucking in the whole prey in an instant or enveloping it with their everted buccal bulb.

Mariaglaja inornata (formerly Chelidonura inornata) is a very streamlined aglajid and I have taken many hundreds of images of solitary specimens hunting or pairs or larger groups mating in all sorts of habitats. This species has a short though very muscular buccal bulb used for ingesting its prey by sucking it up, all too quickly to actually observe. During a dive at Currimundi Reef, Sunshine Coast, Queensland, Australia, I happened upon a group of this species that was methodically moving through the branches and stems of a soft coral searching for prey. I could see little brown spots scattered upon the surface of the soft coral and closer examination revealed small flatworms possibly the acoel Warminoa sp. The following sequence of images illustrates without doubt a dietary component of Mariaglaja inornata. 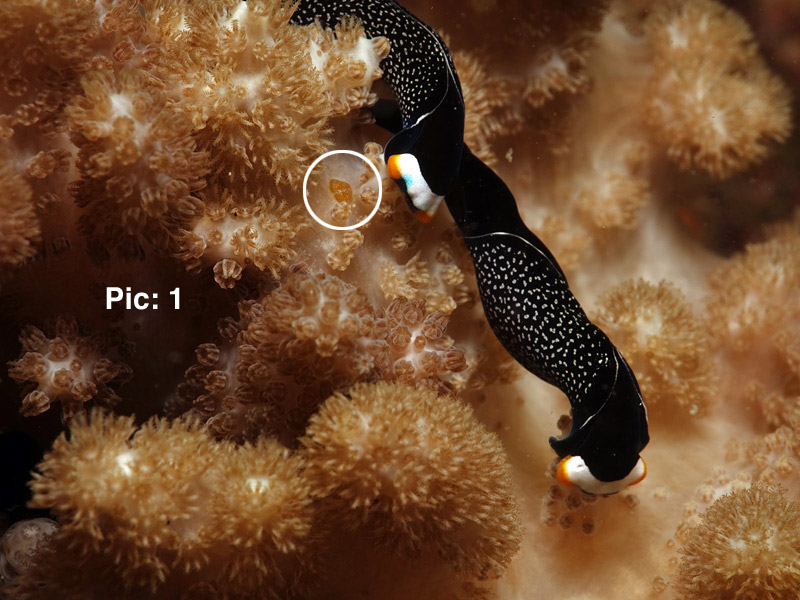 Pic 1: Two Mariaglaja inornata trailing as they search through the branches of a soft coral. The rear one seems to be veering towards a acoel flatworm (ringed) – possibly Warminoa sp. 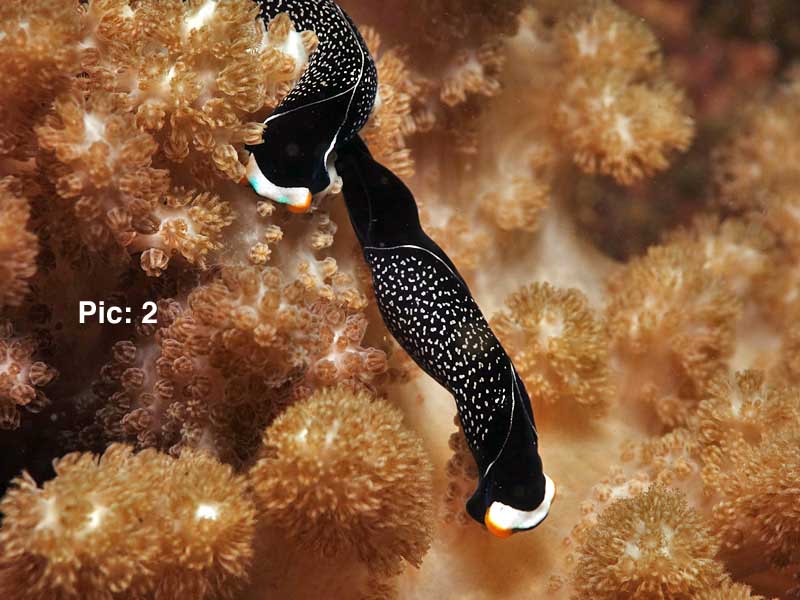 Pic 2: Its head is now covering the area where the acoel flatworm was situated. 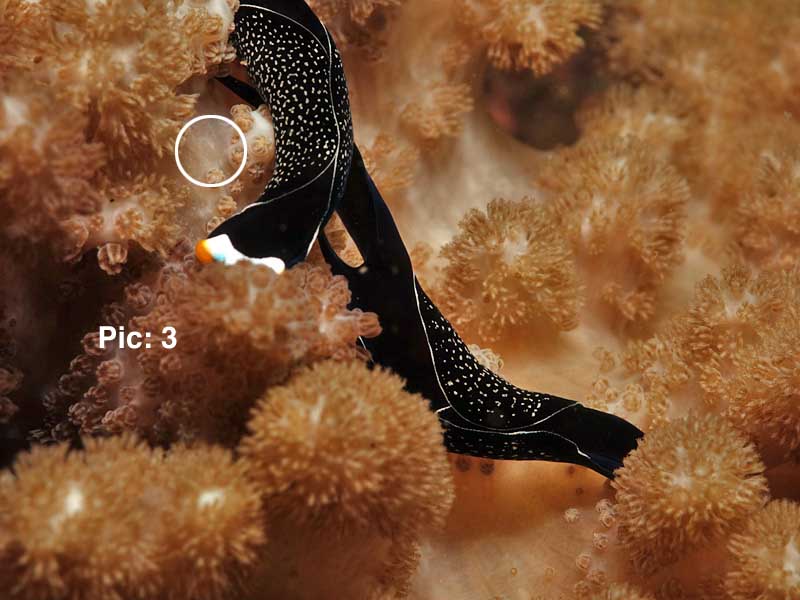 Pic 3: Only a bare patch now remains where the flatworm was previously situated (ringed). 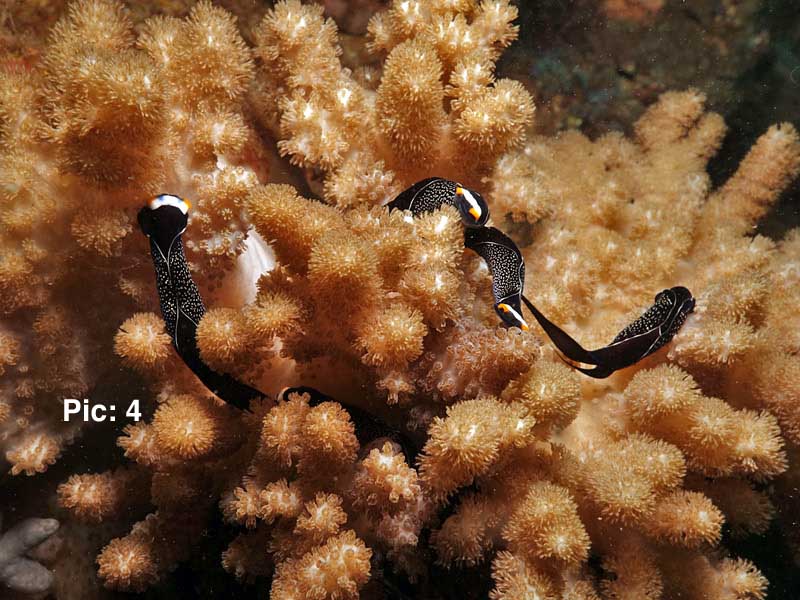 Pic 4: A wider angle view showing four of the six that were present searching through the soft coral for more prey. These sea slugs belied the name of slug. They were doing a fast though thorough job of checking every nook and cranny for their prey.

– Rudman, W. B. (1978) A new species and genus of the Aglajidae and the evolution of the philinacean opisthobranch molluscs. Zoological Journal of the Linnean Society, 62: 89-107.

– Zamora-Silva, A. &  Malaquias, M. A. E. (2016). Diet preferences of the Aglajidae: a family of cephalaspidean gastropod predators on tropical and temperate shores. Journal of the Marine Biological Association of the United Kingdom 96: 1101–1112.