A generalized table indicating the diet of the major sea slug groups. 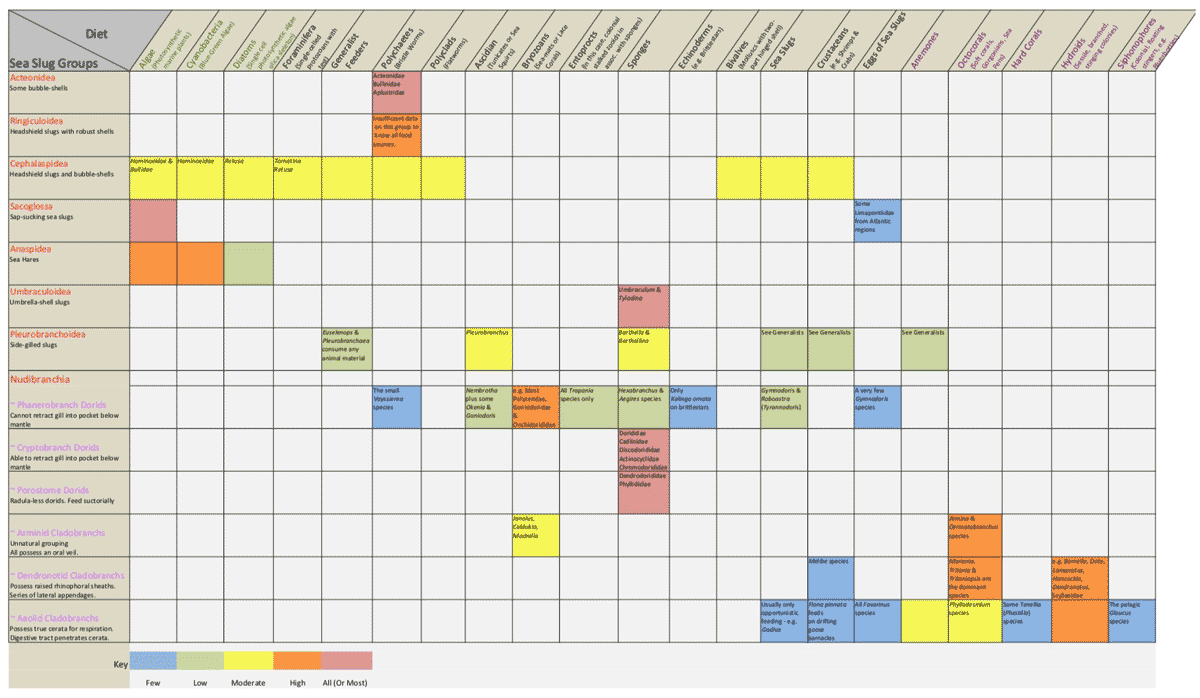 About the table
The above is just an image for navigation purposes and will not show the latest revisions/corrections. Use the link to access the most recent version. Zoom or resize to suit your screen. (Google account not required)

The table is simplified to:
– The better-known sea slug groups
– The major food preferences

The coloured key serves to provide a visual approximation of the proportion of that sea slug group preying upon that particular food source. They are an estimate as an aid to find general trends and not based upon meticulous calculation.

Be aware that there are always exceptions and obscure examples but the table can act as a guide for those sea slugs that are more commonly encountered. There is still a lot to learn and record concerning sea slug diets.

In interpreting the table and drawing conclusions therefrom, care should be taken to be aware of how the sea slug groups are comprised and how the diet sources may in some instances be categorized into smaller recognizable units. Also, remember that it is the groupings that are represented not species. Species usually have most specific dietary requirements – even within a diet group.

What does the Feeding Preferences Table indicate to us?
(Generalizations on a generalized table)

Prey popularity across groups
The first overall observation, in looking at the number of diet headings, supports the contention that the sea slugs, as a whole, possess a diverse diet, encompassing almost every marine invertebrate taxon and much of the marine plant life as well.

The second observation, in looking down the columns, would be noting that some prey are represented across several groups, for example, those sea slugs that prey upon sponges and those that prey upon algae are abundantly populated. Conversely, other prey remain the target of just a single group, for example, the cnidarians (possession of stinging cells) are almost solely preyed upon by the cladobranch nudibranchs – the aeolids, arminids and dendronotids.

Prey popularity within groups
The rows of coloured squares tell us that two of the sea slug groups in particular utilize a great diversity of food types while a number of other groups have food preferences that are limited to a single type.

– The headshield slugs (Cephalaspidea) and the phanerobranch nudibranchs exhibit the greatest diversity of diet across their groups.

– The side-gilled slugs (Pleurobranchoidea) have a somewhat broad diet across the group but this is influenced by the generalist nature of the diet of some members.

– The aeolid and dendronotid nudibranchs have a diet mostly restricted to cnidarians although filling many squares in the table. This is an artefact of the table through the way the cnidarians have been represented by their component sub-divisions, giving an impression of higher diversity at first glance.

– The cryptobranch and porostome nudibranchs – sponge diet, the Sacoglossa and the sea hares (Anaspidea) – algae and relatives diet, all have a diet that is restricted to a single type of food source.

– The fact that two sources are utilised in the arminid nudibranchs – bryozoans and octocorals may be an indicator of the unnatural grouping of its members.

– We would expect that groups with a relatively small membership would tend to show a narrow diet and the umbrella-shelled slugs (Umbraculoidea) are a good example of this.

– The blue coloured squares bring to our attention that a small number of species in larger groups have broken out to become specialised feeders on different dietary sources to that consumed by the greater number of their brethren.

The link between diet and morphology
In most instances the penetration of a sea slug group into a certain habitat is based upon the food source available to them in that habitat. The evolution of their digestive and defensive systems and their body form has been predicated by their diet. More on this to follow.

– Rudman, W. B. (1970). A revision of the genus Philine in New Zealand with descriptions of two new species (Gastropoda, Opisthobranchia). Journal of the Malacological Society of Australia 2(1): 23-34.

– Rudman, W. B. (1972). The anatomy of the opisthobranch genus Hydatina and the functioning of the mantle cavity and alimentary canal. Zoological Journal of the Linnean Society, 51: 121-139.

– Rudman, W. B. (1979). The ecology and anatomy of a new species of aeoiid opisthobranch mollusc; a predator of the scleractinian coral Porites. Zoological Journal of the Linnean Society, 65: 339-350.

– Rudman, W. B. (1981a). Further studies on the anatomy and ecology of opisthobranch molluscs feeding on the scleractinian coral Porites. Zoological Journal of the Linnean Society, 71: 373-412.

– Rudman, W. B. (1981b).The anatomy and biology of alcyonarian-feeding aeolid opisthobranch molluscs and their development of a symbiosis with zooxanthellae. Zoological Journal of the Linnean Society, 72: 219-262.

– Rudman, W. B. (1982). The taxonomy and biology of further aeolidacean and arminacean nudibranch molluscs with symbiotic zooxanthellae. Zoological Journal of the Linnean Society, 74: 147-196.

– Jensen, K. R. (1997). Evolution of the Sacoglossa (Mollusca, Opisthobranchia) and the ecological associations with their food plants. Evolutionary Ecology 11: 301–335.

– Gosliner, T. M. & Valdes, A. (2002). Sponging off of Porifera: New Species of Cryptic Dorid Nudibranchs (Mollusca, Nudibranchia) from the Tropical Indo-Pacific. Proceedings of the California Academy of Sciences Vol. 53, No. 5, pp. 51-61.

– Frick, K. (2003). Response in nematocyst uptake by the nudibranch Flabellina verrucosa to the presence of various predators in the Southern Gulf of Maine. Biological Bulletin, 205: 367–376.

– Zamora-Silva, A. & Malaquias, A. E. (2016). Diet preferences of the Aglajidae: a family of cephalaspidean gastropod predators on tropical and temperate shores. Journal of the Marine Biological Association of the United Kingdom, 96(5), 1101–1112.