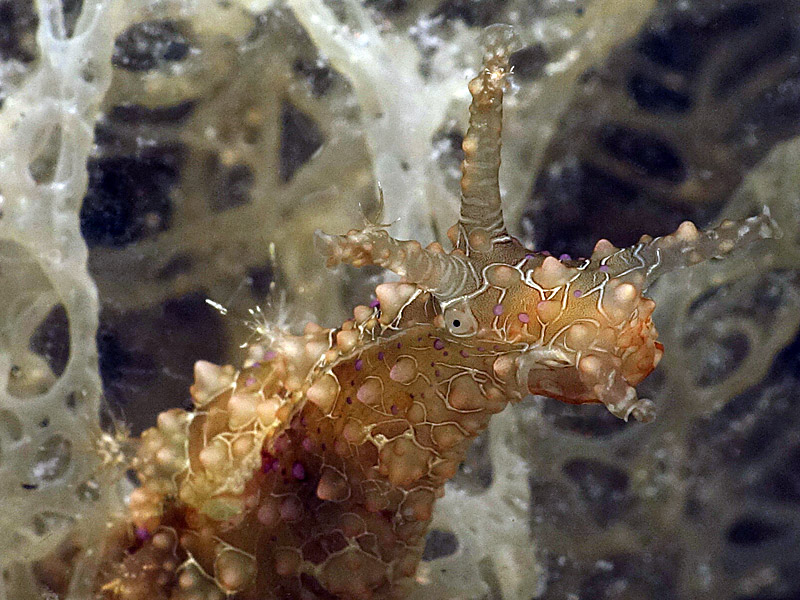 It has long been established that the algae are the base upon which the marine food web is built and sustained. Algae are an important food source for numerous marine animals across many different phyla and the sea slugs are no exception. (Algae, in the sense used here and for convenience, also includes diatoms and cyanobacteria although technically not correct.) The greater majority of sea slugs are carnivorous though, with most having evolved a highly specialised diet. Of the herbivorous category, most of those too have become specialised in their food selection, even developing extraordinary associations with their prey. The better known of the sea slugs that consume algae belong to three major groups.

– Herbivorous feeders are well represented among the Cephalaspidea (the headshield slugs). These include the most diverse family of the order, the Haminoeidae and also the largest of the shell-bearing cephalaspideans, the Bullidae. Most carry an external shell and are cryptic in appearance. While some are active during the day many are nocturnal and burrow under the substrate during daylight hours. As well as feeding on agal mats and filamentous algae many are known to prey upon the single-celled microalgae known as diatoms and also cyanobacteria, often called blue-green algae. 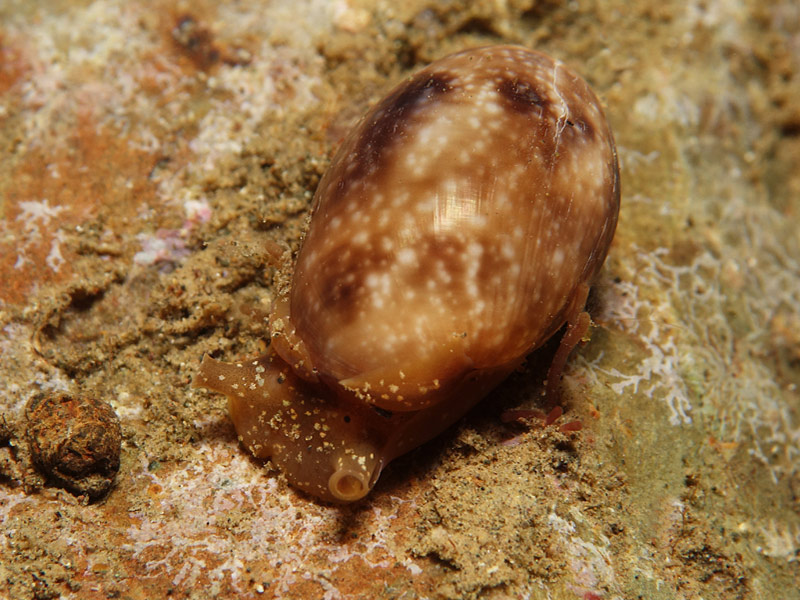 The headshield slug Bulla vernicosa, of the large-shelled Bullidae family, is a nocturnal and cryptic species, emerging at night from beneath the substrate to graze on filamentous algae. 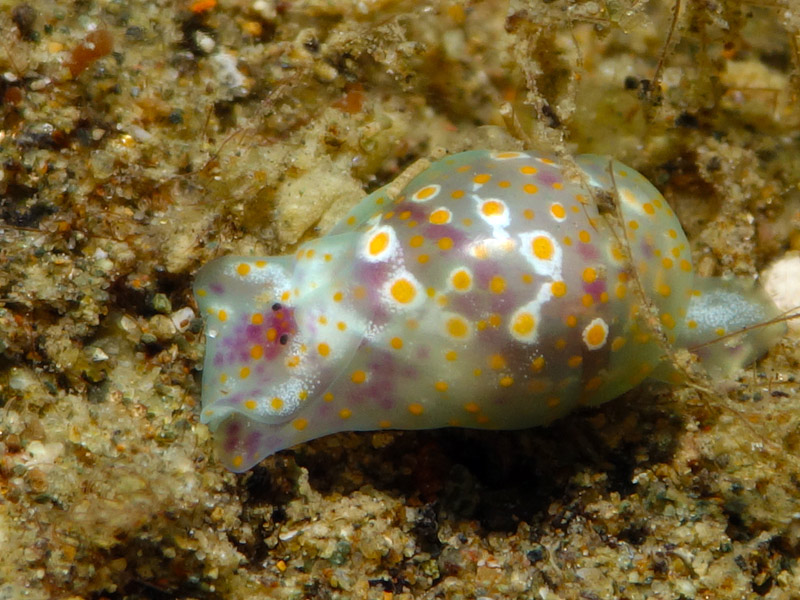 The colourful and recently renamed Lamprohaminoea ovalis, of the Haminoeidae family, grazes the substrate for cyanobacteria (blue-green algae) a photosynthetic bacteria that often forms filaments or mats upon the substrate.

– Generally, the Sea Hares of the Anaspidea feed mostly upon a range of algae – red, green and brown. They ingest the algae as rasped off pieces and grind it up internally using their well-developed gizzard plates. Many of the sea hares grow to a significant size and are considered opportunistic feeders. Although consuming large amounts of the available/selected algae, their own digestion of plant structural materials is thought to be somewhat inefficient and relies heavily instead upon gut bacteria to achieve their growth rates by absorbing not only the released sugars but also the bacterially produced amino acids. The diet of some species is known to change across different algae as they mature (some even seasonally) while others of the order feed on cyanobacteria, or diatoms. Also, studies have suggested that different populations, in different habitats, may consume a different selection of algae. 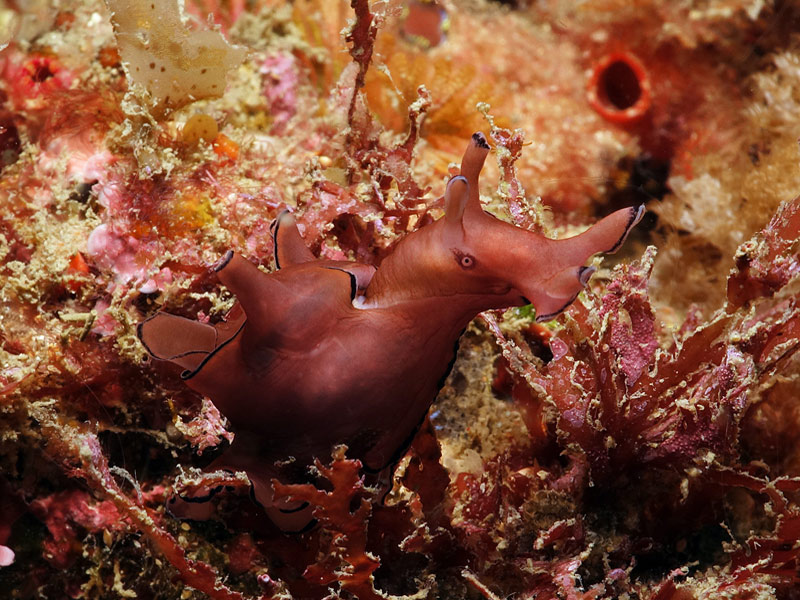 A sea hare that is possibly Aplysia nigrocincta, (previously identified as Aplysia parvula) known to be a gross feeder upon red algae but not limited to a single species. 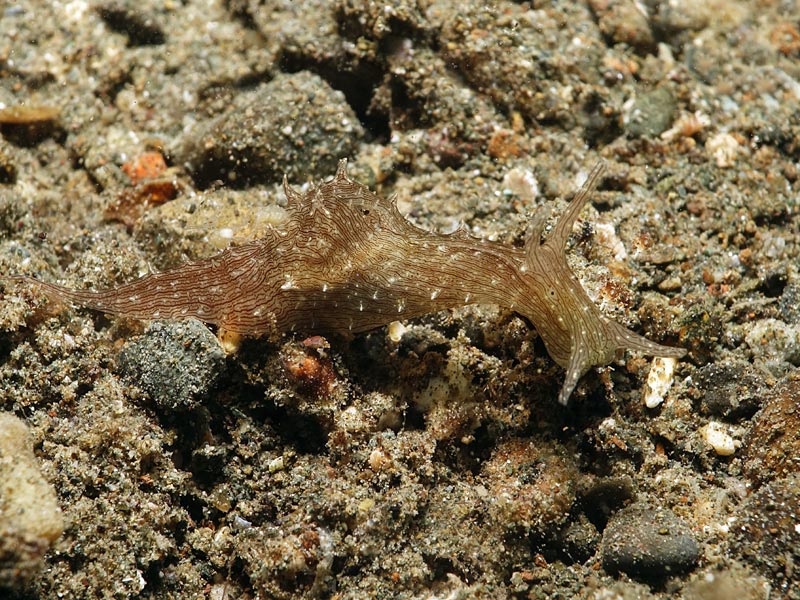 The sea hare Stylocheilus striatus, well camouflaged upon the substrate looks for cyanobacteria to eat. 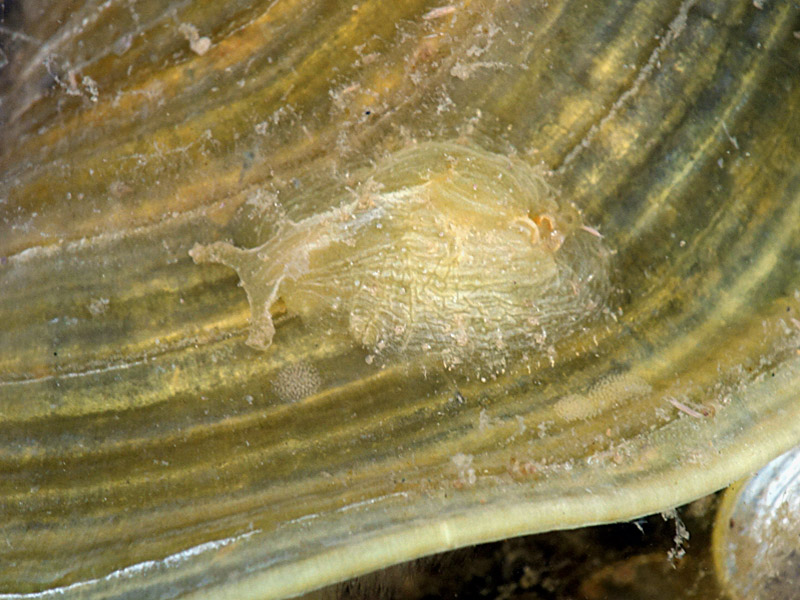 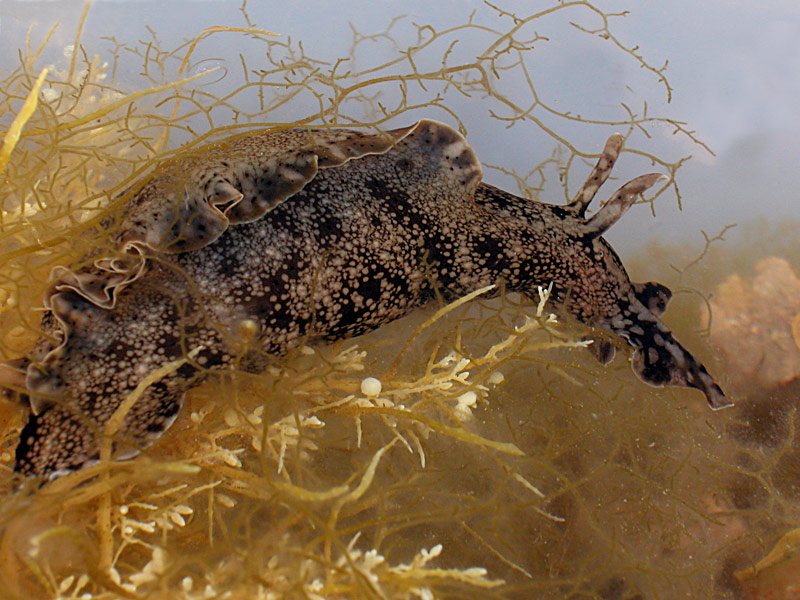 – While all the algae eaters from the above orders bite or rasp off pieces of algae and ingest them for internal breakdown, all the sea slugs of the Sacoglossa, regardless of shape or form, feed by piercing the cell wall of the algae with their dagger or blade-like uniseriate radula and sucking out the cytoplasmic contents for digestion. This is the reason they are referred to as “the sap-sucking slugs” and almost every sacoglossan is an algae feeder, a very few oophagous species excepted. All of the shelled members of the Sacoglossa feed upon their preferred species belonging to just a single genus of algae – the Caulerpa. These include the Oxynoidae, Juliidae and Volvatellidae. The majority of the rest – non-shelled sacoglossans – have mostly moved to other algae and have been recorded as feeding on other siphonalean or septate types of green algae. These include the Plakobranchidae, Hermaeidae, Limapontioidea and Caliphyllidae. These sea slugs exhibit two basic body forms – those with cerata on their dorsum, of a diverse variety, and those that lack cerata but have large parapodia, lateral extensions of the foot on both sides, that may or may not fold up to meet on the midline. Both cerata and parapodia are structures that host chloroplasts taken from their prey. In most, the dissociated chloroplasts from the algae are retained and “farmed” to a varying degree in those parapodia or cerata providing an energy source such that they are referred to as “solar powered slugs”. This is known as kleptoplasty and will be the subject of a separate NudiNote. The siphonalean green algae produce a number of noxious secondary metabolites, which serve as feeding deterrents against general herbivores in the habitat. Sacoglossans however are known to tolerate those compounds and even take them up, concentrating them in their tissues and also modifying them, to use in their own defence. 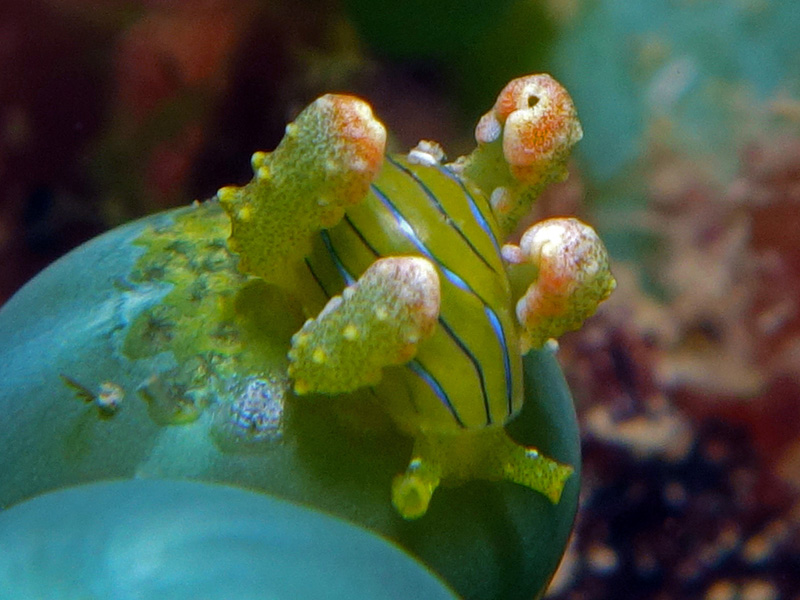 Lobiger viridis, a shell bearing sacoglossan, feeding upon Caulerpa racemosa algae. Chloroplasts from the sucked up cell contents of the algae are stored and farmed within its soft tissues that are exposed to sunlight, such as the parapodia and rhinophores. 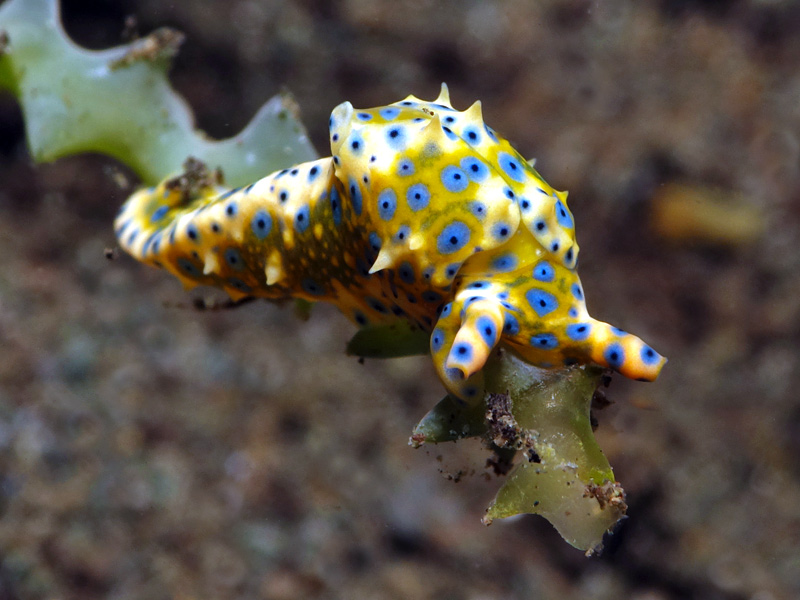 Oxynoe sp. – an undescribed species feeding upon a stem of what appears to be a form of Caulerpa serrulata. 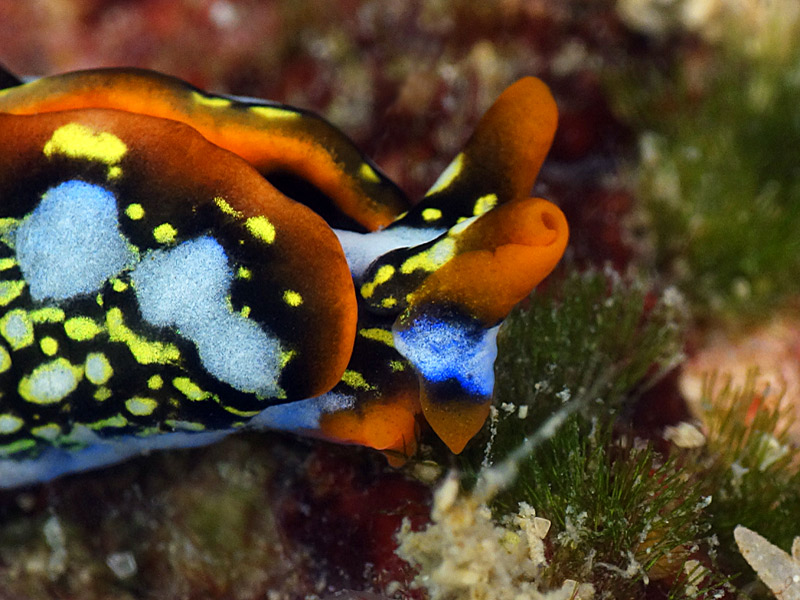 A close-up head aspect of the sap-sucking sacoglossan Thuridilla cf. splendens showing it feeding on tufts of filamentous green algae. 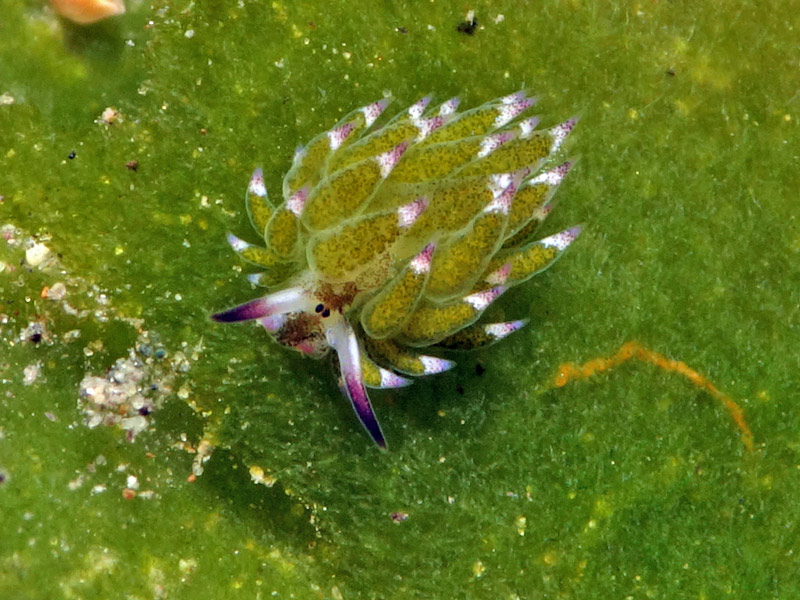 The cerata-bearing sacoglossan Costasiella kuroshimae feeding upon the green algae Avrainvillea sp. The chloroplasts, obtained from the host, can be seen filling the ceratal digestive gland ducts. These provide additional “passive” nutrition to the sea slug. 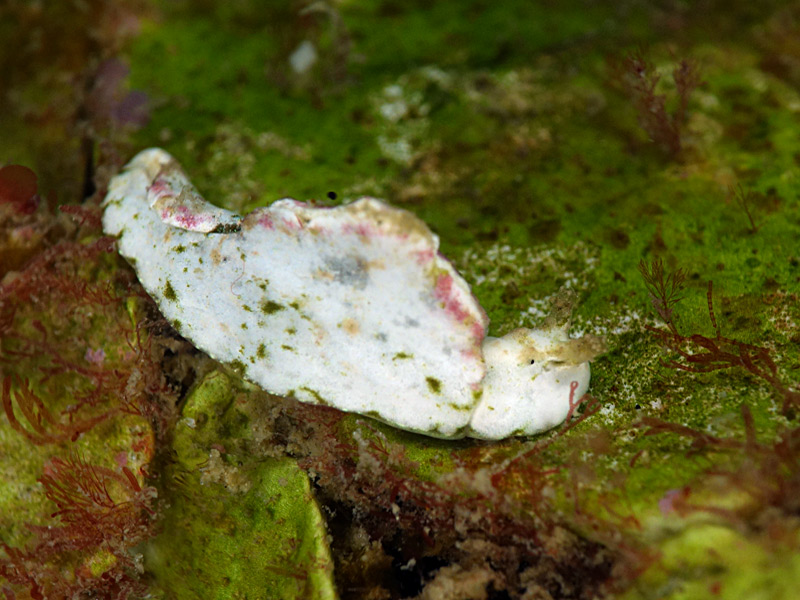 Elysia pusilla (perhaps Elysia sp. in this instance) feeds on the algae Halimeda sp. The zigzag feeding track is obvious in the image – the white regions on the otherwise green Halimeda where the cell contents have been sucked out by the sea slug. This specimen does not display the usual light green colour of the sequestered chloroplasts in the external face of the parapodia, with just small spots being evident. However the pink colouration along the parapodial edges mimics the coralline algae growing on the Halimeda. 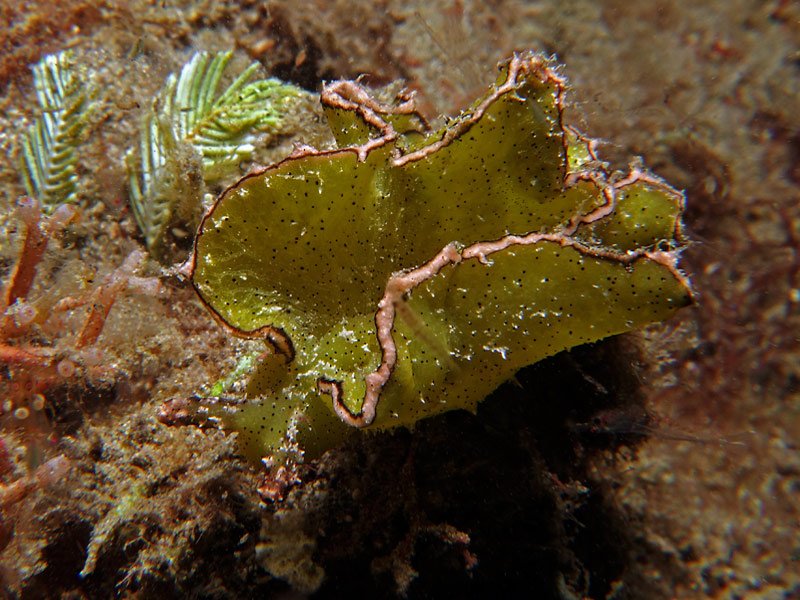 The sacoglossan Elysia tomentosa, with its parapodia unfurled exposing to the sunlight the chloroplasts “farmed” therein, that have been sequestered from its algal prey. The byproducts of the chloroplasts provide nutrients to the slug. Note the extensive vein network in the parapodia that service the chloroplasts. 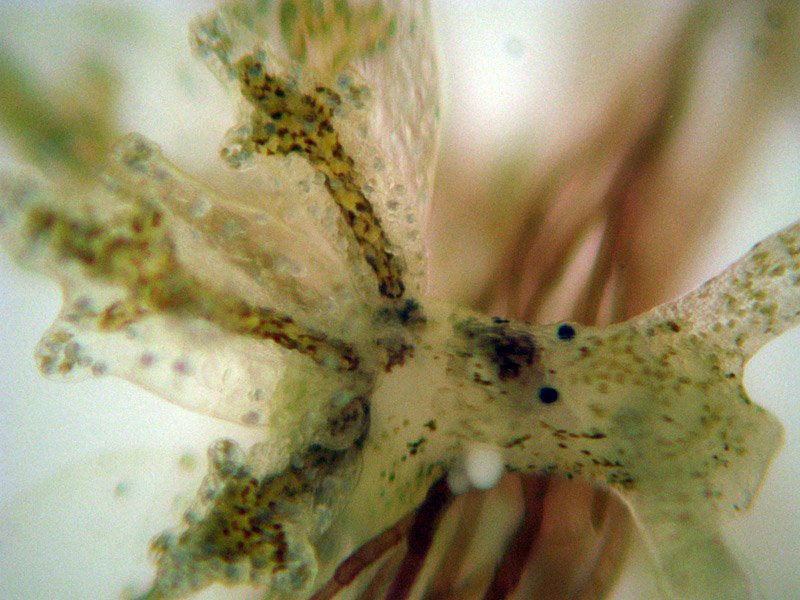 A close-up head aspect of an undescribed sacoglossan Hermaea sp. feeding upon filamentous red algae. This is a cerata bearing sacoglossan. The cruciform digestive duct can be seen within the cerata. Chloroplasts have been sequestered from the host and are being farmed therein as well as in the body wall.

– Jensen, K. R. (1997). Evolution of the Sacoglossa (Mollusca, Opisthobranchia) and the ecological associations with their food plants. Evolutionary Ecology 11: 301–335.

– This NudiNote has been modified from a previously published article in Dive Log Magazine’s – NudiNotes Column, Issue: #385 (December 2020): 17 by David A. Mullins.