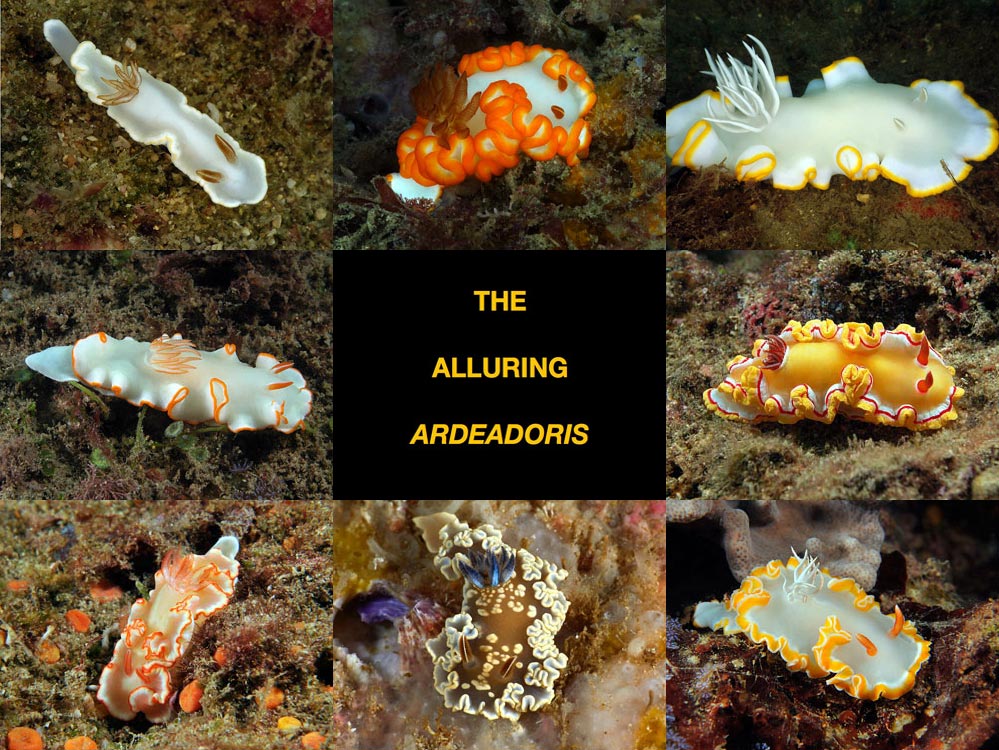 Some nudibranchs are both a delight to find and undemanding to photograph. Every time I happen across a species of Ardeadoris, concerns of composition and exposure just melt away as I enjoy myself, capturing their image in all their glory. Here we have a group of medium to large nudibranchs that fill the camera lens without the requirement of excessive magnification. And how they fill that lens – the colouration is stark but at the same time elegant, the combinations stunning but complimentary and the patterning simple but consummate.

The nudibranch genus Ardeadoris was raised in the Chromodorididae family to hold just a single new species of cryptobranch (can retract gill into a protective pocket below the mantle surface) dorid nudibranch described in 1984 – Ardeadoris egretta. This made it the type species of the genus by monotypy. In raising Ardeadoris, Dr. W. (Bill) Rudman stated in his 1984 paper, The Chromodorididae (Opisthobranchia: Mollusca) of the Indo-West Pacific: a review of the genera: “This is another monotypic genus but Ardeadoris egretta has a number of distinctive features which separate it from all the larger genera. The wide mantle overlap is most distinctive.” He also cites an extremely long oral tube, and differences in reproductive and radula morphology (in depth details of which do not concern us here), as defining the diagnosis. In explaining the choice of name for his new genus Rudman wrote: “The genus name Ardeadoris is from the Latin “ardea”, the heron, a reference to Heron Is, Great Barrier Reef, where the type species is commonly found.” Heron Island wasn’t the Type Location though, as the designated holotype was a specimen from Escape Reef, North Queensland, just north of the well-known tourist destination, Agincourt Reef, most usually accessed from Port Douglas.

Only one other species: Ardeadoris scottjohnsoni Bertsch & Gosliner, 1989, was placed in this genus (the authors expressing their conflict, at the time, about whether it belonged in Thorunna or Ardeadoris.) until the molecular sequencing, more than 20 years later, of the Chromodorididae family by Johnson R. & Gosliner, in 2012. That groundbreaking paper transferred eleven other species into Ardeadoris, ten from Glossodoris (five through molecular testing and a further five by hypothesis) and one from Noumea (a genus now known as Verconia). Those ten Glossodoris were known by taxonomists to be similar in some respects but at the same time to be varying in certain aspects from the other Glossodoris making them somewhat difficult to place definitively. It was almost as if they were temporarily parked in Glossodoris. This uncertainty was resolved by that molecular sequencing.

There are a number of species in the Chromodorididae family, and across several genera in fact, that have a substantially white mantle trimmed with a yellow/orange line to the mantle margin or sub-margin. Many of the current thirteen described Ardeadoris species fall into that general portrait.

This NudiNote presents eight species of Ardeadoris that have, so far, been found in south east Queensland waters but also have a broad west Pacific distribution some even further across the Indian Ocean as far as the Red Sea. While none could be considered common here, a couple are seen occasionally with the others only being recorded through persistent diving over many years on the offshore reefs. These brief descriptions do not do them full justice. There are a total of thirteen described species of Ardeadoris listed on WoRMS (2022). 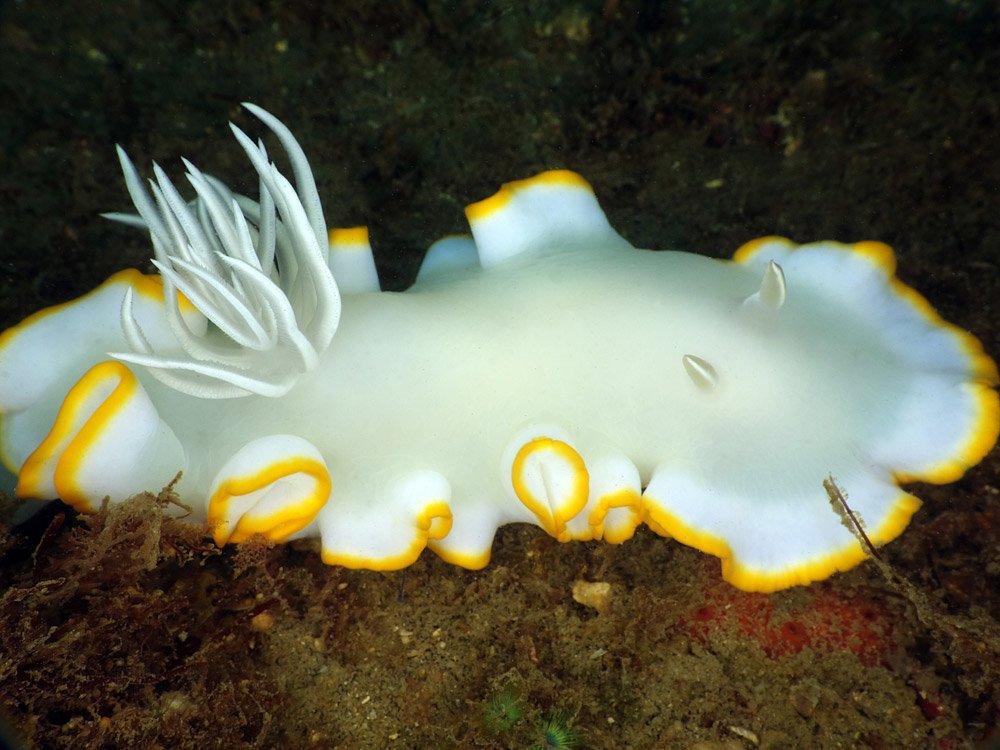 Ardeadoris egretta Rudman, 1984 – The first finding is a never-to-be-forgotten encounter. Large, with a broad smooth mantle wholly white apart from a golden-yellow (sometimes light orange) marginal band with a bright opaque white submarginal band and being thrown into many folds. Foot and tail with narrow opaque white marginal band. Rhinophores are translucent white with a vertical white line up anterior and posterior faces. Distinctive, unusually thin and elongate white gills that move rhythmically. 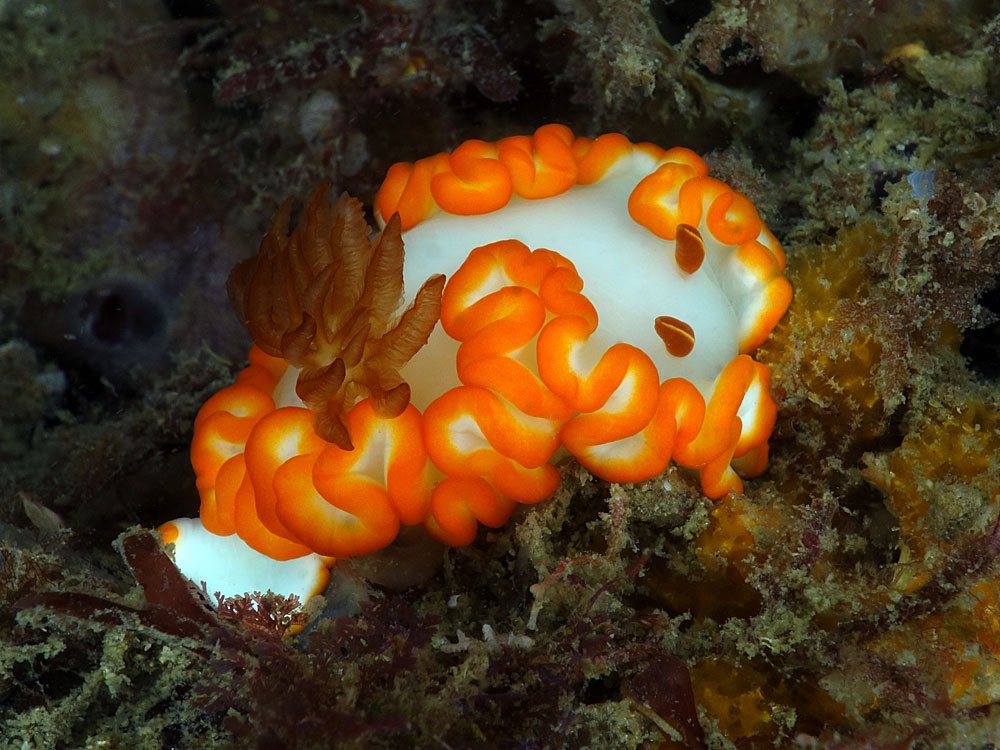 Ardeadoris averni (Rudman, 1985) – Usually smaller than A. egretta, this species too has a broad white mantle but with a “puffy” margin that is bright orange and thrown into many folds. The colour is repeated on the margin of foot and tail (sometimes indistinctly). There is a submarginal vivid opaque white band to the mantle as well. The rhinophores are also orange with a vertical white line running up both anterior and posterior faces. The gills are white with brown edging and move rhythmically. 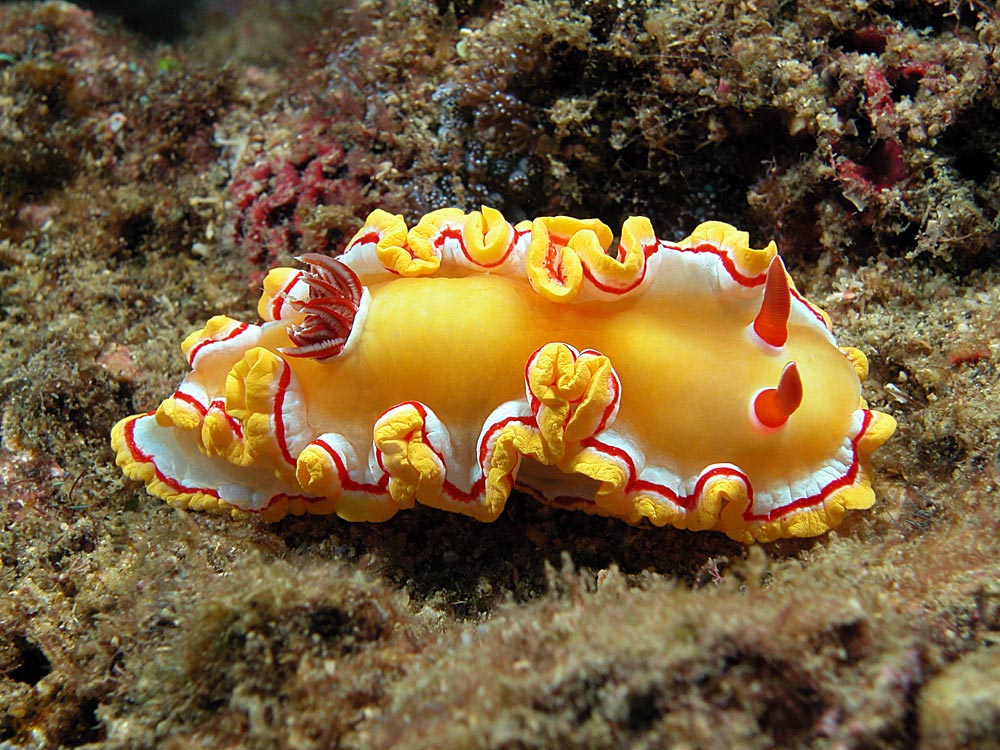 Ardeadoris rubroannulata (Rudman, 1986) – Large, with a smooth, apricot to golden-yellow coloured mantle having a highly convoluted “puffy” margin carrying three bands of colour – outermost yellow followed by submarginal bands of red and white (sometimes the red within the white), this colour patterning being repeated upon the foot/tail, the remainder of which is white. Rhinophore stalks are red, clubs are brown with vertical white line running up both anterior and posterior faces. Gills are translucent white with red edging and move rhythmically. 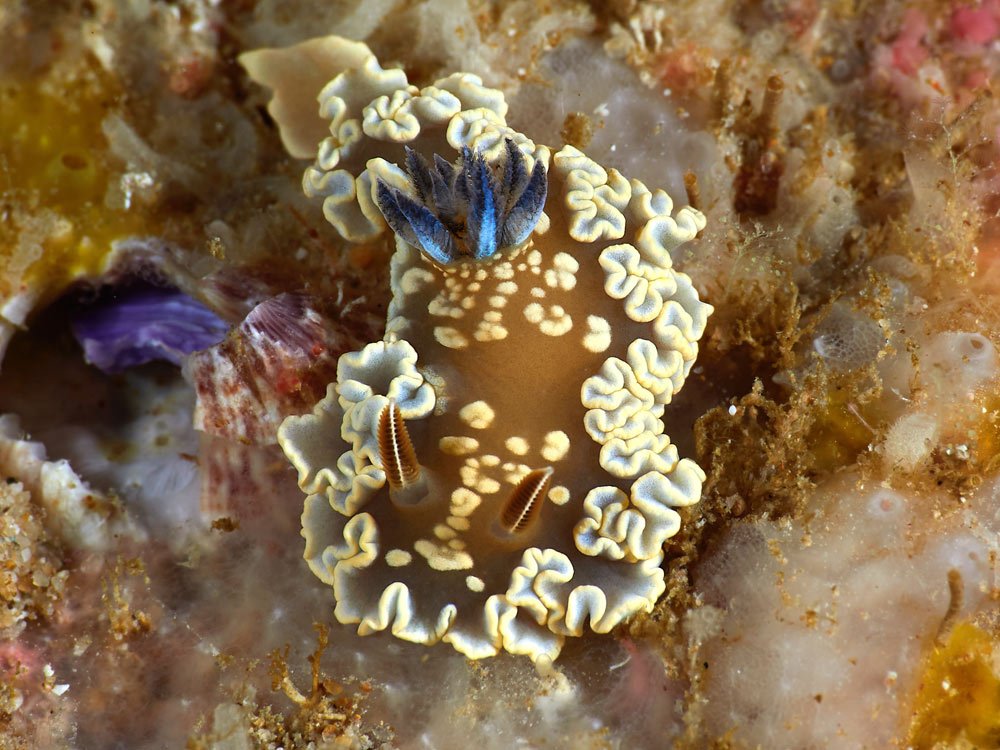 Ardeadoris tomsmithi (Bertsch & Gosliner, 1989) – (Image by kind courtesy of Harvey Braun) – Medium-sized, with a grey to brown coloured mantle carrying slightly raised cream-coloured spots mostly concentrated around the rhinophores and gill. The mantle margin is highly ruffled and bears a yellow band with a broader white/grey submarginal band. The margin of foot/tail carries a yellowish band. The rhinophore stalks are translucent white while the clubs may be brown or dark blue in colour with a vertical white line running up both anterior and posterior faces. Gills are dark blue, often lighter basally, with some white trimming and move rhythmically. 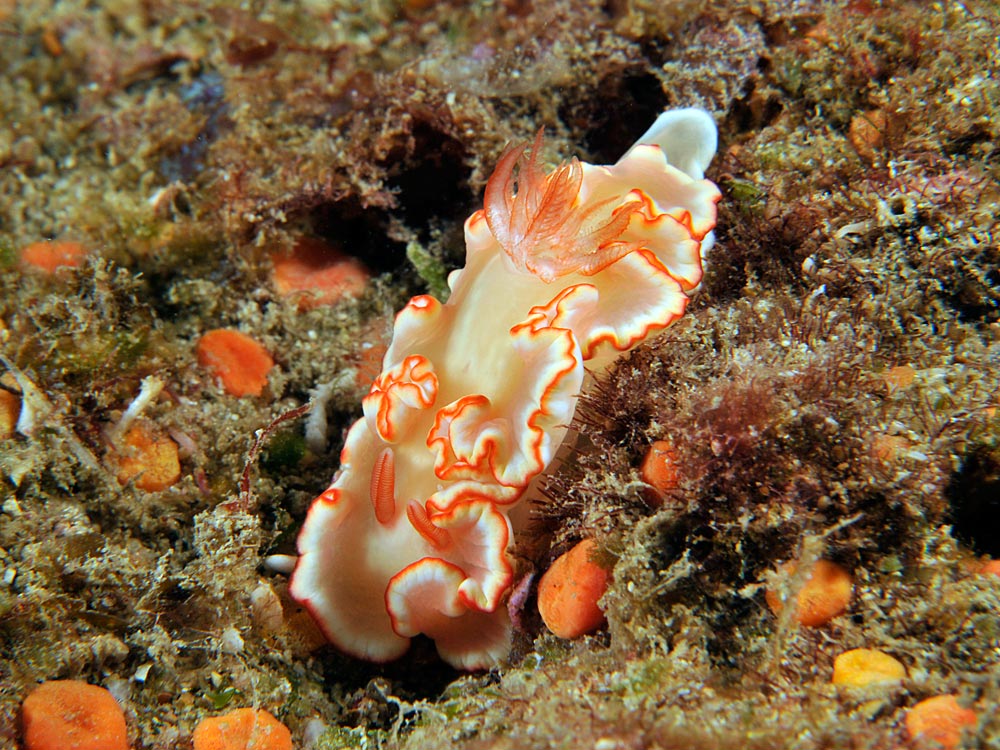 Ardeadoris symmetrica (Rudman, 1990) – Medium sized, with a translucent mantle overlaid by an irregular shaped band of opaque white running from anterior to rhinophores to behind gills that is symmetrical about the midline (hence name). There is a thin (in comparison to its relatives) red line to the margin with a submarginal white band. The margin is thrown into several large folds and many small convolutions. The foot/tail carries an opaque white border. Rhinophores are watery red with a vertical red line running up both anterior and posterior faces. Gills are translucent white with red edging and move rhythmically. 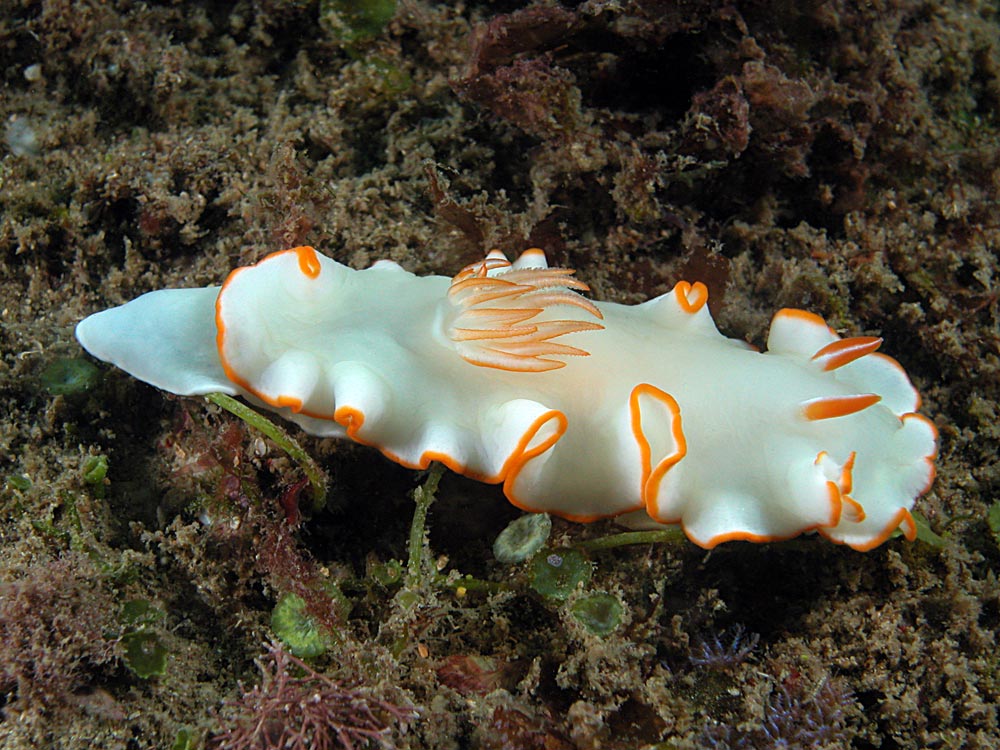 Ardeadoris electra (Rudman, 1990) – Medium sized with semi-translucent white mantle carrying yellow/orange band to the margin and a broader opaque white submarginal band but only opaque white to the margin of foot/tail. The mantle margin has a number of folds but a distinctive large infold halfway along. The rhinophore clubs are orange/brown and bear broad white lines up both the anterior and posterior faces. The gills have translucent white sides (lamellae) and orange-brown inner and outer faces and move rhythmically. 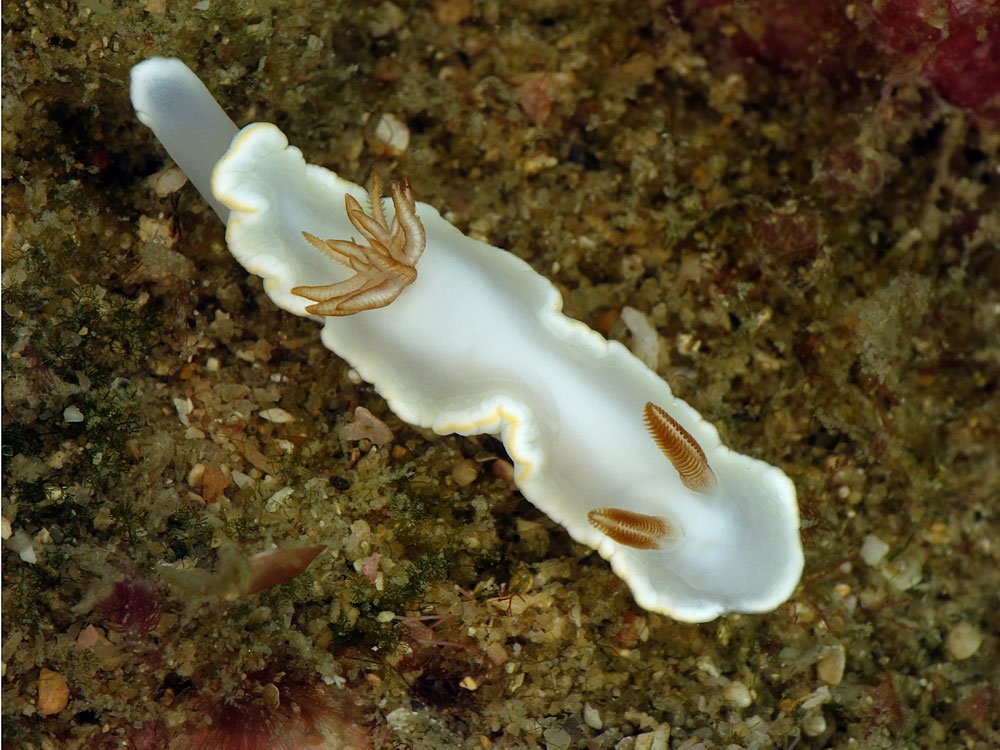 Ardeadoris angustolutea (Rudman, 1990) – This species is “the odd one out” of the transferees to Ardeadoris. Originally placed in the genus Noumea. A small species more elongate than its relatives. The mantle is translucent creamy-white (sometimes appearing bluish) with a wide midline opaque white band extending from anterior to the rhinophores to just posterior to the gill being pinched at the midpoint. The margin carries a bright opaque white band with the very edge carrying a thin yellow to orange line (sometimes interrupted) and is formed into a few modest convolutions but with a particularly distinctive infold located on both sides halfway along. The foot/tail is coloured similarly as the mantle but at times lacks the yellow/orange line to the edge. The rhinophores are tan with a vertical white line up anterior and posterior faces. Gills are tan with white lamellae and move rhythmically. 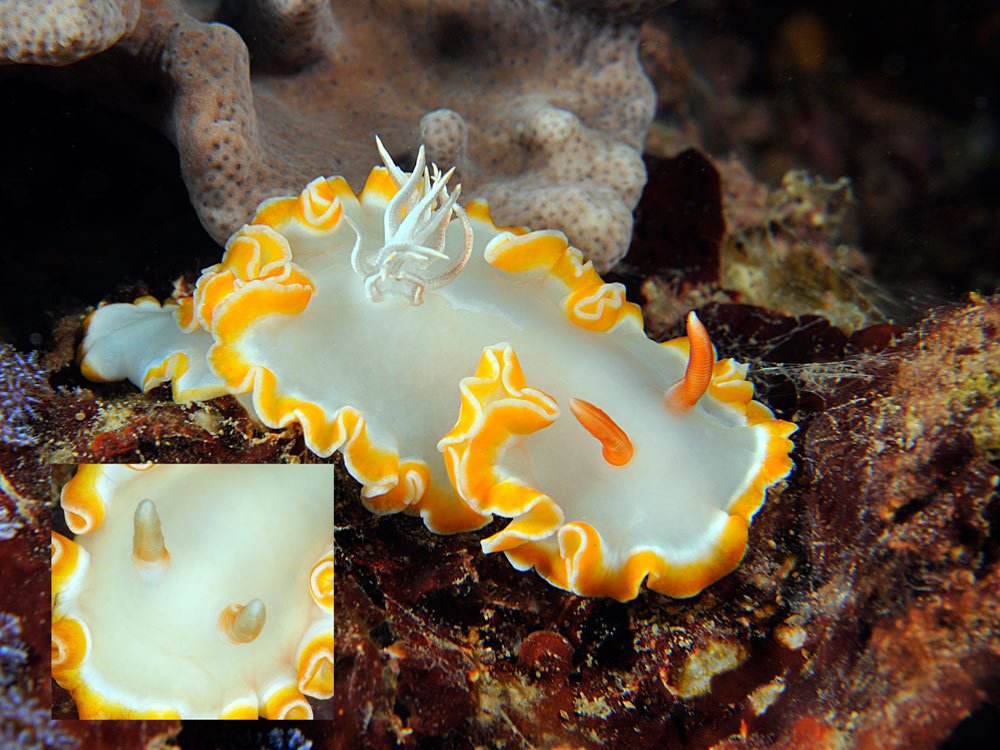 Ardeadoris sp. 01 Undescribed – This species currently placed in Ardeadoris based on external appearance: Elongate oval mantle with significant overhang; Many folds to mantle margin together with a distinctive large in-fold on each side halfway along; The uncanny similarity of the gills to the distinctive gills of Ardeadoris egretta. The mantle is semitranslucent white. The very edge of the mantle carries a quite narrow opaque white band inside of which is a wide golden-yellow band, darkest laterally, and then a narrower vivid opaque white band all repeated upon the foot/tail margin. Rhinophores are light orange both stalk and club with a white tip. There are no vertical white lines up the rhinophores however we have recorded a specimen where the rhinophores are white with the faintest hint of a vertical orange line (see inset). Gills are translucent white with opaque white pigment on the outer face. A faint trace of yellow pigment is visible at the very tip of each gill.

Gosliner et al., (2018), list and illustrate a further five putative species of Ardeadoris from the Indo-Pacific.

References:
– Rudman, W. B., (1984) The Chromodorididae (Opisthobranchia: Mollusca) of the Indo-West Pacific: a review of the genera. Zoological Journal of the Linnean Society 81: 115-273.

– Rudman, W. B, (1990.) The Chromodorididae (Opisthobranchia: Mollusca) of the Indo-West Pacific: further species of Glossodoris, Thorunna and the Chromodoris aureomarginata colour group. Zoological Journal of the Linnean Society, 100(3): 263-326.

– This NudiNote has been modified from a previously published article in Dive Log Australasia Magazine – NudiNotes Column, Issue: #393 (April 2022): pp. 10-12 by David A. Mullins.