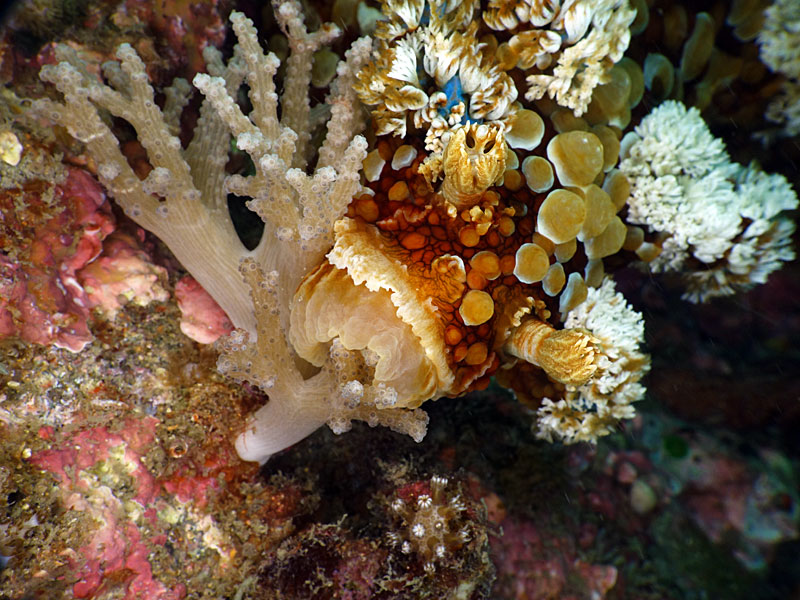 Many people are surprised to learn that some nudibranch sea slugs are actually corallivorous, that is they feed upon corals. Those that keep corals in aquariums however know only too well the havoc certain nudibranchs can cause particular corals. Corals don’t look to be particularly appetising but a little explanation of their anatomy will help.

There are two basic coral types. To generalise, these are commonly referred to as soft corals (octocorals – eight tentacles to their polyps) and hard or stony corals (six, or multiples of six, tentacles to their polyps), both types being preyed upon by certain nudibranchs. Regardless of type, all corals have soft tissue, whether that be the thin layer of polyps all connected together by the coenosarc tissue that covers the corallite skeleton of the hard corals or, the polyps and the coenenchyme (a thin layer in the polyps but otherwise forms the bulk of the soft coral mass as supporting tissue) in the soft corals. The form and composition of structure is indeed diverse but to generalise again, the hard corals have that corallite skeleton for support that is secreted by the polyps whereas the soft corals generally have sclerites (small spiny internal spicules of various shape and size) within their coenenchyme tissue, in varying densities, for support. The soft corals include the gorgonian sea fans that have a fleshy covering over a horny axis that develops into long stems or a fan-like shape.

These corallivorous nudibranchs have evolved to feed upon that soft tissue and polyps. All belong to the nudibranch suborder Cladobranchia and all are obligate coral feeders. These include some species from each of the major groups within the Cladobranchia: Arminina, Dendronotina and Aeolidina. Not all corals though are subject to such predation with most corallivorous nudibranchs demonstrating a distinct preference in their choice of prey, although there have been some reports of host switching if the preferred species is unavailable.

In the Arminia it is the Arminidae family, principally the Armina and Dermatobranchus, that prey upon the soft corals (including gorgonians and also the related sea pens) but generally speaking the specific diet of many is not well known. 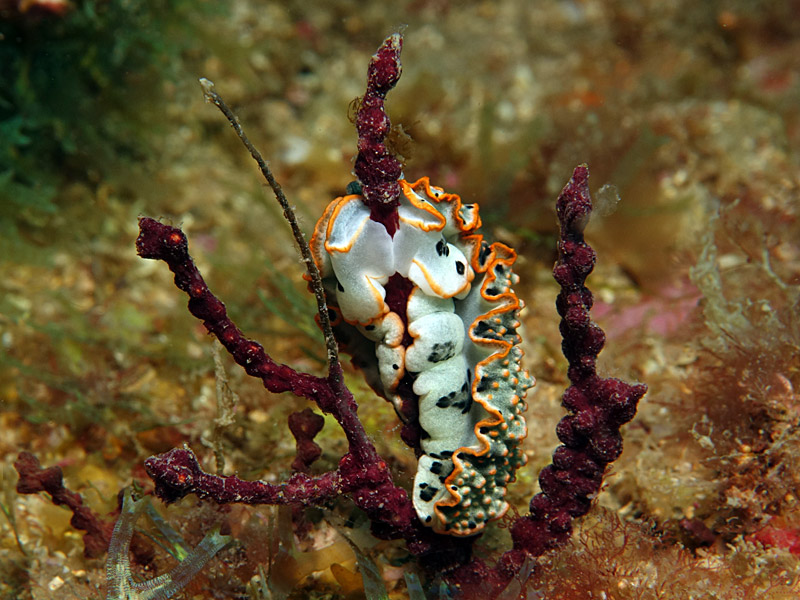 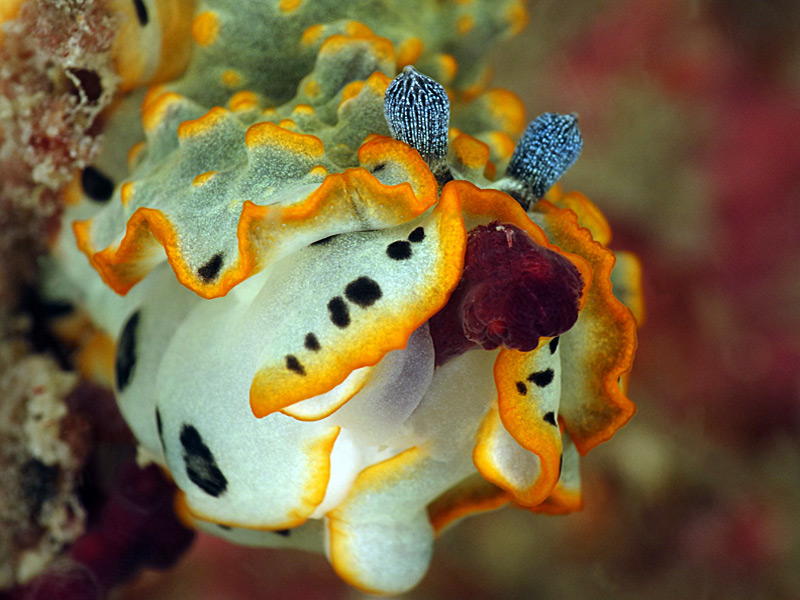 A close-up anterior view of the head of the arminid Dermatobranchus ornatus as it works along the stem stripping the flesh and the polyps. 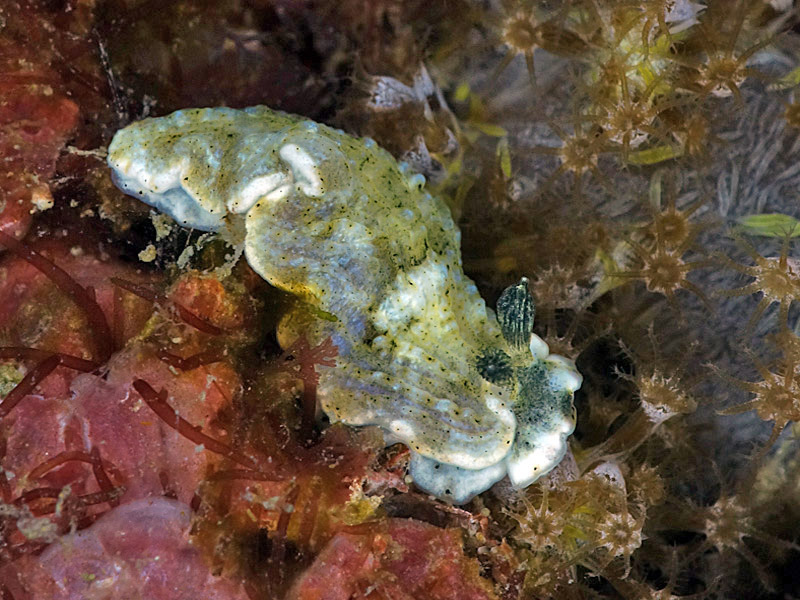 An undescribed Dermatobranchus species feeding on the exposed polyps of an unknown octocoral. The embedded spicules are readily apparent in the octocoral’s stem.

Among the Dendronotina, those cladobranchs with raised rhinophore pockets and well developed dorso-lateral secondary gills down each side of the body, it is the members of the Tritoniidae family that feed on the soft corals (including gorgonians) with Tritonia, Tritoniopsis and Marionia being the best known. 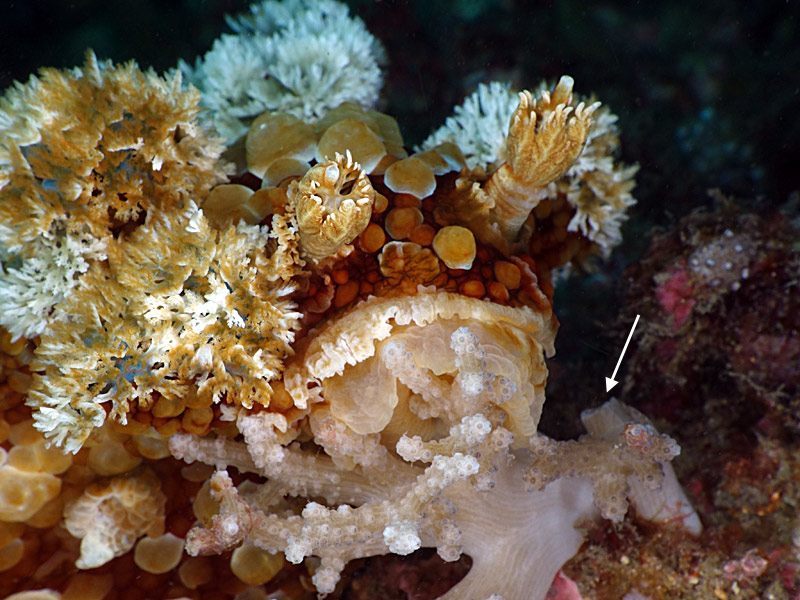 A close-up head-on image of the dendronotinid Marionia rubra devouring whole branches of the soft octocoral Lemnalia sp. The branch to its immediate left (arrowed) has been completely devoured. The whole colony was consumed in less than 30 minutes. Below is a video of that branch being eaten.

Above: Marionia rubra is feeding on the octocoral Lemnalia sp. The brittle stars are in the wrong place at the wrong time becoming by-catch. 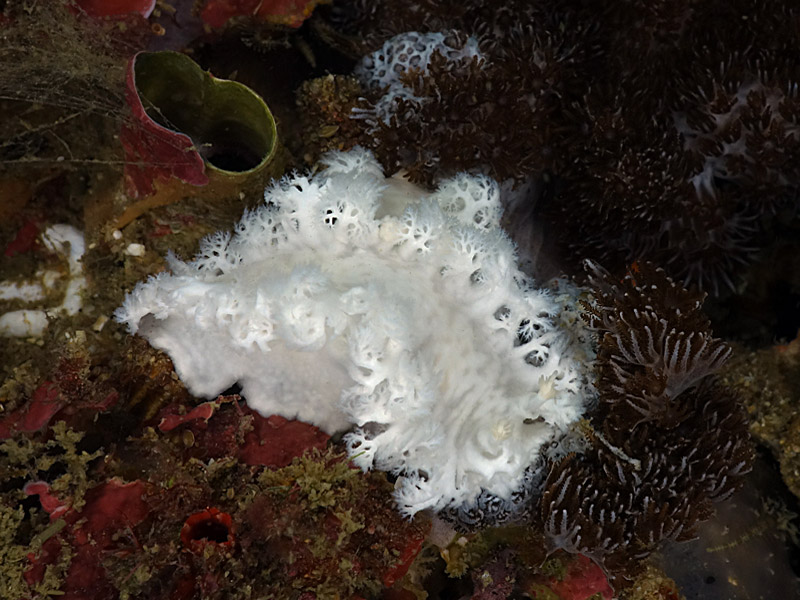 The dendronotinid Tritoniopsis elegans feeding on the soft coral Capnella sp. Interestingly, even though under attack, many of the polyps are still expanded in feeding mode. 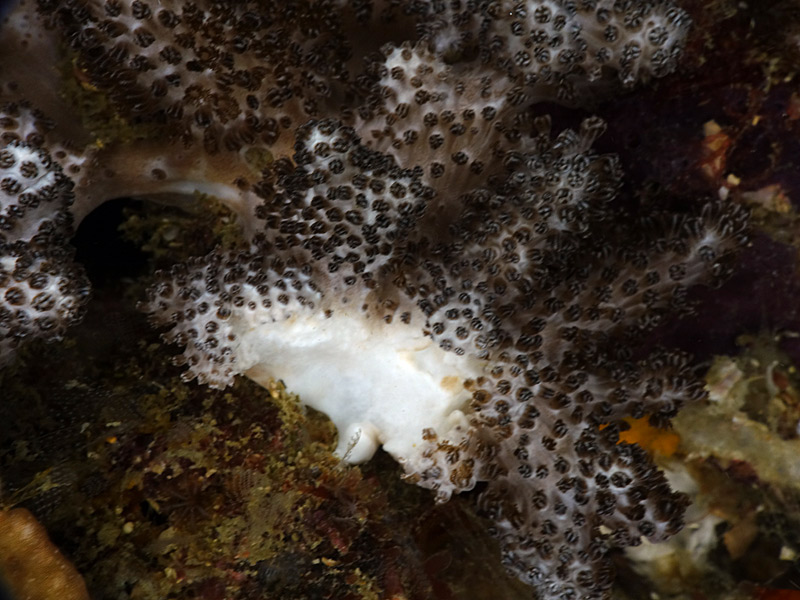 The white feeding scar produced by Tritoniopsis elegans on the soft coral Capnella sp. is quite obvious. The nudibranch would seem to mimic a feeding scar when on the coral. All the polyps of the coral have been retracted.

The Aeolidina has a number of corallivorous species. These include some members of the Tenellia/Phestilla (specifically those formerly/currently known as Phestilla depending on taxonomy followed), that prey on hard corals, and the Phyllodesmium, that prey on soft corals (including gorgonians). Unlike their other relatives in the Aeolidina, the Phyllodesmium and Phestilla/Tenellia do not sequester the nematocysts (stinging cells) from their prey for defence purposes, even if they have cnidosacs, it being surmised that the nematocysts of their prey corals are not powerful enough for that defensive purpose. Many though have evolved toxic glands on their cerata plus colour and morphology (structural form) to match/mimic their host becoming cryptic in situ to provide protection. The cerata of most can also be autotomized to distract predators as a further defensive attribute. Many of these aeolids are also known to take up zooxanthellae from their host and farm them (for varying periods) symbiotically in their cerata such that they have often been referred to as “solar-powered” nudibranchs. 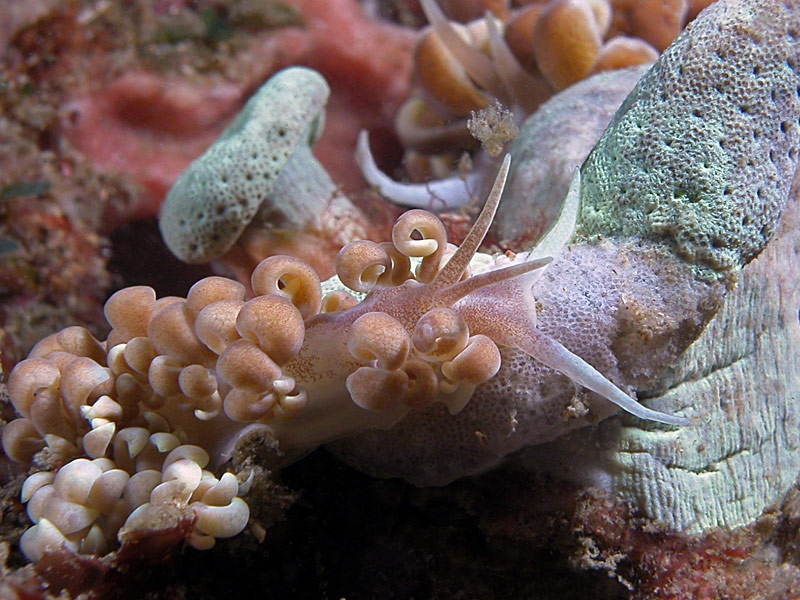 The tissue of this Sarcophyton sp. octocoral is being eaten by the aeolid nudibranch Phyllodesmium magnum. Species of Phyllodesmium are specialised feeders on octocorals. The stiffening sclerites in the soft coral’s tissue may often be seen piled up at the base as the nudibranch eats away the surrounding soft tissue causing them to fall out. 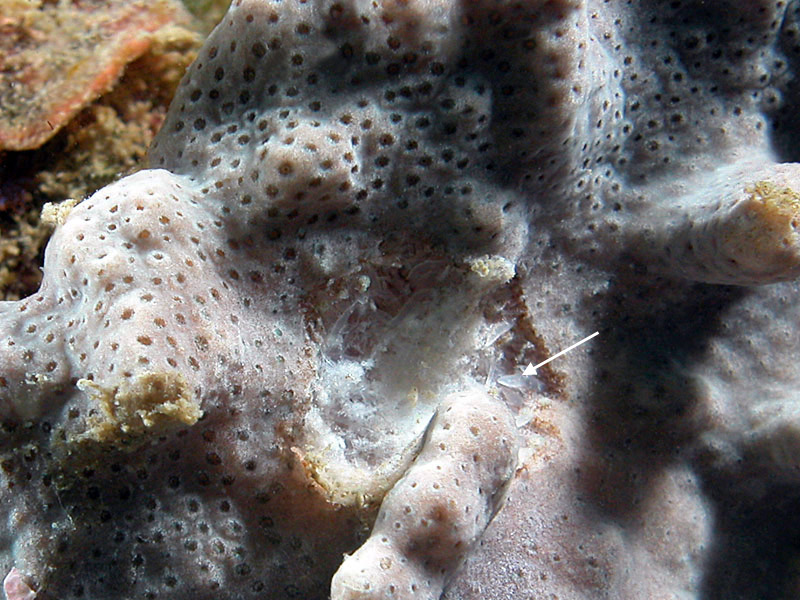 A feeding scar on the soft coral Sinularia sp., produced by the corollivorous aeolid Phyllodesmium magnum. The sclerites in the coral tissue (arrowed) can be seen protruding. 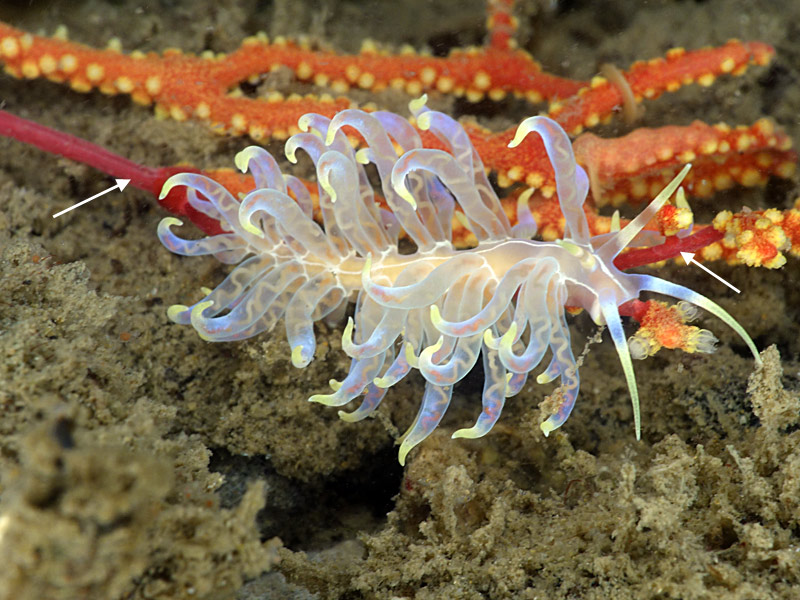 Predator and prey. In the right image the aeolid nudibranch Phyllodesmium rudmani that feeds upon and mimics both in colour, and incredibly also in structure, the soft coral Xenia sp. shown on the left. 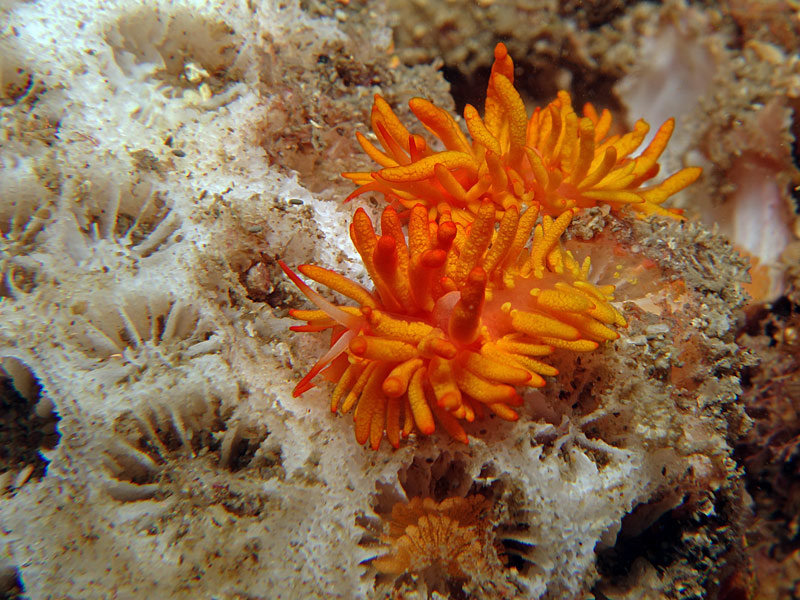 A pair of aeolids – Tenellia melanobrachia (or Phestilla melanobrachia depending on the taxonomic work followed) of the orange colour form, consuming all the colourful polyps and connecting tissue of the hard coral – Tubastraea sp. leaving behind the bare stark-white skeleton. These nudibranchs mimic the bright colour and form of their living hard coral host and are difficult to discern when they first commence feeding on a colony. 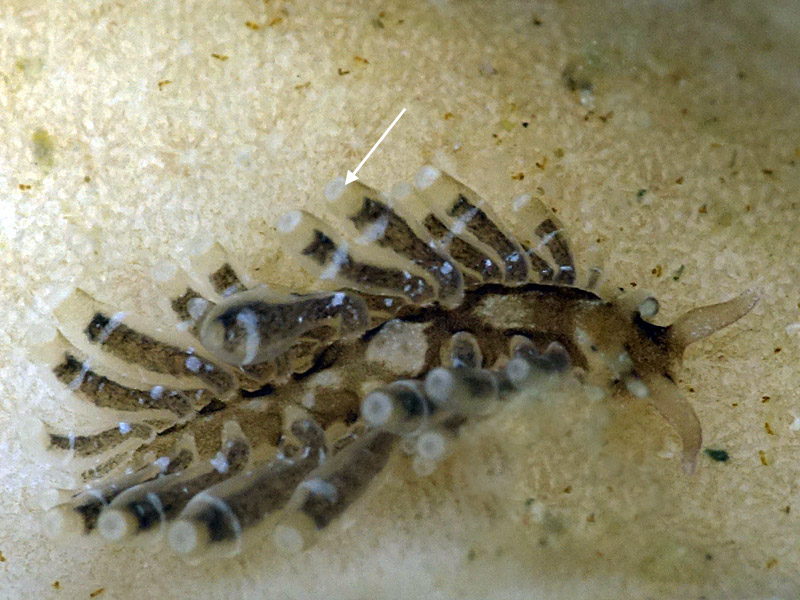 Tenellia/Phestilla poritophages on its host Porites sp. The cerata have become modified from the more typical aeolid arrangement whereby the cnidosac for storage of nematocysts has been lost and the tip flattened/rounded and containing instead, a ring of glands that secrete noxious compounds for their defence. 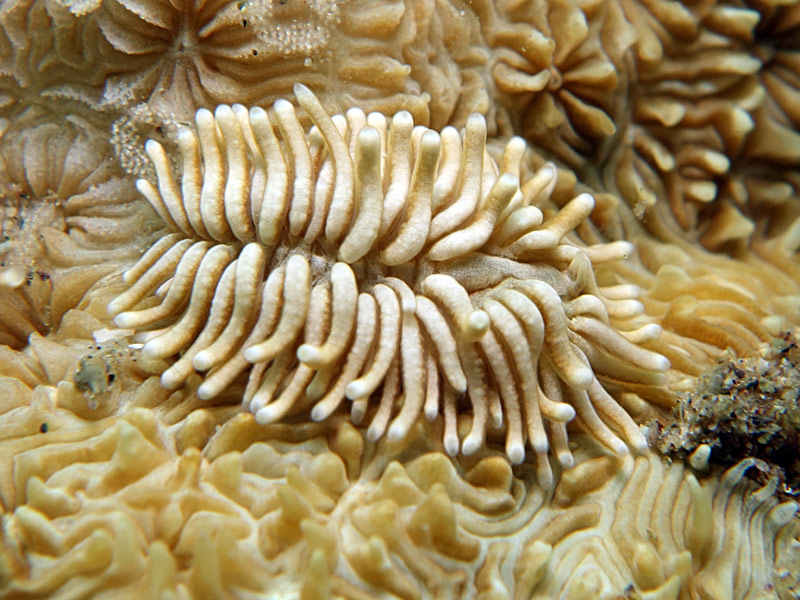 The newly described aeolid – Tenellia/Phestilla viei on its host the hard coral Pavona explanulata. The cerata of the nudibranch are laid out flat to mimic the ridges of its host. This specimen exhibits low density of the symbiont dinoflagellates (zooxanthellae) in its cerata and therefore its lighter colour makes it less cryptic against its host than usual.

I’m indebted to Terry Farr for guidance on the octocoral identifications.

– Rudman, W. B. (1979). The ecology and anatomy of a new species of aeoiid opisthobranch mollusc; a predator of the scleractinian coral Porites. Zoological Journal of the Linnean Society, 65: 339-350.

– Rudman, W. B. (1981a). Further studies on the anatomy and ecology of opisthobranch molluscs feeding on the scleractinian coral Porites. Zoological Journal of the Linnean Society, 71: 373-412.

– Rudman, W. B. (1981b).The anatomy and biology of alcyonarian-feeding aeolid opisthobranch molluscs and their development of a symbiosis with zooxanthellae. Zoological Journal of the Linnean Society, 72: 219-262.

– Rudman, W. B. (1982). The taxonomy and biology of further aeolidacean and arminacean nudibranch molluscs with symbiotic zooxanthellae. Zoological Journal of the Linnean Society, 74: 147-196.

– Fabricius, K. & Alderslade, P. (2001). Soft Corals and Sea Fans: A comprehensive guide to the tropical shallow-water genera of the Central-West Pacific, the Indian Ocean and the Red Sea. Australian Institute of Marine Science.

– This NudiNote has been modified from a previously published article in Dive Log Magazine’s – NudiNotes Column, Issue: #384 (October 2020): 17 by David A. Mullins.