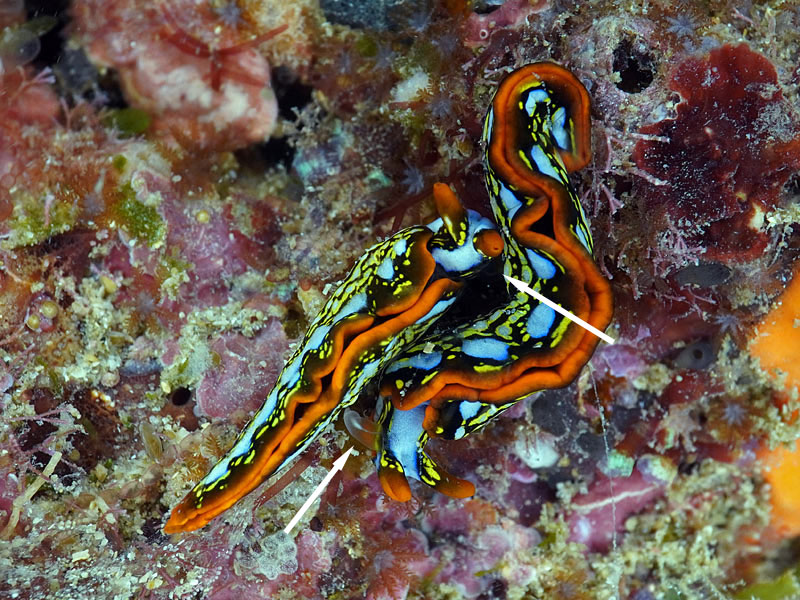 Recently (Feb, 2022) I captured an image of a pair of our Thuridilla cf. splendens apparently engaging in the act of hypodermic insemination (shown above). The image shows both specimens of the pair with a swollen everted penis pushed up against the external surface, posteriorly on the right parapodium of their partner (enlargements below). Due to the prevailing conditions of heavy surge I was unable to record what actions may have followed or for that matter what might have preceded this moment. None of the literature makes any mention of hypodermic insemination by the Thuridilla, but this or any form of their mating ritual/process seems not to have been seriously studied/recorded. 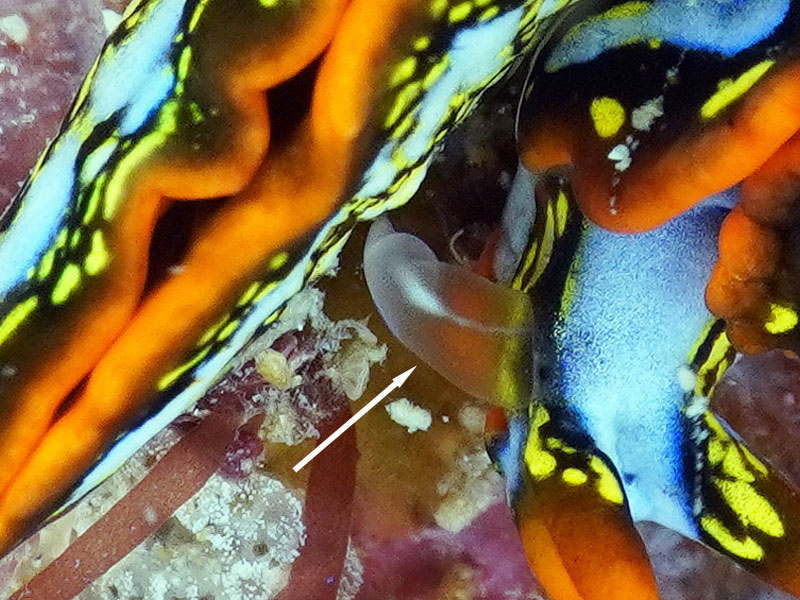 Thuridilla cf. splendens – The everted swollen penis of the right specimen is seen bulging out from under its right rhinophore and pressed up against the right parapodium of the left specimen. 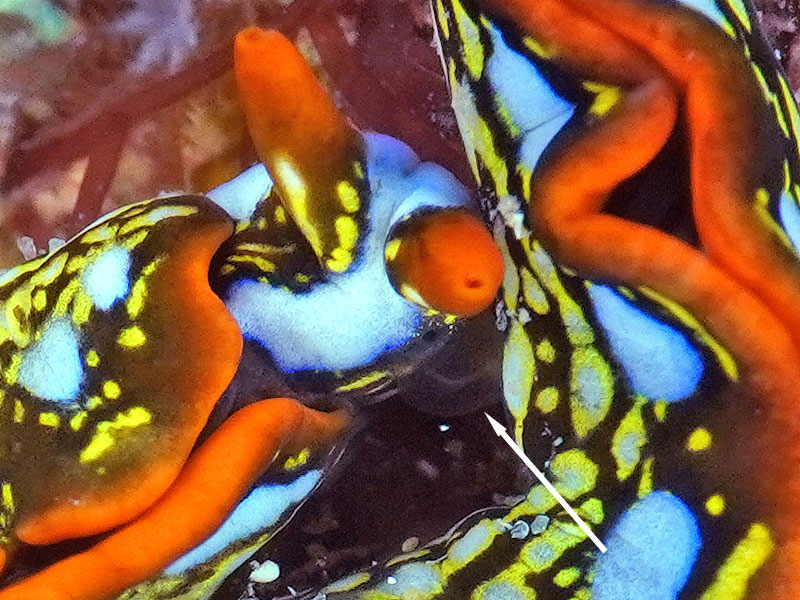 Thuridilla cf. splendens – Brought out of the shadows, the penis of the left specimen can just be seen also pressed up against the parapodium of its partner. They are not engaged in typical penis into vagina insemination but appear to be performing hypodermic insemination.

Species of Thuridilla do not possess an armed penis, that is, one with a stylus at the tip for penetrating the integument of their partner and injecting seminal fluid for fertilisation purposes (possession is also quite rare in Elysia). This absence should not be considered a reason to discount hypodermic insemination because other species of Sacoglossa, well-known and well-studied, fertilise in this manner, such as Elysia timida and Elysia maoria, and that also lack any form of stylet. Methods hypothesised for achieving this without a sharp stylet include:

1) Mechanical, via turgor pressure of the penis against an integument of unknown resilience, or

2) Enzyme attack, causing a quick localised break down of the integument allowing intromission. (For example, a polychaete worm Dinophilus cf. taeniatus is known to use needle-shaped gland cells, at the penis tip, to open the female integument by histolysis. Lange, et al, 2013 The presence of these glands would only be revealed by histological investigations.)

Remembering that sea slugs are hermaphrodites,Thuridilla are said to possess a triaulic reproductive system whereby there are three ducts that keep the various reproductive products separated but, also in Thuridilla, there are three separate openings – one for each duct. The endosperm or autosperm runs through a vas deferens to exit via the separate unarmed penis. The received ectosperm or allosperm is accepted via a separate dorsally located vagina into a bursa copulatrix. Fertilised ova are extruded via the female aperture or gonopore. Interestingly the reproductive system drawn and described of 16 species of Thuridilla by Gosliner, 1995 all show a bursa copulatrix opening exteriorly but having no internal connection such that Rudman, 2005 pondered: “One thing that does puzzle me is that all species of Thuridilla seem to have a sperm sac for receiving incoming sperm [bursa copulatrix] which has its own separate external opening, but no internal connection to the rest of the reproductive system. I wonder how sperm gets from the sac to fertilise the eggs?”

In reviewing the detailed recording of the mating of Elysia maoria described in Reid, 1964 and Elysia timida described in Schmitt, et al, 2007, there are uncanny similarities in the morphology and behaviour of these close relatives (Thuridilla being once synonymized with Elysia.).

On another occasion I photographed a Thuridilla cf. splendens encounter where a pair circle each other, penes swollen and everted but once again it is a series of images unfortunately, tantalisingly incomplete. They do however seem to be manoeuvring for “conventional” reciprocal insemination where the penis will enter the vagina, seen mid-dorsally (arrowed), just anterior to where the parapodial folds meet. 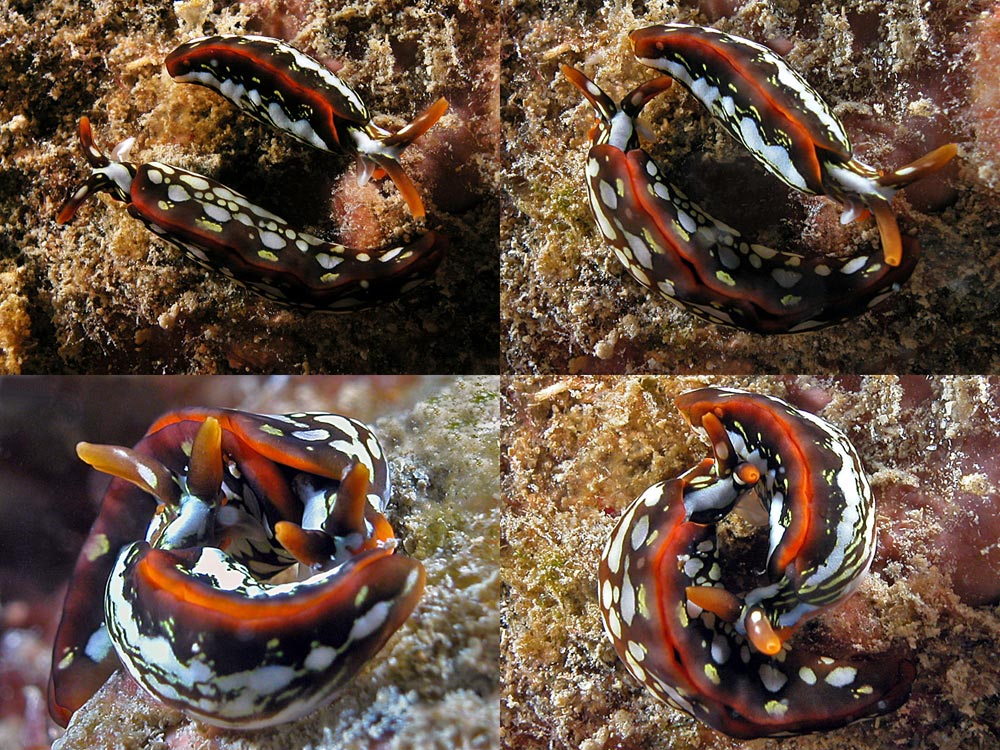 A composite image of a pair of Thuridilla cf. splendens showing four stages of their copulatory manoeuvrings. The everted swollen penes of both specimens can be easily discerned. 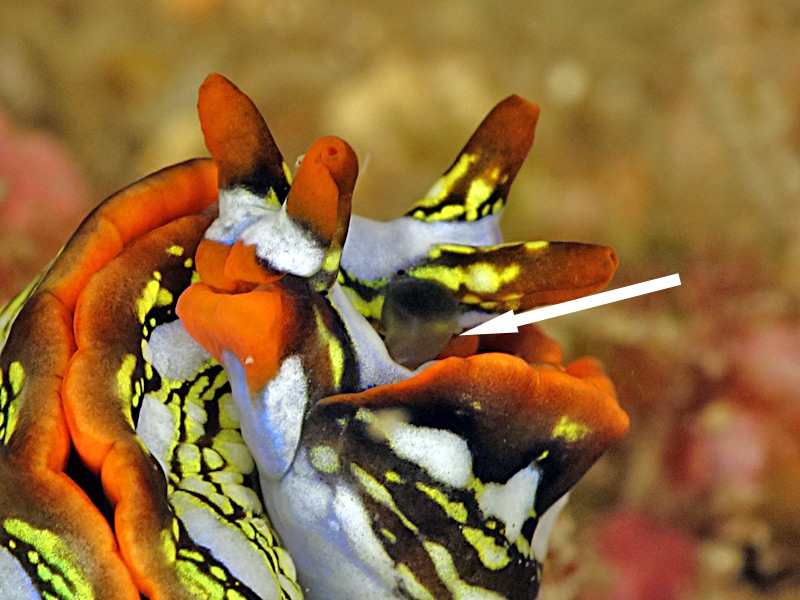 A pair of Thuridilla cf. splendens showing the left specimen with its engorged penis inserted into the dorsally located vagina of its partner. 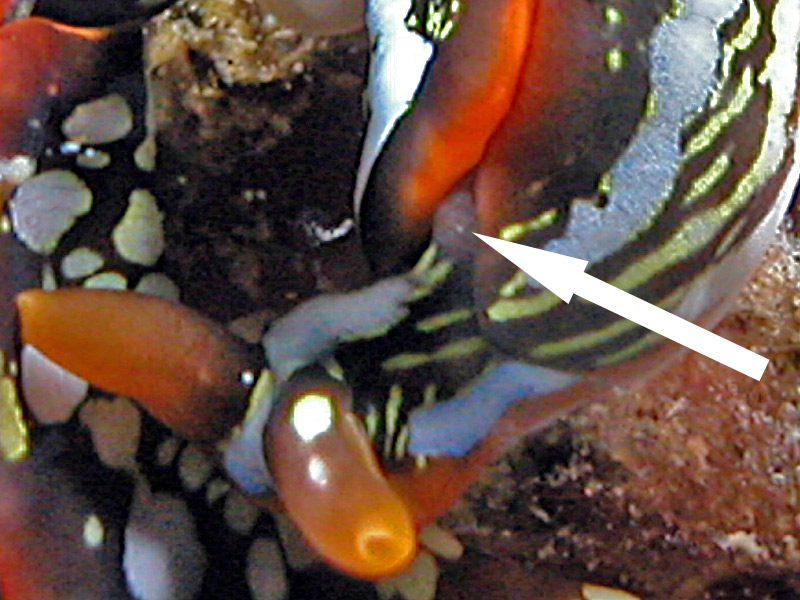 Thuridilla cf. splendens – A cropped image indicating the dorsal location of the vagina.

This last image shows what I like to think is a scar resulting from a hypodermic insemination session on the rear of the right parapodium of a specimen of Thuridilla cf. splendens – but we will never know for sure. 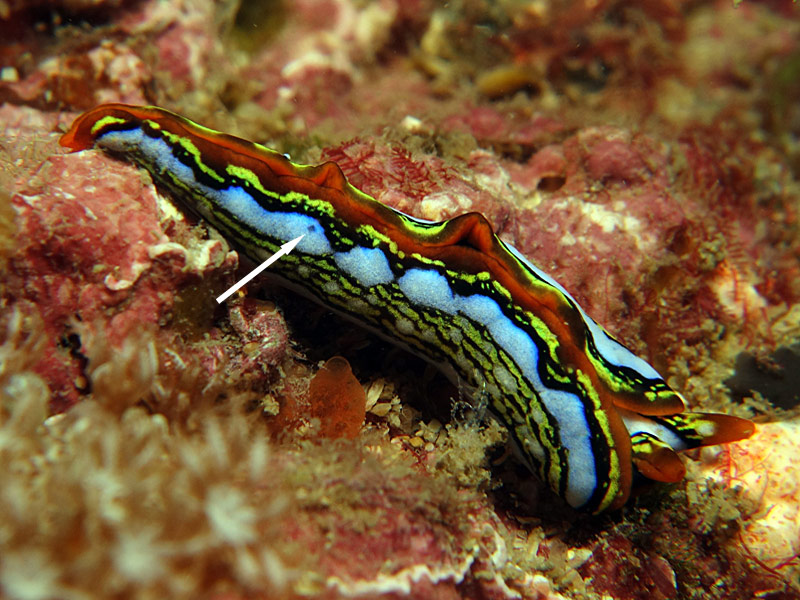 Thuridilla cf. splendens – Could this be a scar resulting from traumatic insemination by a partner?

It might be thought that a hermaphrodite, in possessing both sexes solves the problem of gender conflict by being both a donor and receiver but it appears the opposite may be the case. “Possessing two sexes, however, potentially generates conflicts of interests between mating partners since both might prefer to mate either in the male role or in the female role.” (Schmitt, Anthes & Michiels, 2007) “Conventional” reciprocal mating in hermaphrodites requires a high degree of mutual willingness and synchronisation. Hermaphrodite reproductive morphology is complex and the range of copulatory options/responses quite diverse especially when hypodermic insemination is thrown into the mix.

Observations under controlled conditions might be the only recourse to solving the mystery.

– Gosliner, T. M., (1995). The genus Thuridilla (Opisthobranchia: Elysiidae) from the tropical Indo-Pacific, with a revision of the phylogeny and systematics of the Elysiidae. Proc. Calif. Acad. Sci. 49, 1–54.