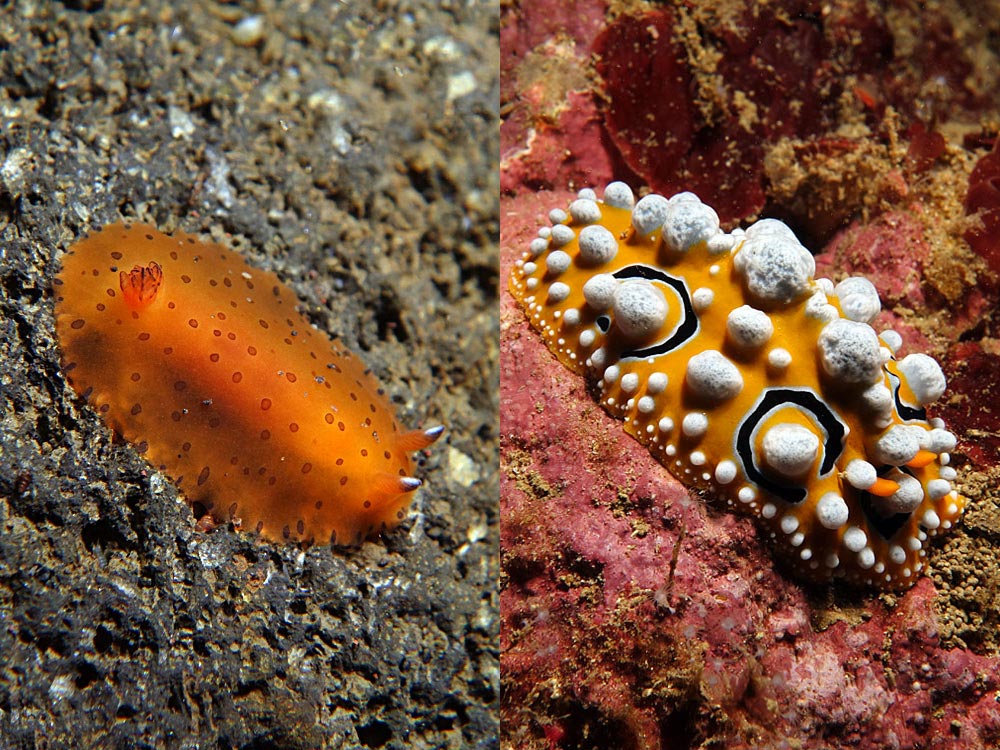 In a previous NudiNote – The Little Scraper – the radula of sea slugs was discussed. Mention was also made of those sea slugs that do not possess a radula. Among the dorid nudibranchs in particular, the radula has only been lost once along their evolutionary path. These radula-less dorids are grouped together in the Porostomata. (Some taxonomists prefer to use the Superfamily rank of Phyllidioidea instead for this group.) The two major families in this group exhibit a remarkable difference in external appearance that has produced much debate about their relationship.

For those who are interested, the Porostomata contains three families:

These are the suctorial feeders among the nudibranchs. They all lack a radula and instead have developed different anatomical arrangements in the foregut enabling them to feed upon sponges in a suctorial manner. They secrete digestive fluids directly onto their prey, from specialised glands, that partially breakdown the prey tissue externally into a liquid state so that it may be sucked up using their modified buccal pump.

The characteristics prompting the original (and insightful) thoughts behind combining them all in Porostomata, by the 19th century taxonomist Bergh, were the common lack of a radula and labial cuticle (jaws) for feeding and the reduction of the mouth to a pore. Since that time the grouping has been plagued by controversy and a number of arguments have been put forward asserting that the loss of the radula in Phyllidiidae and Dendrodorididae is an unimportant common trait considering their strikingly different external presentations and further suggested that it is an example of convergent evolution. 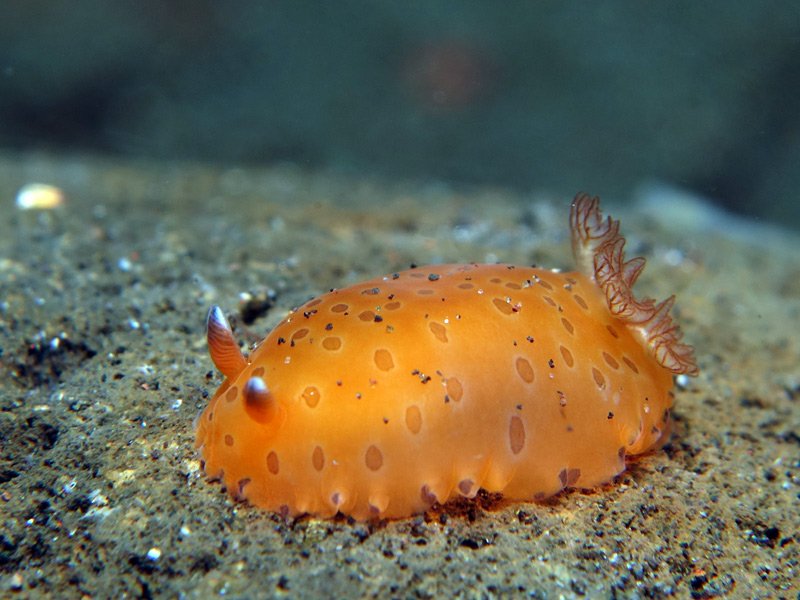 A typical Dendrorididae species – Dendrodoris guttata – looking not unlike a typical cryptobranch nudibranch with its large posterior and retractable gill except that it lacks the scraping radula and feeds by a suctorial method. 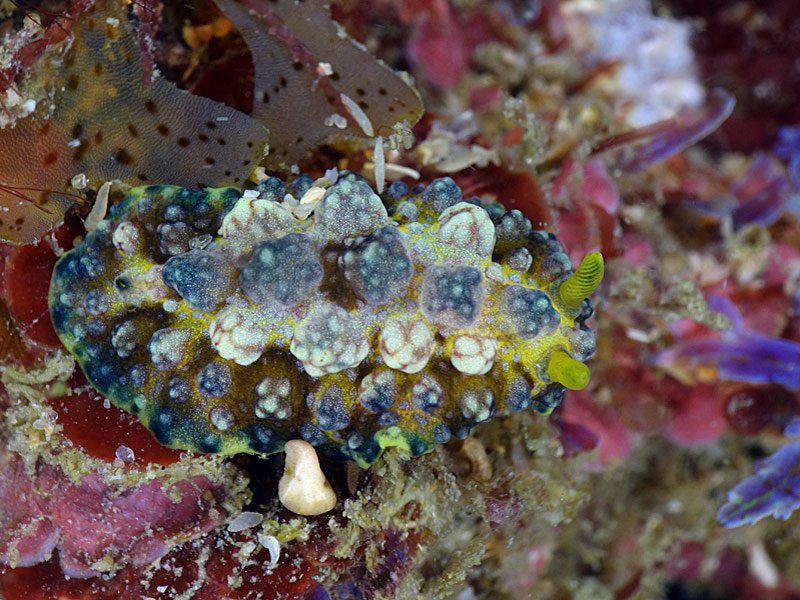 A typical Phyllidiidae species – Phyllidiopsis cardinalis – looks nothing like a cryptobranch nudibranch. It too lacks the radula and feeds suctorially. However the mantle and large pustules are imbedded with spicules making the body rigid and stiff. Note there is no dorsal gill but the anus is visible on the dorsal surface posteriorly (extreme left in image). This is surrounded by a cavity under the mantle surface and is believed to be homologous with the gill cavity of the cryptobranchs and therefore an evolutionary remnant.

Valdés & Gosliner (1999) and Valdés (2003) have concluded through cladistics (phylogenetic systematics) and molecular sequencing that Bergh was correct in proposing that the families are closely related. Their investigations have shown that categorising these three families under Porostomata creates a monophyletic group, that is, a group that contains species with a common ancestor and also contains all the living descendants of that ancestor. This also shows that the loss of the radula has happened only once in the evolution of the dorid nudibranchs. Additionally the loss of the dorsal gill and development of ventral leaflets for respiration also only happened once in the dorid nudibranchs, in the Phyllidiidae, and occurred after the loss of the radula.

Molecular sequencing aside, the argument that the external morphological differences are so great (in the Phyllidiidae they are unique across the dorids) as to warrant separation does not hold up as valid because as Valdés (2003) points out: “The utilization of modern phylogenetic systematics has shown that remarkable morphological differences are meaningless unless they are shared by other taxa. In the case of phyllidiid nudibranchs, the presence of ventral respiratory leaves is unique to this group and therefore uninformative for phylogenetic reconstruction under maximum parsimony.” In other words just because the Phyllidiidae have ventral secondary gill leaflets under the mantle rather than the circle of dorsal gills of the other Porostomata families, the Dendrodorididae and Mandeliidae, does not mean they are not related through a common ancestor. 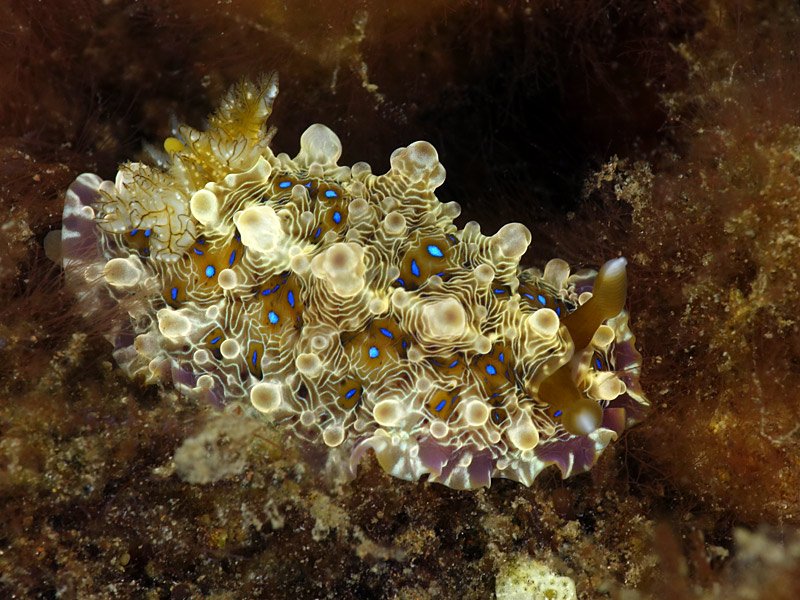 Dendrodoris denisoni has large tubercles on the dorsum but these are soft and flexible and so to is the body as neither contain spicules. The edge of the mantle is thin and undulating. Note the large bushy gill towards the posterior end that surrounds the anus and can withdraw into a pocket beneath the mantle.

Returning to the remarkable external differences between species of the two families Dendrodorididae and Phyllidiidae, it is easy to see how the spicule containing pustules covering the dorsum and the lack of the dorsal gill in the Phyllidiidae mark them as different. The development of ventral respiratory leaflets in the hyponotal groove (the groove formed at the junction of the body wall and the ventral surface of the mantle) by the Phyllidiidae is unique within the dorid nudibranchs. 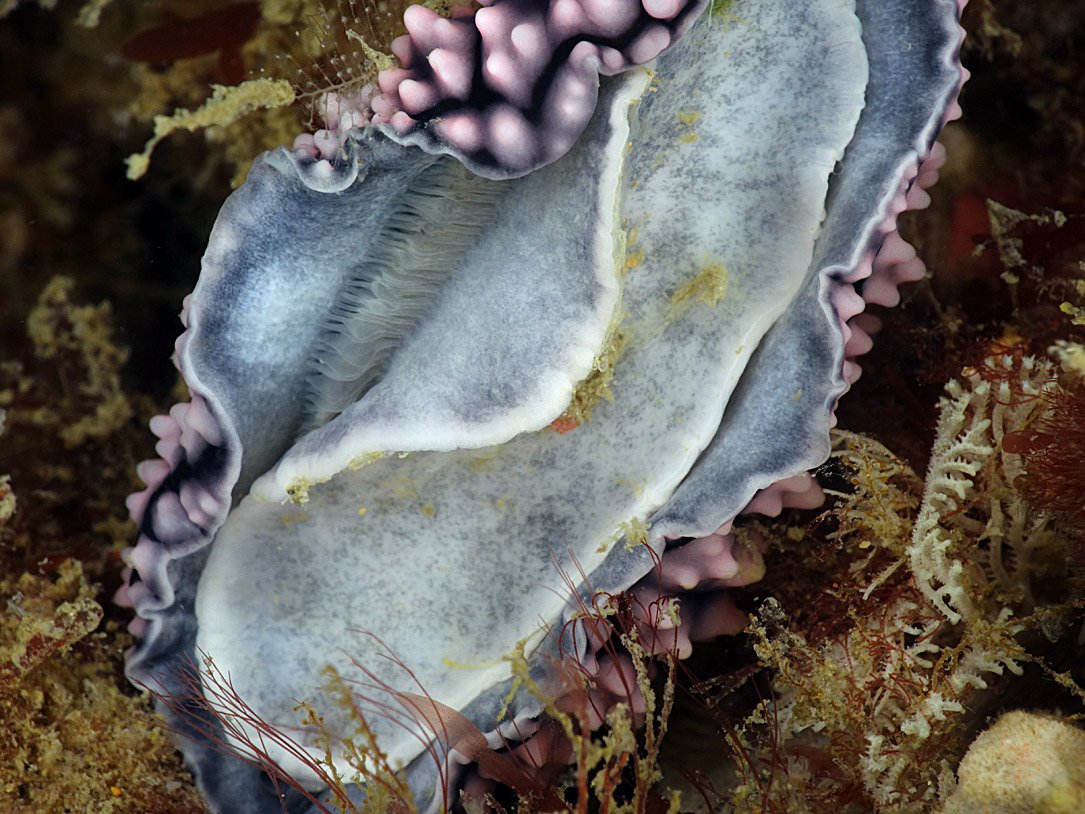 The ventral surface of Phyllidia pustulosa showing the secondary gill leaflets located in the hyponotal groove as possessed by all of the Phyllidiidae.

Nudibranchs with gills do not rely solely upon the gill for gaseous exchange. A fair proportion also occurs across their thin body wall as well, and is referred to as cutaneous respiration. It has been shown that the body wall beneath the mantle is central to this process. This area is thin-skinned and is believed to thus readily facilitate gaseous exchange between the surrounding sea water on the one side and the “blood” filled pallial and pedal sinuses located on the other making it the ideal position to capitalise upon for development of these secondary respiratory leaflets. Depending upon species and size there may be up to 150 of these respiratory leaflets located around the entire periphery of the animal interrupted only by the mouth, genital pores on the right side and the anus in those species where it opens ventrally. 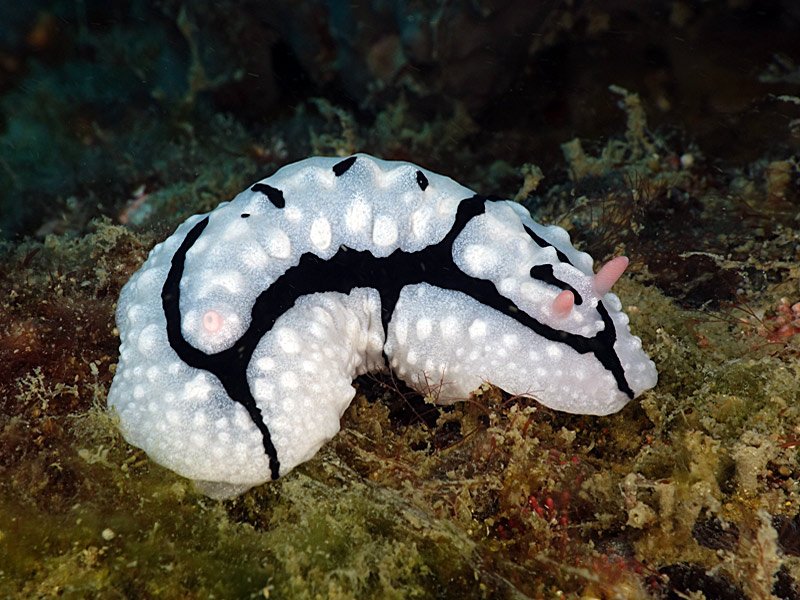 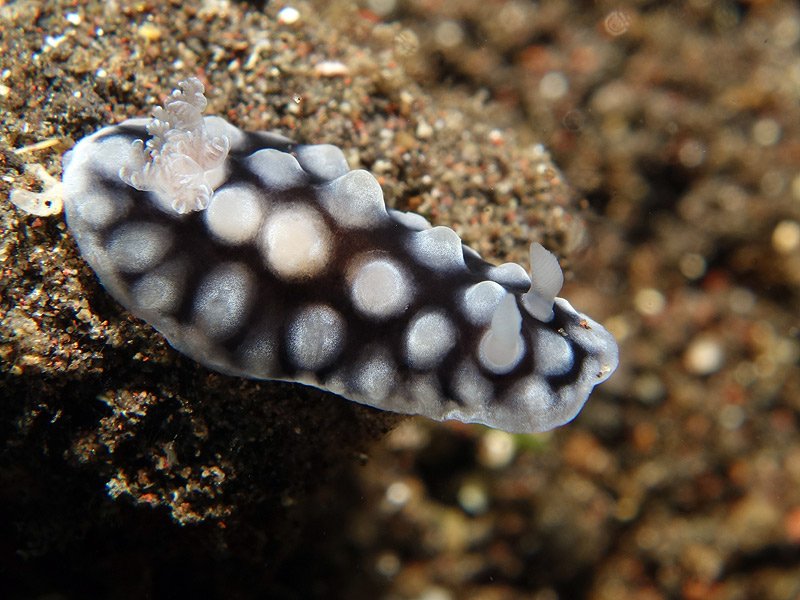 Dendrodoris carbunculosa can be mistaken for a phyllidiid, especially a juvenile like this example, but the dorsal gill, when displayed like this, is a give away. 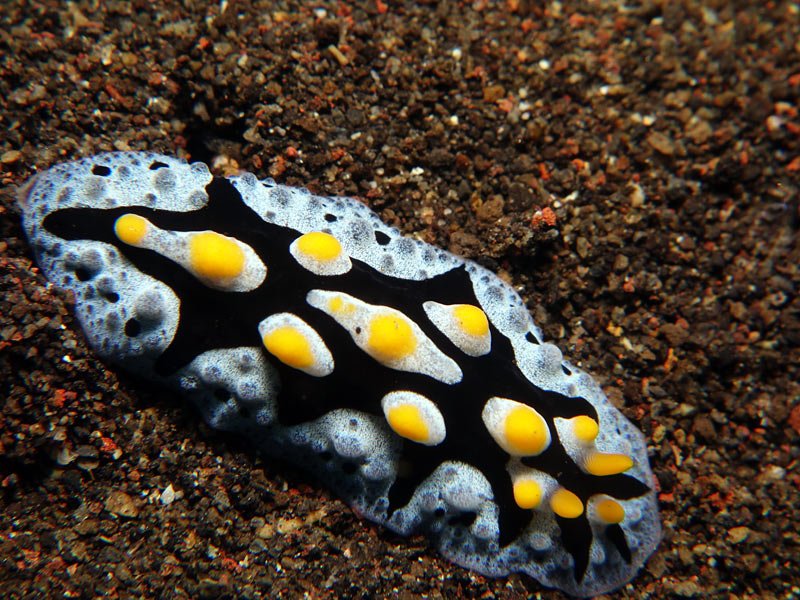 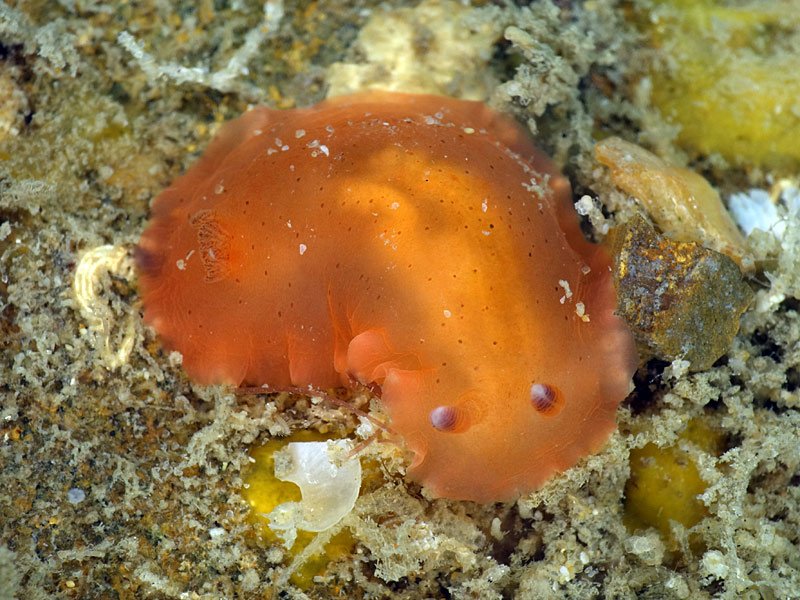 Dendrodoris fumata demonstrating how the gill may be withdrawn into the pocket below the mantle. 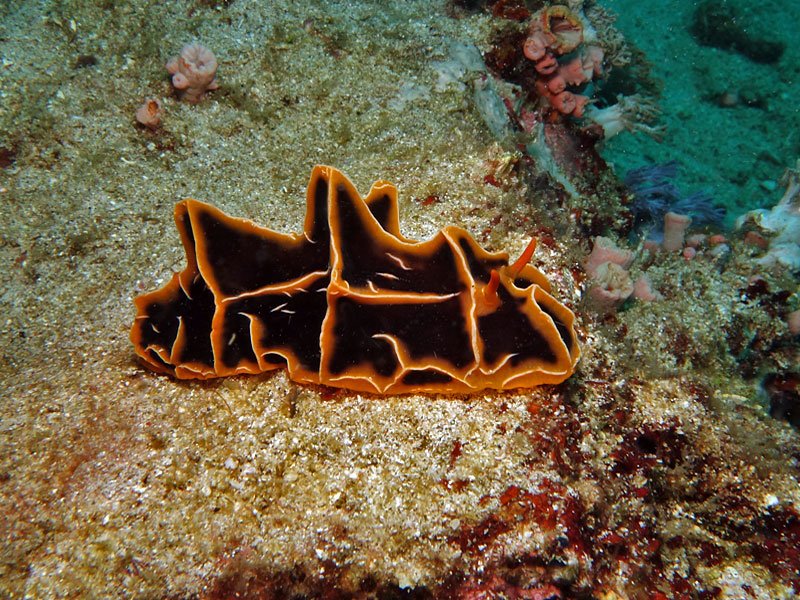 Not all the Phyllidiidae species bear stiff pustules. Reticulidia halgerda above, for example has a smooth dorsum but it is covered in distinctive intersecting ridges. 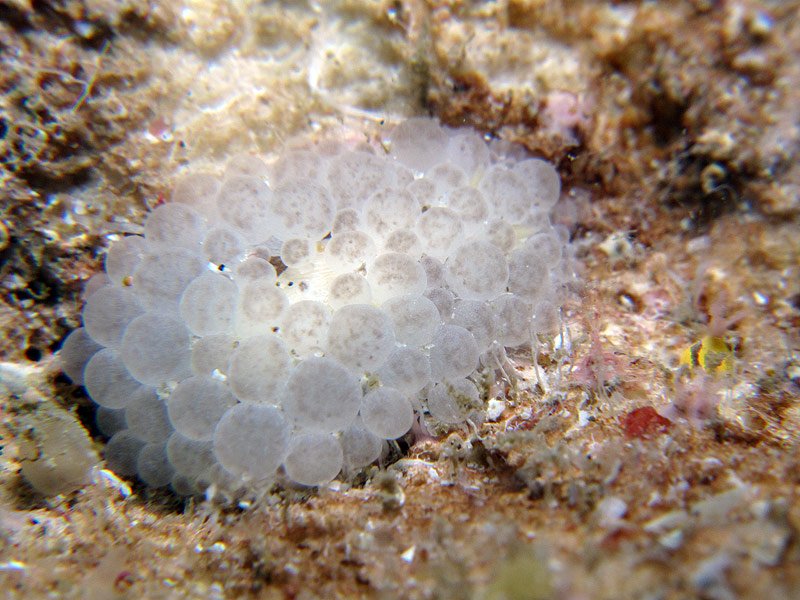 Young, D. K. (1969). The functional morphology of the feeding apparatus of some Indo-west-Pacific
dorid nudibranchs. Malacologia, 9, 421–445.

Potts, G. W. (1981). The anatomy of respiratory structures in the dorid nudibranchs, Onchidoris bilamellata and Archidoris pseudoargus, with details of the epidermal glands. Journal of the Marine Biological Association of the United Kingdom, 61, 959-982.

Valdés, A. (2002). A phylogenetic analysis and systematic revision of the cryptobranch dorids (Mollusca, Nudibranchia, Anthobranchia). Zoological Journal of the Linnean Society, 136, 535–636