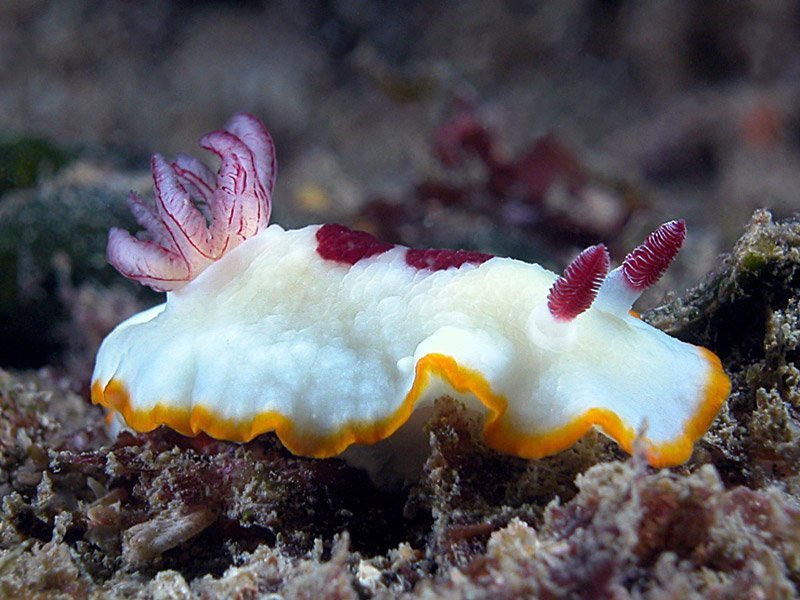 Goniobranchus splendidus is a common and conspicuous species of nudibranch, though endemic to the east coast of Australia, from southern New South Wales to central Queensland. It exhibits variation in presentation, some of those attributed and limited to specific regions within its range. 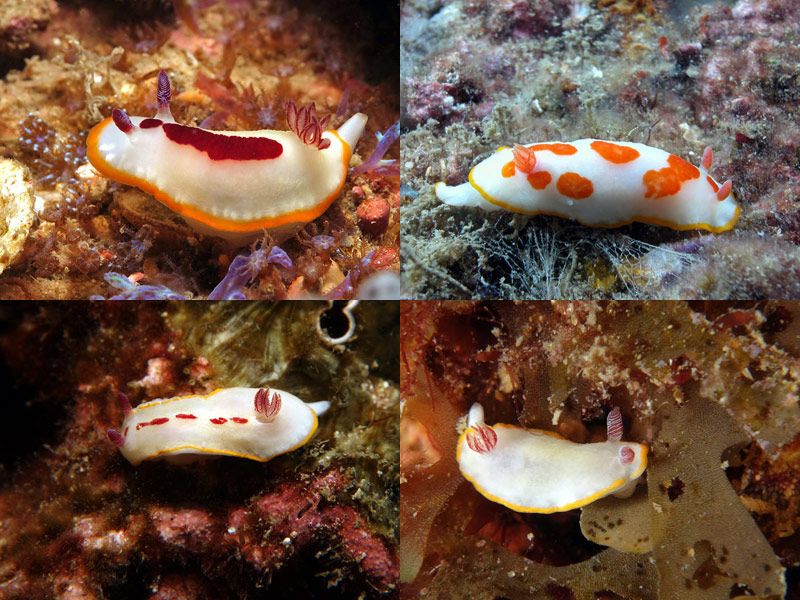 Composite image of four different presentations of Goniobranchus splendidus.
Upper left: A specimen with port-wine colouration to the dorsal blotches. The colour of the rhinophores and gills match the port-wine of the dorsum. The mantle margin is tending to orange. The tails carries an orange tip.
Upper right: This specimen has dorsal blotches of an orange hue as are the rhinophores and gills. The mantle margin is yellow. The tail carries a yellow tip.
Lower left: The dorsal markings of this specimen present as a broken medial line, port-wine in colour. The tail carries a translucent colourless tip.
Lower right: Just to confuse us further here is a specimen without any dorsal blotches at all. The rhinophores and gills are port-wine in colour and the mantle margin is bright yellow. The tail carries a translucent colourless tip.

Variation exists in the size and arrangement of colour on the white dorsum. That colour ranges from port-wine to light orange or to being non-existent. The colour may be arranged as regular spots, large blotches or a single patch of varying size and shape. There is no one arrangement that could be considered typical. In its southern range Goniobranchus splendidus displays a more spotted arrangement of mantle markings compared to the large single or several smaller blotches of those sighted further north. At the extreme northern extent of its range though, the blotches again revert to spots.The colour to the rhinophores and gills may or may not match that of the dorsal blotches/spots. The coloured marginal band to the mantle can also vary from orange to bright yellow and this band may or may not extend to the tail portion of the foot and in varying extent when it does. 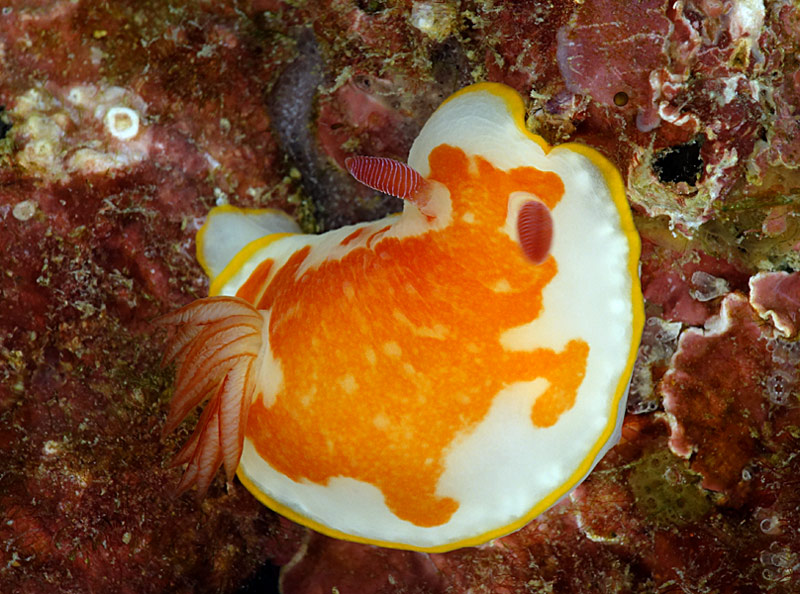 Goniobranchus splendidus – This example has most of the dorsum covered in light blotchy orange. The rhinophores are port-wine in colour with the gills a dark orange. The mantle edge is bright yellow and the tail too carries an edge of bright yellow. 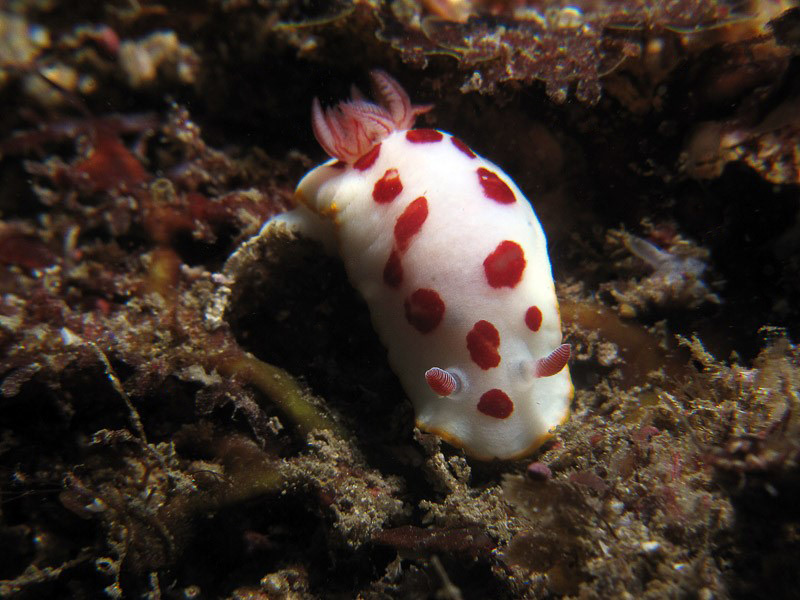 Goniobranchus splendidus – This specimen was photographed from Nelson Bay, in central New South Wales and shows the “regional pattern” of smaller, almost regular sized spots on the dorsum. (Image by kind courtesy of Terry Farr.) 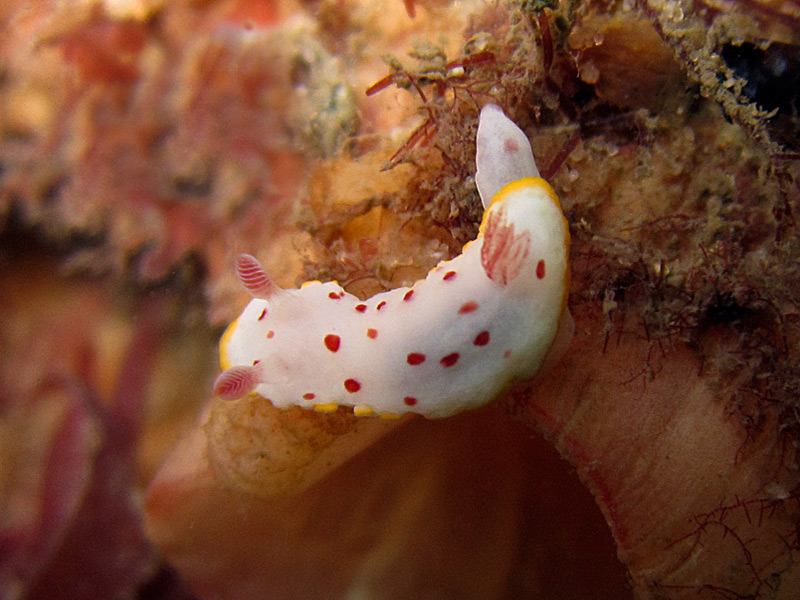 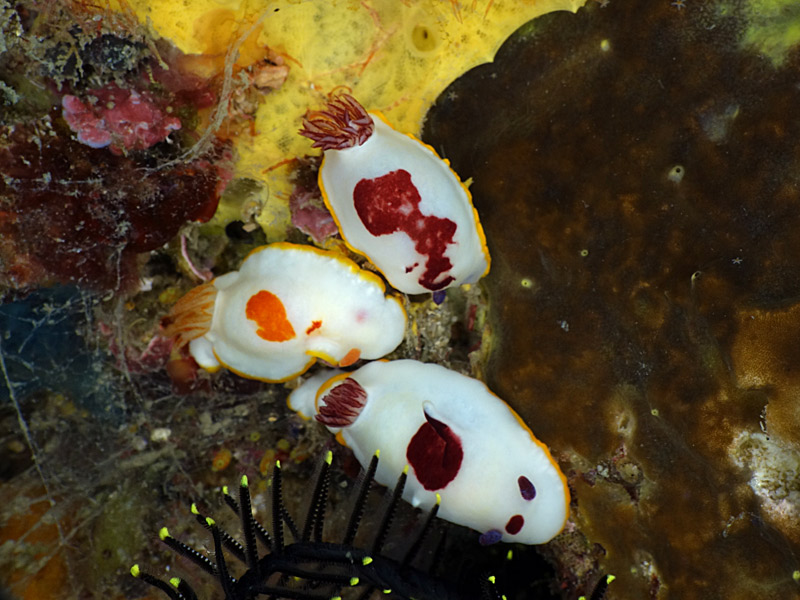 A Splendid Trio – Three specimens of Goniobranchus splendidus feeding together. Top and bottom are port-wine coloured specimens separated by an orange blotched example.

Identification can sometimes be further confused by the presence of several other species in the range of distribution that also possess an essentially white dorsum with red/orange spots. Differentiation can normally be achieved by the combination of colour/s of the band/s on the mantle margin and the colour of gills and rhinophores. These similarities in appearance are attributed to a defensive measure called aposematic colouration whereby a group of animals display similar colour and pattern in order to spread the load of warning (“teaching”) potential predators, mainly fish, that they possess distasteful/poisonous mantle glands.

Note: All of the images shown here were taken in southern Queensland except for two from central New South Wales, as captioned.