“WELL, THERE’S SOMETHING YOU DON’T SEE EVERY DAY.” – Tenellia sibogae 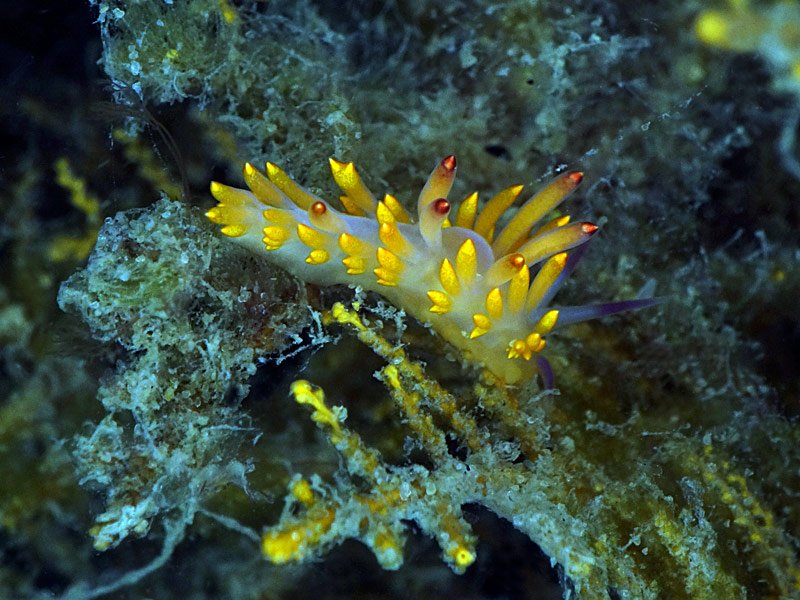 Tenellia sibogae (or Trinchesia sibogae, depending on whose taxonomy you follow) is usually sighted upon its food – arborescent hydroids of the Sertularella genus (usually identified as Sertularella diaphanous or Sertularella quadridens). If you are searching for sea slugs and spot this characteristic looking hydroid it is definitely worth your time to search through it for this aeolid nudibranch. You might find one, or even several, consuming the hydroid’s polyps as it crawls out along the branches and branchlets. 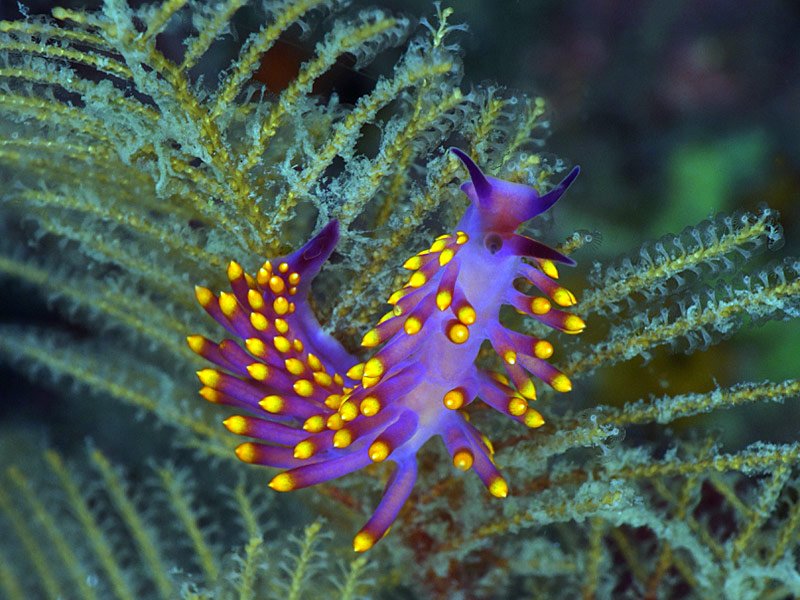 Sertularella can be a large and bushy colony or merely growing as just a struggling few stems. The colour of stems and branches is orange to golden brown with the expanded polyps a translucent white.

Tenellia sibogae is consistently found with a particular colour arrangement; body: pale lilac to dark purple, rhinophores and oral tentacles: much darker than the body colour, cerata: most usually similar in colour to the body but with a dark subapical band ranging from a deep purple to almost a deep maroon then tipped with golden yellow. Sometimes, but not always, the outermost, smaller cerata are golden yellow, however close examination shows that even on those the ceratal base is still purple. 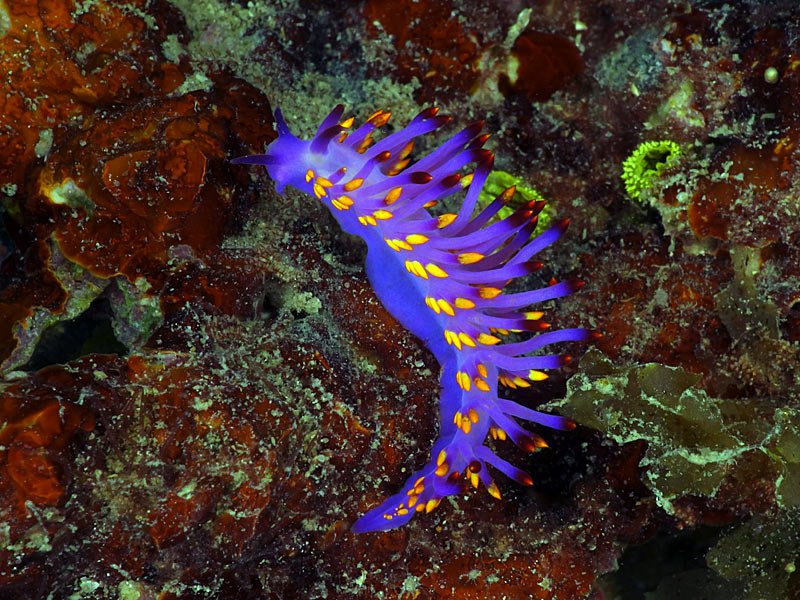 Tenellia sibogae – this specimen exhibits another common presentation where the outermost cerata are golden yellow in colour. However it can be seen that the basal third is still the purple of the other cerata, that is, they are not entirely yellow.

Only on two occasions have I recorded anything markedly different to that presentation and I had to convince myself that I was seeing the same species. As Bill Murray, playing Dr. Peter Venkman in Ghostbusters, said: “Well, there’s something you don’t see every day. ” In the first instance, all the cerata were completely golden yellow in colour with just a few bearing a reddish tip (see Featured Image at top). The second time, all of the cerata were entirely golden yellow their full length (See image directly below). Although the specimens were not large it could not be argued that it is merely a juvenile phase as I have many images of juveniles presenting typically. 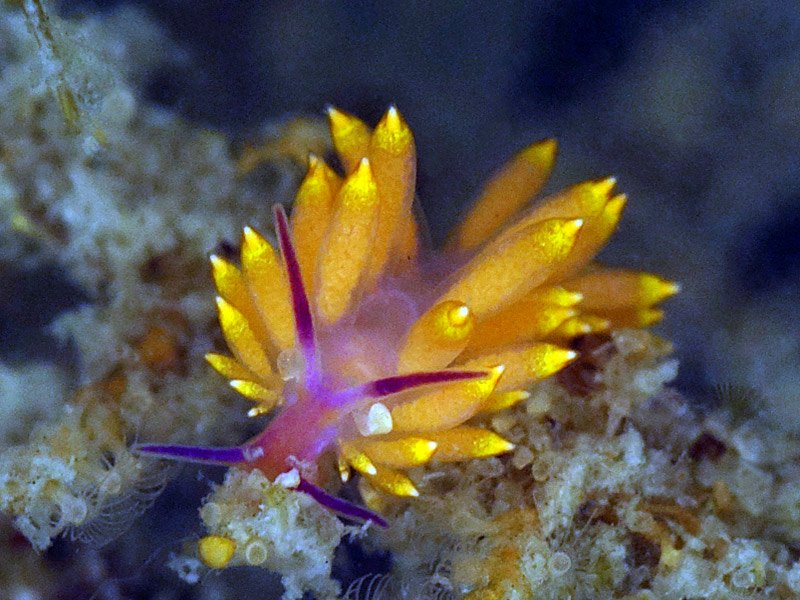 Tenellia sibogae – This specimen exhibits cerata that are all golden yellow the entire length. 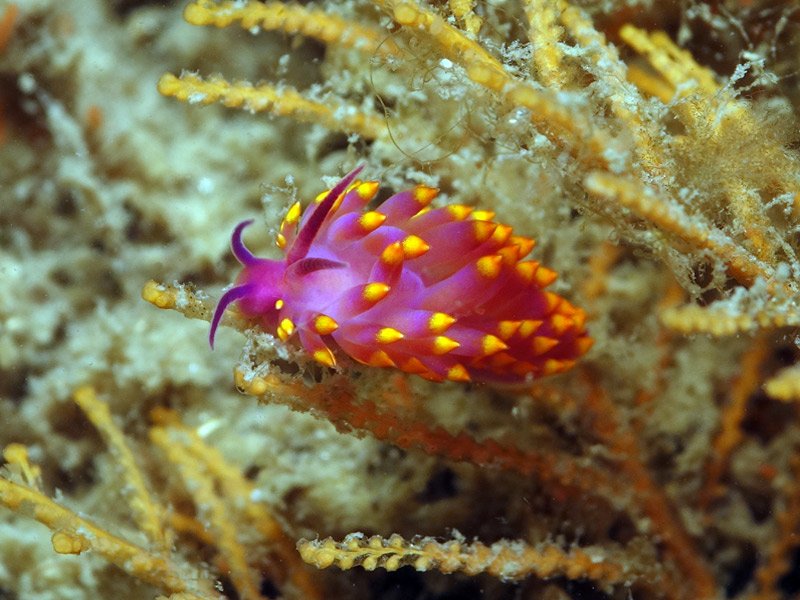 Tenellia sibogae – A juvenile specimen of the same size as the atypical specimens showing that this difference is not age/development related.

Search as I may, I have only been able to find two other images depicting this atypical colouration, a photo by David & Leanne Atkinson (column two, row two, p380, Coleman 2008) and strangely enough, when I went to the original illustration accompanying the description by the taxonomist Bergh in 1905 of this species (Hervia sibogae at the time). Given the colours that we see 99.99% of the time I was surprised that something approaching the rare presentation mentioned above was a part of the original description. In that somewhat fuzzy illustration we can see that many of the cerata are golden yellow but with some bearing a purplish outline. It certainly looks closer to the atypical than the typical.

The illustration accompanying the original description of this species by Bergh published in 1905 – Die Opisthobranchiata der Siboga-expedition. Siboga-Expeditie.
(“Image from the Biodiversity Heritage Library. Contributed by Smithsonian Libraries. www.biodiversitylibrary.org”)