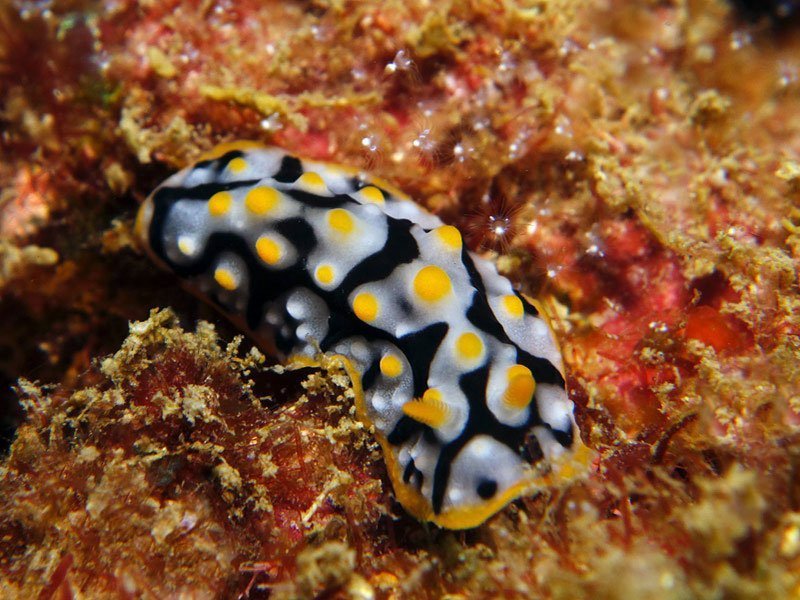 Trying to decide to which genus a phyllidiid nudibranch belongs from a photo can be a task of some difficulty. There are some external features that can be used, but these are not always easily observed. Here is a rough external guide boiled down to the basics:

Using the above diagnosis Reticulidia and Ceratophyllidia do not present a problem by each having different dorsum presentations from all the others.

Also, separating Phyllidia and Phyllidiella can be achieved by the colour of the rhinophores. The other characteristic that can be helpful here is that Phyllidia most usually has yellow tipped tubercles or failing that a yellow/orange body colour.

However, the real problem arises in separating the genus Phyllidiopsis from both Phyllidia and Phyllidiella. Quite a number of the Phyllidiiopsis have longitudinal ridges without tubercles and also a bluish colouration. The best characteristic is the nature of the oral tentacles that unfortunately, although considered an external feature, are never observable in photos of the animal unless it is turned over. Failing that, it becomes a process of looking at the combination of rhinophore colour, the arrangement and type of tubercles together with the pattern of lines on the dorsum by which point you will most likely even have arrived at a species level identification. If looking at the ventral surface sometimes the colour of various parts can be of assistance in species delineation with certain species also possessing a dark longitudinal line on the sole of the foot.

The old proverb “familiarity breeds contempt” need not be the case in sorting out these “lumpy” nudibranchs. Yes, at first glance, they can all look boringly the same but spending the time to distinguish their nuances can also be a rewarding task. Familiarity can in fact bring understanding and appreciation.