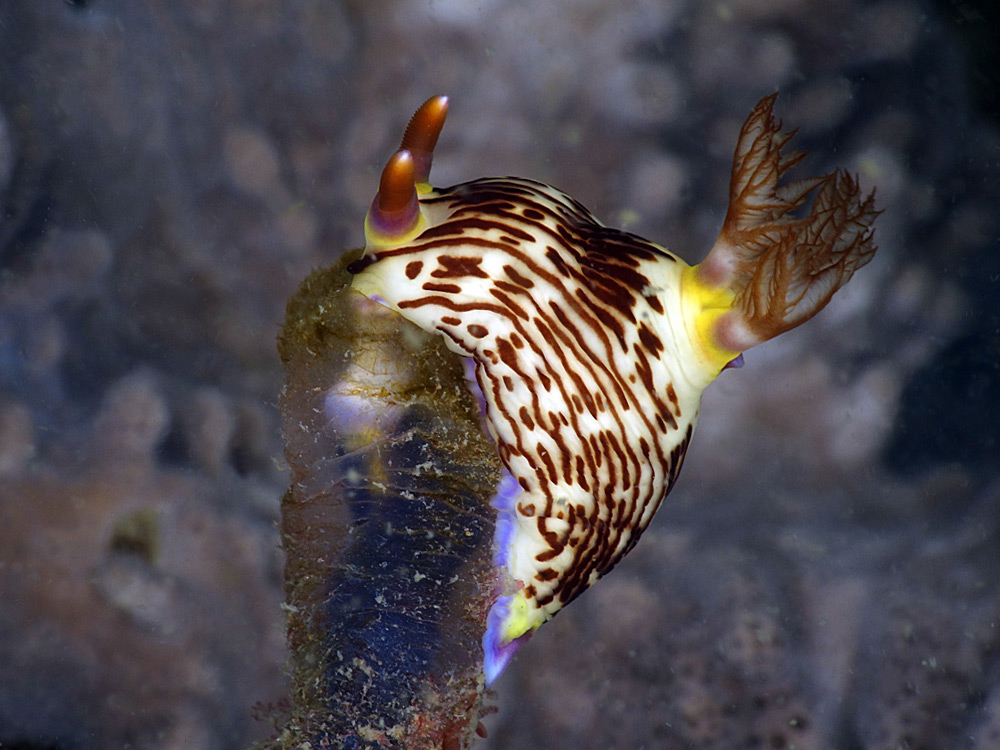 Sea Slugs that graze upon Ascidians, Bryozoans and Entoprocts

It’s been mentioned before that the feeding preferences of sea slugs, across the entire group, encompass an extremely diverse range of food types, but conversely, each species usually has an extremely specific diet. In this NudiNote, three other phyla from the Animal Kingdom, that sea slugs prey upon, are discussed. Sponges and cnidarians, such as corals, hydroids and anemones, are well known colonial animals that sea slugs consume and those food sources have been covered in previous NudiNotes. However, there are other, not so well-known, colonial animals that certain sea slugs feed upon. These are the ascidians, bryozoans and entoprocts. (Although there are some ascidian species eaten by sea slugs that are solitary forms.)

Ascidians
Ascidians, belying appearance, belong to the chordates (phylum Chordata) albeit a primitive form compared to the vertebrates that also comprise the phylum. In the adult form they are simple filter-feeders with an outer “tunic” attached to the substrate and may be solitary or colonial (compound) in presentation. It is the brief, non-feeding larval stage that provides their affinity to the chordates with a notochord in the tail that is lost, as such, when it settles, attaches and metamorphoses into the adult.

Of the Nudibranchia it is among a couple of the phanerobranch families (those that lack a gill pocket) that the ascidian predators are found e.g. the Nembrotha of the Polyceridae family and also some of the Goniodoris and Okenia of the Goniodorididae family. 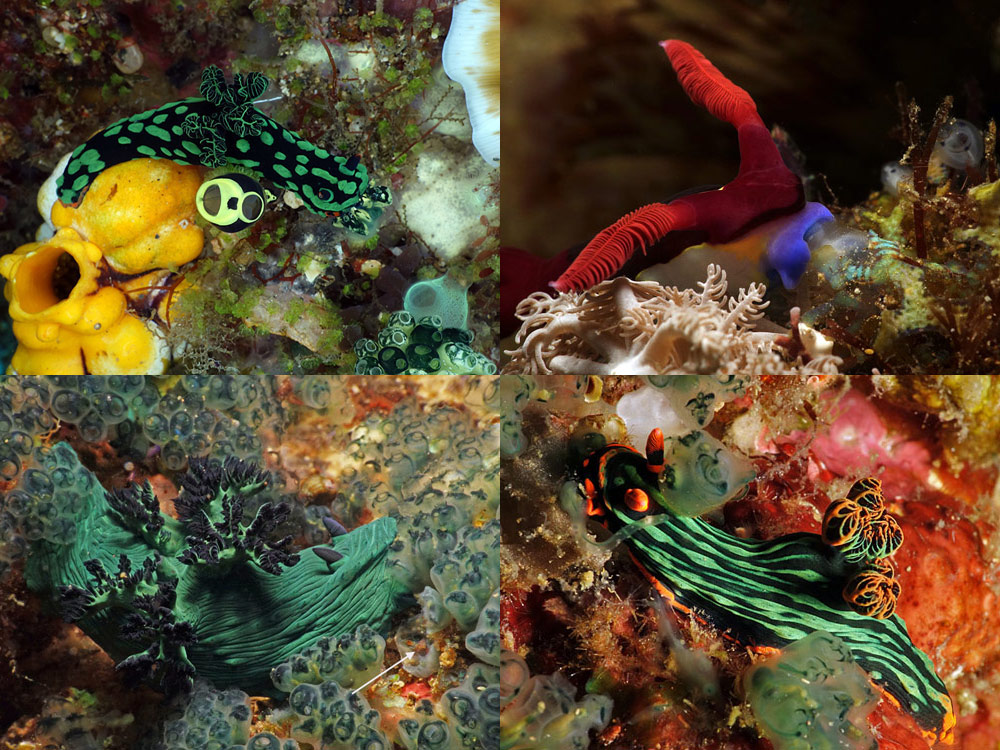 A composite image of four different Nembrotha species eating ascidians.
Upper left: Nembrotha cristata homing in on its favoured ascidian. There are at least five other ascidian species in the image.
Upper right: A close-up of Nembrotha chamblaini as it ingests ascidians.
Lower left: Ploughing through a field of the colonial ascidians Sigillina signifier, the large phanerobranch Nembrotha milleri consumes the animals whole rather than just finessing the inner organs. Some torn apart, half-eaten ascidians with internal organs exposed can be seen just to right of the nudibranch’s head (arrowed).
Lower right: Nembrotha kubaryana is working through a field of ascidians and picking them off as it goes.

Some of the larger Nembrotha appear to graze through a field of ascidians consuming the animals entirely e.g. the large Nembrotha milleri, while others e.g. Nembrotha lineolata, prefer to climb up the ascidian in order to plunge their long feeding tube down through the ascidian’s open siphon and consume the inner organs. The larger ascidians with a tough outer layer or “tunic” are drilled into by some species of Nembrotha to gain access to the inner tissues. Certain species of Goniodoris can be found situated in craters they have eaten out of compound ascidians, often with their egg ribbon laid around the edge of the crater.

Nembrotha lineolata a phanerobranch of the Polyceridae family, has crawled up the outer tunic of an ascidian and inserted its feeding tube (visible through the tunic wall) in through a siphon to feed on the internal organs of its prey. 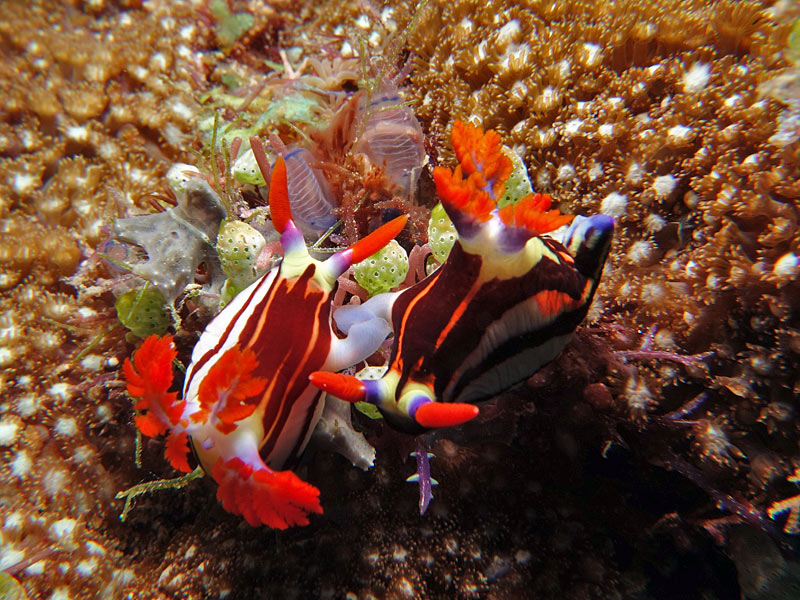 Multitasking
A pair of Nembrotha cf. purpureolineata continue to feed on ascidians as they mate.

Some of the side-gilled slugs too, e.g. those of the Pleurobranchus genus, prey on ascidians, most usually being active and feeding nocturnally. 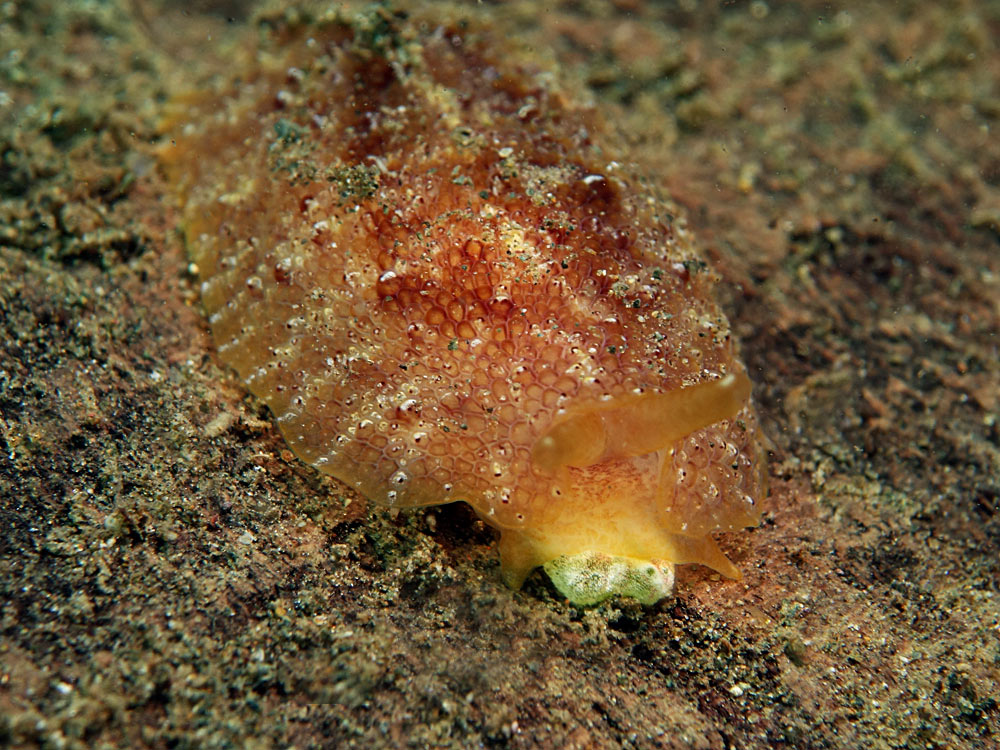 Pleurobranchus albiguttatus enveloping and consuming a colony of ascidians it has chanced upon. 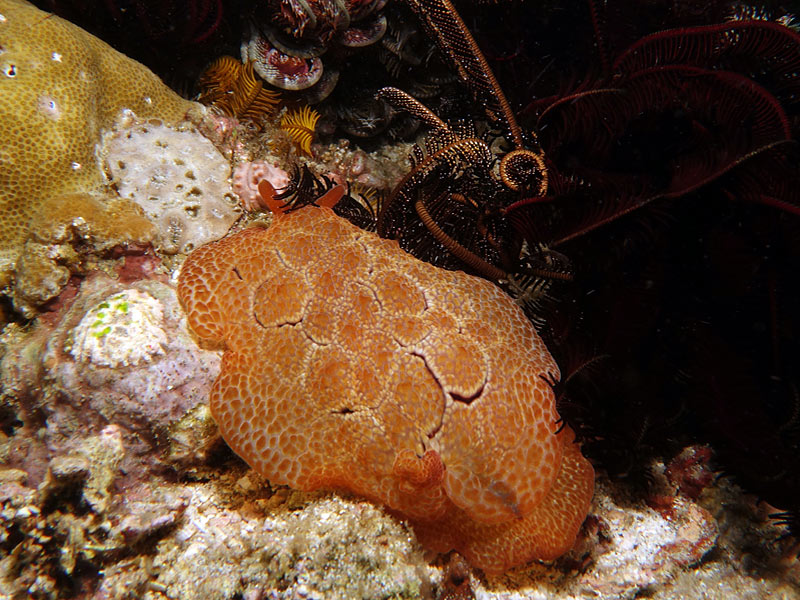 Bryozoans
Bryozoans are minute colonial animals. Most are sessile, highly variable in shape, living attached to the substrate as encrusting sheets or standing more erect not unlike coral growths or algae (arborescent) and feeding via a tentacled lophophore protruded from their surrounding exoskeleton. 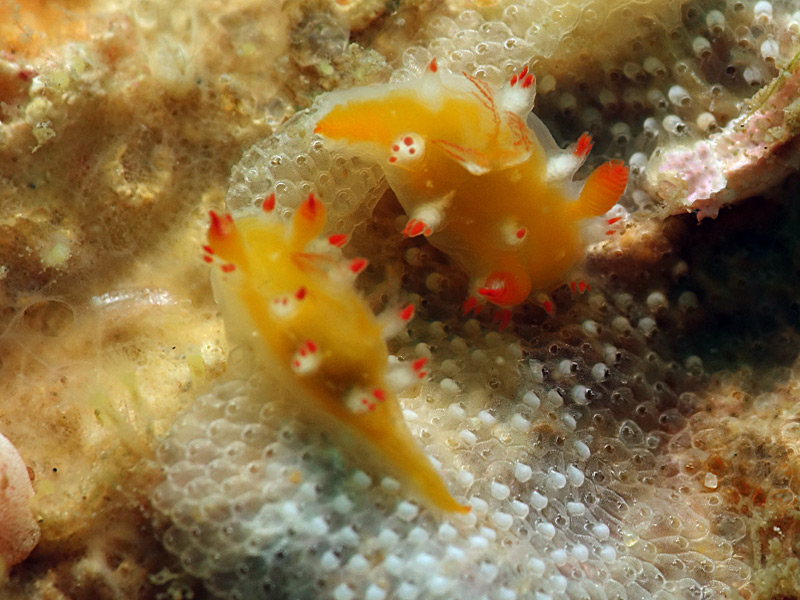 A pair of juvenile Kaloplocamus acutus of the Polyceridae family have found encrusting bryozoans to feed upon on the underside of an old coral plate.

The Bryozoa, both encrusting and arborescent forms, are a major food source for phanerobranch nudibranchs. Many, if not the greater proportion of the phanerobranchs are bryozoan predators notably the Polyceridae family (e.g. Polycera, Tambja, Plocamopherus, Kaloplocamus, Thecacera, Crimora to name a few of the more well-known genera), Goniodorididae family (Goniodoris, Goniodoridella, Okenia, withTrapania being a significant exception) and Onchidorididae family (Diaphorodoris, Knoutsodonta and Onchidoris). The presence of the nudibranch on the bryozoan, especially the broad encrusting type, is often noticed by the change in colour of the predated portion where the living animals have been removed from their exoskeleton, not unlike the polyps of a calcareous coral. Some nudibranchs are translucent such that the underlying features of the encrusting bryozoans show through clearly, thus providing a form of camouflage for the predator as it feeds. The presence of these species may be often betrayed by the circular egg mass they lay upon the bryozoan colony nearby. Previously, many of the species that feed on encrusting bryozoans that grow on algal fronds were thought to be feeding on the algae as they were always found crawling over it. 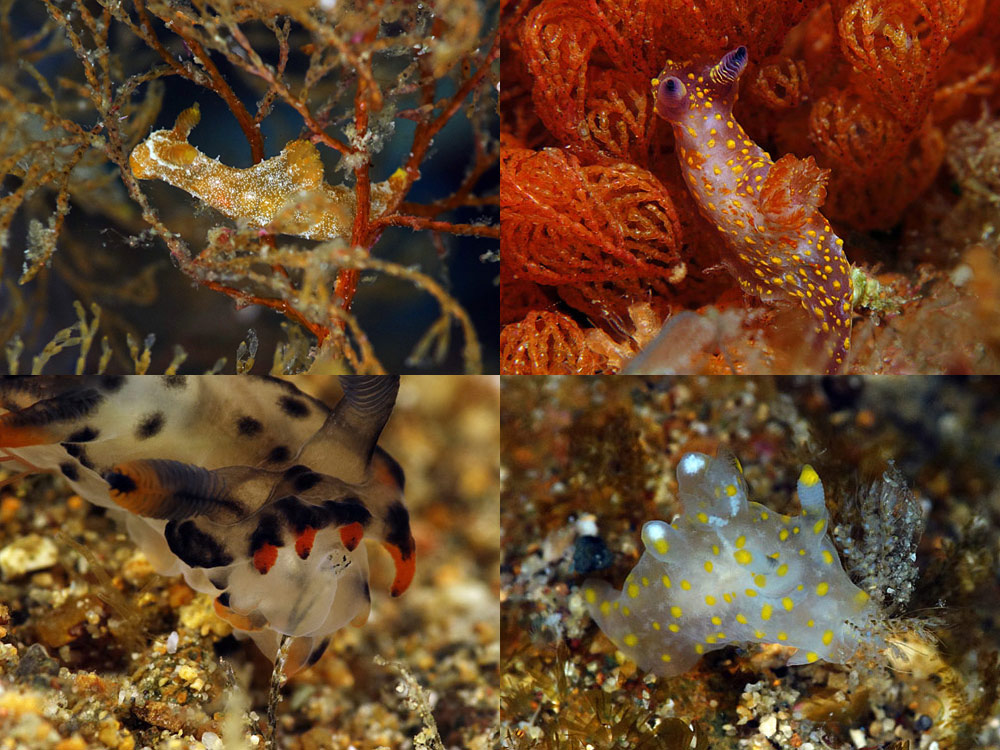 Bryozoans come in two basic forms arborescent and encrusting. Here is a composite image of four polycerids preying on the arborescent types.
Upper left: A Polycera sp. inside a tangled bryozoan colony, plucking off the zooids.
Upper right: Working its way into the dense growth of arborescent bryozoan colonies, the chain-like Paracribricellina cribraria, this temperate to cold water species of Polyceridae, Polycera janjukia won’t go hungry for quite some time.
Lower left: A Polycera sp. taking the stem of an arborescent bryozoan into its mouth for consumption..
Lower right: A small undescribed Thecacera sp. distends its head to reach forward in attacking a small bryozoan colony. 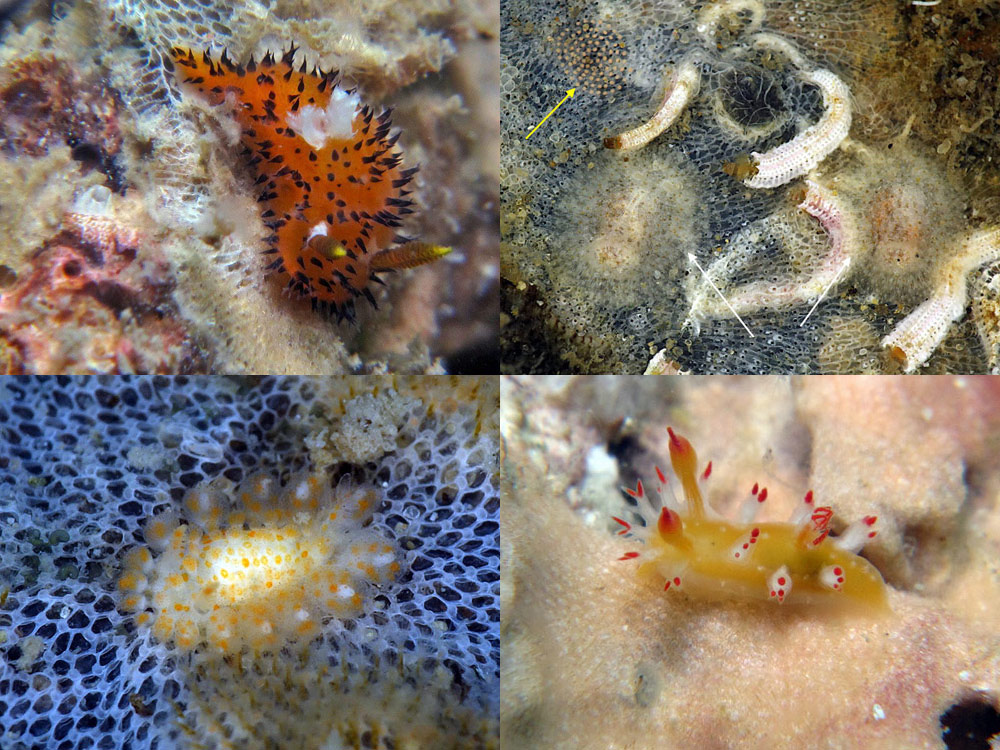 A composite image of four nudibranchs on their encrusting bryozoan prey.
Upper left: The small polycerid Crimora edwardsi feeding on bryozoans on the under side of a rock.
Upper right: Difficult to see unless you know what to look for, the very small and semi-transparent onchidorid, Knoutsodonta maugeansis is well camouflaged on its bryozoan prey. Here, two are indicated by white arrows while the tell-tale egg spiral of the nudibranch is indicated by the yellow arrow.
Lower left: The distinctive polycerid, Limacia ornata has consumed many of the zooids in this colony of encrusting bryozoans. Remaining live zooids can be seen below the nudibranch as a fuzzy mass.
Lower right: Kaloplocamus acutus of the Polyceridae family has found encrusting bryozoans to feed upon on the underside of an old coral plate. 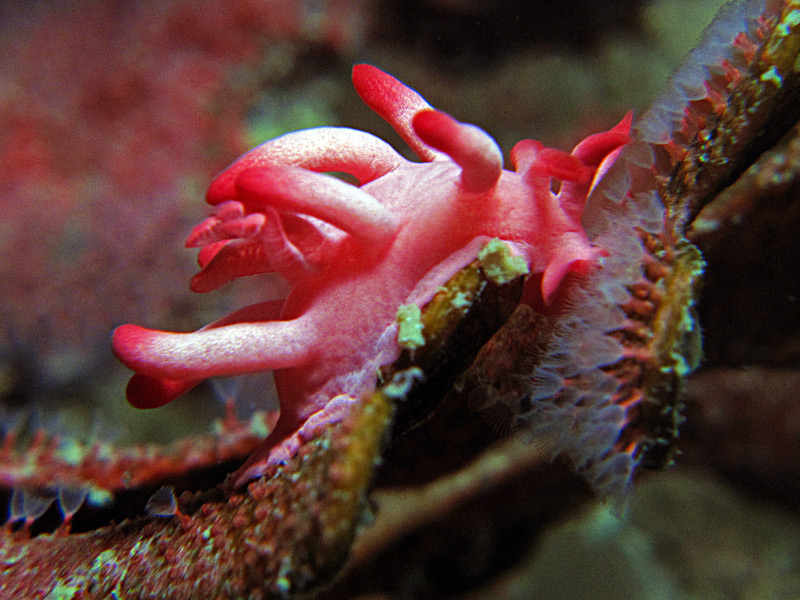 The Goniodorididae species Okenia hallucigenia feeding on the bryozoan Pleurotoichus clathratus. The nudibranch is working its way up the “stem” of the bryozoan virtually “mowing down” the zooids as it goes. In its track only the odd bryozoan zooid can be seen remaining behind. Many if not most Okenia prey upon bryozoans.

Also in the Arminina of the cladobranchs, the family Janolidae (e.g. Janolus), family Proctonotidae (e.g. Caldukia) and family Madrellidae (e.g. Madrella) are well known consumers of bryozoans. Of those mentioned, the Janolus feed upon arborescent forms whilst the Madrella feed on the encrusting types. 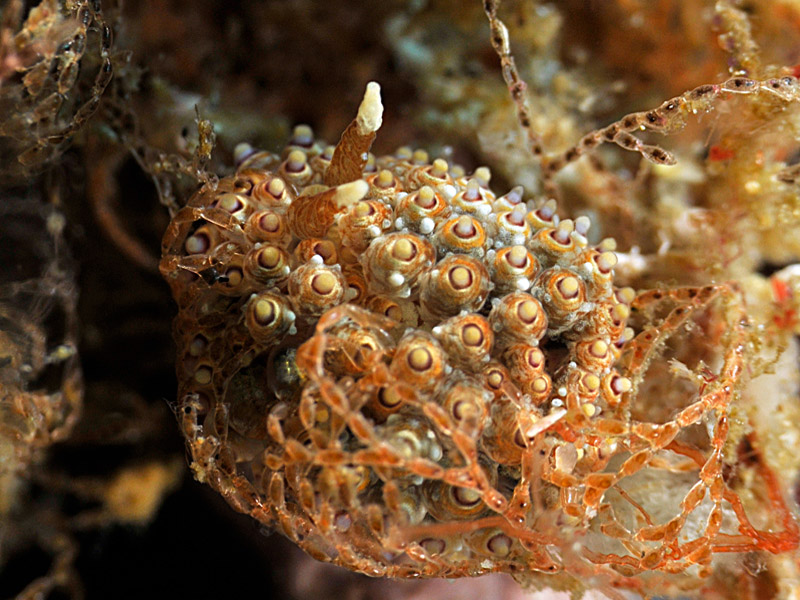 An undescribed Janolus sp. moving through and eating the zooids of an arborescent bryozoan. 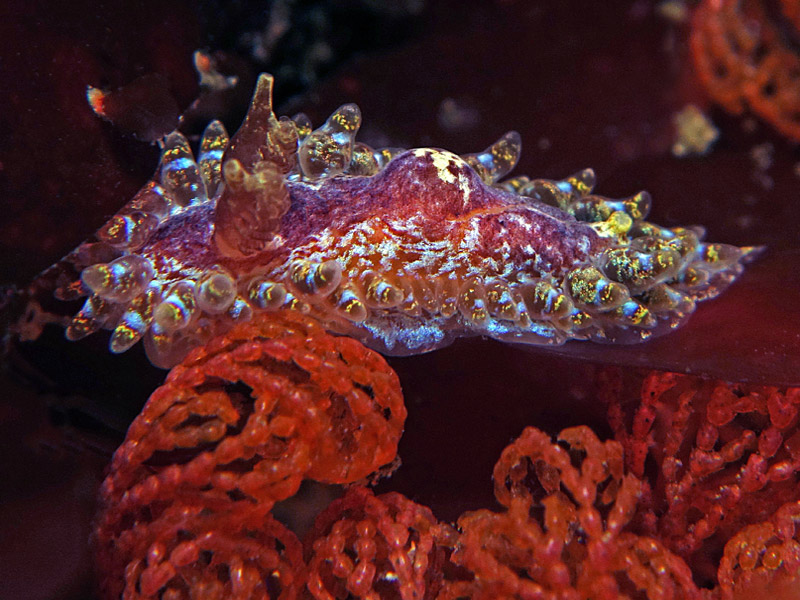 An undescribed species of Calduka amongst its bryozoan food. 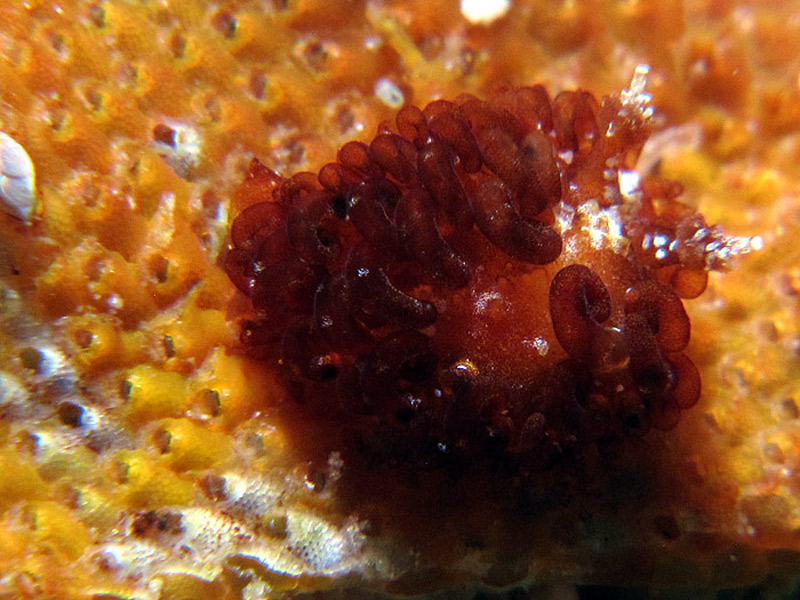 Entoprocts
It was long thought that species of Trapania fed on sponges, having always been sighted thereon, however closer investigation revealed that what they were actually consuming was a totally different organism that lives in association with the sponges – the entoprocts (you might sometimes see them called kamptozoans). Entoprocts are tiny filter-feeding animals that resemble hydroids, superficially anyway, and because of their perceived similarity both as adult and larvae to the bryozoans were originally classified as such. They are now classified in their own phylum the Entoprocta. The adults are sessile dwellers attached to the substrate or living epizooically on other invertebrates and most are colonial. Reproduction is sexual and the eggs hatch into planktonic larvae but all can also reproduce by cloning. This brings us to those most often seen in association with sponges. Unless you are looking for them they can be difficult to see. A fuzzy appearance to the surface of a sponge can be an indication of their presence. 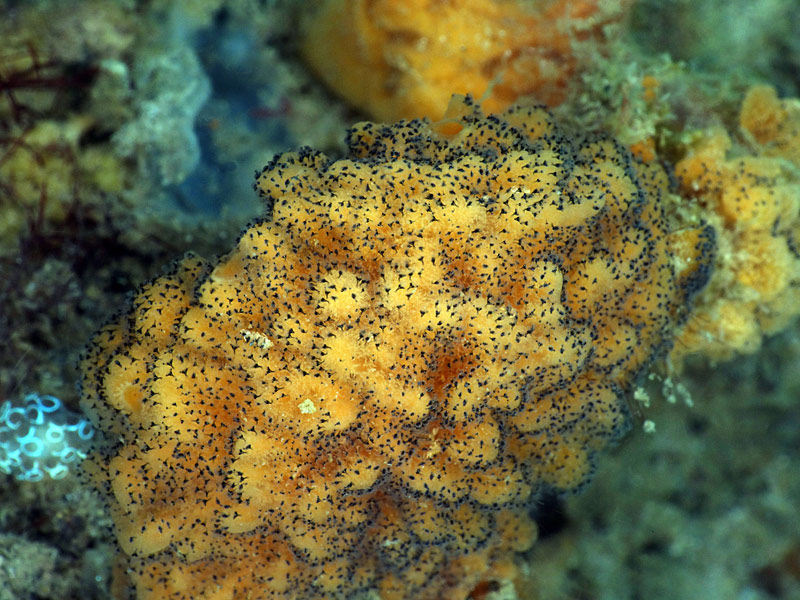 A colony of commensal entoprocts on a sponge. Often they are more difficult to discern than this example. 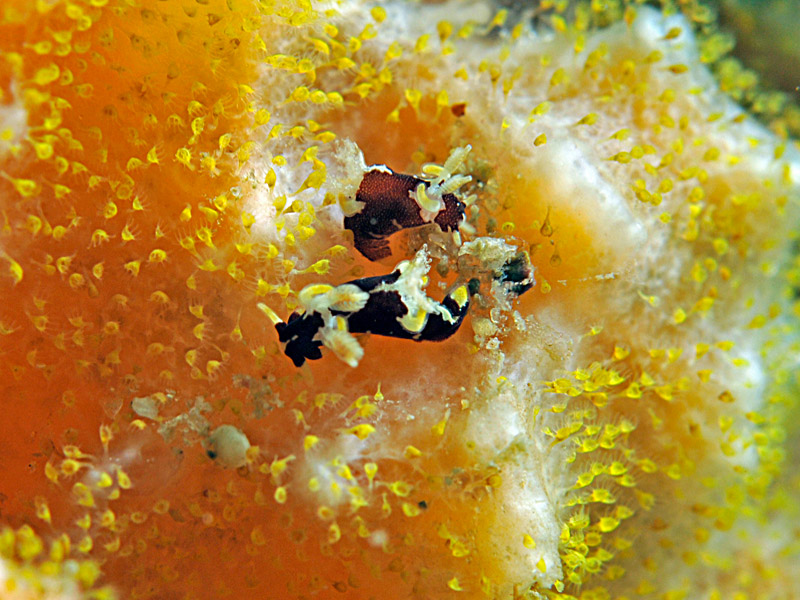 Two Trapania brunnea enjoying a bonanza of entoprocts, looking like a field of daffodils, growing over the surface of a sponge. All species of the genus Trapania prey on entoprocts only. 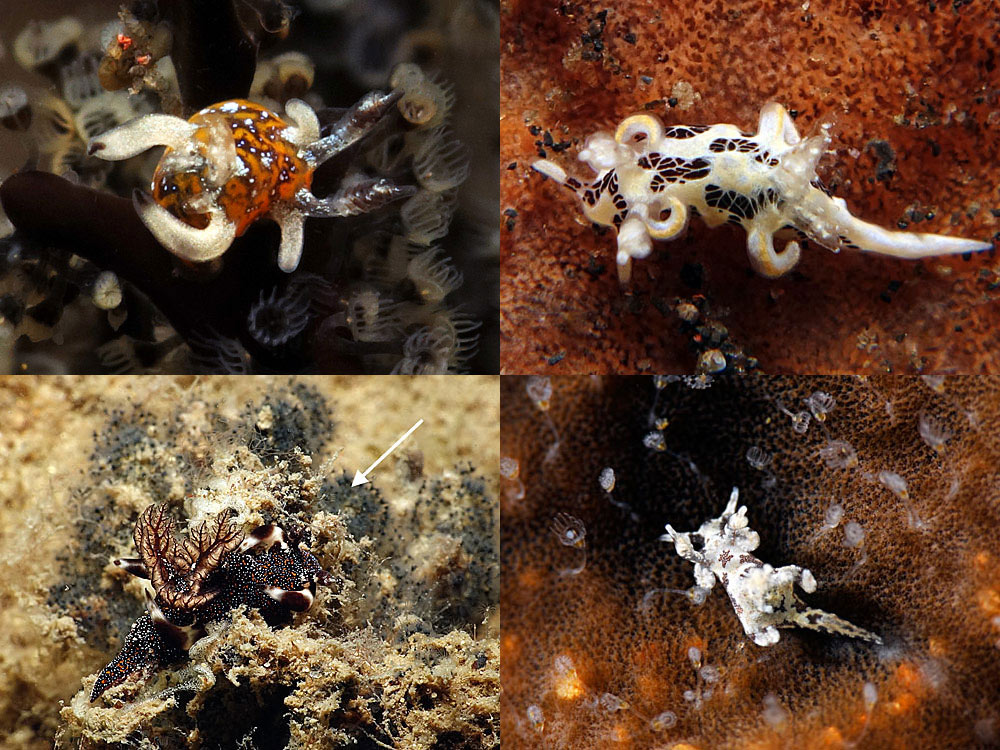 Entoprocts live a commensal existence on sponges. Here a composite image shows four species of the Trapania genus preying on them.
Upper left: A very small Trapania miltabrancha making a meal of some entoproct zooids that are not much smaller than itself.
Upper right: Trapania tora cruises across the surface of a sponge picking off the stalks and heads of the protruding entoproct zooids.
Lower left: Trapania miltabrancha (a different colour form) laying its spawn on a patch of sponge it has eaten clean of entoprocts. Unconsumed entoprocts can be seen as a fuzzy black-spotted region (arrowed) ahead of the nudibranch.
Lower right: Trapania toddi preying on the stalked zooids of an entoproct colony living in association with a sponge. 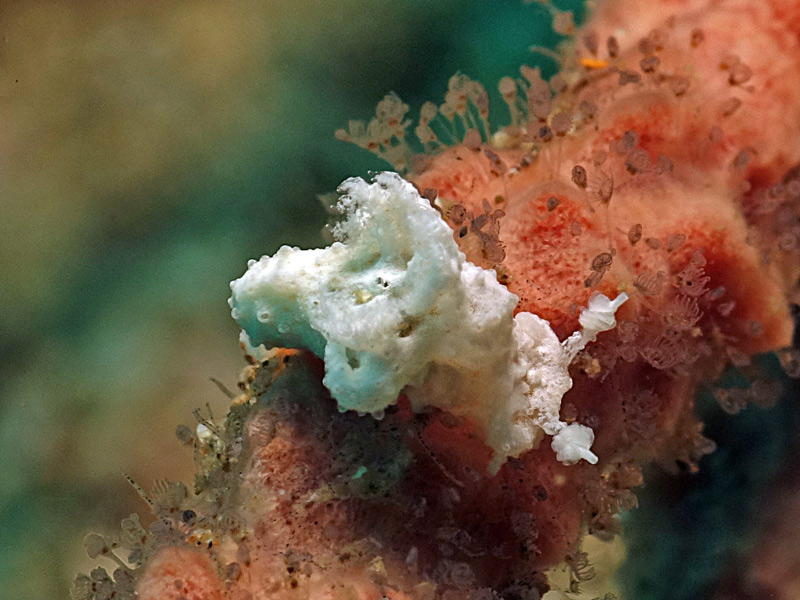 An undescribed species of Trapania grazing upon entoprocts growing on the surface of an orange finger sponge.

Species of entoprocts are believed to be the sole prey of the phanerobranch genus Trapania, relatively small members of the family Goniodorididae, of the Nudibranchia.

– This NudiNote has been modified from a previously published article in Dive Log Magazine’s – NudiNotes Column, Issue: #389 (August 2021): 44-45 by David A. Mullins.